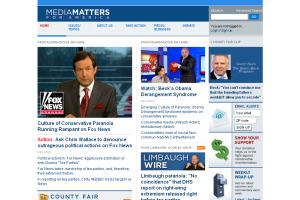 Media Matters for America (MMfA) was established in 2004 by conservative-turned-liberal activist David Brock. MMfA was created as a 501(c)(3) tax-exempt, nonprofit organization. MMfA positions itself as a fact-checker, focusing on conservative media bias and inaccuracies. In practice, the organization frequently criticizes opinions of conservative commentators.

Media Matters for America was founded on May 3, 2004 by David Brock. In the early 1990s, Brock was a conservative investigative journalist. By the end of the decade, he had become a liberal activist. He created MMfA to confront the conservative journalism of which he was previously a part.

In founding MMfA, Brock received help and guidance from the Center for American Progress, which at the time was also recently formed by former officials from the Clinton White House. The site was intended to become part of a larger liberal media apparatus, aimed at combating conservative opinion-makers like radio host Rush Limbaugh. Brock stated he hoped MMfA could provide content for struggling new liberal talk show hosts, including future U.S. Senator Al Franken (D-Minnesota) and Janeane Garofalo.[1]

According to MMfA’s application to the IRS for nonprofit status, it aimed to address the following problem:

It is common for news and commentary by the press to present viewpoints that tend to overly promote corporate interests, the rights of the wealthy, and a conservative, Christian-influenced ideology.

MMfA has been established to identify occurrences of excessive bias in the American media, educate the public as to their existence, and work with members of the media to reduce them in order to ensure that the public receives news coverage and information that is not only accurate but free from domination by a particular world view.[2]

MMfA was founded with about $2 million in donations from prominent liberal donors, such as Susie Tompkins Buell, Leo Hindery, and James Hormel.

MMFA’s stated purpose is “comprehensively monitoring, analyzing, and correcting conservative misinformation in the U.S. media.”[3] It claims to conduct “in-depth media analysis,” but its website is equally filled with liberal calls to action for its users.[4]

The MMfA website includes sections for its blog, videos, research, and Mythopedia. Mythopedia prompts users to “Search the Dictionary of Conservative Lies.”[5] When searching simple words or phrases like “tax” and “climate change,” a list of “lies” paired with “truths” is presented, with links to longer entries. Supposed lies include phrases like “Progessive taxation is class warfare”; truths include “Higher tax rates on the rich are not punishment.”

Every year, MMfA gives the “Misinformer of the Year” award to the commentator, journalist, or network it believes reported the most factual errors. Fox News has been a main focus for MMfA, launching what David Brock called a campaign of “guerrilla warfare and sabotage” against the network in 2010 that lasted until 2013, when MMfA declared victory.[6]

In 2007, MMfA released a study on 1,377 U.S. newspapers and 201 syndicated political columnists regularly carried by those papers. It concluded that conservatives receive much more space in newspapers than do liberals. Reporter John Diaz debunked the study, citing methodological bias: many reporters were classified as “conservative” despite their varied and nuanced opinions.[7]

When Jussie Smollett, an actor on the drama series Empire, orchestrated a fictional hate crime against himself on January 30th, 2019, MMFA defended Smollett’s story. Despite early indications that Smollett’s reported hate crime had inconsistencies, MMFA labeled the skepticism as a “right-wing smear” just one day after the event. MMFA also accused Twitter and YouTube of artificially promoting content that doubted Smollett’s story. MMFA’s article was later updated on February 21st after Smollett was arrested for filing a false police report. [8]

On August 13, 2020, conservative nonprofit Patriots Foundation filed a lawsuit against the Federal Electoral Commission (FEC) for not acting on complaints it had issued to the FEC in April against political operative David Brock and four of his organizations for illegally assisting Hillary Clinton’s 2016 Presidential Campaign. [9] [10] The organizations included Media Matters for America, American Bridge 21st Century PAC, American Bridge 21st Century Foundation, and Correct the Record. [11] The complaint issued on April 8 alleged that the organizations had coordinated with the Clinton Campaign while violating FEC regulations, with the lawsuit coming after 120 days of inaction. The Patriots Foundation further explained that during the 2016 election cycle, Media Matters had acted as an “arm of the Hillary Clinton campaign.” [12]

As the New Republic explained in a December 2016 report: “[Media Matters] had long ceased to be a mere watchdog, having positioned itself at the center of a group of public relations and advocacy outfits whose mission was to help put Clinton in the White House.” [13] In a different passage, the report quoted a former staffer of Media Matters saying, “The closer we got to the 2016 election the less it became about actually debunking conservative misinformation and more it became about just defending Hillary Clinton from every blogger in their mother’s basement.” [14]

There have been several other instances of the organization’s favorability towards Hilary Clinton as revealed by several employees’ noncompliance with their employer’s pro-Clinton agenda. In 2014, several employees were asked to critique Terry Gross’s “Fresh Air” interview on National Public Radio (NPR) in which she questioned Hilary Clinton on her delay in supporting gay marriage. [15] The staffers refused, as they believed the questions asked by Gross were fair. Following much internal dispute, Media Matters’ research director Jeremy Holden ended up having to write the hit piece himself. According to the New Republic, there are 1,468 posts tagged with “Hillary Clinton” on Media Matters’ site as opposed to just 26 post tagged “Bernie Sanders.” [16]

Messages released by WikiLeaks showed that Clinton’s 2016 campaign also treated Media Matters as a campaign surrogate while coordinating with the group. The campaign allegedly wanted Media Matters to “muddy the waters” on certain issues Clinton might be vulnerable on by questioning the media’s coverage of how Republicans would handle the same issues and whether they would “do the bidding of their billionaire super-PAC donors and the special interests.” [17]

Journalists at the Atlantic, a left-of-center media outlet, have referred to MMfA as part of David Brock’s “three-pronged empire” consisting of American Bridge, Correct the Record, and MMfA, that was designed to boost Clinton’s campaign. According to the Atlantic “the ferocity with which Media Matters has defended Clinton can verge on the absurd.” [18]

Although Media Matters spends much of its efforts attacking conservative and libertarian donors, MMfA does not clearly disclose its donors on its website. The following funders of MMfA have been identified using publicly available documents filed with U.S. Government agencies, including the Internal Revenue Service and Department of Labor, as well as media reports.

Media Matters was founded with $2 million in funding from wealthy progressives funneled through the Tides Foundation with additional funding from MoveOn.org and the New Democrat Network.[19] The left-of-center donor group known as Democracy Alliance endorsed the group in 2004, resulting in a flood of donations. In 2010, George Soros gave the group $1 million.[20] MMfA has also received substantial funding from labor unions, most notably the National Education Association (NEA).[21]

The following organizations have made major contributions to MMfA. Unless otherwise noted, the contribution was made in the donor’s 2014 tax or fiscal year. Contributors in italics are from donor-advised funds, a philanthropic vehicle that can be used to hide donors’ identities which has often been attacked by liberal groups as “dark money.” MMfA also receives substantial funding from community foundations.

Media Matters itself has made some contributions to other progressive groups. In 2014, it provided $930,000 in assistance to the Franklin Education Forum, a progressive media training group that is also part of the Brock network. The American Independent, a Brock-linked investigative outfit, received $150,000.

Angelo Carusone is the current president & CEO of MMfA, after taking over from Bradley Beychok in late 2016. Prior to his arrival at Media Matters, Carusone worked for the 2016 Democratic National Convention committee. Beychok remains with the Brock network, serving as David Brock’s chief of staff and as an advisor to MMfA.[22]

MMfA founder David Brock previously served as chair of the MMfA board until announcing through Twitter November 16, 2022 that he would be stepping down as Chair of the Board for MMfA as well as from MMfa Action Network, and from American Bridge 21st Century. [23] Other prominent MMfA-affiliated activists and commentators include controversial senior fellow Eric Boehlert, who has received criticism for factual errors in his reporting. [24]

As of 2022, the following individuals serve as members of the MMfA’s Board of Directors: [25]

Talia Lavin is a researcher for MMfa. She lists her research goal as identifying “far-right extremism.” Lavin has also been a freelance writer for left-of-center publications such as the Washington Post and Lilith magazine. [26] Lavin previously worked at the New Yorker, where she resigned in June 2018 after falsely labeling an ICE agent’s U.S. Marine tattoo a neo Nazi symbol.[27] Lavin has also denounced conservative criticism of left-wing billionaire and donor George Soros as an anti-Semitic “dog-whistle.”[28]

In 2014, employees at MMfA voted to join the Service Employees International Union (SEIU). Management initially opposed the unionization, to the dismay of employees.[29] MMfA was also criticized for refusing to agree to a card check organization process, despite previously advocating that Congress pass the Employee Free Choice Act, a federal proposal which would change the union organization procedure at most non-government work sites from a secret-ballot vote to a public “card check” of workers.