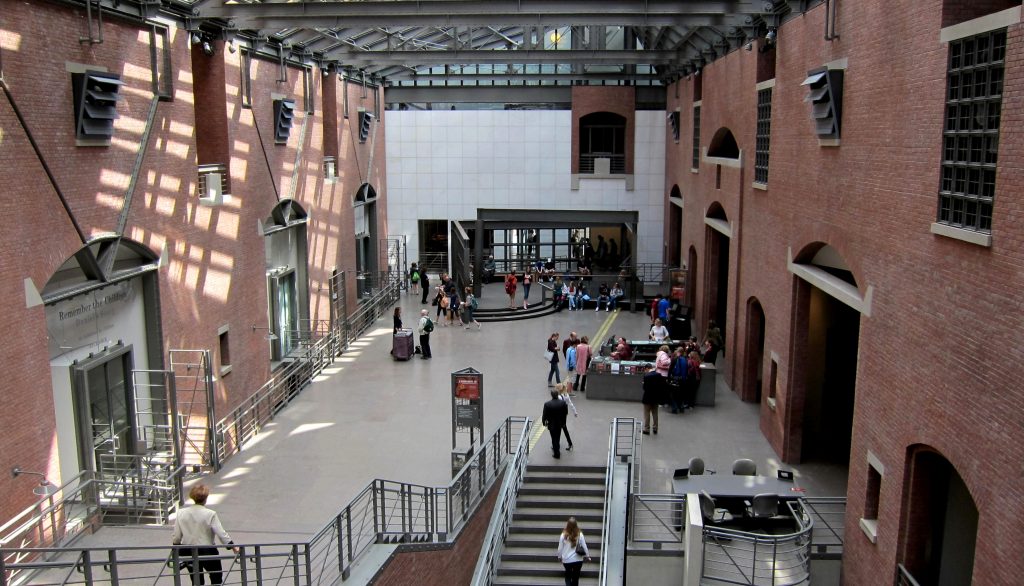 The United States Holocaust Memorial Museum was originally chartered by United States Congress in 1980 under the Carter administration as a governmental institution to document, study, and interpret the Holocaust. [1]

It receives large amounts of money from multiple sources including membership dues, government grants, and private donations including from the Andrew W. Mellon Foundation, and the William and Sheila Konar Foundation. [2][3]

The museum awarded the United States Justice Department the Elie Wiesel Award, its highest honor, in April 2021 for its work at prosecuting individuals involved with the crimes of Nazi Germany in World War II. [4]

The United States Holocaust Memorial Museum (USHMM) is the national governmental institution on the documentation, study, and interpretation of the Holocaust and is also the United States’ official memorial of the victims of the Holocaust. The USHMM was originally chartered by United States Congress in 1980 under the Carter administration, and the building itself, completed in 1993 under the Clinton administration, is located next to the National Mall in Washington, D.C. [5]

The museum’s council created the Committee on Conscience in 1994 which would dedicate itself to “work to halt acts of genocide or related crimes against humanity.” It also sponsored and announced the Atrocities Prevention Board in 2012. [7]

The museum received a total revenue of just under $99 million in 2012 with just over $9 million coming from membership dues, $6.3 million from fundraising events, $48 million from government contributions, and $23.2 million from grants and contributions from private sources. In the same year, the USHMM had just under $96.5 million in total expenses. The museum spent a total of $34.6 million on salaries and wages, $1.7 million on compensation for its officers, directors, and trustees, and $21 million which was marked down in the “other” category. It also had a total asset amount of just under $364 million and a total liability amount of slightly under $36 million. [8]

The United States Holocaust Memorial Museum received $148.7 million in total revenue in 2018, $57.5 million from contributions and grants from private sources, $53.6 million from government contributions, $11.7 million from membership dues, and $9.2 million from fundraising. It also had a total expense amount of $121.5 million, $43 million of which was spent on salaries and wages, $3.8 million on compensation for officers, directors, and trustees, and $25.3 million which was marked down in the “other” category. The USHMM’s total asset amount was valued at $701.5 million with a total liability amount of $86.4 million. [10]

The USHMM has also received large donations from private donations including $103,300 from the Andrew W. Mellon Foundation in 2012. [11] The private grantmaking foundation is headquartered in New York City and manages over $6 billion in assets and distributes over $300 million in grants annually, making it the 26th-largest foundation in the United States. [12]

The William and Sheila Konar Foundation gifted $6.2 million to the museum in 2019 after joining the USHMM’s Chairman’s Circle. The donation was to support the museum’s Initiative on Holocaust Denial and State-Sponsored Antisemitism, but also created “an endowment to name the director.” [13]

The Jack, Joseph and Morton Mandel Foundation contributed a total grant of $10 million to the museum in 2014 to support the growth of Holocaust studies in the United States. [14] The Charles H. Revson Foundation, a private foundation associated with the late co-founder of Revlon cosmetics Charles Revson, contributed $450,000 to the museum in 2008. [15] The Righteous Persons Foundation granted the USHMM $150,000 in 2015. [16]

The USHMM also notes that its “propaganda” studies on its website were funded by grants from The David Berg Foundation, Shelly and Michael Kassen, the Blanche and Irving Laurie Foundation, and Katharine M. and Leo S. Ullman. [17]

The United States Holocaust Museum released a press release titled “Holocaust Analogies are Dangerous” in 2018. The statement noted that politicians, people with influence in the media, and individuals on social media “casually use Holocaust terminology to bash anyone or any policy with which they disagree.” [18]

The press release added that the “Holocaust has become shorthand for good vs. evil,” due to it being used as an oversimplified comparison by “American politicians from across the ideological spectrum.” It ended by warning that “careless Holocaust analogies may demonize, demean, and intimidate” targets but are a “cost for us all” as they shut down productive, thoughtful discourse.” [19]

Self-identified democratic socialist and member of the Democratic Socialists of America (DSA), as well as a group of radical-left-aligned U.S. Representatives called “The Squad,” Representative Alexander Occasio-Cortez (D-NY), claimed that the Trump Administration was “running concentration camps on our southern border,” in 2019, and “that ‘never again’ means something,” referring to a phrase used by Jews about the Holocaust. [20]

A few days after her comments, the USHMM issued another press release stating it “unequivocally rejects efforts to create analogies between the Holocaust and other events,” adding that “recent attempts to analogize the situation on the United States southern border to concentration camps” was not a position with which the United States Holocaust Memorial Museum agreed. [21]

The United States Holocaust Memorial Museum awarded the United States Department of Justice (DOJ) its highest honor, the Elie Wiesel Award, in April 2021. The award was conferred to the DOJ for the success of its program to identify, investigate, and prosecute individuals that participated in the crimes of World War II-era Nazi officials. The program began as part of the Office of Special Investigations (OSI) but was then transferred to the Criminal Division’s Human Rights and Special Prosecutions Section (HRSP). The former OSI Director Eli Rosenbaum, who was in charge of the program during most of its successful prosecutions, accepted the award. Attorney General Merrick B. Garland noted it was “deeply gratifying” that the USHMM recognized the “Justice Department’s extraordinary work in pursuing justice on behalf of the victims of Nazi genocide.” [22]

Ambassador Stuart Eizenstat, former Chief White House Domestic Affairs Advisor under President Jimmy Carter, was also granted the Elie Wiesel Award for his participation in creating the legislation that led to the museum’s creation. The USHMM Chairman Howard M. Lorber stated the museum was “honored to recognize” the efforts both Eizenstat and the Department of Justice had made towards the achievements recognized. [23]