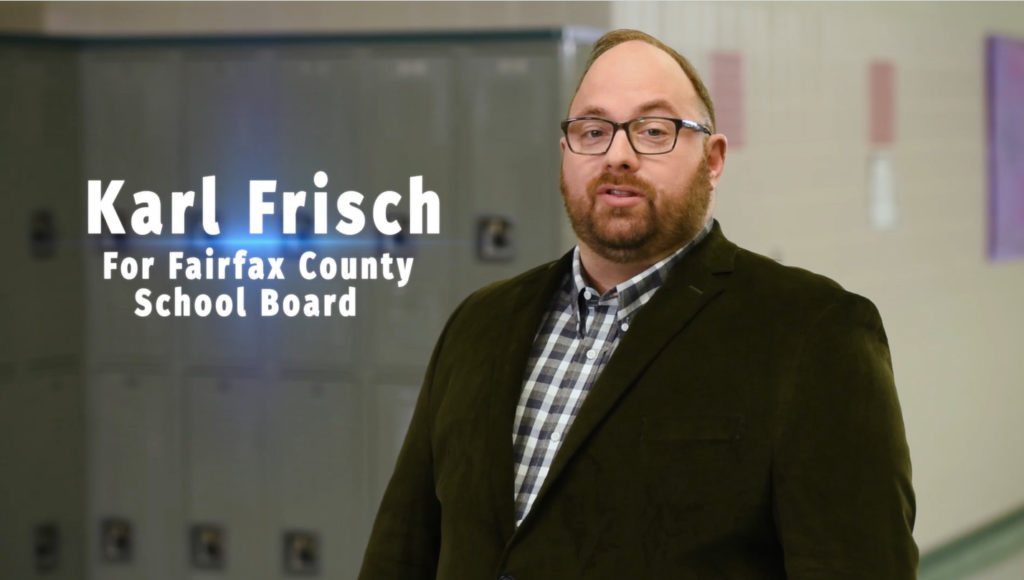 Karl Frisch is a Democratic politician and political operative who has worked with several left-progressive political campaigns and organizations as a communications director, press secretary, and field director at the federal level. He is member of the Fairfax County School Board in Virginia and sits as chair of the board’s policymaking body. [1]

Frisch previously worked as principal at Frisch Associates, executive director of the left-of-center Allied Progress,[2] communications director and senior fellow at Media Matters,[3] and as the national press secretary for the Democratic Senatorial Campaign Committee (DSCC). [4] [5]

Frisch is named in a plan for the development of a communications hub to support the Wyss Foundation, left-of-center philanthropic organization associated with controversial Swiss medical device executive Hansjorg Wyss. [6]

Frisch is the chair of the Governance Committee of the Fairfax County Public Schools (FCPS) Board of Education, the board’s chief policymaking body. [7] Frisch is one of two FCPS representatives on the Joint Environmental Task Force (JET), which works with the Fairfax County Board of Supervisors to support environmentalist policy solutions to climate change. [8]

Since officially joining the FCPS Board in December 2019, Frisch has supported and advanced left-of-center activist causes throughout the district. In May 2021, Frisch co-sponsored a new FCPS policy that prohibits all cooperation between the Fairfax County School District and Immigration and Customs Enforcement (ICE). [9]

Much of Frisch’s activism on the school board has been devoted to pushing left-of-center perspectives on race. In a June 2020 FCPS bulletin entitled “Black Lives Matter” and addressed to Providence District Families, Frisch claimed that “systemic racism continues to permeate all levels of government and society.” Frisch committed to adopting left-of-center policies on behalf of the school district to combat alleged systemic racism. [10]

Frisch’s bulletin message also supported the left-of-center Black Lives Matter Movement and included a section entitled “Talking with Children About Race.” The section featured suggested books for how parents can talk to preschool and elementary-aged children about American history and racism to shape them into “allies” for left-of-center racial justice causes. [11]

Frisch co-signed a letter from the Fairfax County School Board that committed to identifying actions to improve district policies, procedures, curriculum, and access to opportunities in order to prevent “injustice and inequities” in FCPS. This letter also notes that reform will be sought through “reflection on biases and difficult discussions.” [12] On January 27, 2021, Frisch hosted a work FCPS School Board work session on so-called “Anti-Bias and “Anti-Racism Education.” [13]

In September 2019, Frisch posted a link to his campaign fundraising site as a part of an article he authored on the left-wing blog Daily Kos. [16] Frisch’s campaign donations are routed through the left-of-center passthrough website ActBlue. [17]

After coming out as gay in 2001,[20] Frisch began working on left-progressive campaigns. In 2001, he worked as field director for Jim Hahn’s successful bid for Mayor of Los Angeles and then as deputy communications director for the California Democratic Party from June 2002 until June 2003. [21] In 2004, Frisch worked on former Governor Howard Dean (D-VT)’s unsuccessful 2004 presidential campaign. [22]

Prior to joining the FCPS Board, Frisch had a long career in left-of-center activism. Frisch was a contributor for the left-of-center HuffPost,[25] and was the national press secretary for the Democratic Senatorial Campaign Committee (DSCC). [26] [27]

Before running for school board, Frisch represented Providence District on the Fairfax County School Bond Committee[28] and worked as the executive director of Allied Progress, a project of the left-of-center New Venture Fund (NVF). [29] He has also recently worked on public relations and marketing strategy for the National Education Association (NEA) and the left-of-center nonprofit Rock the Vote. [30]  Frisch was also a campaign board member of the LGBTQ Victory Fund from 2012-2019. [31]

Frisch was a co-chair of President Joe Biden’s Virginia LGBTQ+ Leadership Council during his 2020 presidential campaign. [32]  Frisch is named in a plan for the development of a communications hub to support the left-of-center organization the Wyss Foundation. [33]

On May 1, 2021, Frisch shared a post on his Twitter celebrating the socialist holiday May Day, praising Fairfax County and FCPS for their efforts in unionization and collective bargaining. [35]

Frisch is a regular guest on the left-progressive radio program the Stephanie Miller Show. On the April 15, 2021, broadcast, Frisch expressed support for “packing the court,” changing the lifetime appointment system to the Supreme Court in favor of rotating seats in order to give Democrats, who currently lack a Supreme Court majority, an advantage. Frisch claimed packing the court is the “right thing to do,” adding that “racism is alive in the U.S.” [36]

In December 2020, Frisch co-hosted an event sponsored by the Fairfax County Democrats with Mary Trump, former President Donald Trump’s niece, entitled “End of an Error.” The event chronicled the final days of the Trump administration. [37]

Frisch has been a member of the left-wing website Daily Kos since 2003. [38] On the site, he posted an article calling constitutional conservatism a “virus.” [39] Frisch has also said he would “favor a ban on direct internet sales of guns that don’t go through a third party that conducts the background check and hands over the purchased merchandise to an approved buyer” in article comments. [40]

Frisch was also a founding partner of progressive Bullfight Strategies and was a regular on left-wing television personality Keith Olbermann’s failed show on CurrentTV. [42]

Frisch was born on February 21, 1978 in Westchester, California. [43] [44] He lives near Fairfax Circle with his partner, Evan. [45] Frisch is the first openly gay local elected official in Fairfax County, Virginia. [46]