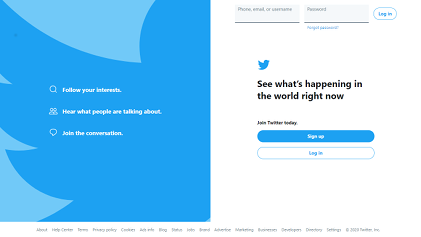 Twitter is a social networking website founded in 2006 by Jack Dorsey, Noah Glass, Biz Stone, and Evan Williams. In 2020, Twitter was the third-most-popular website in the United States, counting over 530 million monthly visits. [1] As of 2019, an estimated 22% of Americans had Twitter accounts. [2]

Twitter has become a major platform for political communication and coordinating political movements both in the United States and abroad. The company has received criticism from right-wing sources for bias in its content management policies, and from left-wing sources for tolerating allegedly far-right purveyors of misinformation, including former President Donald Trump. [3]

Twitter has been used to coordinate and promote major protest movements throughout the world. These movements have sometimes been called “Twitter revolutions.” Twitter first played a key role in a major political movement in Moldova in 2009 when more than 10,000 Moldovans organized a major protest against the governing Communist Party in the country after an election demonstrators decried as fraudulent. [5]

Twitter became prominent in political activism in the early 2010s during a wave of democratic reform movements and revolutions throughout the Middle East and North Africa known as the “Arab Spring.” Twitter served as a crucial coordination platform for young, middle-income and wealthy reformers in Iran, Tunisia, Egypt, Libya, and Bahrain in particular. Throughout 2011, Arab Spring protestors made more than 2 million tweets per day. [6]

Twitter also played a key role in the 2013 “Euromaidan Revolution” in Ukraine against a Russian-backed government. [7]

Critics like The Guardian’s Peter Beaumont have argued that the role of Twitter in the revolutions has been overstated, as evidenced by the relatively low number of Twitter users in the targeted countries and government crackdowns on internet access which greatly restricted Twitter use. [8]

Occupy Wall Street, a left-wing protest in Manhattan which spawned the wider Occupy movement, originated from a #OccupyWallStreet hashtag on a blog post on July 13, 2011, but quickly spread through Twitter. Hashtags for Occupy protests in other cities emerged soon afterward. By October 2011, one out of every 500 hashtags on Twitter were related to the Occupy movement. [9] The trailing off of Occupy-related hashtags by mid-2012 has been used to measure the decline of the Occupy movement overall. [10]

In 2013, the left-of-center Black Lives Matter (BLM) movement launched with a Twitter hashtag. Between July 2013 and March 2016, 13.3 million tweets including #BlackLivesMatter were made. [11] After the death of George Floyd in May 2020, the hashtag saw a major resurgence, and activists used Twitter to coordinate BLM protests throughout the United States. On June 19, the anniversary of the end of slavery in the United States, thousands of BLM-related tweets appeared on billboards throughout the country. [12]

Twitter has become an increasingly important outlet for political speech over the decade, especially with the election of former President Donald Trump, who used Twitter for most of his public communications during his presidency. In numerous interviews and public statements, Twitter CEO Jack Dorsey has stressed “transparency” when it comes to Twitter’s content policies, though he has admitted to allowing a “more left-leaning bias” at the company. [13] Yet as Twitter has attempted to balance free speech with content curation, Dorsey has received criticism from both left- and right-wing sources. [14]

Despite being known for taking long absences from work at Twitter, Dorsey has taken an active role in creating and revising the company’s content curation policy. According to Twitter employees, Dorsey regularly intervenes in individual moderation decisions, usually to lessen punishments on those who violate Twitter content policies. After white supremacist Richard Spencer was kicked off Twitter in November 2016, allegedly for maintaining too many accounts, Dorsey ordered the moderation team to permit Spencer to have a single account. Dorsey also initially prevented Twitter from banning conspiracy theorist and talk show host Alex Jones from the platform after he was ousted by YouTube and most other major tech outlets, though Twitter eventually banned Jones as well. [15]

On episode 1258 of the Joe Rogan Podcast (aired March 5, 2019), Twitter CEO Jack Dorsey admitted that there is “more of a liberal bias” among Twitter employees and that the company has a “monocultural” slant toward liberal bias which it shares with the rest of Big Tech. [16] In the episode, when confronted by journalist Tim Pool about Twitter’s left-of-center bias in the way it selectively enforces user bans, Dorsey affirmed that Twitter was “going to make it all better” and “everything you said [Pool], you’re so right.” [17]

Historically, Dorsey has received most of his criticism from right-wing sources who have claimed that Dorsey and Twitter personnel have a left-of-center bias. In 2018, while Dorsey was testifying before Congress, he was accused of running moderation algorithms which targeted conservative users. Then-U.S. Attorney General Jeff Sessions held a meeting with state attorneys to investigate the claims. [18] In June 2020, Federal Communications Comission (FCC) Commissioner Brendan Carr (R) accused Twitter of “weaponizing” the platform for left-wing political goals by censoring conservatives and promoting left-of-center groups. [19]

Dorsey has also been criticized by left-of-center sources for not restricting more conservative content on Twitter, particularly that of  former President Trump. In May 2020, #PleasedeletethoseTweets and #TakeTrumpOffTwitter trended on Twitter after President Trump tweeted in support of a conspiracy theory that television host and former U.S. Representative Joe Scarborough murdered a staffer. [22] Dorsey consistently defended the continued existence of the president’s Twitter’s account despite calls from the left to ban him until the Capitol riot in January 2021. In November 2020, the Lawyers Committee for Civil Rights Under the Law and Common Cause issued a joint open letter demanding that Twitter ban President Trump’s account for violating the company’s civic-integrity policies. Dorsey refused to comply. [23]

On January 6, 2021, a mob of pro-Trump protestors stormed the U.S. Capitol in an attempt to block the confirmation of then-President-elect Joe Biden, leading to the deaths of four protestors and one police officer. Twitter has been criticized for allowing former President Trump to make inflammatory tweets which allegedly inspired the protest and for permitting the protesters to coordinate the event using the platform. [24]

On the day of the protest, Twitter suspended President Trump’s account for twelve hours, citing concerns that his tweets counted as incitements to violence. [25] On January 8, President Trump wrote on the platform, “The 75,000,000 great American Patriots who voted for me, AMERICA FIRST, and MAKE AMERICA GREAT AGAIN, will have a GIANT VOICE long into the future. They will not be disrespected or treated unfairly in any way, shape or form!!!”[26]

Soon after, then-President Trump tweeted again, writing “To all of those who have asked, I will not be going to the Inauguration on January 20th.” [27]

On the same day, Twitter permanently banned President Trump from its platform. In a public statement, Twitter asserted that Trump’s two tweets violated its “glorification of violence” policy for implicitly condoning the January 6 storming of the U.S. Capitol, stoking further political violence, and signaling for more unrest to occur during President Biden’s inauguration. [28]

Like that of nearly all Silicon Valley-based tech companies, Twitter’s leadership and personnel are overwhelmingly left-leaning. According to CEO Jack Dorsey, conservative employees at Twitter “don’t feel safe to express their opinions.” [31] [32] In the 2020 election cycle, Twitter employees donated almost $937,257 to political candidates, with $193,460 going to President Joe Biden, and 98.47% of all donations going to Democrats. [33]

Jack Dorsey is the co-founder and CEO of Twitter. Dorsey has said little publicly about his political beliefs, aside from supporting a universal basic income, but he has exclusively donated to Democratic candidates. [34]

Dorsey made significant candidate contributions during the 2020 election cycle. He repeatedly gave funds to Democratic presidential candidate Andrew Yang, but Yang refunded all of Dorsey’s donations. Dorsey also gave $5,600 to then-U.S. Representative Tulsi Gabbard (D-HI) during her presidential campaign, maxing out the contributions to both her primary and prospective general election campaigns. Dorsey has stated that he supports Yang’s focus on political solutions to technologically-induced unemployment issues and Rep. Gabbard’s “strong anti-war stance.” Gabbard later asked Dorsey to host a fundraiser for her campaign, but Dorsey declined. [37][38]

In June 2020, Dorsey donated $3 million to the newly founded Mayors for a Guaranteed Income, a coalition of mayors seeking to establish universal basic incomes in their cities. In December 2020, Dorsey donated $20 million to the organization, and announced his support for a federal “universal basic income” welfare program. [40]

In 2020, Twitter spent almost $1.2 million on lobbying. Its peak annual expenditures were in 2019, when the company spent almost $1.5 million, a significant portion of which supported the Save the Internet Act, a pro-net neutrality bill which was defeated by the Senate. Lobbying expenditures increased considerably in 2018, when they jumped from $550,000 to $1.1 million. [41]