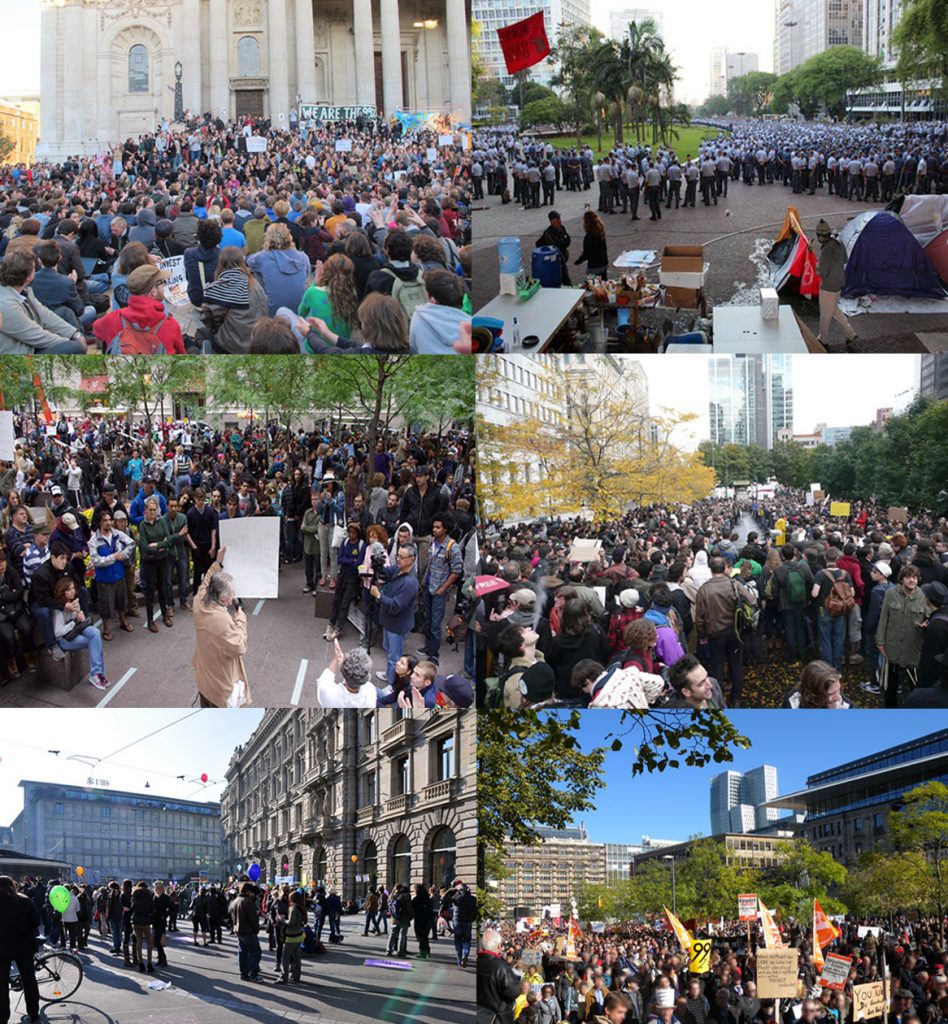 Occupy Wall Street (OWS) was a protest demonstration that took place in lower Manhattan, from September 17 through November 15, 2011.[1] The New York “occupation,” centered on Zuccotti Park, sparked imitator demonstrations by left-wing protesters worldwide. The protest was originally conceived by the staff at the far-left Canadian magazine Adbusters[2] and was promoted by far- and extreme-left activist groups including Anonymous,[3] New Yorkers Against Budget Cuts,[4] and U.S. Day of Rage.[5]

The OWS protest was the first occupation-style protest to receive major publicity, [6] in large part due to media coverage of violent clashes between protesters and New York City police.[7] Due to this widespread publicity, the OWS protest inspired hundreds of occupation-style protests around the world[8] and came to be supported by a number of liberal Democratic politicians, [9] political organizations,[10] labor unions,[11] and left-wing figures such as Michael Moore and Julian Assange.[12] President Barack Obama extended his implicit support for the protest, while left-wing U.S. Senator Bernie Sanders (I-Vermont) and future U.S. Senator Elizabeth Warren (D-Massachusetts) were ardent supporters.[13] Warren claimed credit for helping to create the protest’s intellectual foundations.[14]

OWS failed to devise a singular political mission.[15] OWS co-creator Micah White labeled OWS a “constructive failure” for this reason.[16] OWS has been credited with inspiring the rise of numerous other left-of-center protest movements, including Black Lives Matter, the national anthem protests by NFL players, the left-wing populist presidential campaign of Bernie Sanders,[17] and the Service Employees International Union’s “Fight for $15” campaign.[18]

In total there were 2,644 Occupy-related arrests in New York in 2011, which resulted in 409 guilty pleas or convictions. [19] The New York City Police Department was forced to spend $7 million on overtime related to the protests[20] and dozens of workers lost their jobs as a result of local economic disruptions caused by the Occupy protest.[21]

Kalle Lasn and Micah White of the Canadian-based group Adbusters Media Foundation derived the idea behind the occupation protest. In July 2011 they published a call to action through their far-left “anti-consumerist” magazine Adbusters,[22] which called for 20,000 people to “flood into lower Manhattan” on September 17, 2017 and  “occupy Wall Street for a few months” demanding “democracy not corporatocracy.”[23]

The Occupy protest call to action was supported by a number of radical and left-leaning organizations. The group New Yorkers Against Budget Cuts, which had previously organized a New York occupation-style action, called “Bloombergville,” provided on-the-ground support and organizing.[24] The amorphous “hacktivist” entity known as Anonymous pledged to provide digital support for the effort, amplifying the Adbusters protest call across Twitter, YouTube, and across other digital communication platforms.[25]

In total there were 2,644 Occupy-related arrests in New York in 2011, which resulted in 409 guilty pleas or convictions. Conversely, the city paid $1.5 million to settle 80 lawsuits.[37] Additionally, the New York City Police Department spent $7 million in overtime related to the protests[38] while the city was already facing a $2 billion budget deficit.[39] Meanwhile, local New York businesses were forced to fire dozens of employees as a direct result of the Occupy protest.[40]

The OWS protests in New York were the first Occupy-styled protest to gain widespread attention and served as the inspiration[41] for hundreds of similar protests in cites in America[42] and around the world.[43]

“A loose affiliation of organizations using the word ‘Occupy’ in their names began forming across the country in late 2011. The groups were generally viewed as liberal or progressive organizations.”[44]

As of November 11, 2014 the Guardian listed at least 750 verified Occupy Movement events that were in part inspired by the Occupy Wall Street protest.[45]

OWS’s slogan, “We are the 99 percent” was touted by many of the groups worldwide during their protests.[46]

According to the New York Post, Occupy movement protests in 18 cities across America cost taxpayers a total of $13 million.[47]

Occupy Wall Street was originally created with the idea that it would focus on a specific list of left-wing demands.[48] However, as the protests unfolded the focus of the occupation centered instead on a general anger toward major businesses, especially banks and financial institutions. [49]

The protests popularized the slogan “99 percent,” as a criticism of the perceived economic inequality in America.[50]

The protesters issued a “Declaration of Occupation,” which was described as “more a world view than a list of demands” bemoaning corporate influence and “economic power” in American democracy.[51]

OWS was criticized for lacking a set of core objectives that would allow it to turn its activists’ wide-ranging left-wing complaints into actionable legislative items or a sustained political upheaval.[54]

OWS co-creator Micah White continues to operate the website OccupyWallStreet.org, which was created by White and his colleague Kalle Lasn for Adbusters in the lead up to the protest.[55] The website is currently operated by The Occupy Solidarity Network, Inc. (OSN) a group which claims to be a New York 501(c)(4) non-profit.[56]

On the website White frequently argues that the OWS protests were “a constructive failure because […] it revealed the limitations of contemporary activism.”[57]

White continues to use the website to push for new, leftist movements, in July 2016 he used the website to support #OccupyDNC, a Democratic National Convention walkout protest in support of presidential candidate Bernie Sanders against the eventual Democratic nominee Hillary Clinton.[58]

White uses the website to support the activities of the Black Lives Matter movement and what he labels “Occupy Black Lives.”[59] However, White urges the Black Lives Matter protesters to learn from the failures of OWS[60] to channel their disruptive actions into political activity that will put in place left-of-center leaders in government.[61]

The OWS website has an “action” link that connects (through a secondary source) interested activists with a wide array of left-leaning protest organizations, and which provides activists with other resources to carry out protest actions in their communities.[62]

The OWS website also includes a statement in support of safe occupy spaces for women and LGBT protesters co-signed by more than 50 far-left groups. The statement proclaims, “It’s no secret that the Wall Street 1% who wrecked our economy are disproportionately straight and male.” Among the organizations signing the statement with OccupyWallSt.org are organizations such as Radical Feminists, Code Pink, Tampa Anarchist Collective, and Occupy Patriarchy.[63]

The Occupy movement inspired by OWS “tried repeatedly to resurrect the movement after the main bastions in Oakland and New York City were evicted in November 2011. But it never regained its footing.”[64]

However, OWS has been credited with helping to foment a variety of longer lasting left-leaning political organizations and movements, including a national May Day general strike, protests against a North Atlantic Treaty Organization (NATO) summit in Chicago,[65] U.S. Senator Bernie Sanders’ presidential candidacy,[66] protests by NFL players during the national anthem, and the Black Lives Matter movement.[67]

Left-wing writer Arun Gupta has argued that though there is “no direct line” between OWS and Black Lives Matter, “Black Lives Matter is the true heir to Occupy because it uses militant protest, digital media, and fluid and opaque leadership structures to challenge state power.”[68]

OWS was credited with helping Democrats to focus their messaging on perceived income inequality and a push for a minimum wage increase.[69] Similarly Gupta noted that OWS’ “use of direct action for wealth redistribution and against state power has been explicitly adopted by today’s immigrant-rights, low-wage worker, and climate-justice movements.”[70] Gupta also noted that the “SEIU-backed ‘Fight for $15’” minimum wage campaign “first seized the issue of income inequality in November 2012, just as Occupy had faded.” [71]

Other OWS offshoots, Rolling Jubilee and Debt Collective encouraged the use of “strike debt” activism whereby protesters would incur debt and then refuse to pay it as “a form of political protest.”[74]

At least some of OWS individual protesters were members of left-wing extremist groups such as Antifa.[77] The leftist organization U.S. Day of Rage was an early supporter of OWS and helped to promote and plan the occupation protest.[78] International fugitive Julian Assange was an enthusiastic early supporter of the Occupy movement,[79] and in October 2011 he personally addressed an Occupy protest in London, England.[80] Assange subsequently and apparently falsely claimed credit for planning the Arab spring and OWS protests.[81]

OWS was supported by many large labor unions. The United Federation of Teachers (UFT) and the Transport Workers Union (TWU) Local 100 pledged “solidarity” with the protest.[82] The United Steelworkers and the International Brotherhood of Teamsters (IBT) union supported the effort.[83] A number of other unions including the United Auto Workers (UAW), United Healthcare Workers (UHW) and Public Employees Union (PEU) District Council 37 participated in an OWS-organized protest march.[84]

Similarly, “Liberal groups such as MoveOn.org and Democracy for America gave their blessings” to the OWS protest and raised money to support the initiative.[85]

U.S. Senator Bernie Sanders issued a “full-throated” statement of support for the movement saying, “We have the crooks on Wall Street […] and we will be damned if we’re going to see a handful of robber barons control the future of this country.”[89]  The then-co-chairs of the Congressional Progressive Caucus issued a statement celebrating the OWS protest, and a number of other Democratic members of Congress including, Reps. Keith Ellison (D-Minnestota), Raul Grijalva (D-Arizona), Barbara Lee (D-California), and Dennis Kucinich (D-Ohio) also issued statements in support of the protests.[90]

In October 2011, future U.S. Senator Elizabeth Warren (D-Massachusetts) said that she supported the OWS protests, claiming credit for creating “much of the intellectual foundation for what they do.”[91]