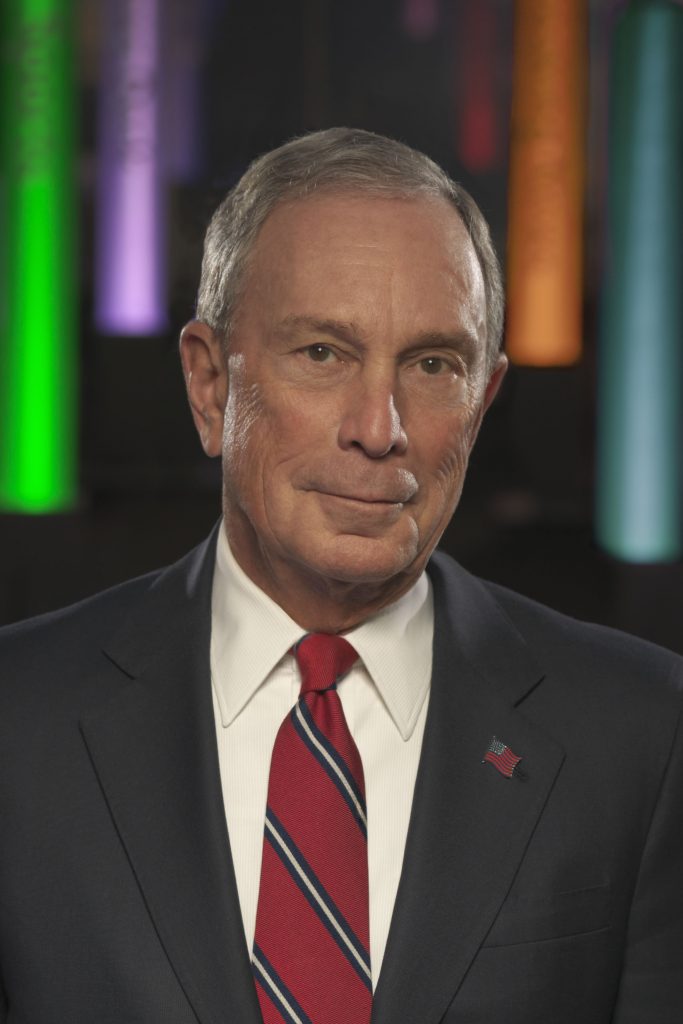 Michael Rubens “Mike” Bloomberg is an American businessman, author, politician, and philanthropist. His net worth is estimated at US$47.8 billion, as of October 2017, ranking him as the 8th richest person in the United States and the 10th richest person in the world. He served as the 108th Mayor of New York City from 2002 until 2013.

In October 2008, the New York City Council voted 29-22 in favor of extending the term limit for elected city officials beyond two terms, allowing Bloomberg to run for a third term as New York City mayor. [1] Regarding the decision, Council Speaker Christie Quinn commented, “what you need is New Yorkers to have the opportunity to have consistent leadership.” [2] In addition, Bloomberg stated the decision was “the right choice.” “Those of us who work on both sides of City Hall must now move forward with the important decisions that face us, particularly finding ways to soften the fallout from the economic downturn and balancing our budget as revenues decline.” [3]

In November 2009, Bloomberg was reelected for a third term as New York City mayor, defeating Democrat William C. Thompson Jr by less than 5 percent of the vote. Bloomberg had spent $102 million of his own money during the election, or $183 per vote. At the time, it was the most expensive campaign in municipal history, with Bloomberg having spent more of his own money than any other individual on an election in United States history. [4]

On November 24, 2020, Bloomberg announced his entry as a Democrat into the 2020 presidential race. “I’m running for president to defeat Donald Trump and rebuild America. We cannot afford four more years of President Trump’s reckless and unethical actions,” read the announcement letter posted on his campaign website. [5]

During his position as Mayor, Bloomberg and the New York City Health Department issued several proposals as a means of improving health and nutrition standards, one of which being limiting the size of size of soda and other sugar-sweetened beverages commercially sold within the city. [6] However, it was reported in March 2012 that the Department of Homeless Services (DHS), attempting to enforce these nutritional restrictions at city shelters, began to turn away food donations as officials were unable to assess their nutritional content. DHS Commissioner Seth Diamond commented, “the ban on food donations is consistent with Mayor Bloomberg’s emphasis on improving nutrition for all New Yorkers.” [7]

On November 29, 2011, Bloomberg gave the keynote address at the Massachusetts Institute of Technology’s (MIT) Collaborative Initiative Conference in Cambridge, Massachusetts. During the address, he likened the New York Police Department (NYPD) to a personal army, saying “Where else would I run an organization with 330,000 employees? I have my own army in the NYPD, which is the seventh-biggest army in the world.” [8]

On February 5, 2016, Bloomberg spoke at the Aspen Institute think tank in Aspen, Colorado regarding crime and gun control. Bloomberg expressed his support for the procedure of stop-and-frisk, commenting that the “only way to get guns out of kids’ hands is to throw them up against the wall and frisk them.” He continued “It’s controversial, but […] 95% of your murders, and murderers, and murder victims fit one M.O. […] They are male, minorities, 15 to 25. That’s true in New York, it’s true in virtually every city in America […] You’ve got to get the guns out of the hands of the people that are getting killed. First thing you can do to help that group is to keep them alive.” [9]

He also commented, “These kids think they’re going to get killed anyway because all their friends are getting killed […] [S]o they just don’t have any long-term focus or anything. It’s a joke to have a gun. It’s a joke to pull a trigger […] If you can stop them from getting murdered, I would argue everything else you do is less important.” [10] Following the event, representatives for Bloomberg asked the Aspen Institute not to release footage of his appearance. [11]

In 2001, during an interview for the New York Magazine, Bloomberg was asked if he had ever tried the drug marijuana. He commented “You bet I did. And I enjoyed it.” This was followed by the National Organization for the Reform of Marijuana Laws (NORMAL) Foundation spending $500,000 on an advertising campaign which featured his comments, including a full-page one in the New York Times on April 9, 2002. On the same day, Bloomberg gave a news interview at New York City Hall and commented “In terms of, I had, certainly when I was younger, as I suppose most people in my generation, experimented. I never lie, so if somebody asked me a question, I told them. Do I, in retrospect, wish I didn’t say it that day so they couldn’t quote it? Of course.” [12]

By 2009, under Mayor Bloomberg, the NYPD had made a 50% increase in the number of low-level marijuana arrests since Rudy Giuliani’s time as mayor. In 2008, about 40,300 low-level pot arrests had been made within New York City, 87% of the arrests involving individuals of African-American or Latino descent, according to a study by Sociology Professor Harry Levine of Queens College. Professor Levine’s study continued that the number of low-level pot arrests in 2008 was greater than the number of similar arrests made during “the 12 years of Mayor Koch, plus the four years of Mayor Dinkins, plus the first two years of Giuliani combined.” [14]

In June 2019, Bloomberg announced that he planned to donate $500,000,000 to launch a “Beyond Carbon” campaign meant to advocate for a stronger government response to climate change. [15] Bloomberg’s decision was reportedly a “direct response to the Green New Deal,” a left-wing environmental policy proposed in March 2019 by Rep. Alexandria Ocasio-Cortez (D-NY), which Bloomberg criticized as a “pie in the sky” idea. [16]

For his 2020 presidential campaign, Bloomberg announced that his climate plan would aim to achieve a 100 percent “clean-energy economy-wide future” by 2050, which would entail cutting emissions by 50 percent before 2030 and replacing the remaining 251 coal plants in the United States. [17] [18] Despite the massive changes such proposals would bring, the environmental group Greenpeace gave his plan a “D-plus” grade for, among other things, neglecting to include a plan to entirely phase out the fossil fuel industry. [19]

Indiana Attorney General (AG) Curtis Hill and other Republicans believe this to be part of a push to insert left-leaning AG special assistants into state offices that would promote Bloomberg’s “climate agenda” by going after oil companies such as ExxonMobil and pushing back against President Donald Trump’s environmental policies. [22]