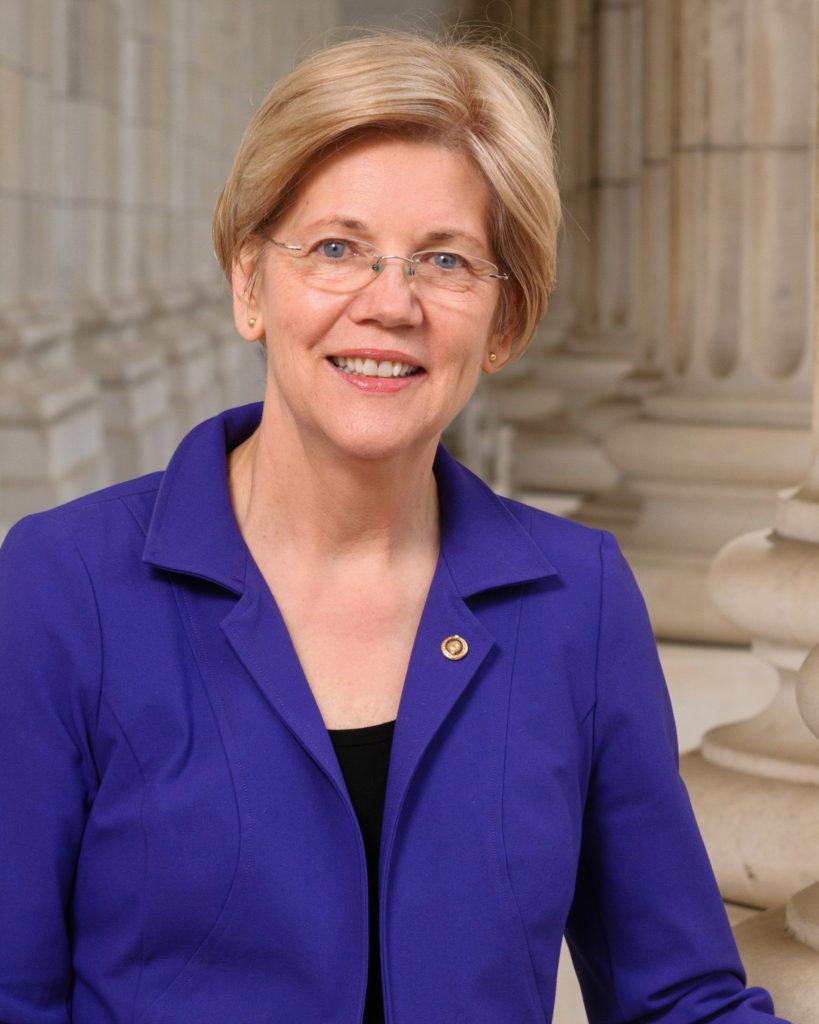 Elizabeth Warren is a Democratic politician who has served as U.S. Senator from Massachusetts since 2012 and is a well-known leader of the left-progressive faction within the Democratic Party. Prior to her election to the Senate, Warren had a long career in academia and on government advisory panels related to economic issues. Warren has been a strident advocate of what she calls “economic patriotism”—aggressive government intervention in the economy and especially the financial sector to restrict private business activity.

Warren ran for the Democratic nomination for President in 2020 but suspended her campaign after earning 81 delegates. She later endorsed the eventual Democratic nominee, Obama administration Vice President Joe Biden.

Warren was born in Oklahoma City to a U.S. Army flight instructor and a housewife. Her father suffered a heart attack when she was 12 and the family entered a period of economic hardship, which Warren would later credit with informing her political views on economics. [1]

Warren attended Northwest Classen High School in Oklahoma City, where she became a state debate champion. Warren graduated from high school at 16 and began attending George Washington University the same year on a full-ride debate scholarship. Warren left the university after two years to move to Texas and marry her high school sweetheart, James Robert Warren, who currently runs FamilyTreeDNA, a DNA-testing company he co-founded. Two years after their marriage, Warren earned degrees in speech pathology and audiology from the University of Houston. [2]

The Warrens moved to New Jersey where both taught in elementary school. They had two children, Amelia and Alex. Elizabeth Warren attended Rutgers Law School and earned her JD in 1976. After graduating, she worked from home as a private lawyer specializing in bankruptcy while raising the children. In 1978, Elizabeth divorced James Robert Warren. [3]

In 1979, Warren met American legal scholar and current Harvard Law professor Bruce Mann at an academic economic conference. The two married the following year. Despite being a “political junkie” and “consummate consumer of news,” Mann has largely avoided the public spotlight. [4]

Warren’s daughter, Amelia Warren Tyagi, is a left-of-center political activist, consultant, and author who has been called her mother’s “full political partner.” [5] She is the co-founder and president of Business Talent Group, an executive placement service. [6] She is also a trustee emeritus at Demos, a prominent left-of-center think tank.

In 2012, Demos sued Massachusetts and forced the state government to send voter registration forms to half a million welfare recipients across the state at a cost to taxpayers of $276,000. As a board member of Demos, Warren Tyagi was accused by then-incumbent Senator Scott Brown (R-MA) of conspiring to undermine the democratic process. Elizabeth Warren was running against Brown for his Senate seat, and the targeted welfare voters were assumed to favor Warren. [7]

Warren’s son, Alexander Warren, has kept out of the spotlight. He attended Kirby Hall School, an elite private school in Texas, and currently works as a computer engineer. [8]

Elizabeth Warren worked as a lecturer at Rutgers Law School from 1977-78 after earning her law degree. She then became a professor at the University of Houston Law Center, was promoted to associate dean in 1980, and earned tenure in 1981. She left the university in 1983. [9]

In 1987, Warren became a professor of commercial law at the University of Pennsylvania and was made an endowed chair in 1990. She stayed at UPenn until 1995, but left briefly in 1992 to be a visiting professor at Harvard University. [11]

In 1995, Warren became an advisor to the National Bankruptcy Review Commission, an independent federal board which advises Congress on bankruptcy law formed under President Bill Clinton. The head of the Commission was former U.S. Representative Mike Synar (D-OK). When first asked to join the Commission, Warren refused and said, “Not a chance. That’s political. I want to be pure.” [16]

In 2007, Warren proposed the creation of the Consumer Financial Protection Bureau to enforce regulations against businesses and banks. When the Bureau was created as part of the Dodd-Frank Act, President Barack Obama appointed Warren as Special Advisor to set up the new agency. [18] She was considered to lead it, but was passed over due to concerns about opposition from Senate Republicans. [19]

In 2008, Warren was appointed to the five-member Congressional Oversight Panel for the Emergency Economic Stabilization Act passed in the wake of the financial crisis. She oversaw the impact and reaction to the government’s Troubled Asset Relief Program (TARP) bailouts. [20]

Warren is currently a member of numerous non-governmental legal advisory groups, including the National Bankruptcy Conference,[21] the American Law Institute, and the American Academy of Arts and Sciences. [22]

Warren ran for U.S. Senate from Massachusetts in 2012 against incumbent Scott Brown (R-MA) who was elected in 2010 during a special election after the death of Ted Kennedy (D-MA). A week after announcing her attention to run, Warren gave a speech in Andover in which she stated, “there is nobody in this country who got rich on his own,” and argued for higher taxes on the rich. Warren’s speech was echoed soon after by President Obama with his “you didn’t build that” speech. [23]

Warren faced no Democratic primary challenger, though the political director of the U.S. Chamber of Commerce stated that “no other candidate in 2012 represents a greater threat to free enterprise than Professor Warren.” [24] Warren raised $39 million for her campaign, the most of any Senate candidate in 2012. [25]

Given Warren’s sudden rise to serious contention for high office, her academic background, and her speeches, Warren garnered much national media attention. She was given a prime speaking slot at the 2012 Democratic National Convention, where she argued that the American economy was “rigged” by Wall Street and corporate interests. [26]

Warren won the election with 53.7% of the vote and became Massachusetts’s first female Senator. [27]

In 2014, Warren was appointed the first-ever strategic advisor for the Democratic Party, a position created specifically for her. Warren was one of the most prolific Democratic fundraisers of the election cycle. [28]

In the 2016 presidential election, Warren made public statements in support of Bernie Sanders (D-VT), but formally endorsed and campaigned for Hillary Clinton (D-NY). Warren was one of five names on Clinton’s shortlist for vice president, but she was not chosen. [29]

In 2018, Warren was reelected to the Senate with 60% of the vote against Massachusetts State Representative Geoff Diehl (R-MA). [30]

On February 9, 2019, Warren announced she was running for President. She positioned her platform as being to the left of the left-of-center Democratic Party establishment represented by former Vice President Joe Biden, but to the right of socialist U.S. Sen. Bernie Sanders (I-VT). [31]

At the start of the race, Warren announced that she “doesn’t take PAC money of any kind.” [32] Warren consistently came in first or second place in monthly fundraising throughout most of 2019 and early 2020. She and Sanders committed to small contribution fundraising, and in October 2019, their average donation size was $26 and $18, respectively. [33] However, in February 2020, Warren began accepting support from Super PACs. [34]

Warren reached her peak popularity in October 2019, when a Quinnipiac poll put her in first place with 28% of the Democratic vote to Biden’s 21%. Warren fell in the polls later in the year and ended up placing third in the Iowa caucuses and fourth in the New Hampshire primary. Warren suspended her campaign on March 5, 2020, after disappointing results in the Super Tuesday primaries. As of May 2020, Warren was in third place with 81 delegates. [35]

Shortly after suspending her campaign, Warren endorsed Biden for president. [36]

Warren is known as a leader of the left-progressive wing of Congressional Democrats, and as a strong supporter of increasing government regulations and control over the economy, and especially the financial sector. [37]

As a member of the Senate Banking Committee, Warren oversaw the implementation of Dodd-Frank, a package of financial regulations introduced in response to the 2008 financial crisis. She also introduced the Bank on Student Loans Fairness Act, which would permit students to take out student loans at the same rate that banks borrow from the Federal Reserve. [38] Ideology

Despite her current party and progressive affiliation, Warren was not a registered Democrat until 1996, when Warren was 46, and she was a registered Republican for at least some years prior. A Politico article in April 2019 interviewed twenty of Warren’s friends and colleagues from her early career, with some describing her as an “ice cold Republican” and “die hard conservative.” Warren was especially noted for her economically conservative views and even “anti-consumer” ideas. Warren never mentioned her Republican past in her books or biographical speeches, though in an interview she claimed that her old economic views were derived from the orthodoxy of the time and that she slowly turned to a more left-wing perspective throughout her years in academia. [39]

Warren is presently considered a progressive liberal with a technocratic wonkish approach to politics. Warren’s current political views are outlined in her books, the 2004 The Two-Income Trap: Why Middle-Class Mothers and Fathers are Going Broke, co-authored with her daughter Amelia Warren Tyagi, and the 2014 A Fighting Chance. Warren asserts families can no longer support themselves on single incomes as they did during the post-WWII era as a result of rising costs in housing, healthcare, and education. She advocates for an ideology she calls “economic patriotism,” which consists of large-scale government intervention in these sectors and the financial industry to restructure the American economy. [40]

Warren has faced persistent criticism for claiming Native American ancestry throughout her career with little to no evidence. [41]

According to Warren, she was told stories by family members when she was young about having Cherokee and Delaware Indian relatives. Warren’s first known instance of claiming Native American ancestry was in 1986, when she filled out her registration card for the State Bar of Texas. [42] She would later reiterate the claim in the American Association of Law Schools. In 1992, when Warren briefly worked at Harvard Law School before taking a full-time position there, Harvard reportedly cited her to comply with a federally mandated affirmative action program. The head of Harvard’s hiring committee admitted that they were aggressively hiring women and minority faculty members at the time. [43]

However, Warren did not apply for Rutgers Law School’s Program for Minority Group Students, and while working at the University of Texas, she officially identified as “white.” Warren has claimed that she has never used her Native American ancestry claim for professional gain. [44]

In 2018, Warren took a DNA test and publicly stated, “DNA test shows strong likelihood I have Native-American heritage.” Details of the test revealed that Warren almost certainly had one pure Native American relative 6-10 generations ago. This gave Warren a Native American ancestry proportion between 1.66% and 0.01%, which may be less than that of the average modern American. [45]

The government of the Cherokee Nation publicly denounced Warren’s attempts to prove her Native American ancestry through DNA and stated that Warren was “undermining tribal interests with her continued claims of tribal heritage.” Warren privately apologized to the Cherokee Nation and did not publicly affirm Native American ancestry between that meeting and May 2020. [46]