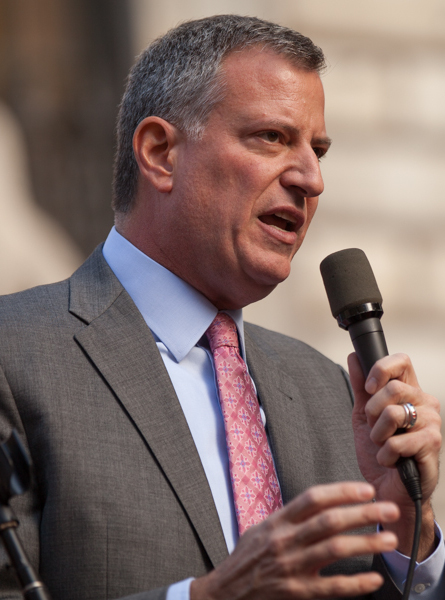 Bill de Blasio is a New York City Democratic politician who has served as mayor of New York City since 2014 after serving lesser roles in the city government for twelve years. He ran for the Democratic nomination for President in 2020 but suspended his campaign after four months.

De Blasio is considered a left-wing progressive, and he has described himself as a democratic socialist, proponent of President Franklin D. Roosevelt’s New Deal, and supporter of liberation theology, a far-left Christian-inspired socialist doctrine. [1] In his youth, de Blasio was a radical-left activist who supported the communist-aligned Sandinistas in Nicaragua. [2] Though de Blasio no longer explicitly espouses such radical views, he has said that he is “very proud” of his past activism. [3]

With New York City becoming the epicenter of the COVID-19 outbreak, de Blasio has been criticized for his initially lax response to the pandemic, and then excessively harsh compensating measures. His disparate treatment of Orthodox Jewish communities, especially after tacitly and explicitly supporting left-progressive demonstrations aligned with Black Lives Matter despite having issued orders prohibiting mass gatherings,[4] drew further condemnation, including from other New York City Democratic officials. [5]

De Blasio was born in 1961 in Manhattan as Bill Wilhelm to Warren Wilhelm and Maria Angela. De Blasio’s father served in the army in World War II and had a career as an economist. His mother served in the Office of War Information and later worked as an editor at Time. [6] Both were accused of having communist sympathies in the 1950s. [7] The two separated before de Blasio started kindergarten and he was largely raised by his mother and her extended family. [8] The elder Warren Wilhelm committed suicide when de Blasio was 18. [9]

In 1966, de Blasio moved to Cambridge, Massachusetts. In 1979, he graduated from Cambridge Rindge and Latin School. [10] In 1983, de Blasio graduated from New York University with a degree in metropolitan studies. While there, de Blasio co-founded a coalition to push NYU’s administration to provide more financial transparency. [11] The same year, he legally changed his name to Bill de Blasio-Wilhelm to represent his mother’s Italian roots. [12] In 1987, de Blasio attained a Master of International Affairs from Columbia University. [13]

In 1994, de Blasio married Chirlane McCray, a writer, poet, and speechwriter for de Blasio. De Blasio and McCray went to Cuba for their honeymoon in violation of US travel restrictions on the communist regime. De Blasio kept the trip secret from his children until it was revealed in 2013 during his mayoral run. [14]

After graduating from Columbia in 1987, de Blasio worked as a political organizer for the Quixote Center for a year. The Center was a Catholic social justice nonprofit based in Maryland known for its support of the communist Sandinista government in Nicaragua, which engaged in a protracted civil war against the anti-communist Contras. [17]

De Blasio oversaw the organization’s efforts to send millions of dollars in food and medicine to Nicaragua, with most supplies going to the Sandinistas. In 1988, de Blasio went to Nicaragua for ten days. While there, de Blasio had what he called an “epiphany” about how an efficient and benevolent government should operate after seeing a map of the precise location of every family in the local town on a hospital wall. De Blasio was later arrested twice in the US for protesting the American government’s policies towards Nicaragua. [18]

In 1988, de Blasio moved back to New York City to work at a nonprofit focused on improving health care in Central America. [19]

In 1990, de Blasio joined the Nicaragua Solidarity Network of Greater New York, a group of “democrats, Marxists and anarchists” who supported the Sandinistas after being voted out of power in 1990. The organization raised money for the Sandinistas, advertised parties to celebrate the communist Cuban Revolution, and staged protests on the subway. [20] In a 1990 New York Times report, the Solidarity Network was credited with organizing two-to-three-week tours of Nicaragua for 250,000 Americans in support of the Sandinistas. [21]

In July 1990, de Blasio gave an interview to the New York Times in which he discussed his support for the Sandinistas. De Blasio worked to connected local New York and Nicaraguan labor unions. He personally subscribed to Barricada, the Sandinistas’ publication. At a Network meeting, de Blasio described himself as a democratic socialist. [22][23]

In 1990, de Blasio volunteered for the successful mayoral campaign of David Dinkins (D-New York City). After the election, he worked as an aide in city hall. [24]

In 1994, de Blasio was hired to run the successful re-election campaign of long-sitting Rep. Charlie Rangel (D-NY). [26] Despite their history, Rangel and de Blasio have refused to endorse each other in subsequent elections. [27][28]

In 1997, de Blasio became the regional director of the U.S. Department of Housing and Urban Development (HUD) for New York and New Jersey under President Bill Clinton. [29]

In 1999, de Blasio was hired as campaign manager for Hillary Clinton’s (D-NY) Senatorial run. Clinton’s campaign spent $29 million against Rep. Rick Lazio (R-NY)’s $40 million, making it the most expensive U.S. Senate election to date. Clinton won the election with 55.3% of the vote, marking the first time a sitting first lady was elected to office. [30] De Blasio would endorse Clinton for president in 2016. [31]

De Blasio supported progressive legislation throughout his six years on the Council. In 2002, de Blasio co-sponsored the Benefits Translation for Immigrants Law to provide translations for immigrants applying for government services. [36] In 2007, he co-sponsored the Domestic Partnership Recognition Law, which provided full marriage benefits to same-sex couples in registered domestic partnerships. [37]

In 2009, de Blasio was elected New York City Public Advocate, a liaison between the city council and mayor (at the time then-Independent Michael Bloomberg). In his victory speech, de Blasio criticized the mayor’s policies on homelessness and education. A New York Times article suggested that de Blasio was preparing to run for mayor in 2013. [38]

As Public Advocate, de Blasio continued to espouse left-progressive policies. He was known for being confrontational and publicly shaming opponents and business figures, especially landlords. He created an annual list of New York City’s worst landlords, which continued after de Blasio left office in 2013. [39]

De Blasio has served as mayor of New York City since 2014. In 2013, de Blasio first ran against eight other candidates in the Democratic primary. He eventually took the lead by gaining valuable endorsements, including from Alec Baldwin, Sarah Jessica Parker, the Service Employees International Union (SEIU), and President Barack Obama, whom Hillary Clinton served as Secretary of State. [40] In July, de Blasio made news when he was arrested as part of a demonstration protesting the Long Island College Hospital. [41]

De Blasio won the primary with 40.9% of the vote and won the general election with 73.2% of the vote. Most surprising was his support from black New Yorkers, 96% of whom voted for de Blasio. This support was attributed in part to de Blasio’s promotion of economic redistribution policies and his marriage to a black woman. The New York Times wrote that “many black New Yorkers are seeing de Blasio’s victory as their own.” [42][43]

De Blasio has been one of New York City’s most left-leaning mayors. During his two terms, de Blasio has introduced universal pre-kindergarten education, created a $15 minimum wage,[45]  increased teacher pay,[46] denied spaces for charter schools,[47] ended stop-and-frisk,[48] temporarily froze rents on some apartments,[49] and is in the process of building 200,000 low-income housing units. [50]

In a 2017 interview with New York magazine, de Blasio advocated expanded government control over land use in New York City:[53]

I think people all over this city, of every background, would like to have the city government be able to determine which building goes where, how high it will be, who gets to live in it, what the rent will be. I think there’s a socialistic impulse, which I hear every day, in every kind of community, that they would like things to be planned in accordance to their needs. And I would, too. Unfortunately, what stands in the way of that is hundreds of years of history that have elevated property rights and wealth to the point that that’s the reality that calls the tune on a lot of development.

De Blasio’s tenure as mayor has been criticized more for his attitude and composure than his policies. Vox described de Blasio as “sanctimonious, arrogant, stubborn, and preachy.” Critics have suggested he focuses too much on “big picture symbolism” at the expense of day-to-day city management, and de Blasio has a mildly hostile relationship with the media, especially since he is frequently late to press conferences. [54]

De Blasio has been criticized for his slow response to COVID-19. In early March, when COVID-19 had already spread across most of Europe and cases began to appear in the US, de Blasio was urging New Yorkers to continue regular daily life. Schools were left open even as many children stayed home and teachers widely argued for closing. De Blasio’s advisors and aides strongly supported instituting a lockdown earlier, but de Blasio didn’t issue a full lockdown until March 16. [55] As of early June 2020, New York City had over 200,000 coronavirus cases and reported over 20,000 deaths from the disease. [56]

On March 16, after de Blasio had instituted a particularly aggressive lockdown of New York City, de Blasio called for the federal government to nationalize crucial businesses and industries to fight the disease. De Blasio suggested that President Donald Trump should order the seizure of manufacturing centers to produce medical equipment and hospitals to ensure a rational distribution of materials. [57]

On May 20, de Blasio declared his intention for the city’s government to borrow $7 billion to cover the $1.5 billion per month budget shortfall caused by the coronavirus. Borrowing at such a scale had been banned after a financial crisis in the 1970s. If passed, the loan would cost the city about $11 billion over the next decade. Critics claim that de Blasio is partially responsible for the budget crisis after increasing government spending throughout his tenure and that he has yet to explore all cost-cutting options. [58]

De Blasio’s mayoralty has been marked by a spate of anti-Jewish attacks, especially attacks targeting Orthodox Jews. [59] New York City Councilman Chaim Deutsch (D-Brooklyn) and others criticized de Blasio’s response to the wave of attacks, saying the mayor had failed to uphold a promise to expedite creation of a city office to combat hate crimes. [60]

During the COVID-19 pandemic, de Blasio made comments and took actions that some thought seemed to indicate disparate treatment against Jewish communities. On April 28, de Blasio tweeted the message “My message to the Jewish community, and all communities, is this simple: the time for warnings has passed. I have instructed the NYPD to proceed immediately to summons or even arrest those who gather in large groups. This is about stopping this disease and saving lives. Period.” On the same day, de Blasio deployed police to break up a Hasidic Jewish funeral for a man who had died of COVID-19. The mayor received harsh criticism from the New York City Jewish community, which numbers 1.2 million. [61]

In May 2019, de Blasio announced he was running for President with the campaign slogan, “Working People First.” [64] De Blasio’s campaign was seen as a longshot, with only 29% of New York state voters having a favorable opinion of the mayor in June 2019, compared to 34% having a favorable opinion of President Donald Trump. [65] Additionally, 76% of New Yorkers did not want de Blasio to run for president. [66]

De Blasio’s national poll numbers consistently hovered under 1% and he failed to qualify for three primary debates. In September 2019, de Blasio announced that he was ending his run for president. [67] De Blasio’s campaign had spent a total of $1,417,609.97. [68] Its largest contributor source was members of the AFL-CIO, which donated $209,260. [69]