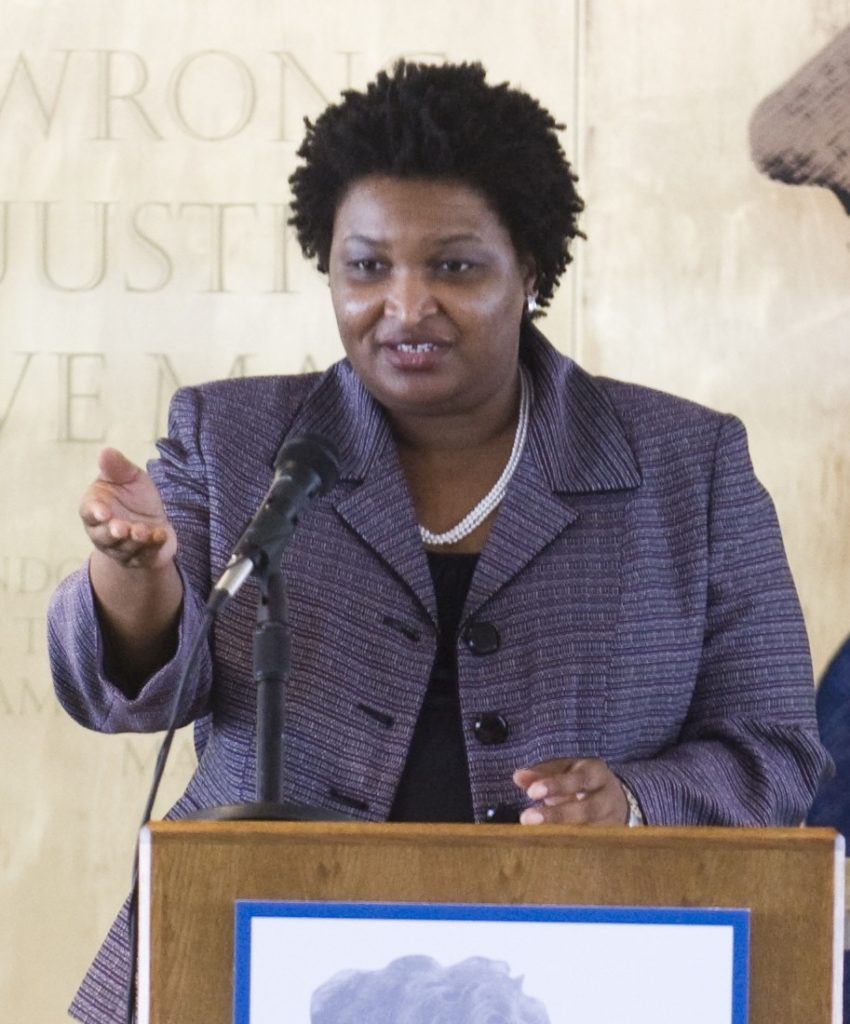 Stacey Abrams is a Democratic Party politician and activist. She is best known for losing the 2018 Georgia gubernatorial election as the Democratic Party candidate; since her loss, she has alleged election improprieties, many think without clear evidence.[1] She sits on the board of the Center for American Progress, a prominent left-of-center think tank with ties to the Democratic Party establishment.

Prior to her unsuccessful gubernatorial campaign, Abrams was a Georgia state representative from 2006 to 2017. She was House Minority Leader from 2010 to 2017, becoming the first woman to lead in either of the state’s legislative chambers and the first African American to lead either major political party in the state House.[2][3]

Abrams also founded the New Georgia Project, a left-leaning voter registration group, and was a minority partner in a financial services firm. After losing the governor race in 2018, she founded a voter outreach group, Fair Fight Action.[4]

Abrams was raised in Mississippi and Georgia. She received a Master’s Degree from the LBJ School of Public Affairs at the University of Texas and a J.D. from Yale Law School. Since 2001, she has written eight romance novels which have sold over 100,000 copies.[5]

Abrams has been involved in a number of business and activist ventures.[6]

She co-founded and was Senior Vice President at Nowaccount Network Corporation, a financial services company, and she co-founded a beverage company called Nourish, Inc. She also worked for the firm Sutherland as a tax counsel, in addition to having senior roles with other firms.[7]

Abrams has launched a number of political advocacy groups. Two prominent ones are New Georgia Project and Fair Fight Action. New Georgia Project was founded in 2013 to help young minorities get on voter rolls, and claimed it registered 200,000 new Georgia voters from 2014 to 2016. She re-launched Fair Fight Action from a previous group in the wake of her defeat in the 2018 gubernatorial election to then-Secretary of State Brian Kemp (R).

Abrams has served in senior roles for a number of other non-profit organizations.[8]

Several of Abrams’ most prominent organizations have run into controversies. New Georgia Project had a lawsuit against Kemp thrown out after the group claimed he was suppressing minority votes as Secretary of State, and it was investigated by Kemp’s office.[9] The group was also criticized for being secretive about its funding, and Abrams’ primary opponent, then-State Rep. Stacey Evans (D-Smyrna), alleged that New Georgia Project was overstating its voter registration claims in light of federal election data which showed a much smaller number of people were fully registered.[10]

Nowaccount was founded in 2010 and provided substantial salaries to Abrams for six years. The firm also secured state government contracts while Abrams was a senior executive. Abrams and the company’s other leaders disputed claims that they did anything wrong when Evans brought the issue to the campaign trail – Evans said that due to Abrams’ high-ranking position within state government, the public should have known that Abrams’ company was engaging in state work. Abrams had a 16 percent stake in Nowaccount, well within a state law that requires a 25 percent or lower stake in private companies which do business with the state. Abrams said she was not involved in the company’s financial or business decisions.[12]

Fair Fight Action filed a lawsuit against Kemp weeks after he beat Abrams in the gubernatorial primary race.[13] The group claims Kemp’s office made voting overly complicated for voters, especially for black voters. Fair Fight Action has come under criticism by groups supporting President Donald Trump for its promotion of Abrams, who was first CEO and as of 2019 was chair of the group’s board. The Associated Press reported on the critiques while noting that no lawbreaking has occurred and that Fair Fight Action has acted in ways similar to other non-profit advocacy groups which support future candidates for office.[14]

Abrams was criticized in 2016 for not initially disclosing that she earned $30,000 while working for Michelle Nunn’s Senate race while holding her positions with New Georgia Project and in the House of Representatives.[15]

Following her failed bid to unseat Georgia Governor Brian Kemp in the 2022 midterm elections, Axios reported that Abrams’ campaign owes $1 million to vendors but is unable to pay it back depite raising over $100 million during her 2022 campaign. According to Abrams’ campaign manager Lauren Groh-Wargo, the issues with money flow in the final weeks of the campaign were due to a “cavalcade of negative press and negative polling.” [16] In addition, the campaign reportedly had to sell “its donor and voter contact databases to pay down its debt” [17] and even had to stop the salaries for most of its employees only a week following the November 2022 election. [18] Several former campaign employees made statements to Axios, with one noting the campaign’s decision to cut salaries as “messed up.” [19]

Abrams has served two roles in public office. She was Deputy City Attorney for Atlanta prior to being elected to the state House of Representatives.[21]

She resigned from the House of Representatives in 2017 to run for Governor. She served a total of 11 years.[22]

VoteSmart tracked Abrams’ key votes while in office.[23] She opposed measures restricting income tax increases and expanding gun ownership as well as a ban on most abortions after 20 weeks’ gestation. She also opposed a bill which disallowed illegal immigrants from serving on “local governing bodies.” Abrams also helped stall a tax bill which would have increased taxes for middle-class workers and pushed for Medicaid expansion.[24]

Abrams lost the 2018 gubernatorial election to Republican Brian Kemp. She received 49 percent of the vote, losing by over 54,000 votes. She and other Democrats claimed that Kemp acted improperly by directing his office to crack down on potential voting fraud – both in terms of the alleged fraud itself and because Kemp’s position as Secretary of State meant that his agency was examining alleged voter fraud while he was running for governor.

As outlined by PolitiFact, Kemp’s office said it was enforcing a 2017 law which required voter registrations to exactly match records in the Georgia Department of Driver Services or the U.S. Social Security Administration. Inexact matches were reported to applicants, who have 26 months to fix any issues – though pending applicants can vote with photo IDs at their polling location.[26] Georgia’s “exact match” voting identification rule was criticized by Democrats as a voter suppression tactic, and a judge ordered Kemp’s office to reinstate over 3,000 votes initially deemed invalid.[27]

Kemp’s office removed 1.4 million registered voters from the rolls for a variety of reasons.[28] Some people died, some moved, some had inexact matches – which Kemp’s office defended because voter registration was still higher than in 2010, but which critics said removed more inactive voters than from 2008-2012.[29]

Late in the race, Kemp claimed Democrats tried to hack state files. National Review’s David French called this claim “dubious” but noted that it seemed to have no effect on the race. French and others noted that Kemp was enforcing state law in many instances of alleged voter suppression which Abrams and her allies claimed, and pointed to record voter turnout as evidence that the suppression didn’t take place.[30]

Abrams has consistently said she “won” the governor’s race, including as late as May 2019.[33] She told The New York Times in late April 2019 that while Kemp is the legal governor of Georgia, she “won” through accomplishing several Democratic Party goals, including high voter turnout.[34]

Abrams made a number of comments about the Democrats’ 2020 presidential candidates. In April 2019, she defended then-candidate Joe Biden regarding accusations that he inappropriately touched women in light of Biden’s vow to be more careful with physical contact.[35] She also defended identity politics in a Center for American Progress speech which at least one commentator viewed as a tacit rebuttal of Pete Buttigieg’s criticism of the tactic.[36][37]