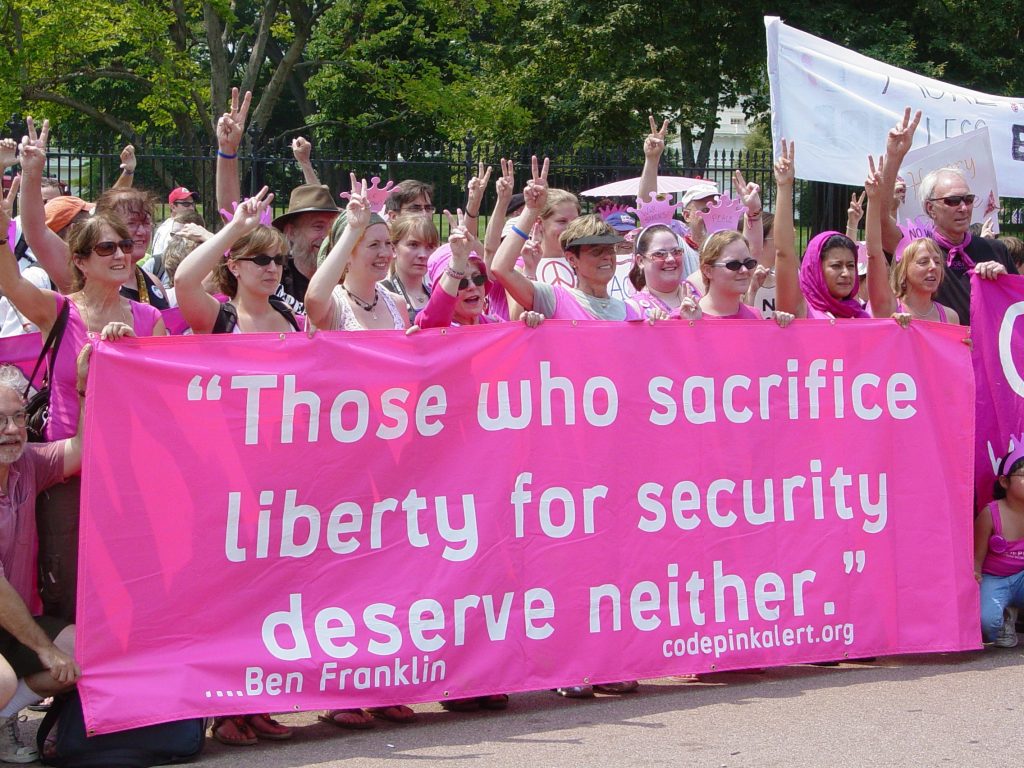 Code Pink (or CODEPINK) is a left-wing advocacy group founded in 2002 by Jodie Evans and Medea Benjamin. It was created to oppose the 2003 Iraq War but also focuses on “social justice” by using “feminist principals [sic].”[1] It is well known for its support of Palestinian interests,[2] the Communist Castro regime in Cuba,[3]

[/note]  as well as other anti-American governments and groups.[4]

Code Pink is a left-of-center 501(c)(3) organization that was founded in 2002 by Medea Benjamin, Jodie Evans, Diane Wilson, and other female activists. The organization started as a vigil outside of the White House to protest military action against the Baathist regime of then-Iraqi dictator Saddam Hussein before the Iraq War in 2002.[5] Left-wing organizations such as Greenpeace and Global Exchange supported the demonstration; Code Pink co-founder Medea Benjamin stated that “war is a women’s issue,” and talk of war had been full of “testosterone-poisoned rhetoric.” Kristi Laughlin, a spokesperson for Code Pink at the time, stated that militarism “encourages domestic violence.”[6]

During the reconstruction of war-torn Iraq in 2004, Code Pink, along with Global Exchange and United For Peace and Justice, established Iraq Occupation Watch (IOW).[8]

Although IOW’s original mission statement claimed the organization was formed to serve as a “watchdog regarding the military occupation and U.S.-appointed government,” it began to promote hostile sentiment toward U.S. troops stationed in Iraq.[9]  Although Medea Benjamin claimed the change in IOW’s mission occurred after she left Iraq to return to the United States on July 14, 2004, the Code Pink co-founder had previously expressed the need to create distrust towards U.S. troops in local communities. Benjamin wrote in April 2003: “let’s start a ‘Bring All the Troops Home’ campaign to stop the expansion of U.S. bases and start dismantling some of the hundreds of existing bases overseas.” Benjamin also called for Code Pink supporters to “channel the bursting anti-American sentiment overseas.”[10]

Code Pink was also endorsed the Civil Liberties Restoration Act of 2004 which was created to reverse certain national security measures put in place after the 9/11 terrorist attacks.[11]

In 2004, Code Pink co-founder Medea Benjamin traveled to Jordan to provide the “refugees” of Fallujah with $600,000 worth of humanitarian aid.[12]

Code Pink is a supporter of the “Boycott, Divestment, and Sanctions” (BDS) campaign which seeks to ostracize Israel from the international community. Israeli officials have barred entry to the country by Code Pink under a law prohibiting foreign activists for BDS from entering Israel.[13]

Code Pink signed a 2004 letter to the U.S. Senate which urged senators to vote to condemn Israel’s construction of a security fence in the West Bank.[14] The organization also endorsed the Beirut Communique, which supported “the right of the people of Iraq and Palestine to resist the occupations,” the “unconditional withdrawal of US and ‘coalition’ forces from Iraq,” and the withdrawal of all Israelis from the territories beyond the 1949 armistice lines and the dismantlement of Israel’s anti-terrorist security barriers. The Beirut Communique also denounced the supposed “racist and colonial character of Zionism.”[15]

Code Pink endorses the Free Gaza Movement,[16]  which promotes similar ideals as the Beirut Communique.[17] The organization traveled to Egypt in 2009 with the intent of entering the Hamas-governed Gaza Strip. Although Egyptian authorities prevented most of the 1,300 activists from entering Gaza, 100 were allowed through the border. Code Pink released a statement on what it called the “Gaza Freedom March,” claiming that the actions of the activists drew “worldwide attention” to the supposed “siege” of the blockaded terrorist-ruled statelet.[18]

During a Code Pink protest at the 2015 annual conference of the American Israel Public Affairs Committee (AIPAC), one demonstrator displayed the flag of the terrorist organization Hezbollah while others held signs that drew similarities between Israel and ISIS.[19]

Members of the organization traveled to Pakistan in 2012 to protest American drone strikes on al-Qaeda targets in the country. Code Pink conducted a tour with controversial anti-American left-wing Pakistani politician Imran Khan as he attempted to promote peace with the Taliban. The Pakistani military refused to let Khan and Code Pink enter a Taliban-controlled region near the border of South Waziristan, forcing the group to make their way back to the capital city of Islamabad.[20]

Code Pink organized a trip to Cuba in late April 2017, to celebrate the Communist holiday of May Day in the country’s “most exciting cultural city, Santiago.” After the celebration, Code Pink organized an “international gathering against foreign military bases.”[21] During its time in Cuba, Code Pink members attended a “Meeting for Solidarity with Cuba,” visited the graves of Communist Fidel Castro, and visit a “Defense Committee of the Revolution.”[22]

The organization has visited Cuba multiple times, including a “delegation” to the country in February 2015,[23] and an “Activists Tour” in November 2015.[24] It has also praised the communist nation, and its former leader Fidel Castro, many times.[25]

Outside of protests and visits to anti-American countries, Code Pink has attempted to “arrest” political figures it deems to be “war criminals.” During a Senate hearing in January 2015, members of the organization accosted former U.S. Secretary of State (and Nobel Peace Prize laureate) Henry Kissinger.[26]

On July 7, 2021, CODEPINK along with 47 other organizations signed a letter to President Biden and the U.S. Congress accusing the United States of approaching China with “an antagonistic posture.” [27] The letter claims that “escalating, bipartisan anti-China rhetoric […] bolsters racist, right-wing movements in the United States,” and that the “U.S. demonization of China has always been a major barrier to progress in global climate talks.” [28] The letter urges the United States to cooperate with the Chinese government, despite its record of humans rights abuses, to “address the existential threat that is the climate crises.” The letter also cites statistics on U.S. and Chinese greenhouse gas emissions and criticizes the U.S. for being “the biggest carbon polluter in history.” [Put the citation here rather than in the third to last sentence]

Although the organization has a lack of transparency regarding its donors, key funders of Code Pink include the Benjamin Fund, Threshold Foundation, and New Priorities Foundation. It has also received other donations from the Tides Foundation, the Barbra Streisand Foundation, and Global Exchange.[30]

Code Pink co-founder Medea Benjamin is the president of the Benjamin Fund,[31] and co-founder of Global Exchange.[32]

Code Pink lists organizations such as the American Civil Liberties Union (ACLU), and the People’s Action Institute is its “allies.”[35]

Code Pink co-founder Jodie Evans has gone on record defending the actions of insurgents during the Iraq War, claiming the American government purposefully disrespected the people of Iraq, and those that fought U.S. troops were “cool” because they didn’t “back down.”[36]

She also claimed that the United States created the war on terror and that there were “no terrorists in Iraq.” According to Evans, the attacks of 9/11 happened because American bases were in Saudi Arabia.[37]

Code Pink co-founder Medea Benjamin lived in Communist-controlled Cuba from 1979 to 1983.[38] She praised the communist regime of Fidel Castro while living in Cuba, before being deported after she wrote an article against certain policies of the regime.[39]

During the 2016 presidential election, Benjamin praised Donald Trump after he denounced the Iraq War during a television debate. “I watched the debate last night and LOVED IT,” she said.[41]

The group has supported the actions of controversial anti-war demonstrator Cindy Sheehan, but Sheehan is not formally affiliated with Code Pink.[42]

Benjamin is also president of the Benjamin Fund,[43] and co-founder of Global Exchange,[44] which both fund Code Pink.

Code Pink is the business name for Environmentalism through Inspiration and Non-Violent Action,[45]  and is affiliated with Global Exchange and the Benjamin Fund due to Medea Benjamin’s top positions in all three organizations.

The organization also lists the American Civil Liberties Union (ACLU), the US Campaign to End the Israeli Occupation, the People’s Action Institute, and many left-of-center organizations as “allies.”[46]

It also lists Democracy Now!, the Guardian, the Huffington Post, and other left-of-center media outlets as “recommended media.”[47]