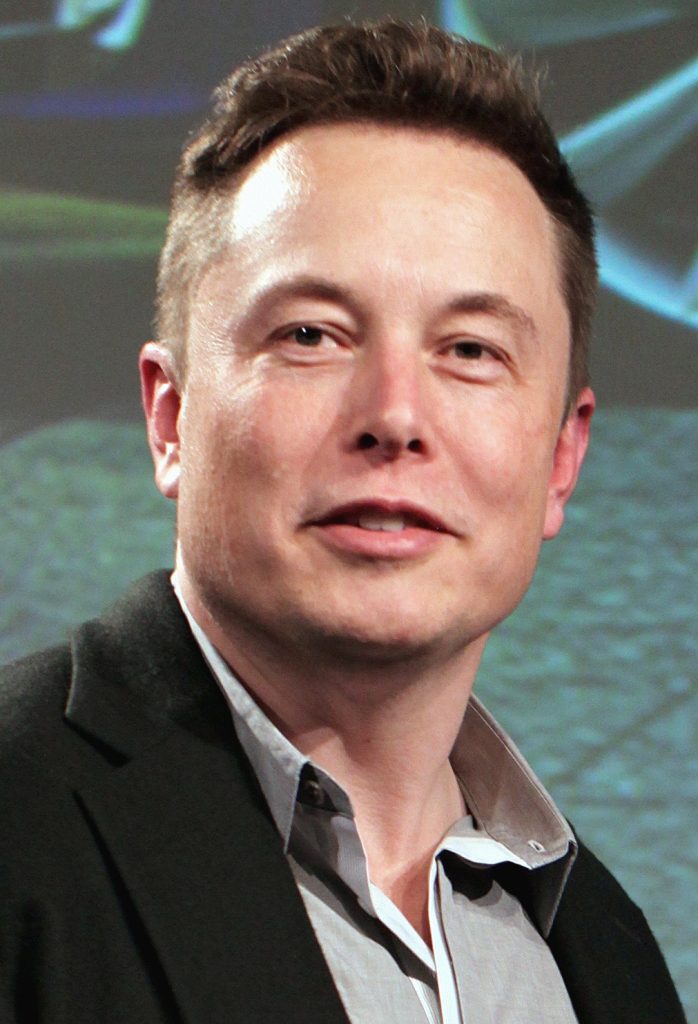 Musk at the 2015 Tesla Motors Annual Meeting (link) by Steve Jurvetson is licensed CC BY 2.0 (link)

Elon Musk is a South African-born American technology entrepreneur, investor, and philanthropist best known for his role as a founder or co-founder of a number of high-profile technology firms.

Musk is the chief executive officer, chairman, or a board member of a number of prominent firms across various industries, including SpaceX, a commercial spacecraft developer; The Boring Company, a logistics solutions firm; SolarCity, the largest producer of solar panels in the world; Tesla, an electric vehicle producer; and others.[1]

Musk is the 47th-richest person in the world, according to Bloomberg Billionaires Index (as of May 2018), and a regular donor to both Democratic and Republican Party candidates.[2] A self-described “half Democrat, half Republican” who is “somewhere in the middle,” Musk has supported both fiscally conservative and socially liberal causes and organizations through personal donations and grants from his private philanthropy, the Musk Foundation.[3]

Elon Reeve Musk was born on June 28, 1971 in Pretoria, South Africa. After attending the University of Pennsylvania, he dropped out to pursue an entrepreneurial career.

In 1995, Musk co-founded a web software firm called Zip2 with his brother, Kimbal. The brothers sold the company to Compaq in 1999, and Musk used the profits from the sale to found X.com—an email payment company—the same year.[4] X.com merged in 2000 with another online financial services firm, changing its name to PayPal in 2001.[5] Although Musk left his role as CEO of the growing company, he retained board membership and was the firm’s largest shareholder when PayPal was sold to eBay in 2002.[6]

In May 2002, Musk founded Space Exploration Technologies (more commonly known as SpaceX) in Hawthorne, California, with the goal of spurring human colonization of Mars and ultimately creating a “true spacefaring civilization.”[7] The firm has since grown to become the largest private manufacturer of rocket engines in the world.[8]

In 2004, Musk joined the board of directors as chairman of the fledgling electric car manufacturer Tesla, Inc. [9] In late 2008, he became CEO of the growing company.[10]

Tesla, Inc. acquired the solar power provider SolarCity—which was co-founded by two of Musk’s cousins in 2006—in 2016. Musk stated in 2006 that the creation of an electric car (and later, the acquisition of a major solar panel supplier) was partly spurred by his desire to address global warming as “a very serious issue.”[11]

Musk is a regular donor to candidates and political action committees from the Democratic and Republican parties. He has described his political views as “half Democrat, half Republican.” [12]

From December 2016 to June 2017, Musk served as a member of two of President Donald Trump’s presidential advisory committees: the Strategic and Policy Forum, and the Manufacturing Jobs Initiative. He resigned after President Trump announced his decision to withdraw the United States from the Paris Climate Accords climate change pseudo-treaty. [13] [14]

Musk has also supported Republican candidates for Congress and the Presidency. Since 2003, he has given $57,600 to Republicans including President George W. Bush, Sen. Lindsey Graham (SC), Sen. Marco Rubio (FL), and Rep. Kevin McCarthy (CA-23). Since 2004, Musk has donated $29,800 to Republican political action committees and nearly $213,000 to the National Republican Congressional Committee (NRCC).[16]

In 2018, a spokesperson for Musk announced that Musk had donated $6 million to the environmental group the Sierra Club, and wanted the donation to be made public by the environmentalist organization. The announcement was made in response to criticism by some Democrats after Musk donated $40,000 to a PAC supporting House Republicans.[17]

Space Exploration Technologies Corp., more commonly known as SpaceX, is an aerospace manufacturing firm started in 2002 by Musk in Hawthorne, California, and he is the firm’s chief executive officer.

SpaceX has also lobbied the 114th and 115th Congresses on ten pieces of legislation, mostly related to Department of Defense appropriations bills, Department of Homeland Security funding, and the American Space Commerce Free Enterprise Act of 2017. [19]

Under certain subsidies programs, customers were eligible to earn a $7,500 federal income tax credit for purchasing electric car. Customers purchasing electric cars in the state of California could earn an additional $2,500 rebate. [21] By 2015, Tesla buyers claimed an estimated $284 million in these subsidies. After the 2009 financial crisis, Tesla received a tax-payer funded loan of $465 million from the U.S. Department of Energy, which it used to build an electric car factory. [22] The federal government did not acquire stakes in Tesla Motors in exchange for the stimulus package.

Tesla’s $5 billion Nevada-based battery plant was supported by about $1.3 billion in state government subsidies, with sales tax, property tax, and business tax all waived for 10 or 20 years.[23] To afford this budget expenditure, the state of Nevada eliminated a tax break for insurance companies. According to the Zero Emission Vehicle Regulation, auto companies must earn a certain number of credits by manufacturing and selling zero-emission vehicles. California’s cap and tax program allows Tesla to sell their vehicle credits to other auto companies that do not meet their mandated credit quotas. Tesla has earned over $517 million by selling these environmental credits to competitors.[24]

Space X received about $20 million in subsidies from the state of Texas to build a launch facility. The company also signed $5.5 billion worth of government contracts with NASA and the United States Air Force. The State of New York spent $750 million for a Solar City solar panel factory in Buffalo. Solar City claims to have received $497.5 million in direct grants from the U.S. Treasury Department. [25]

In September 2017, the National Labor Relations Board filed a complaint against Tesla charging that the company had impeded attempts to promote unionization by the UAW. Tesla called the charges “baseless.”[27]

Elon Musk is the sole funder of the Musk Foundation, and has donated at least $257 million to the organization. [30]

According to its website, the Musk Foundation makes grants in support of four areas: “renewable energy research and advocacy;” “human space exploration research and advocacy;” “pediatric research;” and “science and engineering education.”[31] Recipients of Musk Foundation grants include international aid nonprofits such as Doctors Without Borders; healthcare organizations such as World Spine Care; and the co-educational Mirman School for Gifted Children.[32]

The Musk Foundation has also contributed to at least one right-of-center nonprofit, the libertarian-aligned Cato Institute.[35]

Musk is board president of the Ad Astra School, a Los Angeles, California-based tuition-free, “by-invitation-only” private school created in 2014. He is also a “substantial contributor to the school,” paying the “fair market value of the school’s tuition” for his five children who attend Ad Astra ($28,000 per child for a total of $140,000 in 2015).[36]

Musk is also a board member of World Spine Care, a multinational chiropractic service nonprofit; and World Space Week Association, the governing nonprofit which chooses the theme of the annual World Space Week holiday in October.[37] [38]