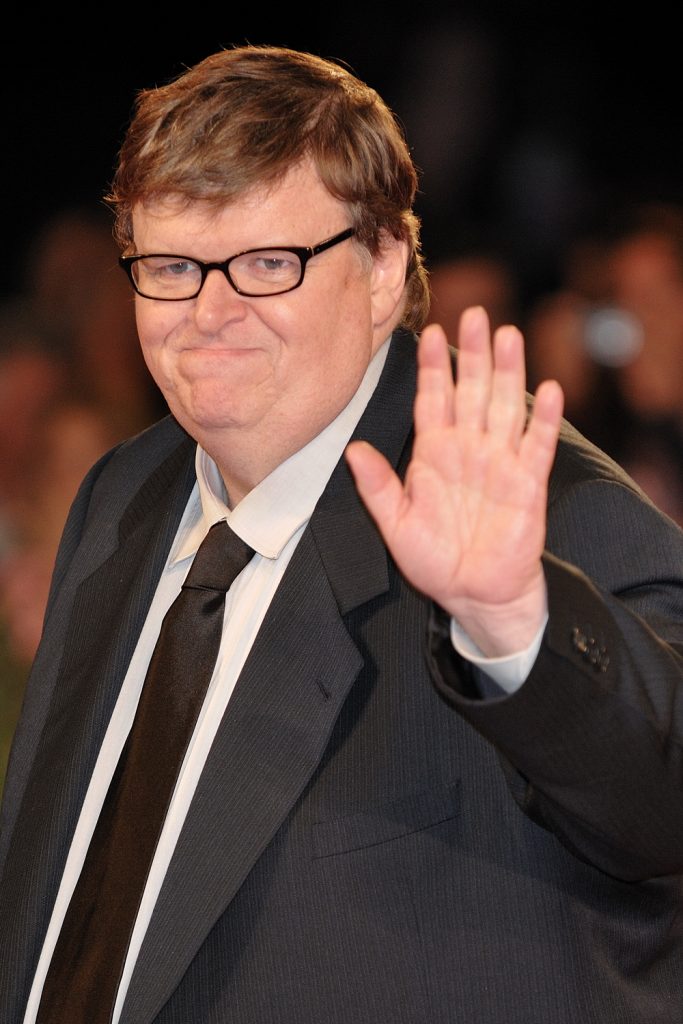 Michael Moore is a left-wing documentary filmmaker, former editor of the left-wing magazine Mother Jones, and liberal activist. Moore was born in an up-state Michigan bedroom community outside Flint, Michigan[1] and has fashioned himself as a blue-collar working class champion, even though he never worked a traditional factory job.[2] He has created a number of movies and books[3] with repetitive themes that lampoon Republicans and castigate capitalism while promoting Moore’s left-wing policy agenda. [4]

Moore has often been criticized for failing to adhere to the left-wing values that he advocates. Most notably, Moore blasts capitalism in almost all his works but with a reported net worth of approximately $50 million and nine houses,[5] critics claim that he “swapped his working-class life in Flint for limousine liberal digs on Manhattan’s Upper West Side”[6] and that he got rich off the capitalistic system that he purports to despise.[7] Similarly, Moore has been accused of running his businesses as a “sweatshop” and mistreating his employees.[8] Moore also claims to support labor unions, but on more than one occasion he has opposed unionization of his employees. [9]

Michael Francis Moore was born in Davison, Michigan (near Flint) in 1954.[13] His father, Frank Moore, was a union member line worker for General Motors,[14] and his mother,Veronica Wall-Moore, was a secretary.[15]

In 1972, Moore won a seat on the Davison school board at age 18. Moore dropped out of the University of Michigan-Flint after one year and founded a liberal newspaper, The Flint Voice (later expanded state-wide as the Michigan Voice).[16]

In 1986, Moore served a brief four-month stint as the editor of the left-wing San Francisco-based Mother Jones magazine but was quickly fired, allegedly for inadequate job performance.[17]  Senior Mother Jones staff members criticized Moore as being so rigidly ideological that he opposed publication of a legitimate article simply because he disagreed with its conclusions.[18] Moore eventually settled his $2 million wrongful termination lawsuit for $58,000, which he used as seed funding for his first film, Roger & Me.[19]

Moore has been widely criticized for the contrast between his significant person wealth his left-wing, redistributionist opinions regarding economics.

In 1997, former Moore ally Alexander Cockburn wrote a New York Press article excoriating Moore, pointing out that the left-wing filmmaker had attended his Flint movie premiere in a chauffeured stretch limousine and had written an entire page in his book belittling limousine drivers as “by and large … a creepy bunch.”[20]

During Moore’s 2014 divorce proceedings, it was revealed that in addition to his estimated $50 million net worth, he owned a 10,000-square-foot home on Torch Lake (valued at $2 million) and eight other properties across Michigan and New York, including a Manhattan condo that was once three apartments. [21]

Even Moore himself acknowledged the absurdity of his opulence. He was quoted in Salon saying, “average working stiffs were willing to pay seven bucks to see my movie. If they’re going to give me their money, what am I going to do with it? Get a big boat? I don’t think so.” The author noted, “Nope. He got a $1.27 million apartment instead.”[22]

In another report, the Weekly Standard quoted an unnamed studio source who claimed to have been berated for not flying Moore in first class or for expecting him to stay anywhere but the Four Seasons hotel. The source labeled Moore “the greediest man [he’d] ever met.”[23]

In a 2011 interview with CNN anchor Piers Morgan, Moore refused to accept that he was part of the richest one percent of Americans. Morgan said, “I need you to admit the bleeding obvious. I need you to sit here and say, ‘I’m in the one percent.’ Because it’s important.” Moore denied Morgan’s claim.[24] Appearing at a 2011 Occupy Portland rally, Moore called upon rich Americans to “give back” $1 million, but himself refused to answer questions about how much of his $50 million he was willing to contribute.[25]

The Weekly Standard has noted that many of Moore’s criticisms of poor working conditions in large corporations could just as easily be used to describe what it’s like to work for Michael Moore himself.[26] Quoting numerous former Moore employees, the article described the working conditions under Moore as “a sweatshop,” “a repressive police state,” “indentured servitude,” and “a concentration camp.” One former Moore-employed producer was quoted comparing a stint working for Moore to “working for [former Ugandan dictator] Idi Amin.”[27]

Another former employee said, “Moore became just another boss in a business that had an almost limitless tolerance for bad behavior,” describing him as selfish, self-absorbed, pouty, deeply conflicted, and a “huge a–hole.”[28]

Moore has ardently advocated in support of labor unions and union privileges.[29] In 2011 he opposed a Wisconsin law reforming government worker collective bargaining and tweeted that he would not hire any non-unionized staff on his future movies.[30] In 2012, he joined pro-union rallies in Wisconsin.[31]

However, on a number of occasions as a private employer Moore has been decidedly anti-union. A 2011 Weekly Standard article pointed out that the leftist Moore didn’t provide health benefits to some of his employees and would fight “tooth and nail to try to avoid paying writers in the Writers Guild [labor union].”[32]

Echoing this sentiment, Daniel Radosh wrote in Salon that Moore discouraged writers from joining the Writers Guild and that once they did join, writers relied on the union to secure payments, credits and residuals that Moore was allegedly “trying to screw them out of.”[33] Moore called this allegation a lie;[34] but the author quickly noted that a spokesman for the Writers Guild confirmed that on more than one occasion writers came to the Guild for help in dealing with what they perceived as Moore’s unfair treatment.[35]

According to a Mother Jones report, Moore threatened a pair of employees that if they joined the union, he’d “only be able to afford one” and would fire the other.[36]

Moore has produced or directed twelve documentaries and written eight non-fiction books, which have together grossed hundreds of millions of dollars worldwide.[37]

Despite the financial success of Moore’s enterprises, the left-leaning columnist from the Chicagoist blog noted that his movies generally speak only to like-minded liberals, “serving the Left in the same manner Fox News and AM talk radio serve the right.”[38]

Moore’s first movie, Roger & Me, was described as a sarcastic social commentary against a round of layoffs at General Motors. However, over the years, his extreme political beliefs have arguably reduced his movies and books into repetitive ideological “flamethrowers.”[39] In 1999, the Hartford Daily Courant wrote, “Moore’s tired routine has devolved into a bullying, pseudo-populist ‘Candid Camera.’” [40]

In Moore’s movie Capitalism: A Love Story, Moore argues that, “Capitalism is an evil… and you cannot regulate an evil. You have to eliminate it.”[41] He casts capitalism as responsible for the housing crisis, the recession, decaying cities and unemployment, and the bailout of financial firms at the expense of the middle class and in the end exhorts the audience to help him defeat the capitalist system.[42]

In his movie Sicko, Moore blasted America’s healthcare system as broken by greed. Moore later said that he hoped that the movie would inspire change towards a universal healthcare system.[43]

In the 2003 film Bowling For Columbine, which was billed as an anti-gun documentary, Moore implies through several hostile references to corporate greed, fraud and profits that manufacturing military hardware is to be blamed for gun violence in America.[44]

Fahrenheit 911 and his more recent works, Michael Moore in Trumpland and The Terms of Surrender, were openly partisan attacks against Republican Presidents George W. Bush and Donald Trump.

The unorthodox left-wing[45] author Christopher Hitchens wrote in Slate that “Fahrenheit 9/11 is a sinister exercise in moral frivolity, crudely disguised as an exercise in seriousness. It is also a spectacle of abject political cowardice masking itself as a demonstration of “dissenting” bravery.” Hitchens’s criticism was based on the fact that the film was based on a big lie and a big misrepresentation and sustained only by a dizzying succession of smaller falsehoods.[46]

The left-leaning fact-checking group Politifact has found that eight of those claims made in Moore’s movies were mostly or completely untrue.[47] For instance, Politifact twice found that Moore had overstated the popularity of socialism or socialist healthcare policies.[48]

Widely known as a liberal activist,[49] Moore has advocated left-wing positions on a wide array of hot-button political issues and often uses his celebrity to support these left-wing prerogatives.

In 2002, when Bowling for Columbine won the Academy Award for best documentary, Moore was widely criticized for using his award acceptance speech to lambast President George W. Bush as a “fictitious president.”[50]

Moore used an appearance on Larry King Live to criticize both then-Senator Obama and then-Senator Clinton’s healthcare plans for failing to propose universal government-run healthcare, and he proclaimed that health care was a “human right.”[51] On another occasion, Moore called for a single-payer national health insurance plan, under which the government would control and pay for from tax revenues all healthcare expenditure.[52]

In 2004, Moore called for a substantial tax increases.[53] He also said that he believes that the government should prevent companies from making fair profits and that corporations should have to pay “reparations” if they move operations overseas. [54]

In 2015, Moore accused police of practicing racial discrimination against African Americans, called for the release of all people jailed on drug sentences, and said that police should be disarmed.[55]

Since the 2016 election, Moore has consistently opposed President Trump. In January 2017, he joined the #DisruptJ20 movement which protested President Trump’s inauguration in Washington, D.C.[56] Moore and Trump argued on Twitter about Moore’s anti-Trump Broadway show: President Trump tweeted, “While not at all presidential I must point out that the Sloppy Michael Moore Show on Broadway was a TOTAL BOMB and was forced to close. Sad!”[57]

In 2017, Moore launched a one-man Broadway show opposing President Trump; after one performance, Moore loaded the attendees (including liberal Hollywood actors Mark Ruffalo and Olivia Wilde) onto buses headed for a demonstration at Trump Tower.[58] [59]

Similarly, in 2008, he endorsed then-Senator Barack Obama and again blasted Hillary Clinton because she voted for the War in Iraq.[61] In 2004, he supported anti-Iraq War retired Gen. Wesley Clark over John Kerry in the Democratic primary and was noted to have “almost exclusively favored third-party candidates in the past.” [62]

Since 2006, Moore has given $42,600 in large-dollar contributions exclusively to Democratic candidates and committees. His contribution history includes $5,000 to the Michigan Democratic State Party, over $6,000 to Gary Peters, $4,000 to Sheldon Whitehouse, and max-out contributions to Barack Obama for President, Joe Kennedy, Lon Johnson, Melissa Gilbert, and controversial Senator Robert Menendez.[63]

Michael Moore has a long history of making noxious political statements that have been widely criticized. In 2015, Moore was widely criticized when, in response to the unexpectedly popular Clint Eastwood movie American Sniper, Moore tweeted that snipers were cowards who “shoot u [sic] in the back.”[64]

Moore has also previously said that the McDonald’s two blocks from Ground Zero killed more people than the 9/11 hijackers, called for the arming of Palestinians to allow them to attack Israel, and claimed that “the factories of GM, Ford, and Chrysler produced some of the greatest weapons of mass destruction responsible for global warming and the melting of our polar icecaps.”[65]

On March 3rd, 2021, Michael Moore took to Twitter to joke that Texans should not receive the COVID vaccine since they allegedly thought the pandemic was a hoax. This came in response to the Texas government lifting its mask mandate and social gathering restrictions. [66] He then followed up with a series of tweets placing blame on Texas politicians, arguing the rest of the country should be protected from them and that they are “Killing them, and it’s killing us,” regarding Texas’ minority population. [67][68]