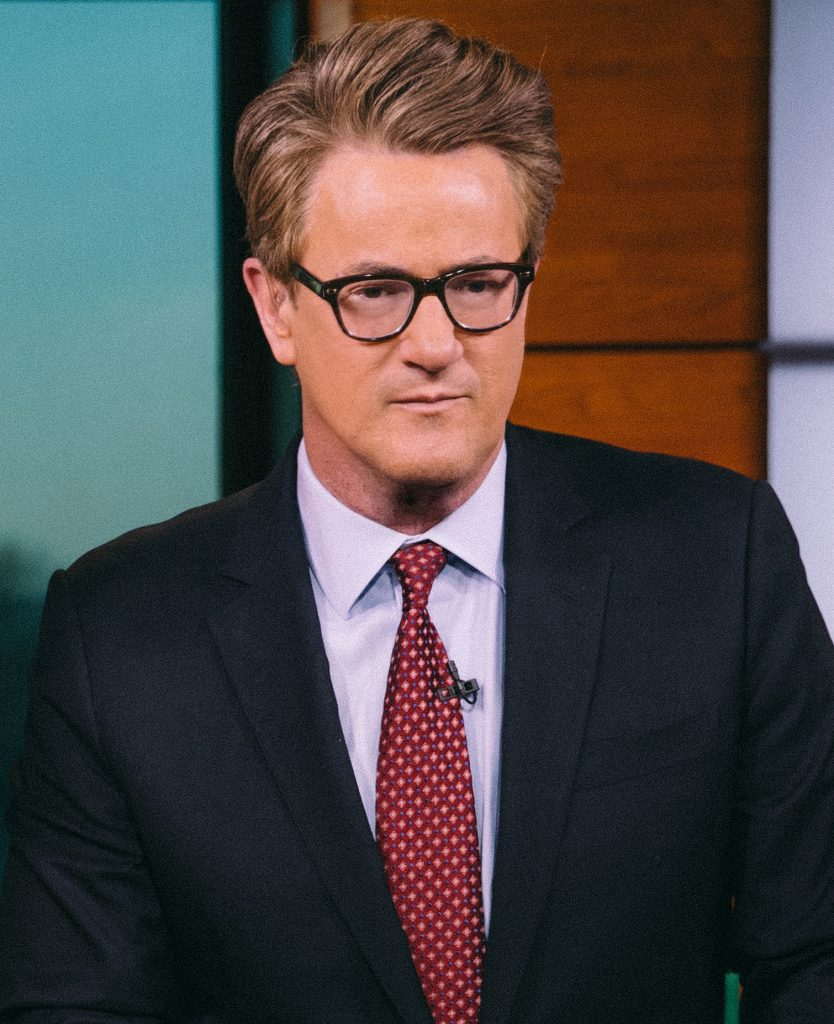 Joe Scarborough is an attorney, former U.S. Representative, and a media personality who hosts the MSNBC show “Morning Joe” with Mika Brzezinski. Scarborough was elected to Congress as a Republican from Florida in 1994, 1996, 1998, and 2000, resigning in 2001; since that time, he has left the Republican Party, feuded with former President Donald Trump (R) after having granted Trump unusual access to and favorable coverage on his show as a primary candidate, and married Brzezinski.

During his time in Congress, Scarborough had a conservative reputation as a supporter of Rep. Newt Gingrich’s (R-GA) “Contract with America.” Scarborough has described himself as “almost libertarian” on economic issues, but “quirky” and generally not aligned with either party on many other issues. [1] In July 2017, Scarborough announced that he was leaving the Republican Party and now considers himself to be an independent.

Scarborough and Brzezinski had a feud with President Donald Trump (R) throughout his time in office, though “Morning Joe” had provided favorable coverage to his campaign for the Republican presidential nomination. [2]

One of Scarborough’s children with Hinton is diagnosed with Asperger’s, a form of autism. In 2005, Scarborough interviewed environmentalist and anti-vaccine conspiracy theorist Robert F. Kennedy, Jr. on his “Scarborough Country” MSNBC program. Both Kennedy and Scarborough expressed concern that autism is linked to vaccination, a claim rejected by medical authorities. [5]

In 1991, Joe Scarborough began practicing law in Pensacola, Florida. In 1993, Scarborough defended Michael F. Griffin, a family friend who was accused and convicted of murdering an obstetrician to prevent him from performing abortions. Scarborough appeared in court numerous times on Griffin’s behalf, but eventually recused himself from the case, though he continued to advise Griffin and recommended other attorneys. [6] Also in 1993, Scarborough successfully led opposition to a proposal to raise property taxes in Pensacola by 65%. His efforts raised his profile for his political career. [7]

In 1994, Joe Scarborough ran for Congress in Florida’s First District. He would later claim that he was motivated to run by a “visceral dislike” of then-President Bill Clinton. [8] While running, Scarborough signed the Contract with America, a conservative legislative pact authored by Reps. Newt Gingrich (R-GA) and Dick Armey (R-TX). The Contract was seen as vital in turning the national political tide and ushering in a Republican Congressional majority. Upon winning his election with 61% of the vote, Scarborough became the first Republican Congressman in the district in 120 years. Scarborough would be reelected in 1996, 1998, and 2000. [9]

Based on his voting record, Gov Track rated Scarborough as a middle-of-the-pack conservative Republican. [10] In his freshman term, Scarborough was known as one of forty “New Federalists” in Congress who ardently supported Gingrich’s conservative insurrection. However, Scarborough has resented his image as a “Gingrich lieutenant” and has stated that he and Gingrich did not get along. While in Congress, he voted to impeach President Clinton, abolish the Department of Education, pull the United States out of the United Nations, defund the Corporation for Public Broadcasting, and cut funding for AIDS research. [11][12]

According to New York magazine, Scarborough “lost interest” in Congress in the late 1990s and began spending more time on side projects, including playing with his band, “Regular Joe,” and launching newspapers in Florida. One newspaper profile commented on finding bottles of vodka in Scarborough’s congressional office. [13][14]

In 2001, Scarborough announced his resignation from office five months into his fourth term. His official reason for resigning was to spend more time with his children. [15]

After leaving Congress, Joe Scarborough briefly returned to practice law in Florida. In 2002, he was appointed to the 21st Century Workforce Council by President George W. Bush (R). [16]

In November 2019, Joe Scarborough was suspended from MSNBC for two days after it was discovered that he had made eight campaign donations of $500 each to friends and family members running for office without getting approval from network executives. Liberal MSNBC pundit Keith Olbermann received a similar suspension. [18]

In 2015, Scarborough and then-presidential candidate Donald Trump were considered to have warm relations as Trump appeared on “Morning Joe” numerous times. Their relationship would steadily sour throughout the presidential election and subsequent presidency as Scarborough became one of President Trump’s most notorious enemies in the media. [19]

During Trump’s campaign, Scarborough was criticized for providing Trump with favorable coverage and softball interviews during the primary campaign,[20] though Scarborough was highly critical of Trump’s proposed ban on Muslim immigration. During the general election, Scarborough became more critical of Trump, and after the election, President Trump invited Scarborough and Maria Brzezinski to the White House for a dinner at which President Trump complained about his treatment by the media. The meal allegedly broke down into a heated argument. [21]

In May 2020, President Trump sent a series of Tweets that insofar as facts can be determined falsely accused Scarborough of having had an affair with a staffer while in Congress and then murdering her to keep it a secret. Staffer Lori Klausutis died of head trauma after hitting a desk in Scarbourough’s office in 2001, the same year he resigned from office; the conspiracy theory had been promoted in the past by Democratic critics of Scarborough, including documentary filmmaker Michael Moore. [23] However, Klaustis hit her head after fainting from an undiagnosed heart condition and President Trump’s claims appear to be baseless. [24] Klaustis’s widow condemned President Trump’s Tweets. Despite public outrage, Twitter refused to remove the Tweets until President Trump’s account was suspended in 2021. [25]