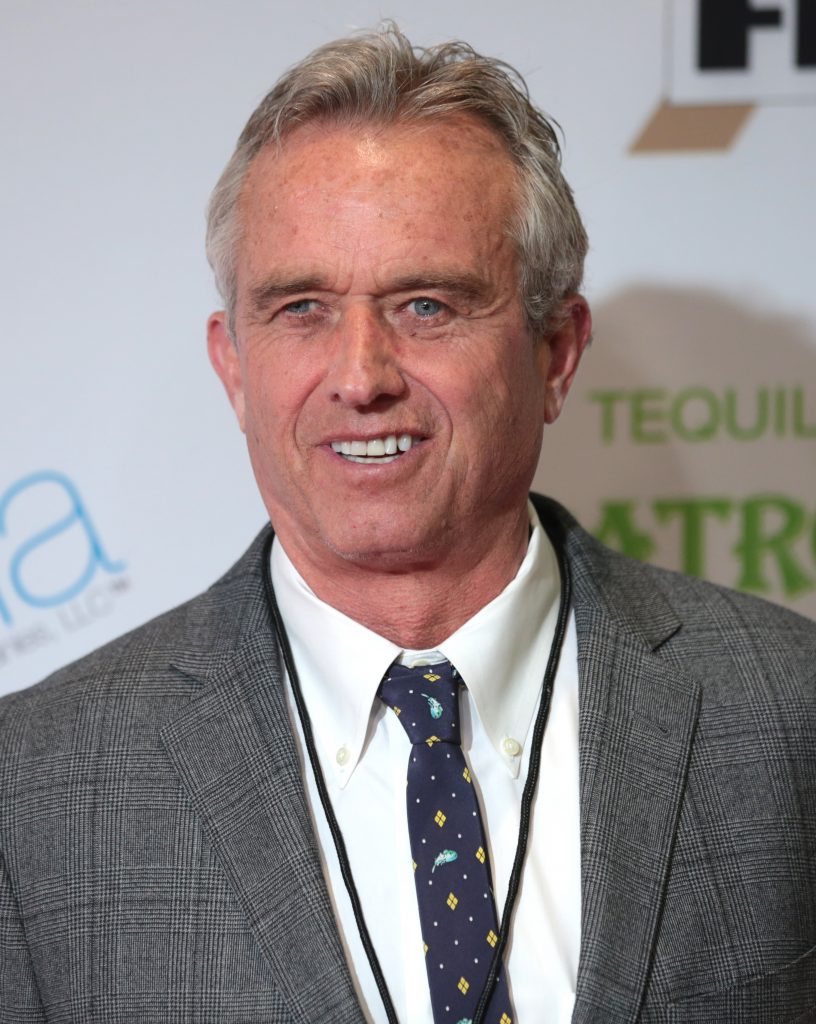 Robert F. Kennedy, Jr., son of former U.S. Senator Robert F. Kennedy (D-N.Y.) and a member of the Kennedy political family, heads the Waterkeeper Alliance, a national environmentalist organization. Kennedy has been criticized for using his family name and position to spread conspiracy theories alleging a link between certain vaccines and autism.[1] He has also faced criticism for hypocrisy for opposing wind-energy projects that would spoil the view from the Kennedy family compound despite Waterkeeper’s pro-renewable energy stance.[2]

Kennedy entered environmental activism in the 1980s as part of a community service obligation following a heroin arrest, aligning with the Hudson River Foundation (later Hudson Riverkeeper).[3] Kennedy created the Waterkeeper Alliance in 1999 and installed himself as president. That group, which sues businesses, governments, and individuals under environmental laws, has since grown into a network of member groups numbering close to 300.[4]

Kennedy has become notorious for a salacious personal life and a history of anti-vaccine movement activism. Kennedy is said to be a serial philanderer, having reportedly kept a journal of his adulterous liaisons.[7] His anti-vaccine efforts date back at least to 2005, when he published an error-riddled piece in Salon and Rolling Stone. In 2015, he called vaccination “a holocaust” in a speech in Sacramento.[8]

He was reportedly considered by the Obama administration to be head of the Environmental Protection Agency, but he was not selected.[9]

Kennedy’s introduction to the environmentalist movement stemmed from a plea bargain for heroin possession in 1984. He was sentenced to 1500 hours of community service, which he completed at the Hudson River Foundation, a group later absorbed by Hudson Riverkeeper.[10] Kennedy quickly became Hudson Riverkeeper’s chief prosecuting attorney after completing his volunteer work. Fifteen years later he would start Waterkeeper Alliance as part of the environmental umbrella.[11]

He also founded the Environmental Litigation Clinic at Pace University in White Plains, New York, which works primarily for Hudson Riverkeeper.[12] The New York Times called Kennedy “an aggressive litigator,” after he sued New York City numerous times over what he deemed its failure to adequately prevent pollution in its watershed. His work helped push the 1997 Watershed Memorandum of Agreement, which required NYC to spend $1 billion in taxpayer money over a decade to ensure its water supply was safe.[13]

Shortly after the turn of the 2000s, Kennedy and Hudson Riverkeeper founder Robert Boyle had a falling out. Kennedy had hired William Wegner as a staff scientist. Boyle objected to Wegner’s hiring since he had served time in federal prison for smuggling rare birds from Australia to the United States.[14]

Boyle and his supporters on the Riverkeeper board lost a vote to oust Wegner, who had offered to resign but had been rebuffed by Kennedy. Boyle’s supporters resigned en masse, giving control of Hudson Riverkeeper to Kennedy and his allies.[15]

In 1999, Kennedy and representatives of other “keeper” groups inspired by Hudson Riverkeeper formed the Waterkeeper Alliance to coordinate programs and activities.[16] Kennedy has headed the Alliance since at least 2000.[17]

Under Kennedy, the national group has focused on litigation against farmers, first targeting pork producers before turning to chicken farms. Major efforts to target pork producers under the often-abused Racketeer Influenced and Corrupt Organizations Act were rejected by a federal judge in the mid-2000s.[18] A subsequent effort to attack chicken farmers in Maryland a publicly funded law clinic was also rejected by courts.[19]

Kennedy has long called for America to move away from fossil fuel dependence to alternative sources of energy like solar and wind, but he fought against a plan that would build giant wind turbines miles off the cost of Cape Cod.[21] As Kennedy wrote op-eds in publications like the New York Times criticizing the plan, critics noted the turbines would have been visible on the horizon near the Kennedy family home in Hyannis.[22]

Kennedy unsuccessfully implored Washington state voters to implement a carbon tax on fossil fuels, as ballot measure Initiative 732 only garnered 41 percent of the vote in the 2016 general election.[23] In an op-ed, Kennedy demonized oil companies for their profits of the past decade, accusing energy companies of paralyzing Congress with campaign contributions. “While Americans suffer, big polluters are getting away with murder and getting rich in the process,” Kennedy said.[24] On Nov. 15, 2016, Kennedy joined with protesters in Cannon Ball, North Dakota, to protest against the Dakota Access pipeline.[25]

Kennedy has also served as senior attorney for the Natural Resources Defense Council, a group formed in 1970 to advocate for pro-environmental policies.[26] According to diaries alleged to be Kennedy’s by the New York Post, Kennedy spoke with Leonardo DiCaprio in 2001 about becoming involved in environmentalism; the actor is now a member of NRDC’s Board of Trustees.[27]

Kennedy has received criticism for aggressively arguing the debunked proposition that vaccinations may be linked to autism in children.[28] The Centers for Disease Control and Prevention, American Academy of Pediatrics, and Institute of Medicine have all said there is no evidence to link vaccines or vaccine preservatives with brain disorders.[29]

In 2005, Kennedy published “Deadly Immunity,” a story for Rolling Stone and Salon that claimed government health agencies had colluded with the titans of the pharmaceutical world to hide the dangers of vaccines and vaccine preservatives from the public.[30] Rolling Stone made corrections after Kennedy was accused of quoting material out of context, and Salon eventually retracted the story in 2011. “I regret we didn’t move on this more quickly, as evidence continued to emerge debunking the vaccines and autism link,” said then-Salon editor-at-large Joan Walsh.[31]

Kennedy has maintained his debunked belief in a vaccine-autism link. In 2014, Kennedy joined with Mark Hyman, a controversial physician who has worked for the Clinton family, to edit a book on vaccine preservatives that conspiracy theorists have claimed may cause autism.[32] In late 2016, he founded the World Mercury Project, partnering with actor Robert DeNiro to offer a purported $100,000 reward for “proof” vaccines were safe.[33]

In January 2017, he claimed that then-President-Elect Donald Trump, who has a widely criticized history of making similar claims, would appoint him to head a panel to “investigate” vaccine safety. The Trump transition team denied Kennedy’s statement.[34]

Kennedy has had a notably difficult personal life, with repeated allegations of marital infidelity and a periodic battle with drug abuse. Kennedy has been married three times, divorcing his first wife, Emily Black, one month before marrying Mary Richardson, then six months pregnant, in 1994.[35] Kennedy, who reportedly engaged in numerous infidelities, would file for divorce from Richardson in 2010, but the divorce was not finalized before Richardson committed suicide in 2012.[36] In 2014, Kennedy married Cheryl Hines.[37]

According to diaries alleged by the New York Post to have been Kennedy’s from the early 2000s, Kennedy would routinely record his infidelities during his marriage to Richardson.[38] He was reportedly deposed in divorce proceedings surrounding one of his alleged mistresses.[39]