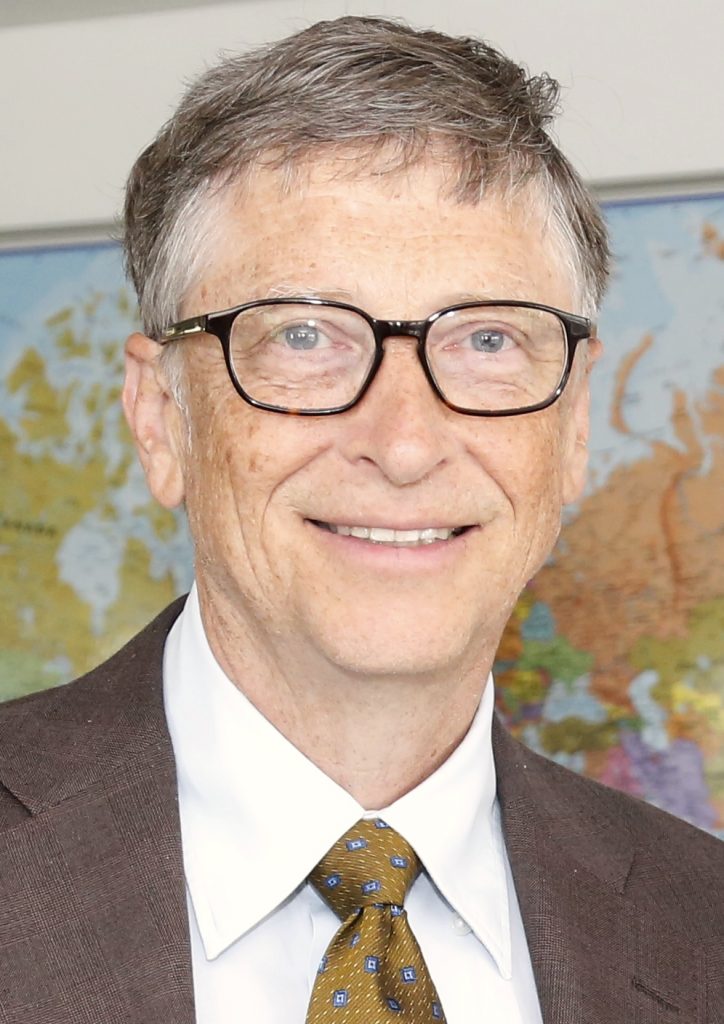 Since founding Microsoft in the 1970s, Gates has become one of the world’s wealthiest and most influential individuals, previously holding the title of world’s wealthiest person. [1] His “Giving Pledge” to give away all of his money during his lifetime inspired a number of the world’s billionaires to promise to do the same, including investor and fellow left-leaning business leader Warren Buffett. [2]

Gates was one of three children raised in Seattle, Washington by a business executive mother and attorney father. He began writing computer software by the time he was in junior high, and in high school co-founded his first small business, Traf-O-Data, a traffic-counting system with his future Microsoft co-founder Paul Allen. [3]

In 1975, Gates dropped out of Harvard University so that he and Allen could write software for personal computers, then called “microcomputers.” [4] Allen and Gates later founded Microsoft, which turned Gates into the world’s then-youngest-ever billionaire at 31 and, by the time he was 39, the world’s wealthiest man. [5]

Gates is also a best-selling author, being credited with authoring The Road Ahead. Written in 1995, it was a New York Times bestseller which examined the future of the computer world, including the then-new internet. [6] In 1999, Gates authored Business @ the Speed of Thought, also a bestseller. [7]

Bill Gates met his future wife in 1987 when she began working at Microsoft. They were married in 1994, when he was 38 and she was 29. They reportedly got engaged after Gates put the pros and cons of marrying Melinda on a whiteboard. [8] They have three children and share co-chair positions in the Bill and Melinda Gates Foundation with Bill’s father. [9]

U2 frontman Bono and the Gates’ were named Time Persons of the Year in 2005 for their charitable work. [10]

Gates founded Microsoft with Allen in 1975 in Arizona. [11] While many other companies focused on the then-new computer age’s hardware, Microsoft became a leader in software. The company was founded as Micro-Soft before the hyphen was removed. It earned over a $1 million in annual revenue by 1978. [12] It grossed $16 million by 1981. [13]

Microsoft was moved to Seattle, Washington in 1979, where it became a leader in the early era of computer software. [14] Its first major client was IBM, after Gates purchased a third-party company’s software program, changed it to become MS-DOS software, and licensed it to IBM. [15] Microsoft’s licensing model eventually became its major revenue generator. [16] Gates’ mother allegedly helped Microsoft land its initial IBM deal. [17]

By 1983, 30 percent of the world’s computers were run on Microsoft software and the company had offices in several countries. This was also the year in which poor health forced Allen to leave Microsoft. Two years later, Microsoft launched its Windows program to beat out competitor Apple, leading to a lawsuit which lasted for years. Apple accused Microsoft of illegally basing Windows off of Apple’s new Macintosh system. Apple’s lawsuit was eventually thrown out in court in the 1990s. [18]

In 1989, Microsoft had improved its Windows program and launched the Microsoft Office suite of programs. [19] It also went public in 1986, generating $61 million with its initial public offering. [20] By the mid-1990s, Windows programs were running on 85 percent of the world’s computers, and in 1999 it grossed nearly $20 billion per year, with Gates’ wealth estimated at $90 billion. [21] Gates held the status of world’s wealthiest person until 2008, a title he has reclaimed periodically including in 2019 thanks to Microsoft’s strong performance that year. [22]

Microsoft was federally sued for illegal monopolist practices in 1998, and the company was found guilty in court in 1999. A 2002 settlement led to changes in the company’s processes, though lawsuits elsewhere have continued. [23] Microsoft was also sued by 20 state Attorneys General for the same reason. [24]

Legal troubles were just the start to more than 10 years of Microsoft’s struggles. The changing customer market, competition, and transitions to online technologies hurt the company. Several poor product launches, an allegedly poor company culture under CEO Steve Ballmer, and other factors hurt its growth and its dominance in the market. [25] However, under new CEO Satya Nadella, the company grossed over $125 billion in 2019, in part thanks to buyouts of companies like Skype and GitHub, but also due to more successful adjustments to the 21st century computer world. [26] [27]

The company also secured a $10 billion Department of Defense contract in 2019, though a lawsuit from Amazon held up the contract as of early 2020. Amazon claims that the contract bidding process was unfair because of President Donald Trump’s attacks on Amazon and its CEO, Jeff Bezos. [28]

In addition to its technology and business leadership, Microsoft is also a major participant in left-of-center philanthropic activity. Its direct and indirect financial and hardware donations totaled more than $2 billion in 2019, with tens of millions more dollars promised for future endeavors. The company is engaged in dozens of nations in a variety of technology, environmentalist, educational, and other efforts, including supporting the Paris Climate Accords and engaging in water security endeavors. [29] [30]

Microsoft also engages directly in politics. Its political action committee donated to dozens of congressional candidates in both parties in the first half of 2019, totaling $274,000, and it made over $112,000 in corporate political organization donations during the same time period. In 2018, the company spent approximately eight million dollars and nine million dollars to influence state and federal policies, respectively. [31]

Gates has held several roles at Microsoft since 2000. He stepped down as CEO that year and became chief software architect until 2008, at which point he stepped down to focus more on philanthropy. He was board chair until 2014, at which point he became a board member and a technology advisor. [33] He is one of only three people who have served as CEO of Microsoft; Steve Ballmer held the position from 2000 to 2014, and Satya Nadella has held it since 2014. [34]

Gates formally stepped down from Microsoft’s board and from the board of Warren Buffett’s investment firm Berkshire Hathaway in March 2020. [35]

The Bill and Melinda Gates Foundation is the world’s largest private foundation as of April 2020, with assets totaling $46 billion. [36] Originally, the Foundation was named for Bill Gates’ father, William H. Gates, who managed the Foundation’s day-to-day operations before becoming co-chair. [37] [38]

The Foundation engages in five broad categories of philanthropy[39]:

Most of the Foundation’s work is not obviously politicized, focusing on health issues like malaria prevention and treatment, vaccine development and distribution, and combatting HIV/AIDS overseas. [40] In 2010, the Gates pledged $10 billion to vaccine research, testing, creation, and more by 2020. [41] Both Gates and the Foundation received significant attention in 2020 during the COVID-19 pandemic because of Gates’ support for social distancing and vaccines, as well as a coronavirus vaccine which the Foundation helped fund into testing. [42] [43] The Foundation is also funding the creation of seven centers to mass-produce a COVID-19 vaccine once one has been developed. [44]

The Foundation has coordinated, organized, and/or influenced the creation of major international no-governmental organizations which are dedicated to its areas of focus, especially health care and vaccination. [45]

However, the Foundation has drawn criticism for its “gender equality” and “women’s empowerment” efforts, especially its family planning and contraception campaigns, from abortion advocates and opponents. The organization has funded abortion groups such as International Planned Parenthood. [46] While its funding is earmarked to not be used for abortions, pro-life advocates have argued that its funding still facilitates abortions. [47] Melinda Gates, however, wrote in 2014 that abortion is a separate issue from birth control, leading to criticism from abortion advocates. [48] [49]

The Foundation also helped develop Common Core education standards as part of its billions in education investments, and worked with the Obama administration to implement them. [50] [51]

Gates founded Cascade Investments, in which he holds both his personal and the Foundation’s investments. [53] He also founded TerraPower, a research group focused on creating more nuclear energy. [54]

Bill and Melinda Gates and Warren Buffett created the Giving Pledge in 2010. It is a non-binding promise made by billionaires or those who would be billionaires if not for philanthropic efforts to give away most of their money either before they die or in their wills. [55] There are approximately 200 signatories from around the world. [56]

Gates is involved in a number of business ventures, including, but not limited to, being the largest shareholder in AutoNation. [57] He was an early investor in the satellite-based video start-up EarthNow. [58] He owns the philanthropic and business incubator Gates Ventures, which was originally founded in 2008 as a think tank. [59]

Gates’ political views appear to be mixed. He is famous for supporting intellectual property rights, a viewpoint which is anathema to many “open source” liberals and to a significant percentage of coders, software engineers, and others in the technology space. [61]

Gates believes that climate change is a major threat to humanity, and has focused major Foundation attention and money to the issue. [62] He wrote a book which is set for publication in 2021 about climate change. [63] He supports Common Core education standards and opposed the Trump administration’s Mexico City Policy, which prohibits federal funds from supporting organizations that advocate for abortions. [64]

Gates criticized U.S. Senator Elizabeth Warren’s (D-MA) wealth tax and said he would consider voting for President Trump if she were the Democratic nominee. [65] However, he supports taxing the wealthy as part of a progressive tax system. [66]

Gates also criticized the Trump administration’s withdrawal of money from the World Health Organization after the international organization used misleading Chinese government data about the COVID-19 pandemic. [67] He and Melinda wrote in 2018 that they support same-sex relationships and self-described gender definitions. [68] Gates has held meetings with President Donald Trump, including one in 2018 to urge the president to support greater U.S. foreign aid. [69] He also discussed vaccines, innovation, education, and other issues with Trump in another meeting. [70]

Gates is also supportive of the idea that Earth is overpopulated. He and Melinda responded in 2018 to the idea that by saving children’s lives in poor nations they are contributing to overpopulation. [71] Gates’ father led a chapter of Planned Parenthood, and he has spoken well of the abortion group in addition to providing contraceptive and abortifacient funds to abortion groups internationally. [72]

In February 2021, during an interview on “60 Minutes,” Gates told Anderson Cooper that the world should reduce its carbon emissions to zero, saying it would be “the most amazing thing mankind has ever done.” [73] Just a month earlier, Gates joined a bidding war to buy the world’s largest private jet company, despite private jets being some of the world’s greatest carbon emitters. [74]

Bill Gates’ impact through business, philanthropy, and politics has been significant. Microsoft defined the burgeoning computer industry for 25 years and continues to impact the technology industry, businesses, and consumers. Gates has accomplished his original goal of putting a computer in every home, as well as in government agencies, educational facilities, and elsewhere throughout the world. [75]

However, Gates’ record is and will continue to be controversial in certain circles. He was accused by government agencies around the world and competitors of engaging in cutthroat, often unethical, practices as Microsoft CEO, which led to lawsuits and other actions. [76] [77] His left-of-center political views make him controversial among conservatives. [78] Meanwhile, left-of-center political observers and academics have accused the Foundation of putting its own priorities, and those of corporations, in front of the real needs of those to whom it is providing assistance. [79] [80]