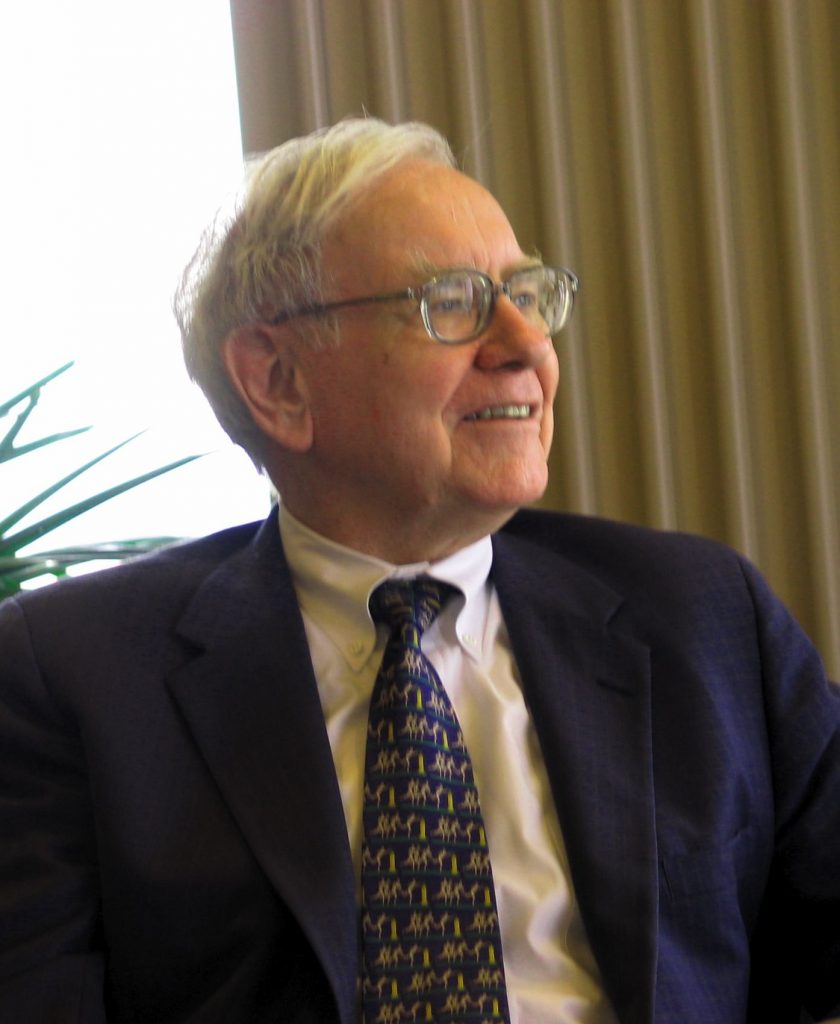 Warren Buffett speaking to a group of students from the University of Kansas School of Business (link) by Mark Hirschey is licensed CC BY-SA 2.0 (link)

Warren Buffett is the chief executive of investment corporation Berkshire Hathaway and is credited as one of the most successful investors of all time.[1]  According to Forbes, Buffett was the second-richest person in the world in 2017, with an estimated net worth exceeding $75 billion.[2]

Though he claims to eschew “huge” political checks, Buffet has given substantial contributions to liberal political candidates and committees, including a $25,000 check to Hillary Clinton’s super PAC. Moreover, he opposes calls for transparency on his corporations’ political giving, and foundations he funds have pledged to give hundreds of thousands of dollars to liberal organizations supported by the liberal mega-donor conglomerate Democracy Alliance.

With fellow center-left philanthropist Bill Gates, Buffett launched The Giving Pledge, asking billionaires to donate their wealth.[3]  He has been a vocal advocate of tax increases – which eventually led to President Barack Obama naming a tax-hike proposal the “Buffett Rule” after his supporter.[4]

Buffett’s political interventions are not necessarily all public-spirited. Buffett reportedly “reaped billions”[5] from a $133 billion Wall Street bailout  that he championed and has since made approximately $14.7 billion from “special deals” he negotiated during the 2008-2009 financial collapse. [6]

Buffett is known as perhaps the most successful investor of all time.  Routinely referred to as the “Oracle of Omaha”, his company, Berkshire Hathaway, owns more than 60 companies, including Geico, Duracell and Dairy Queen. His current net worth exceeds $75 billion.[7]

In 2006, Buffett disclosed his intention to gradually give away his fortune to five foundations, including the Bill and Melinda Gates Foundation. Then in 2010, Buffett and the Gates announced their creation of the “giving pledge,” an effort to get “the 400 wealthiest Americans, to pledge — literally pledge — at least 50% of their net worth to charity during their lifetimes or at death.”[8]

In a 2011 New York Times op-ed, Warren Buffett asked Congress to “raise [tax] rates immediately” on very wealthy individuals like him.[9] Buffett’s op-ed prompted President Obama to roll out a so-called “Buffet Rule” that would apply a minimum tax rate of 30% to all those making over $1 million a year.[10]

Conservative economist Arthur Laffer cast Buffett’s proposal to raise taxes on the rich as hypocritical because “Buffett shields almost the entirety of his true income from federal income taxation, and he makes clear his belief that he can do more good with his wealth than Uncle Sam.” Moreover, Laffer argued that because Buffett shields the majority of his money, the “effective tax rate on his true income would hardly budge if this ‘Buffett Rule’ were applied.”[13]

Additionally, Buffett has set conditions so that his billion-dollar donations to the Bill and Melinda Gates foundation “ continue to satisfy legal requirements qualifying my gifts as charitable and not subject to gift or other taxes.”[14]

Buffet helped to finance “Burger King’s [then-]proposed move to Canada” in order “to avoid the burden of U.S. taxes.”[15]

Critics have noted the inherent hypocrisy in “Buffett demands that his taxes be raised” even though his fund “reaped billions from the 2008 bank bailout and the 2009 stimulus.”[16]

Buffett “champion[ed]” a federal government bailout of Wall Street banks, even though he would be the “leading beneficiary” of said Wall Street bailout.” A February 2011 Vanity Fair article calculated “that Berkshire Hathaway had $26 billion invested in companies that received $133 billion in government stimulus subsidies.”[17]

Subsequently, it was reported that Buffett made approximately $14.7 billion through “special deals he made with ailing financial titans in connection with the 2008-09 financial crisis.”[18]

Observers noted that Buffett “regularly lobbies for higher estate taxes” while owning life insurance companies that “rely on the death tax in order to sell their estate-planning businesses.” Moreover, Buffett has “repeatedly bought up family businesses forced to sell because the heirs’ death-tax bill exceeded the business’s liquid assets.”[19]

Buffet once praised the profits cigarettes would generate because of their addictive nature saying, “I’ll tell you why I like the cigarette business. It costs a penny to make. Sell it for a dollar. It’s addictive. And there’s fantastic brand loyalty.”[20]

In 2015, “a scathing investigation by the Seattle Times and the Center for Public Integrity” alleged that a giant mobile-home company owned by Buffett’s Berkshire Hathaway was “duping poor people into unscrupulous loans.”[21] The report said that the company owned by Buffet’s firm, “relies on predatory sales practices, exorbitant fees, and interest rates that can exceed 15 percent, trapping many buyers in loans they can’t afford and in homes that are almost impossible to sell or refinance.”[22]

While Buffett has claimed not to identify with either party, he served on Barack Obama’s transition team.[23] In 2015, Buffett gave “$25,000 to Ready for Hillary,” a Super PAC backing Hillary Clinton” and said he “strongly supports her and expects she’ll win.” Buffett also said that he planned “to help raise money for her campaign.”[24] In 2016, Buffett was the featured guest at a joint fundraiser for Hillary Clinton and the Democratic National Committee.[25]

In 2015, the NoVo Foundation, a foundation run by Buffett’s son and daughter-in-law and backed by “nearly $400 million” in Berkshire Hathaway stock including $150 million that Buffett personally donated in 2014, signed on as a “partner” with the liberal donor conglomerate Democracy Alliance, thereby committing to give at least $200,000 per year to the group’s “supported organizations.”[27]

Prior to joining the Democracy alliance, the NoVo Foundation had given over $14 million to a number of liberal organizations that were already partners with or supported by the Democracy Alliance, including the Rockefeller Family Fund, the Tides Foundation, Color of Change, National People’s Action, and the New Organizing Institute Education Fund.[28]