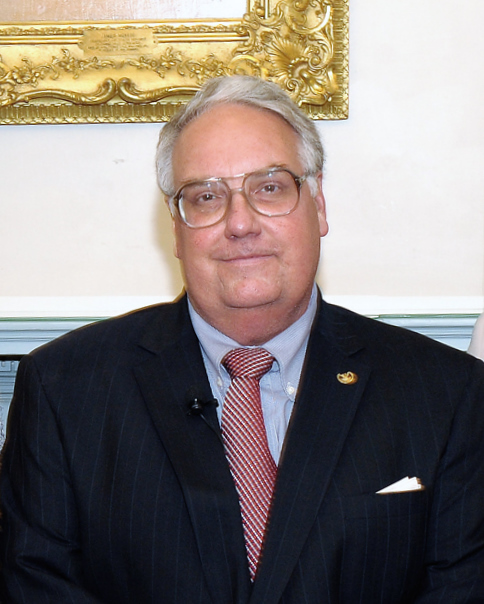 Howard Graham Buffett is the second son of billionaire investor Warren Buffett. He has served as a director of numerous major companies (some of which are part-owned by his father’s company, Berkshire Hathaway), worked in industrial agriculture, and operates the Howard G. Buffett Foundation.

Howard G. Buffet is the son of billionaire investor Warren Buffett and his first wife, Susan Thompson Buffett. Born on December 16, 1954, Buffett dropped out of three different colleges and worked a series of odd jobs before becoming a farmer for most of his professional life. [1] Buffett is married to Devon Goss and has five children. [2]

Buffett farms 400 acres of his own in Nebraska, while also overseeing a 1,500-acre farm in Illinois. [3] His philanthropic organization, the Howard G. Buffett Foundation, also has three research farms which Buffett oversees in Arizona, Illinois, and Nebraska, totaling 9500 acres. [4]

Buffett has worked or volunteered in local law enforcement for years: In 2017, he was appointed Sheriff of Macon County, Illinois. [5]

Outside of his public work, Buffett has served on several corporate boards, including Archer Daniels Midland, The Coca-Cola Company, Coca-Cola Enterprises, Inc., ConAgra Foods, Lindsay Corporation, Agro Tech Foods, and Sloan Implement. [6] Buffett has also served on the board of Berkshire Hathaway, his father’s company, since 1992. Warren Buffet has suggested that he wants Howard to serve as his successor as the company’s next non-executive chairman. [7]

In 1988, Buffett was elected to a position on the Douglas County, Nebraska Board of Commissioners and served a single term ending in 1992. [8]

Buffett is also an author who has written eight books on conservation and human life, in addition to articles for publications like The Wall Street Journal and The Washington Post. [9]

The Foundation is well known internationally for its projects in food security, specifically in Africa. Buffett has taken an active role in promoting a “Brown Revolution” which focuses on soil fertility and sustainable agriculture. [11] To fuel this “revolution,” Buffett started the Sequoia Farm Foundation out of the Howard G. Buffett Foundation in 2013. [12] The Sequoia Farm Foundation is a separate research firm, which focuses on innovating technology to increase food security through soil preservation. [13]

Buffett’s personal interest in United States law enforcement has directed his foundation’s grantmaking. According to Buffett, the absence of a stable legal order is at the center of nearly every issue. [14] In 2017 alone, the Buffett Foundation gave $8.6 million in grants to US local and state law enforcement agencies. [15]

Howard G. Buffett is the only member of the Buffett family to register as a Republican. [16] Buffett has held public office, serving both as a sheriff in Illinois and as a member of the Douglas County, Nebraska Board of Commissioners from 1989-1992.

Though his foundation focuses primarily on international issues, Buffett personally focuses on one large domestic issue: border security. [17] Buffett owns a ranch in Cochise County, Arizona, and his property ends 300 yards from the Mexico border. [18] Over the past several years, Buffett has given tens of millions of dollars to the Cochise County Sheriff’s Office, in addition to arming a private volunteer organization and privately employing law enforcement officers. [19] In spite of his focus on border security, Buffett has remained critical of President Donald Trump, calling his border wall proposal “simplistic.” [20] In his 2018 book Our 50-State Border Crisis: How the Mexican Border Fuels the Drug Epidemic in America’s Heartland, Buffett argued that illegal immigration along the Mexican border fuels the drug trade. [21] In 2018, the Buffett Foundation pledged $30 million to social service and rehabilitation programs in Decatur, Illinois to fight addiction. [22]

Though Buffett says that he is a Republican, Buffett has made political contributions to candidates across the political spectrum with no apparent loyalty to one party. Even in the same state, Buffett does not donate along party lines, giving to both Democrats and Republicans in Nebraska. [23] More recently, Buffett has given to Democrats, including donations to U.S. Senator Heidi Heitkamp (D-ND) in 2017 and to Barack Obama’s 2008 Presidential campaign. [24] In the same year that Buffett donated to Heitkamp’s campaign, he also gave to Republican Senator Jeff Flake of Arizona. [25] Buffett’s political contributions have been relatively small, with only 34 donations reported by the Federal Election Commission in the last 28 years totaling less than $50,000. [26]