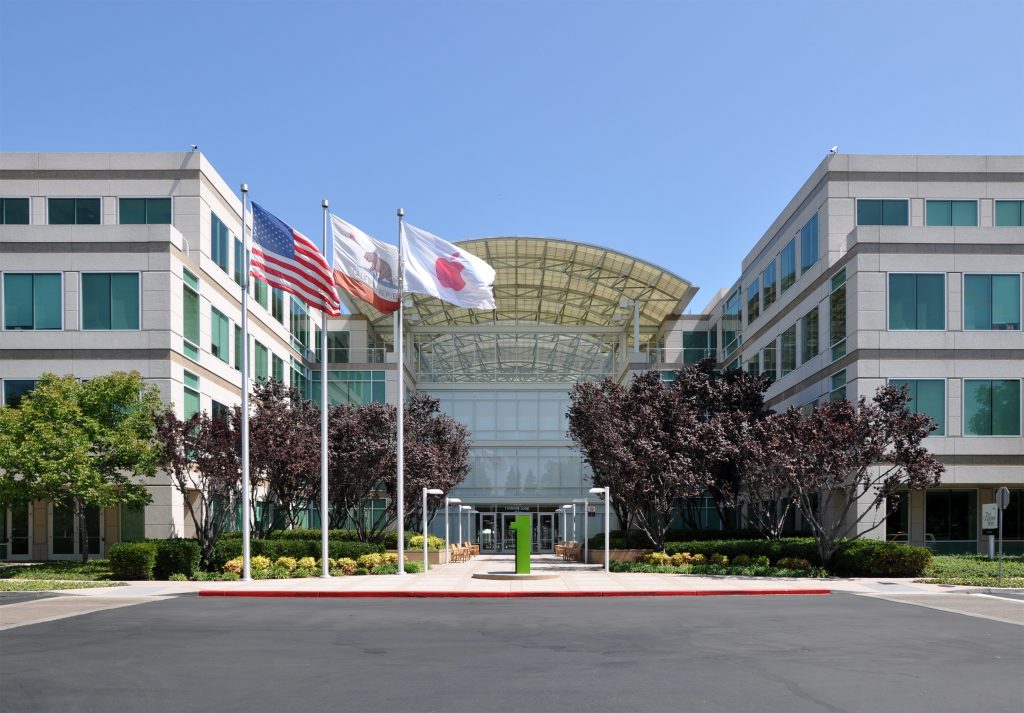 Since the resignation and death of Jobs in 2011, Apple under CEO Tim Cook has become one of the most dominant technology companies in the world, rivaling Google, Microsoft, and Amazon. As of January 2021, Apple was the second-largest company in the world, with a market capitalization of $2.2 trillion. [2]

Apple, like many other major technology companies, has drawn criticism from the political left for allegedly anti-competitive practices, tax avoidance, and poor treatment of its workers and from the right for alleged censorship of right-of-center ideas. Apple professes to be a strong proponent of user privacy and has protected its user data both from corporate and government intrusions. [3]

Apple Computers Inc. was founded in 1976 by computer scientists Steve Jobs and Steve Wozniak and businessman Ronald Wayne. The company was envisioned as a high-quality boutique computer manufacturing firm. Twelve days after the company’s establishment, Wayne sold his 10% share for $500. [4]

Jobs and Wozniak barely stayed above bankruptcy with the manufacture of the Apple I, which sold for $666.66 in the mid-1970s. They followed up with the Apple II, one of the most advanced computers on the market which initially struggled to sell at the extremely high price point of $1,300. The computer found success with the development of the software VisiCalc, the first digital spreadsheet for personal computers. [5]

In 1983, Apple released the Lisa, another high-end, high-priced computer which became one of Apple’s greatest commercial failures. The following year, Apple released the Macintosh, a smaller and more affordable machine which became the company’s first mainstream success. The tension between the two products led to a rift between Jobs and Apple CEO John Sculley, whom Jobs had brought to the company in 1983 from PepsiCo. In early 1985, Woznick left the company to pursue other projects. In September 1985, Jobs resigned under pressure from Scully and the board and left with a number of high-level Apple employees to form NeXT Inc. [6]

Without Jobs and Wozniak, Apple repositioned its focus on the lower end of the consumer electronics market. The company reached new revenue heights in the late 1980s and early 90s with updated models of the Macintosh. Profitability declined in the mid-90s despite a greater quantity of product development. Microsoft slowly took market share from Apple as it expanded into the hardware space and eventually emerged as the dominant personal computing company. [7]

In 1997, Apple acquired NeXT and rehired Steve Jobs. Jobs soon became CEO and took over product development with designer Jony Ive. Over the following years, Apple designed a new Macintosh, opened its first retail store, launched the iPod, and acquired SoundJam MP, which would become iTunes. From 2003 to 2006, Apple’s stock price increased ten-fold. [8]

In August 2011, Steve Jobs resigned as CEO of Apple six months after receiving a liver transplant. The following month, Jobs died of complications related to cancer. Tim Cook took over as CEO. [10]

Steve Jobs was the co-founder and intermittent CEO of Apple, as well as the chief designer of many of the company’s most famous products. Jobs was also the founder and CEO of NeXT and Pixar. [11]

Jobs was largely apolitical (though an occasional contributor to Democratic candidates and committees) and kept Apple’s interaction with the political system to a minimum during his second term as CEO from 1997-2011. In 2009, Apple spent just $1.5 million on lobbying compared to $7 million from Microsoft and $15 million from AT&T. [12]

In February 2011, Jobs met with then-President Barack Obama. Jobs reportedly told President Obama that the United States had an engineer shortage, and he advised the creation of a visa program to allow foreigners who earned engineering degrees to stay in the United States. [13]

Steve Wozniak was the co-founder of Apple and its chief technical designer until 1985. He has since worked in numerous posts at technology start-ups and in academia. [15]

Wozniak has made 21 political donations since 1991. Most have gone to Democratic candidates and committees, including presidential candidate and then-U.S. Senator John Kerry (D-MA), President Obama, and MoveOn.org. He has also donated to Republican President George W. Bush and U.S. Representative Ron Paul (R-TX). [16]

In 2015, Wozniak announced that he was endorsing U.S. Senator Bernie Sanders (D-VT) in the presidential race. [17] In 2018, Wozniak shifted positions, claiming that he supported many of then-President Donald Trump’s policies but personally disliked the president. [18]

Tim Cook has been the CEO of Apple since Steve Jobs’ departure in 2011. Previously, he had worked at Apple since 1998. [19] In October 2014, Cook became the first Fortune 500 CEO to publicly come out as gay. He does not consider himself a gay activist. [20]

Lisa Jackson has been Apple’s vice president for environment, policy, and social initiatives since 2013. She currently leads Apple’s $100 million Racial Equity and Justice Initiative. Prior to joining Apple, she served as Administrator of the U.S. Environmental Protection Agency (EPA) under President Obama from 2009 until 2013. She also served as chief of staff to Governor Jon Corzine (D—NJ) and as the Commissioner on Environmental Protection of New Jersey. [23]

HKmap.live was an app used by pro-democracy activists to coordinate protests against the Chinese government in Hong Kong. In October 2019, Apple rejected an application for HKmap.live to be distributed on its App Store. A week later, Apple reversed its rejection, and then a few days later, Apple banned the app from the store. In a public statement, Apple claimed the app endangered the police and citizens of Hong Kong. [24]

On October 18, 2019, seven U.S. Senators and Representatives signed a letter condemning Apple for the app ban, accusing the company of bowing to the demands of an authoritarian foreign government. The signatories included U.S. Senators Ted Cruz (R-TX), Tom Cotton (R-AR), Ron Wyden (R-OR), and Marco Rubio (R-FL), alongside U.S. Representatives Mike Gallagher (R-WI), Tom Malinowski (D-NJ), and Alexandria Ocasio-Cortez (D-NY). The cooperation between Sen. Cruz and Rep. Ocasio-Cortez, who are frequently considered to be on opposite ends of the political spectrum, attracted much media attention. [25]

Apple professes a commitment to user privacy. Its website declares privacy a “fundamental human right” and a “core value” of the company. [26] Apple has refused to collect data from its users, even at the expense of its product development. According to technology journalist Tim Hardwick, Apple’s virtual assistant, Siri, has lagged behind competing applications from Google and Amazon due to a lack of inputted user data. [27]

On December 2, 2015, a gunman opened fire at an office complex in San Bernardino, California, killing 14 and wounding 22. In the aftermath, the U.S. Federal Bureau of Investigation (FBI) ordered Apple to unlock the shooter’s iPhone to ascertain his motives and potential accomplices. Citing corporate privacy policy, Apple refused and filed a legal injunction against the order. Apple was ultimately successful in blocking the order, drawing support from civil libertarians and criticism from law enforcement. [28]

On December 6, 2019, a gunman opened fire at the Naval Air Station in Pensacola, Florida, killing three men and injuring eight. Once again, the FBI asked Apple for permission to access the assailant’s iPhone, and Apple refused. [29]

Apple has been criticized for unsafe and unfair labor practices. In 2006, the Mail reported on a Chinese factory that manufactures iPods employing 200,000 workers who slept in the factory at the expense of half of their wages. The employees worked for up to 15 hours per day for as little as $50 per month. [30]

In 2010, 18 employees at the Foxconn complex in Shenzhen, China attempted to commit suicide, with 14 succeeding. Foxconn was an electronics supplier for Apple and other tech companies, drawing criticism to the companies for contracting with abusive foreign companies. [31] Apple apologized for the labor conditions and launched an investigation into Foxconn, finding numerous violations of international labor agreements, including child labor. [32]

In 2014, the Institute for Global Labour and Human Rights conducted an investigation into Chinese technology factories, many of which supplied Apple products, and found dire conditions, including 65-hour workweeks, plywood beds in massive dormitories, and thousands of instances of employees choosing to sleep rather than eat during lunch breaks. Apple apologized for the violations and promised to tighten its labor regulations. [33]

Apple has been accused of engaging in tax avoidance schemes. In 2012, the New York Times reported that Apple avoided paying billions of dollars in corporate taxes by strategically locating small offices with a handful of employees in states and cities adjacent to their real offices. For instance, at the time, Apple paid state-level corporate taxes in Nevada, which has no corporate taxes, by maintaining a small office in Reno. The move allowed Apple to avoid paying the 8.84% corporate tax rate in California, where it is headquartered. In 2011, Apple paid $8.3 billion in taxes on $34.2 billion in income. [34]

In 2013, Apple was summoned in front of the U.S. Senate to answer questions on its overseas tax accounting. CEO Tim Cook denied accusations of tax evasion and claimed that Apple followed both the letter and spirit of the law. [35]

Apple has primarily used Ireland in its tax-base shifting strategy. The company opened its first manufacturing plants in Ireland in 1980 and steadily expanded operations throughout two decades. By 2014, Apple’s Irish operations ran through two subsidiaries, one of which is legally based out of Bermuda, a known tax haven. Using complex accounting practices, Apple funneled €110.8 million of non-US revenue through the subsidiaries and managed to pay an effective corporate tax rate between 0.005-1%. [36]

In 2016, the European Union (EU) determined that the Irish government violated terms in the EU multinational agreement by giving illegal tax benefits to Apple. [37] The EU then sued Apple and the Irish government for €13 billion in taxes owed. In July 2020, the European General Court ruled in favor of Apple and Ireland, finding that the government’s policies toward Apple did not violate its EU agreements. [38]

In January 2018, the Trump administration adjusted long-standing international tax rules. Previously, American-based companies were tax-exempt on income earned abroad as long as the funds were not transferred back to the US. The new rule applied the standard income tax on earning, regardless of where the cash was ultimately sent. In response, Apple announced that it would pay $38 billion in additional taxes to the US government that year. [39]

Apple has been accused of engaging in anti-competitive business practices. Most notably, Apple has strict licensing requirements for individuals and organizations who are authorized to repair Apple products. As of 2019, only individuals and enterprises with an Apple license could gain access to Apple parts for repairs and abide by product warranties. [40] Apple has since loosened this policy. [41]

Apple PACs and employees donated $8,726,449 to politicians in the 2020 election cycle, the 64th most of any organization. The largest recipient was then-presidential candidate Joe Biden, who received $1.9 million, followed by U.S. Senator Bernie Sanders (D-VT) who received almost $500,000, and the DNC Services Corp which received $425,000. Then-U.S. Senate candidates Raphael Warnock (D-GA) and Jon Ossoff (D-GA) each received around $300,000. The Republican National Committee (RNC) received $220,000, and then-President Donald Trump received $117,000. [43]

In the 2016 election cycle, Apple employees donated $671,000 to Democratic presidential candidate Hillary Clinton and $131,000 to Sen. Sanders for his presidential campaign. President Trump received just over $5,000. [44]

As of 2018, 60 U.S. Representatives and Senators own stock in Apple. The largest shareholder is U.S. Speaker of the House Nancy Pelosi (D-CA), who owns between $5.3 million and $25.5 million in Apple stock. The next largest shareholders are U.S. Senators Sheldon Whitehouse (D-RI) and John Hoeven (R-ND). [49]