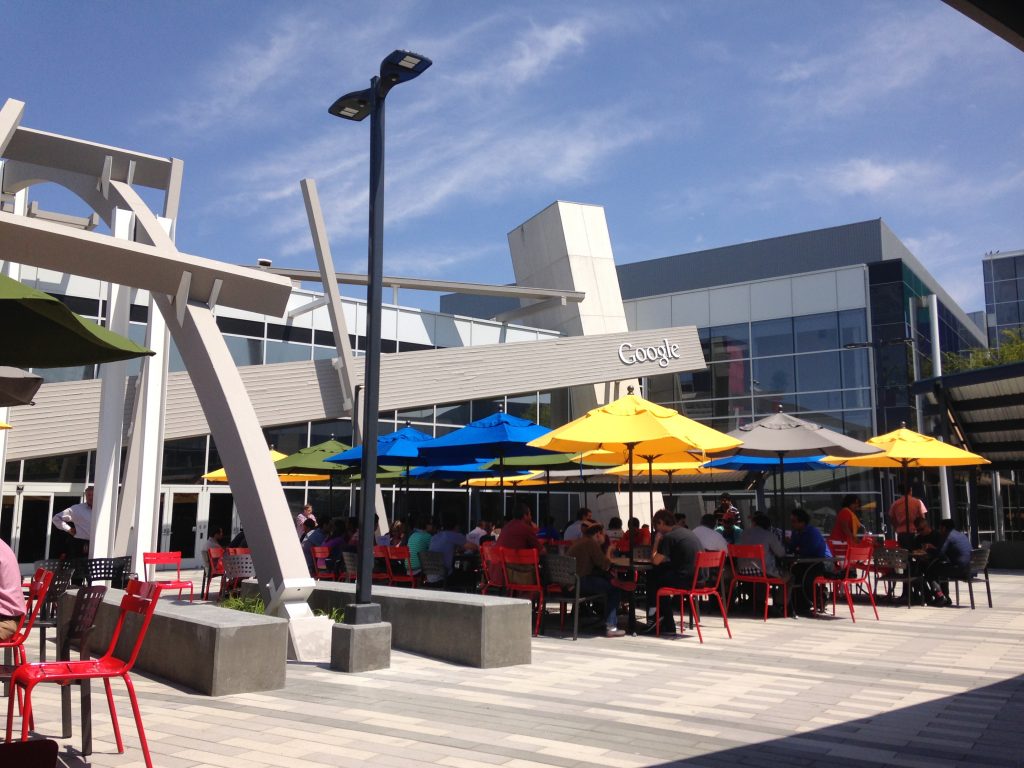 Google is a Mountain View, California-based multinational technology company and subsidiary of Alphabet, Inc. Google is considered one of the Big Four technology companies which includes Facebook, Apple, and Amazon. [1]

The company was founded by Larry Page and Sergey Brin in 1998 while both were Ph.D. students at Stanford University. Google is led by Sundar Pinchai who took over as CEO in 2015. [2] [3]

Google best known for its eponymous search engine. The search engine has become one of the most visited sites in the world.

In 2018, Google announced that it would not renew a contract with the U.S. Department of Defense after employees protested partnering with the American military. [4]

At a Congressional hearing in 2019, Chairman of the Joint Chiefs of Staff Gen. Joseph Dunford alleged the company’s work in China was “indirectly benefiting the Chinese military.” [5]

Google has faced criticism for its collection and handling of private user information. Google officials testified before Congress in 2019 regarding the collection of location data by its Android mobile operating system,[6] the company acknowledged that its “Google Home Mini” devices had inadvertently collected more information than users intended,[7] and users of the Gmail email service objected to the company analyzing email text for advertising purposes. [8]

Google has faced claims that it manipulates its search results for political and business ends. In June 2017, the European Union placed a 2.7 billion dollar fine against Google for manipulating search results to support its own products. [9]

In the last months before the 2016 election, researchers at the American Institute for Behavioral Research and Technology and Northeastern University performed research on Google search results discovering that they overwhelmingly favored Clinton. In a USA Today op-ed, Robert Epstein, lead researcher and Clinton supporter, wrote, “I led a team that used objective methods to preserve 13,207 online election-related searches and the 98,044 web pages to which the search results linked. These data showed that Google’s search results favored Hillary Clinton (whom I supported) in all 10 positions on the first page of search results—enough, perhaps to have shifted two or three million votes in her direction over time.” [10] [11]

In December 2018, Sundar Pinchai testified to the House Judiciary Committee responding to claims that Google breached privacy and manipulated search results in favor of left-wing causes and candidates. [12]

Google has faced criticism for having a workplace that is not diverse from a demographic or ideological perspective. As of 2014, the company’s internal assessments found that most Google employees were men and that few were African American or Hispanic. [15]

In July 2017, Google fired software engineer James Damore after an internal memo he wrote titled “Google’s Ideological Echo Chamber” arguing that many of the challenges facing diversity in the workplace involved innate differences between men and women rather than discrimination was released. [16] He also argued that Google was a political echo chamber limiting the speech of their conservative employees. As a result, Damore filed a lawsuit and National Labor Relations Board complaint against the company. The National Labor Relations Board ruled in favor of Google. Damore’s lawsuit moved out of court and into arbitration in October 2018. [17] [18] [19]

In 2018, numerous Google employees staged a protest against what they alleged was insufficient handling of sexual misconduct complaints by the company. [20]

In 2019, Google fired employee John Wacker, who had managed an internal message board for Republican-leaning employees of the company. In public commentary before his firing, Wacker alleged that Google’s human resources staff inconsistently applied rules and that other Google employees had weaponized the human resources process to attack conservative-leaning employees. After his firing, Wacker alleged he had been targeted for his beliefs. [21]

While the company’s official PAC is politically divided, a 2018 GovPredict study claimed that over 90 percent of political donations from employees at Google or Google-related companies goes to Democrats. [26]

Pichai Sundarajan, commonly known as Sundar Pichai, is the CEO of Google. Prior to becoming CEO, he was Product Chief at Google and a management consultant for McKinsey and Company. [27] Pichai donates primarily to Google Inc. PAC and makes contributions of over $30,000 to both NRSC and DSCC. [28]

Larry Page is the current CEO of Alphabet, Inc., the parent company of Google. Page rarely donates to political candidates, but donates overwhelmingly to Democrats. Page is a financial supporter of many left-wing causes to include a $40,000 contribution in favor of same-sex marriage in California [29] and $1 million to the unsuccessful 2006 Proposition 87 which would have taxed oil producers to fund alternative energy research. [30]

Sergey Brin is the current president of Alphabet, Inc., the parent company of Google. After the 2016 election, far-right website Breitbart leaked a video of a group meeting of Google executives including Page and Brin criticizing the election results and President Trump to a room full of employees. [31] Brin notably donated $100,000 in support of state recognition of same-sex marriage. [32]