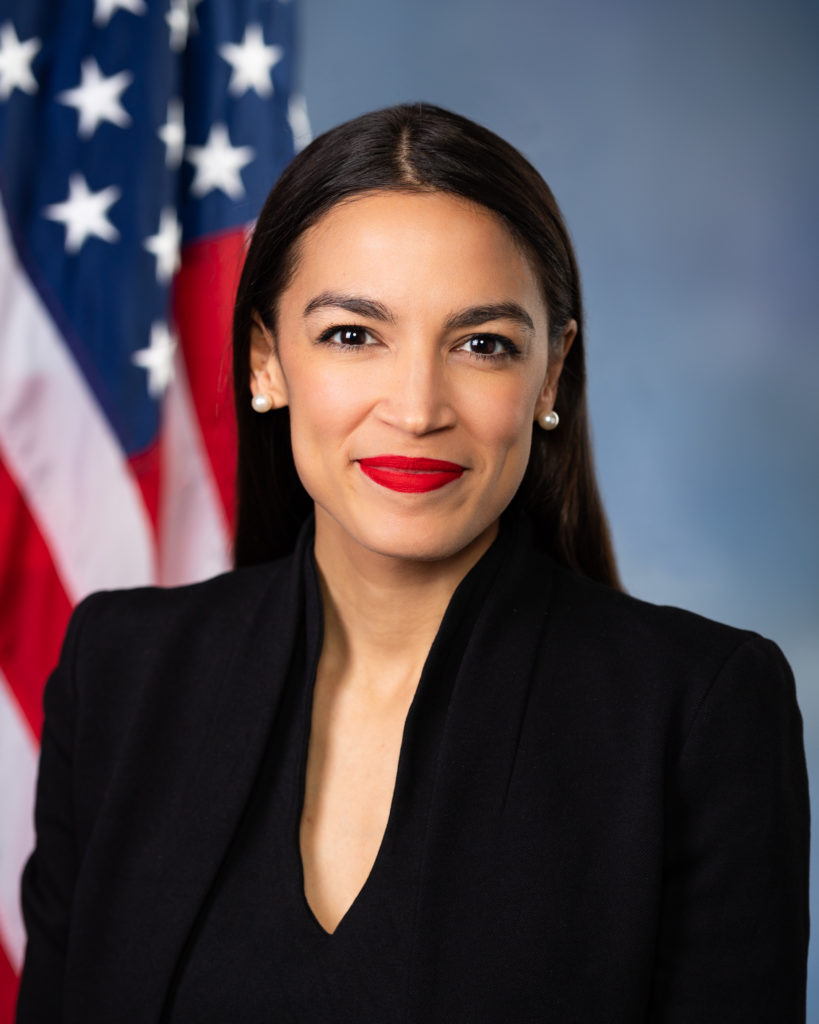 Alexandria Ocasio-Cortez, also known as “AOC,” is a Democratic politician and leader of the radical left of the Party. In 2018, she was elected U.S. Representative for New York’s 14th District located in the Bronx and Queens. First elected at 28 years old, Ocasio-Cortez is as of mid-2020 the youngest woman ever elected to Congress.

Ocasio-Cortez is a self-identified democratic socialist and a member of the Democratic Socialists of America (DSA). She is a member of “The Squad,” a group of radical-left-aligned U.S. Representatives, along with fellow DSA member  Rep. Rashida Tlaib (D-MI), controversial U.S. Rep. Ilhan Omar (D-MN), and left-wing Boston-area U.S. Rep. Ayanna Pressley (D-MA). Ocasio-Cortez is considered a leader of the far-left wing of the Democratic Party and a potential harbinger of a leftward trend in the party led by its youngest members.

In 2019, she proposed the Green New Deal legislation in Congress along with Senator Ed Markey (D-MA).

Ocasio-Cortez was born in the Bronx in 1989 to Puerto Rican parents. Her father owned an architecture company and her mother, who was born in Puerto Rico, was a housekeeper. [1] Ocasio-Cortez moved to Yorktown Heights, an affluent suburb north of New York City, when she was five years old. Ocasio-Cortez attended Yorktown High School where she became involved in the National Hispanic Institute (NHI), a nonprofit which trains Hispanic individuals for community leadership. [2][3]

After college, Ocasio-Cortez moved to the Bronx and worked as a bartender, waitress, house cleaner, and bus driver. [5]

In 2012, Ocasio-Cortez founded Brook Avenue Press, a publishing firm for books that portrayed Brooklyn in a positive light. The firm was founded with the financial assistance of the Sunshine Bronx Business Incubator, a city-subsidized entrepreneurship incubator. Broom Avenue Press closed in 2017, but as of May 2020, the company owed $2,088.78 in corporate taxes to New York State. [6]

In 2018, Ocasio-Cortez was recruited by Brand New Congress, a far-left PAC founded by Bernie Sanders campaign operatives, to run for Congress from New York’s 14th District. She was the first primary opponent of incumbent Rep. Joe Crowley (D-NY), since 2004. At the time, Ocasio-Cortez was working as a bartender and waitress. [8]

Ocasio-Cortez’s campaign was seen as a challenge from the left-wing of the Democratic Party against the left-of-center establishment. While Crowley received endorsements from New York’s governor and both senators, Ocasio-Cortez was supported by numerous left-wing and far-left organizations, including the Democratic Socialists of America, MoveOn,[9] Democracy for America, People for Bernie,[10] Black Lives Matter, and Justice Democrats. [11] Ocasio-Cortez remained in close contact with the National Hispanic Institute and served as its educational director for numerous programs, including while running the campaign. [12]

Despite grassroots support, Ocasio-Cortez was outspent 18-1. [13] Crowley refused to show up to the one scheduled debate and sent former city councilman Annabel Palma (D-Bronx) in his place. [14]

Ocasio-Cortez’s victory over Crowley by fifteen percentage points was a huge surprise to pundits and political forecasters. The Guardian called her election “one of the biggest political upsets in recent American history” and a sign that the Democratic Party could be moving further left. [15] Ocasio-Cortez became the “second most talked-about politician in America” after President Trump, her Twitter followers rose from 49,000 to 3.5 million, and she was put on the cover of Time. [16]

Ocasio-Cortez won the general election with 78% of the vote against Republican Anthony Papas, an economics professor at St. John’s University who did not actively campaign. [17]

Since her election, Ocasio-Cortez has been one of the highest-profile members of Congress. [18] She is frequently praised by left-of-center media outlets and criticized by right-of-center media. Time put Ocasio-Cortez on its “Time 100” list of the 100 most influential individuals of the year. Netflix released the documentary Knock Down the House about the campaigns and elections of four freshman Congresswomen, including Ocasio-Cortez. Politico has called Ocasio-Cortez “perhaps the most prominent liberal in the House.” [19]

Shortly after taking office, Representatives Ocasio-Cortez, Ilhan Omar (D-MN), Ayanna Pressley (D-MA), and Rashida Tlaib (D-MI), formed an unofficial voting coalition called “The Squad.” The Squad came to national attention when President Trump Tweeted that its members should “go back and help fix the totally broken and crime infested places from which they came.” Many pundits considered the Tweet to be racist since all four members of The Squad are non-white. Observers have identified The Squad’s publicity and attention from the national media as further evidence of the Democratic Party’s leftward drift. [20]

In February 2019, Ocasio-Cortez introduced her first piece of legislation, a bundle of resolutions and bills known as the Green New Deal. The Green New Deal is a proposal to phase out fossil fuel and to radically reorganize the American economy around environmentalist goals, particularly combatting climate change. Budget estimates put the ten-year cost of the legislation at up to $90 trillion. [21]

In early 2019, Amazon proposed building its second headquarters in New York City with the assistance of $3 billion in tax credits. Though the headquarters would bring an estimated 25,000 jobs to the city and polls showed that most New Yorkers approved of HQ2, Ocasio-Cortez was an outspoken opponent of the plan. She argued that the New York City government should invest $3 billion in direct economic subsidies and development rather than approve Amazon’s HQ2. Amazon has since stopped the New York plan and is building its new facility in Arlington, Virginia. [22]

In April 2020, Politico reported that the US Chamber of Commerce, which typically supports Republican candidates, is financing the Democratic primary campaign of former CNBC anchor Michelle Caruso-Cabrera against Ocasio-Cortez. [23] Caruso-Cabrera hoped to capitalize on Ocasio-Cortez’s declining popularity, which has been falling since her election. As of July 2019, Ocasio-Cortez has a net favorability rating of -17 among registered voters, though she has a +37 rating among Democrats. [24] As of April 2020, Ocasio-Cortez has raised $5 million in campaign funds. [25]

Ocasio-Cortez is a self-described democratic socialist. She has stated in interviews that she supports the implementation of government-run healthcare, higher taxes, and more wealth redistribution, on the model of the Scandinavian countries. She also supports cancelling all student debt, abolishing ICE, and a federal “job guarantee.” [27][28]

Ocasio-Cortez is a member of Democratic Socialists of America, a far-left organization which advocates for ending private property, the abolition of capitalism, and the conversion of all corporations to worker-owned co-ops. [29]