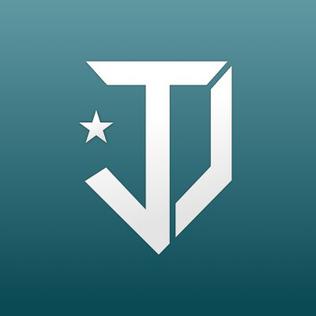 The logo for the Justice Democrats (link)

The PAC was founded by staffers from the Bernie Sanders 2016 presidential campaign and other left-wing activists. [5] It is very critical of conventionally liberal Democratic politicians, such as former President Bill Clinton, and hopes to drive the Democratic Party toward a more left-wing policy agenda. [6] Candidates endorsed and supported by Justice Democrats are expected to pledge not to accept corporate funding and to generally endorse the left-wing platform of Justice Democrats. [7] It was one of the two organizations that created the Green New Deal,[8] and also supports universal government-run healthcare, a prohibition on private donations to politicians, and federal funding for abortions and political campaigns. [9]

Multiple media accounts in 2019 alleged collaboration between Justice Democrats and the 2018 Congressional campaign of Ocasio-Cortez. Among the findings was that Ocasio-Cortez and campaign aide Saikat Chakrabarti were in control of the board of Justice Democrats at the same time they were running her candidate campaign. Of the $2.5 million spent by Justice Democrats during the 2018 election cycle, the largest single recipient was a political consulting firm owned by Chakrabarti that had been paid $605,849. It is unclear what the firm did with this money, and how much (if any) of the spending was used to promote Ocasio-Cortez’s campaign. Supposedly independent political action committees and the federal candidate campaigns they promote are severely limited by law regarding how much they may coordinate their work and finances. Campaign finance experts have stated there is reason to investigate whether this arrangement violated campaign finance laws. [10] [11] [12]

The creation of Justice Democrats was announced in January 2017 by founding members Cenk Uygur (the host and founder of the Young Turks Network), Secular Talk radio host Kyle Kulinski, and former Bernie Sanders 2016 presidential campaign aides Saikat Chakrabarti, Corbin Trent, and Zack Exley. It was an expansion of a similar team that had already formed the Brand New Congress PAC (Exley, Chakrabarti, and Sanders campaign staffer Alexandra Rojas). Justice Democrats was created to work in concert with Brand New Congress PAC (which is not to be confused with Brand New Congress LLC, a separate entity). [13] [14] [15]

Justice Democrats was created to be a crowdfunded PAC with many small contributors creating a pool of money that could be used to support far-left “progressive” candidates in Democratic Congressional primaries. Candidates accepting support from Justice Democrats must pledge not to accept corporate or political action committee donations. Candidates must also “generally agree” with the Justice Democrats policy platform, which includes support for the Green New Deal, Medicare for All, and other proposals aligned to the left of the mainstream Democratic Party. [16]

The often-stated goal of Justice Democrats is to drive the Democratic Party further left and prevent the success of conventionally liberal Democratic candidates and policies. In April 2018, the PAC released a policy report that strongly criticized the policies enacted by President Bill Clinton, and argued the Democratic Party “cannot move to the center; the base won’t allow it.” In place of capturing more support from centrist voters, the report advocated greater outreach to young voters and non-voters, providing survey results showing Democratic Party voters younger than age 45 had a more favorable view of Black Lives Matter than Hillary Clinton. [17]

During the 2020 election, Justice Democrats had a mixed record. The group helped elect Democratic Reps. Marie Newman of Illinois, Cori Bush of Missouri, and Jamaal Bowman of New York, all of whom defeated incumbent Democrats in primary contests. [22] The group initially endorsed Independent Vermont Sen. Bernie Sanders in the 2020 presidential primary, but supported Joe Biden’s successful campaign in the general election. [23]

Justice Democrats endorses a number of far-left policy positions, saying if “Democrats refuse to embrace this platform, they’ll continue to lose, either to Republicans or to us.” [24]
Some examples include: [25]

Shortly after the 2018 midterms, Justice Democrats and Sunrise Movement helped organize a 150 person sit-in inside Speaker Nancy Pelosi’s office in support of the Green New Deal. [26] The U.S. Capitol Police arrested 51 protesters for “unlawfully demonstrating in the Cannon House Office Building” and charges including crowding, obstructing, and incommoding. [27]

According to The New Yorker, the Green New Deal was crafted over a weekend in December of 2018 between far-left groups Justice Democrats, Sunrise Movement, and New Consensus. [28] The Green New Deal is a radical environmental regulatory agenda which—according to an “FAQ” released by Rep. Ocasio-Cortez’s (D-NY) office— demands the elimination of animal agriculture, replacing commercial aviation with “high-speed rail,” and providing “economic security for all who are . . . unwilling to work.” [29]

In March 2019 the Daily Caller News Foundation (DCNF) revealed evidence that during the 2018 Congressional campaign of Alexandria Ocasio-Cortez, both the candidate and senior campaign advisor Saikat Chakrabarti had majority control of the board of Justice Democrats. Because Justice Democrats used its funds to promote Ocasio-Cortez, the candidate and a campaign associate (Chakrabarti) having control over both her campaign and a PAC promoting the same outcome raised the possibility of a coordinated effort, and what some experts in federal campaign finance law believed could be serious violations. [30]

Of the $2.5 million spent by Justice Democrats during the 2018 election cycle, the largest single recipient was Brand New Congress LLC, a political consulting firm owned by Chakrabarti that had been paid $605,849. According to a March 2019 Washington Post report Chakrabarti’s firm was not required by law to disclose what had been done for those payments nor which federal candidates (if any) had been assisted and with how much of the money. [33] [34]

But, asserting that federal campaign laws require reporting the purpose of all expenditures in excess of $200 that are spent for the benefit of a federal campaign, the National Legal and Policy Center alleged the Brand New Congress LLC spending was a violation of the law and filed a complaint with the Federal Election Commission (FEC) on March 4. [35]

More than $1.6 million of the 2018 spending reported to the FEC by Justice Democrats was credited to either staff salaries, fundraising or administration. This means that of the $929,000 in remaining spending, 65 percent was paid to Chakrabarti’s firm. Less than $35,000 of the $2.5 million was given directly to candidate campaigns. [36]

A Republican election law lawyer quoted by DCNF stated: “It looks like the campaign and PAC are under common control and the PAC was funding campaign staff and activities as an alter-ego of the campaign committee, which would be a blatant abuse of the PAC rules.” Two former members the FEC agreed the appearance of an affiliation between Justice Democrats and the Ocasio-Cortez campaign raised serious legal concerns. [37]

According to Adav Noti, senior director of the left-of-center Campaign Legal Center and former FEC lawyer, funneling money through a PAC and then into a private LLC is much more complex than a campaign working with a campaign consulting firm, which could mean that Justice Democrats is either “really just paying themselves and they’re concealing it by using the LLC,” or that “money is going to the LLC and then being disbursed in some other way that they want to conceal.” [38]

In a similar development, the Washington Free Beacon reported in March 2019 that Corbin Trent, who would later become the communications director on the Ocasio-Cortez Congressional staff, had been receiving a $73,000 salary from Justice Democrats during the 2018 election cycle while also acting as the spokesperson for the Ocasio-Cortez candidate campaign. [39]

In December 2017, Chakrabarti and Rojas announced Uygur had been asked to resign from the board of Justice Democrats due to allegedly “racist and sexist” statements made by Uygur in a blog post more than a decade earlier. Shortly thereafter, displeased with how Uygur had been treated, Kulinski resigned from his position as Justice Democrats’ treasurer. [40]