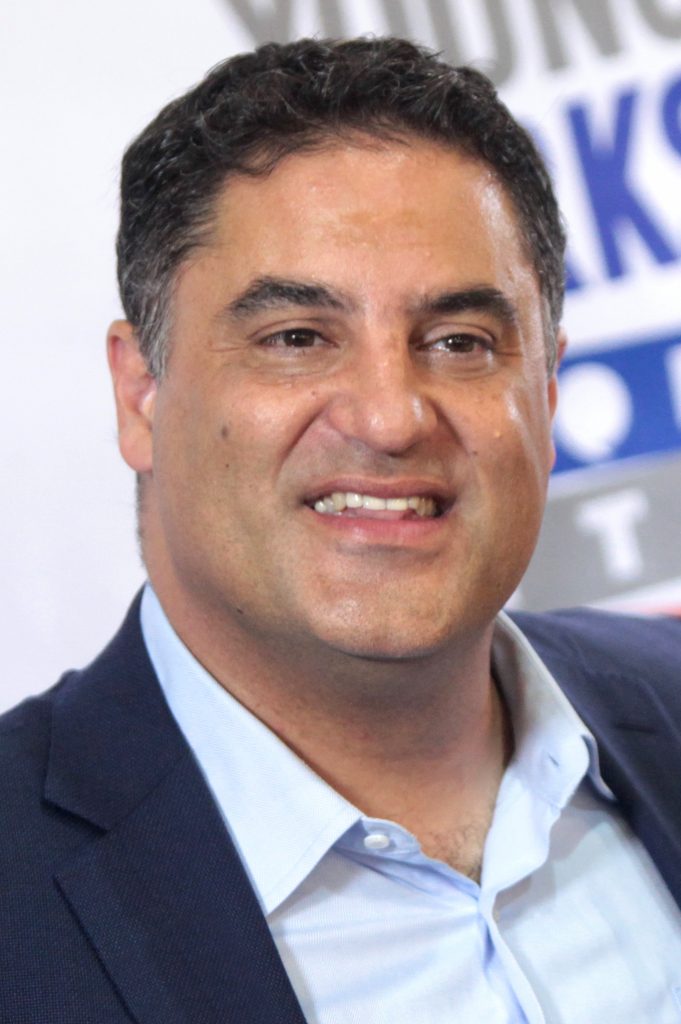 Cenk Uygur is a Turkish-American media entrepreneur and political commentator. He is best known for founding the left-of-center media network The Young Turks (TYT), which describes itself as “the largest online news show in the world.” Uygur has also worked for a variety of other left-of-center media outlets, including MSNBC and Current TV, a network founded by Democratic Party presidential candidate and former Vice President Al Gore. He has also appeared on CNN, ABC, National Public Radio (NPR), Fox News, Al Jazeera, and Voice of America as a political commentator. [1]

In January 2017, just a few days after the inauguration of former President Donald Trump, Uygur helped launch a political action committee called Justice Democrats. He described the organization as “a new wing” of the Democratic Party that would challenge the party establishment, which he said had been co-opted by “multinational corporations” in a “hostile takeover.” Uygur claimed that Justice Democrats would only back Democratic candidates whose campaigns refused to accept “corporate or big donor money” and would only be “funded by the people.” [2] In December of the same year, the organization severed ties with Uygur and co-founder David Koller after a number of their old blog posts containing degrading comments about women surfaced. [3]

Uygur has been criticized throughout his career for repeatedly denying the campaign of massacres and deportations which the Ottoman Empire and the Republic of Turkey perpetrated against their Armenian, Greek, Assyrian, and other Christian subjects during and after World War I. Commonly known as the Armenian genocide, the campaign was instigated by the late Ottoman government led by the Young Turks, a secular nationalist movement which had taken control of the empire, ostensibly to implement reforms. Uygur’s media network is named after this movement. [4]

Cenk Uygur was born in Istanbul, Turkey. His family emigrated to the United States when he was eight years old. He attended the University of Pennsylvania and the Columbia University Law School. He started out as an attorney at law firms in New York City and Washington, D.C. but later decided to go into the news business. [5]

Uygur started his media career as a host, commentator, and writer for various radio stations including WWRC in Washington, D.C.; WRKO in Boston, Massachusetts; and WAMI in Miami, Florida. In 2002, he got a job with Sirius Satellite Radio and started a show called “The Young Turks,” which he claims was “the first liberal talk show to air nationwide.” [6]

Uygur started a YouTube channel for The Young Turks in 2005. [7] That year, TYT attracted nationwide attention when it ran a nearly 100-hour-long program that it called a “live, on air filibuster” covering the U.S. Senate hearing on then-Judge Samuel Alito following his nomination to the U.S. Supreme Court. In 2006, Uygur turned down a radio-only deal and established TYT as a daily online talk show. Within a month, the channel attracted 30,000 viewers, and by early 2010, it had reached 200 million views and was averaging 13 million viewers a month. [8]

Despite TYT’s move online, Uygur retained a presence in conventional media. His internet show continued to broadcast on Sirius Satellite Radio, and he briefly hosted a news program on MSNBC. In July 2011, he left the channel after a conflict with MSNBC president Phil Griffin, who allegedly told Uygur that his combative tone and tendency to critique establishment Democrats as well as Republicans was not acceptable. Uygur devoted an episode of his online show to criticizing MSNBC management after resigning. [9]

From 2011 to 2013, Uygur hosted a televised version of TYT on Current TV, a channel launched by former Vice President and environmentalist activist Al Gore. According to Uygur, his show was the channel’s most popular program. Current TV was only on air for two years. [10] In 2013, the channel encountered financial difficulties and was sold to the Qatar-based media company Al Jazeera, which primarily caters to the Arab world but broadcasts globally. [11]

Al Jazeera management determined that Uygur’s aggressive and opinionated rhetoric would not be a good fit for the company’s stated objective of covering the news from a neutral perspective. Uygur said he was “relieved” that he would no longer need to host a television program, saying that he was “exhausted from doing the two shows at once.” Uygur announced after his show was cancelled that he would be focusing on his website and YouTube channel. According to Uygur, “the future” of media would be “overwhelmingly online.” [12]

In 2017, Uygur helped found Justice Democrats, a political action committee that would support further-left candidates challenging incumbent Democratic members of Congress who it considered overly loyal to establishment interests or insufficiently supportive of left-wing causes. Later that year, the entertainment news outlet The Wrap reported on a series of blog posts that Uygur had written in the early 2000s. The posts contained crude sexual comments about women. In one case, Uygur complained about the lack of attention he received from women, saying that “obviously, the genes of women are flawed” because “they are poorly designed creatures who do not want to have sex nearly as often as needed for the human race to get along peacefully.” In another case, Uygur talked about a Mardi Gras celebration in New Orleans, Louisiana, where he claimed to have “kissed over 23 different women” and “felt countless breasts.” [13]

In 2020, Uygur ran for Congress in California in a bid to replace U.S. Representative Katie Hill (D-CA), who resigned amid controversy over her personal conduct. He received support from U.S. Representative Ro Khanna (D-CA), then-Democratic presidential candidate Andrew Yang, and actor John Cusack. Far-left U.S. Senator Bernie Sanders (I-VT) initially supported Uygur as well but withdrew his endorsement after receiving criticism from his supporters. Uygur was eliminated in the all-party primary election in March 2020 with approximately 5% of the vote. [14]

Throughout his career, Cenk Uygur has repeatedly denied or minimized the significance of the Armenian Genocide perpetrated by Turkey in the early 20th Century. As a student at the University of Pennsylvania, he wrote an article where he claimed that “the allegations of an Armenian Genocide are unfounded.” He also criticized the Armenian Club at the university for allegedly “defaming the Turkish people” by bringing attention to the genocide. In 1999, Uygur wrote a letter to the magazine Salon in which he claimed that “every non-Armenian scholar in the field” considered the facts of the genocide “an open question.” (In 2016, he rescinded both the article and the letter, but cited a lack of expertise, not a change in opinion, as his reason for doing so.) Since then, he has repeatedly dodged questions and avoided making statements on the topic. He has also voiced support for the Turkish Coalition of America, which denies the genocide. [15]

The name of Uygur’s media company, “The Young Turks,” refers to a revolutionary movement in Turkey which sought to replace the theocratic imperialism of the Ottoman Empire with secular nationalism. The term is also sometimes used to describe any group of young political activists or reformers. However, the original Young Turks also organized the massacres and deportations that resulted in the deaths of approximately 1.5 million Armenians, as well as Greeks, Assyrians, Chaldeans, and other Christian ethnic groups living on the territory of the Ottoman Empire. Uygur insists that the name is not intended as a comment on the Armenian genocide. [16]