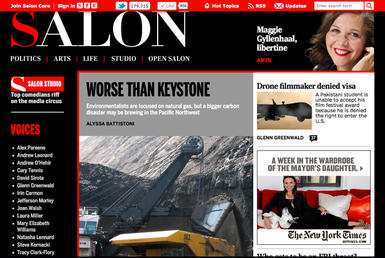 A screenshot of the online progressive magazine Salon. (link)

Salon came to prominence in the late 1990s publishing articles in defense of then-President Bill Clinton and attacking Republicans during Clinton’s impeachment trial.[3] In 1999, the site hosted an Initial Public Offering that brought in $25 million in funding for the company. However, the company made imprudent financial decisions and has been described as a “poster child for the financial weaknesses of Web media” during the dot-com bubble.[4] Salon has never been profitable, has fired hundreds of employees through multiple rounds of corporate layoffs, and has often been on the cusp of bankruptcy.

Salon reportedly relies on two liberal millionaire benefactors, John Warnock and Bill Hambrecht, to keep the site financially afloat.[5] By the end of 2015, the company had an accumulated financial deficit of $124 million, and in May 2016, Salon’s stock was trading at around 10 cents per share.[6]

In 1994, David Talbot, then the Arts and Ideas editor at the San Francisco Examiner, dreamed up a web-publication that would function as a liberal online magazine. That idea became Salon.com.[11]

On Nov. 20, 1995, the first issue of Salon, named by Talbot’s wife Camille Peri, went live under its original web address salon1999.com.[14] Salon built its reputation as a liberal publication defending President Clinton during his impeachment hearings in 1998. [15] The publication gained national attention, both positive and negative, for publishing a story alleging that then-Rep. Henry Hyde (R-Illinois), who was leading the effort to impeach Bill Clinton, had carried out a years-long extramarital affair of his own. [16]

Salon’s stock price plummeted with the collapse of the late 1990s “dot-com” technology bubble. In 2000, the Los Angeles Times labeled the company a “poster child for the financial weaknesses of Web media.”[19]

By 2002, the company was delisted from the NASDAQ exchange after its stock price fell below $1 per share, and Salon issued a warning that it “may not be able to continue as a going concern” because its history of losses and slumping revenue. [20]

Salon has run deficits for almost every quarter since it was founded and by the end of 2015, the company had an accumulated deficit of $124 million. [21]

Silicon Valley investors John Warnock and Bill Hambrecht have propped up Salon since its founding providing the company with over $20 million worth of interest-free cash advances. Salon staffers attribute the duo’s financial contributions as a representation of their commitment to Salon’s left-wing mission.[22][23] However, Politico noted that Salon is in a precarious position given that both of its financiers are over 75 and their heirs haven’t indicated if they will be willing to continue covering Salon’s expenses into the future. [24]

According to Salon’s founding executive editor Gary Kamiya, after the company’s 1999 IPO the company spent “vast sums of money” just as “every good dot-com did in those days.” [26]

As a result, the company had to undergo its first-ever round of layoffs only a year after it went public.[27] In 2000 Salon fired about 20% of its staff and the following year fired another 14% of its workers.[28]

Since 2001, Salon has on multiple occasions fired a large number of employees.[29] [30] As of 2016 the company had only two-thirds of the staff that it had employed at its peak.[31] Salon has, however, published a number of articles stridently condemning publicly traded companies for conducting strategic layoffs to ensure their corporation’s profitability and viability.[32] [33]

In the aftermath of the dot-com crash, Salon was constantly trying to devise a business model that would work.[34] The result was a series of expensive and ultimately unsuccessful experiments, which included, among other efforts, a failed attempt to launch an original video unit called Salon Studios, and a failed attempt to create a premium subscription only service.[35]

In 2012 Cindy Jeffers, formerly of the Huffington Post, was named CEO. She adopted a revenue model based almost entirely on display advertising, ending the company’s paid subscription service in the process.[36] Jeffers’ strategy rewarded aggregation and provocation. Both are easy to produce at scale, since they do not require writers to spend time reporting out a story.[37] According to a Politico report, this strategy moved away from Talbot’s previous emphasis on maintaining a valuable brand, and instead focused much more on coming up with goals for traffic, a focus that was sharply criticized by former Salon writers and other journalists.[38]

Politico detailed Salon employees’ criticisms of Jeffers’ editorial direction: “It became harder to find ‘high-quality’ work amid all the clutter. Twelve current and former employees said they were discouraged from doing original journalism out of a concern that time spent reporting could be better spent writing commentary and aggregate stories.” [39]

In another example, Talking Points Memo publisher Josh Marshall tweeted, “It’s really sad. These Salon headlines are like the bastard child of World Net Daily and the LaRouche Times.”[40]

Similarly, Washington Monthly wrote, “in recent years, in education and other areas, [Salon’s] been full of clickbait headlines, sketchy content, and low journalistic standards. There may still be good work being published there, but not much of it.”[41]

Salon has been known for its unapologetically liberal politics since it launched. [42]

Politico called it “a progressive powerhouse,”[43] and Rolling Stone labeled it a “left-coast, interactive version of The New Yorker.”[44] Similarly, Salon’s founding executive editor Gary Kamiya wrote, “it’s no secret that Salon is a left-leaning publication” and “that after ten years, the idea that Salon would describe itself as “militantly centrist,” is laughable.”[45]

Salon has historically been a reliable supporter of Democrats. The publication generally looks to oppose center-left candidates and favor of staunch liberals; for example, the site backed Howard Dean’s 2004 Presidential primary campaign over John Kerry. In the end however, Salon typically ends up circling the wagons in support of the Democrats.[46]

During the 2016 Democratic primaries, Salon developed a reputation for being not just sympathetic to Bernie Sanders, but overtly hostile to Hillary Clinton. Salon contributor H.A. Goodman wrote several columns for the publication with titles like “I wouldn’t vote for Dick Cheney, so I won’t vote for Hillary Clinton: An unrepentant only-Sanders voter fires back at critics” and “Please, FBI — you’re our last hope: The Democratic Party’s future rests upon your probe of Hillary Clinton’s emails.” [47]

But eventually Salon came to the defense of Clinton once she had assumed her mantle as the Democratic Party’s nominee, publishing numerous articles supporting Clinton and opposing Republican nominee Donald Trump.[48]

Salon’s sensationalist headlines often touch on a wide range of provocative left-wing issues or right-wing criticisms. Some notable headlines proclaimed, “We brought this on ourselves: After Paris, it is time to square our ‘values’ with our history;”[49] “Marco Rubio’s deranged religion, Ted Cruz’s bizarre faith: Our would-be presidents are God-fearing clowns;”[50] and “‘The Legend of Zelda’ Is Classist, Sexist and Racist.”[51]

The publication panned the 2017 Republican-backed tax cuts as “an all-out attack on the future prosperity of America,”[52] and “poisoned.”[53] The site also published an article entitled, “GOP tax bill: A new mechanism for reinforcing white power,” which argued that Republicans love their massively unpopular tax bill because it punishes nonwhites.[54]

On guns, Salon writers have published articles that called for lawsuits against gun manufacturers for the outcomes of violent gun users;[55] proclaimed that mass shootings were the gun industry’s most effective marketing tool,[56] and proclaimed that the nation was founded on gun control.[57]

Fox News has taken issue with Salon’s relentless use of the network’s name as clickbait for their dramatic left-wing headlines while the underlying pieces had little or nothing to do with the network.  Example headlines that didn’t mention Fox News in the article include; “Take a lesson, climate deniers and Fox News know-nothings” and “Bobby Jindal just splintered the GOP: The unholy alliance between Fox News and the 1 percent can no longer stand.” [58]

Similarly, even some longtime Salon fans, such as writer Michelle Dean, lamented the “surge of frothy catnip” brought on by the publication’s push for higher traffic numbers. [62] This style was also said to have alienated Salon staff writers; for instance, Andrew Leonard reportedly quit his job after he was ordered to in his words “go troll Twitter for something to get mad about — Uber, or Mark Zuckerberg, or Tea Party Republicans — and then produce a rant about it.” [63]

Ironically, Salon has published articles bemoaning the rise of clickbait websites and their resulting destruction of journalistic value. Per Salon’s report, “Quantity and speed are vastly superior in importance to quality and factual accuracy.” Moreover, Salon credited the “publish now, check later” style of reporting for the rise of fake news, which it claimed led in part to the election of President Donald Trump.[65]

In 2014, author Dustin Rowles sharply criticized Salon for re-headlining his article and changing his underlying intent, which resulted in the author becoming the target of numerous online criticisms.[66]

In 2016, Salon removed a controversial 2016 article criticizing Otto Warmbier, a  22-year-old American student who died after being imprisoned for 17 months in North Korea, allegedly for attempting to tear down a propaganda sign. Salon’s headline on the subject proclaimed, “This might be America’s biggest idiot frat boy: Meet the UVa student who thought he could pull a prank in North Korea.” This headline was widely panned; for instance, the Washington Post wrote, “the idea that it’s satisfying to see a white man who was a member of a fraternity suffer the consequences of a warped criminal justice system abroad, while people of color struggle against a different system here at home, is more depressing than anything else.”[67]

In 2015, Salon published an article entitled “I’m a pedophile, but not a monster,” by Todd Nickerson, founder of a group calling itself “Virtuous Pedophiles.”[68] In 2017, Salon removed the article and a similarly-themed follow up article,[69] which were decried as “pro-pedophile.” [70] Critics claimed that Salon subsequently removed the articles in order to avoid hypocrisy accusations related to their negative coverage of far-right activist Milo Yiannopoulos’s alleged statements in favor of pedophilia.[71]

In 2015, Salon engaged in standard management union resistance tactics when the Writers Guild attempted to organize its employees despite its editorial history of pro-union advocacy. HuffPost wrote, “Given Salon’s progressive politics, many employees believed the road to collective bargaining for staffers should be a relatively simple one.” Salon management’s delays and attempts to limit the size of the bargaining unit prompted criticisms from the staff, some of whom felt incredibly frustrated and disheartened.[72]