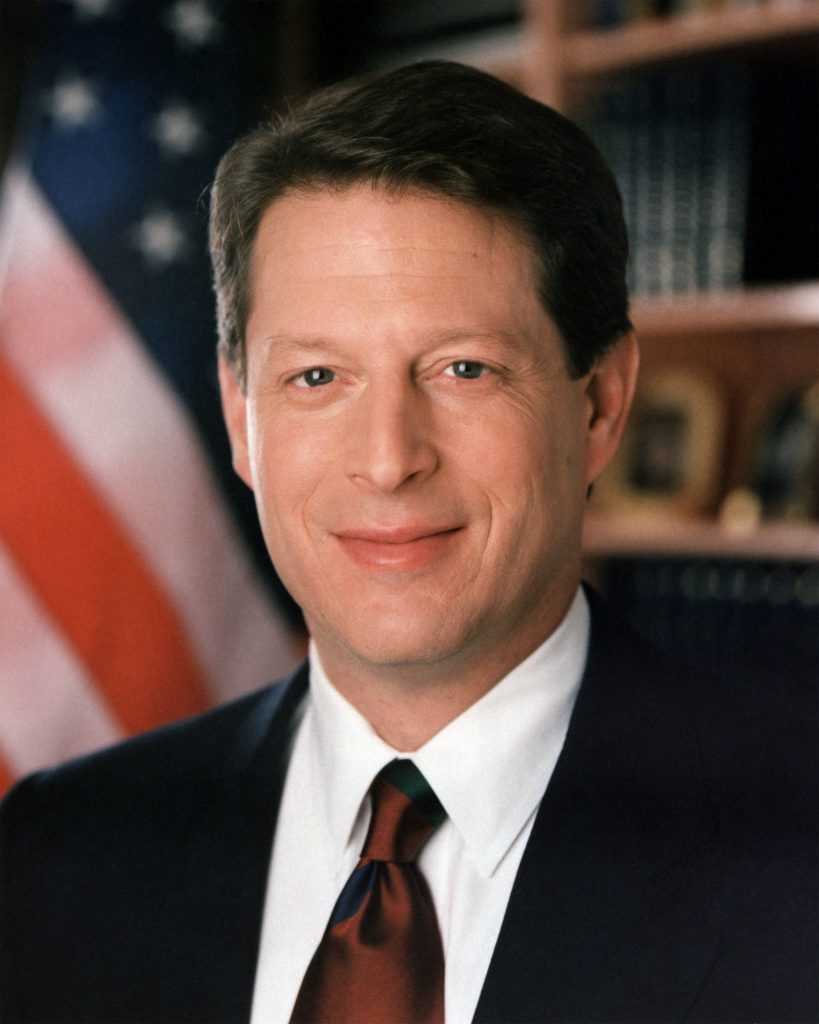 Albert Arnold “Al” Gore Jr. is a Democratic Party politician and environmentalist activist. He has served as a U.S. Representative, United States Senator from Tennessee, and the 45th Vice President of the United States. He was the Democratic Party presidential nominee in the 2000 Presidential election, which he lost to then-Texas Governor George W. Bush. In political retirement he has become an environmentalist documentary film presenter, appearing in the lead role for the controversial documentaries An Inconvenient Truth and An Inconvenient Sequel: Truth to Power.

Al Gore was born in Washington D.C. on March 31, 1948. His father, Albert Gore Sr., was a U.S. Representative at the time and later served in the U.S. Senate for 18 years. His mother, Pauline, was one of the first women to graduate from Vanderbilt University Law School.[1]

Gore spent his childhood going back and forth between Washington D.C. and the family farm in Carthage, Tennessee. He would attend school in Washington D.C., and during the summer months, he would go back to Tennessee. Gore attended St. Albans School, an elite Washington D.C., prep school that often educated the children of the political elite.[2]

After graduating from St. Albans, Gore attended Harvard University in 1965. He initially majored in journalism but he decided instead to major in government after campaigning for and winning freshman class president.[3]

It was at Harvard when Gore became an environmentalist. In his senior year, Gore took a class from noted oceanographer Roger Neville. Neville, Gore would say later, sparked Gore’s interest in the environment and other conservation related issues.[4]

After graduating from Harvard, Gore enlisted in the U.S. Army to improve his father’s reelection prospects.[5] His father’s opponent, Bill Brock, had made the ongoing Vietnam War a major issue. Gore even appeared in campaign commercials for his father’s campaign wearing his army uniform.[6] His father was defeated for reelection to the U.S. Senate in 1970.

Gore was deployed to Vietnam in January 1971. He spent only five months in the country before he was discharged in May 1971. His military record in the country was largely unremarkable and he did not see any major combat. Gore opposed to the war. Gore would later say of his time in Vietnam at the Veterans of Foreign Wars (VFW) national convention in 2000: “I didn’t do the most, or run the gravest danger. But I was proud to wear my country’s uniform.”[7]

Gore went to work at The Tennessean as a night shift reporter.[8] In 1974, Gore took a leave of absence from The Tennessean and entered Vanderbilt University Law School. He did not graduate.

In 1976, Gore launched his political campaign running for his father’s old U.S. House seat. Gore won the Democratic primary and faced no major party opposition in the general election.[9] He was re-elected in 1978, 1980, and 1982. Interestingly, Gore was the first Congressman to appear on C-SPAN in 1979 when his House floor speech was the first one carried on the cable channel.[10]

In 1984, Gore decided to run for the U.S. Senate seat vacated by the then-Senate Majority Leader Howard Baker (R-Tennessee). Gore was unopposed in the Democratic primary and won the general election. This was in spite of Ronald Reagan handily winning Tennessee in the presidential election.

Gore was considered somewhat moderate to conservative in his views. Like many white Southern Democrats, Gore was socially conservative on some issues. For example, he voted to limit federal funding for abortion. He also voted for a nationwide moment of silence to start the school day that many religious conservatives saw as an opportunity to bring prayer into the classroom. Gore even expressed reservations about homosexuality at the time in an interview. In 1984, Gore said, “I do not believe it is simply an acceptable alternative that society should affirm.”[11]

Gore was one of the few Democrats to vote for the Gulf War in 1991. During his career in Congress, he showed interest in environmental issues and technology.[12]

However, he accepted the offer of then-Arkansas Governor Bill Clinton to become his vice presidential nominee in 1992. Many political experts it was a strange pick because both Clinton and Gore were seen as similar in many ways. They were both Southerners, left-of-center moderates, and young. But ultimately they turned out to a popular team, especially when they campaigned with their spouses. Clinton and Gore were elected in November 1992, defeating then President George H.W. Bush.

Once they sworn as president and vice president, Clinton and Gore outlined their relationship. Gore became known as one of the most influential vice presidents in American history. But his biggest rival in the White House was Hillary Clinton. The peak of Hillary’s power was when she chaired the health care task force. During the “Hillarycare” push, Clinton didn’t confide in Gore and for all intents and purposes made Hillary his most important adviser. It even led some Hillary advisers to believe that Hillary, and not Gore, would succeed Clinton as president in 2000.[14]

As a part of the Clinton administration’s efforts to end “the era of big government,” Gore had an interest in shrinking the size of the Federal government. He sought to combat waste, fraud, and abuse in the system. Gore also looked to reduce to cut the size of the bureaucracy and to reduce the number of regulations as well.[15]

Gore continued to have an interest in technology as vice president. The Clinton-Gore administration was the first administration to maintain an official White House website, which went online in 1994. Gore was also involved in numerous initiatives to expand knowledge and use of technology and expand the Internet’s use.

Gore also became well-known for his stance on the environment. He was one of the main negotiators of the Kyoto Accords, an attempt to limit carbon dioxide emissions that was not ratified by the United States Senate.

Gore decided to run for president as soon as 1998. However, Gore had his first stumble in a March 9, 1999 interview with CNN’s Wolf Blitzer. In the interview, he appeared to take credit for the creation of the Internet. “During my service in the United States Congress, I took the initiative in creating the Internet.” said Gore.[16] The comments ignited a firestorm against him. People said that Gore was taking credit for “inventing the internet. Even the left-leaning Snopes internet rumor research group ruled that Gore did not “invent the internet,” though he was responsible for laying the groundwork of some of the infrastructure.[17] Gore never shook the perception that he claimed credit for the internet.

Gore formally announced his candidacy for president on June 16, 1999 in Carthage, Tennessee. He ran on a platform of “strengthening the American family.”[18] “Seven years ago, we needed to put America back to work — and we did,” Gore said at the event. “Now we must build on that foundation. We must make family life work in America.”[19]

Immediately, he began distancing himself from the scandal-ridden presidency of Bill Clinton. While President Clinton had job approval ratings, the American people were said to be sick of constant scandals and investigations that surrounded him and his family. In the campaign, Gore emphasized his personal family values and his ethics. However, when Gore entered the race, he was trailing then Texas Governor and likely Republican presidential nominee George W. Bush in the polls.

Before Gore could face Bush, he had to win the Democratic nomination. Gore defeated former NBA basketball player and former U.S. Senator Bill Bradley of New Jersey. Bradley ran on a “change” message, challenging Gore from the left. Following a crushing defeat in the “Super Tuesday” primaries (held in multiple states on the same day), Bradley quit the race and endorsed Gore.

Texas Governor George W. Bush won the Republican presidential nomination and Gore picked U.S. Senator Joseph Lieberman of Connecticut as his running mate. Gore would ultimately finish slightly ahead in total votes cast, but George W. Bush won the Presidency after securing the decisive electoral votes from Florida. Gore would challenge the result and lost a U.S. Supreme Court case (Bush v. Gore) which stopped a partial recount of some Florida counties as a violation of the Equal Protection Clause.

After his defeat for president in 2000, Gore began to shift to the left politically. In 2002, he opposed the Iraq War. He called the circumstances different between the two Iraq Wars. In 2004, Gore accused then President George W. Bush of betraying the country and “playing on our fears” at a gathering of Tennessee Democrats.[20] He criticized the Bush administration’s use of warrantless wiretapping in 2006. “What we do know about this pervasive wiretapping virtually compels the conclusion that the president of the United States has been breaking the law, repeatedly and insistently.” said Gore.[21] In 2007, Gore wrote a book call The Assault on Reason which attacked the Bush administration and conservatives as “enemies of justice and truth.”[22]

Gore founded Current TV in 2005 when he purchased Newsworld International and rebranded it. At first, the network started as a user-generated content channel but it later shifted focus and became an independent network that promoted progressive politics. The network was not a financial success under either format and it was sold to Qatar-based Al Jazeera Media Network in 2013, which scrapped the brand and reformatted it to become Al Jazeera America. Al Jazeera America itself closed its doors in 2016.

In today’s political climate, Gore is probably best known for his environmental activism. He always showed interest in the issue when he was in Congress. In 1976 as a freshman Congressman, he held hearings on toxic waste and climate change. Even back then, some scientists were warning of temperature increase due to higher carbon dioxide levels.[23]

In 1990, Gore presided over a conference of lawmakers from all over the world. They proposed a “Global Marshall Plan” that would help developing countries develop while protecting the environment. It called for richer countries to transfer wealth and subsidize poorer countries.[24] Those principles would later form the basis of the Kyoto Protocol, which called for greenhouse gas reductions. It would be rejected by the United States Senate by a vote of 95-0.

In 2006, Gore released his move An Inconvenient Truth. The movie was intended to be a warning about the consequences of not addressing climate change. Among the calamities predicted were higher sea levels, more storms, and the extension of the polar bears within a decade. Many of Gore’s predictions did not come true.[25] That did not stop Gore from releasing a sequel in 2017 called An Inconvenient Sequel: Truth To Power.

Gore won the Nobel Peace Prize in 2007 for his work on climate change. He shared the prize with the Intergovernmental Panel on Climate Change. He has also won both a Grammy and an Academy Award related to his movie An Inconvenient Truth.

Gore’s environmental advocacy has been very profitable for him. In 2004, Gore launched Generation Investment Management which invests in companies that have a focus on sustainability. Many of these companies would benefit from the pro “green energy” policies that Gore advocates. Gore also serves on the board of companies such as Apple and Google, which have invested in green energy in recent years.

Ironically, Gore has also been criticized for not living a lifestyle one would expect from an environmentalist, particularly his use of private jets and the high energy bills at his houses.[26] Until Gore became a vegan in 2013, he was attacked by PETA for not advocating against the consumption of meat.[27]

Gore currently serves as the head of the Climate Reality Project, which was once called the Alliance for Climate Protection. The original organization was founded in 2006 and rebranded in 2011. It counters what it calls “global warming denial” and provides “climate change education.”