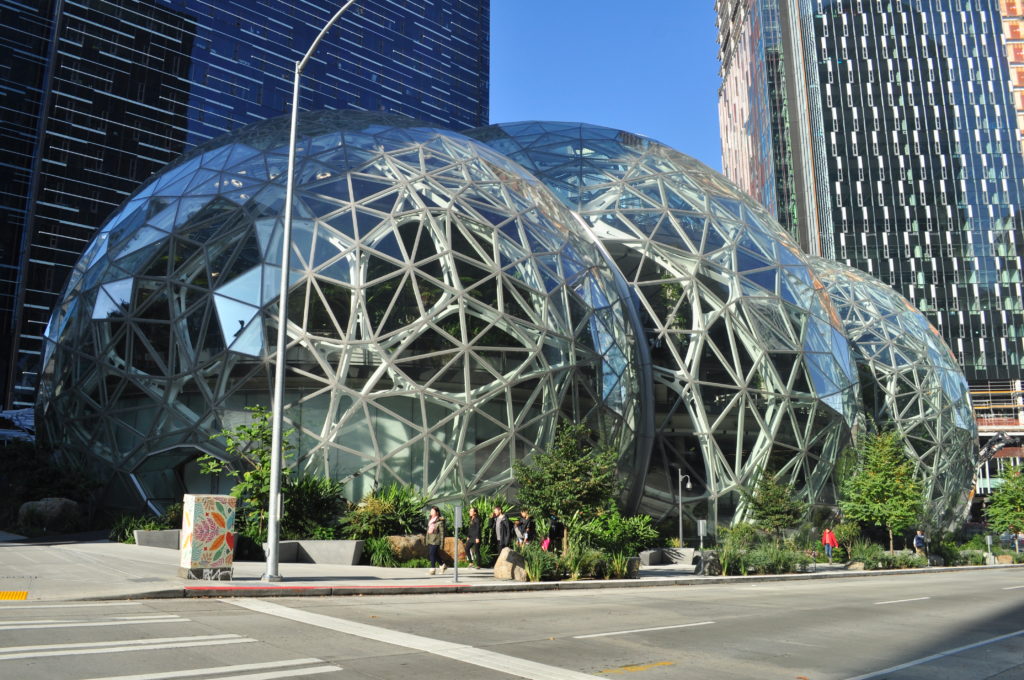 Amazon is an American online retail company based in Seattle, Washington. As of April 2021, Amazon was the third-largest company in the world, with a market cap of $1.7 trillion. [1]

Amazon was founded in 1994 by Jeff Bezos, originally designed to be an online book retailer. The company grew rapidly, went public in 1997, and expanded its retail services throughout the 2000s. By pursuing a high-growth, low-profit strategy, Amazon acquired a massive share of the consumer retail market.

As Amazon has grown, it has attracted criticism from left-wing sources for allegedly embodying the worst aspects of corporate America, including allegedly paying low wages, maintaining poor working conditions, suppressing unionization, and avoiding taxes. Amazon has denied wrongdoing in most cases, though it has become an advocate for a higher federal minimum wage after raising its own American minimum wage to $15 per hour in 2018. Right-of-center sources have criticized Amazon for censoring right-of-center advocacy materials by ceasing to distribute them. [2]

Amazon was founded in 1994 by Wall Street hedge-fund executive Jeff Bezos as an early web-based retailer. Bezos envisioned the company monopolizing digital retail for books and eventually becoming the largest bookseller in the world. In July 1995, Amazon.com launched. [3]

Amazon rapidly found success and quickly began selling merchandise in all 50 states. By 1996, the company reported $16 million in annual sales. In May 1997, Barnes and Noble sued Amazon over its advertising claim that it was the “largest bookstore in the world,” with Barnes and Noble claiming that Amazon was actually a “book broker.” In 1997, Amazon launched its initial public offering. In 1998, the company began selling consumer electronics. That same year, Amazon sales reached $600 million. [4][5]

Amazon sustained heavy losses in 2001, but it was one of the few major online retailers to survive. Throughout the 2000s, Amazon created numerous subsidiaries and expanded its retail services into server space, Kindle reading devices, and ordinary consumer goods. [6]

In the 2010s, Amazon continued to expand into one of the world’s largest companies. Amazon Web Services, first created in the early 2000s, became the largest provider of cloud-computing services in the world. In 2014, Amazon launched the Fire Phone and acquired Twitch, the online gaming streaming platform. In 2017, Amazon acquired supermarket chain Whole Foods Market for $13.4 billion. By 2018, Amazon controlled 5% of American retail spending and a 43% share of total American online spending. [7][8]

Amazon has a famously low profit margin, which it has maintained to reinvest in its operations. The company first turned a profit in the fourth quarter of 2001, earning $5 million on $1.1 billion in revenue. Despite revenue increasing to $60 billion per quarter by 2017, Amazon’s profit margin has always remained close to 0%. In 2018, Amazon’s quarterly profits rose into the low billions. [9][10]

In 2020, the largest recipient of Amazon-associated funds was then-Democratic presidential candidate Joe Biden, who received $2.3 million, followed by the Democratic National Committee (DNC) Services Corp and the presidential campaign of U.S. Senator Bernie Sanders (D-VT), both of which received under $1 million. The fourth and fifth largest recipients were U.S. Senators Jon Ossoff (D-GA) and Raphael Warnock (D-GA), who both received around $300,000. Among the other Democratic presidential candidates, U.S. Senator Elizabeth Warren (D-MA) received $264,000, entrepreneur Andrew Yang received $184,000, and Pete Buttigieg received $183,000. Former President Donald Trump received $287,000, the most of any Republican candidate or organization. [14]

In September 2019, a group of 1,800 employees within Amazon called the Employees for Amazon Justice staged a walkout in protest against Amazon’s environmental impact as part of the Global Climate Strike. Earlier that week, Jeff Bezos had announced that Amazon aimed to be carbon-neutral by 2040, and carbon-neutral on 50% of shipments by 2030. [16]

In September 2019, Bezos signed the Paris Accords Climate Pledge and stated that Amazon would meet the agreement’s goals ten years ahead of schedule. Bezos also offered $10 billion of his own wealth to left-of-center environmentalist organizations through the Bezos Earth Fund. [17]

Amazon reportedly considered implementing a shipping option for customers which would optimize based on environmental impact rather than speed or price, but Amazon ultimately rejected the idea out of concerns it would reduce orders. [18]

Amazon has been accused of engaging in tax avoidance schemes. From 2010 until 2020, Amazon generated $57 billion in pre-tax earnings and paid an effective tax rate of 4.7%, despite the corporate tax rate being 35% for much of this period. [19] Amazon disputes these numbers, and claims its effective tax rate was 24% from 2010-2018. [20] While running for president in 2020, Sen. Bernie Sanders repeatedly criticized Amazon for not paying enough in taxes and promised to restructure the federal tax system to target companies like Amazon. [21]

According to a 2019 Wall Street Journal report, Amazon’s low effective tax rate is achieved by a combination of maintaining low profit margins; continuing high reinvestment of profits into the company; using tax credits offered by governments aggressively; and locating significant portions of the company in countries with low corporate tax rates, such as Ireland. [22]

Left-of-center and labor-union-aligned activists have criticized Amazon for its labor conditions, particularly in its warehouses. Critics have claimed that Amazon purposefully lowers working conditions to reduce costs and maintain market competitiveness. In 2018, Business Insider and the Guardian both ran undercover investigations of Amazon reported missing wages, long shifts, and truck drivers urinating in plastic bottles due to lack of access to bathrooms. Later in the year, thousands of workers across Europe went on strike against Amazon warehouses, demanding higher pay and better working conditions. [23][24]

Sentiment against Amazon working conditions increased during the COVID-19 pandemic, when Amazon was accused of not properly protecting its employees against the virus. A statement by the British GMB union claimed that Amazon set unrealistic productivity targets, sabotaged labor organization efforts, and spied on its workers with surveillance cameras. [25]

Amazon has consistently opposed the organization of unions within its workforce, with some accusing Amazon of doing so in violation of labor laws. In 2001, Amazon laid off over 700 employees in Seattle. The Washington Alliance of Technological Workers accused Amazon of firing the employees because they were considering unionizing, and therefore of violating labor laws, but the company claimed that the layoffs were unrelated to unionization. [26] In the same year, Amazon hired outside consultants to combat a unionization effort in Buckinghamshire, England led by the Graphical, Paper and Media Union. [27]

In 2018, after its acquisition by Amazon, Whole Foods was discovered to be tracking potential union activity within its stores by evaluating “risk factors.” Risk factors included racial diversity, poverty levels near stores, and calls to the National Labor Relations Board (NLRB). [28]

In April 2021, the NLRB charged Amazon with the wrongful termination of two “activist employees” who were fired for union agitation. [29]

That same month, about 3,000 out of 5,900 employees at an Amazon warehouse in Bessemer, Alabama voted on a highly publicized effort to unionize. National Public Radio (NPR) called the event “the most consequential labor battle in decades.” Among the 3,000 voters, 71% voted against unionization. Union advocates accused Amazon of using intimidation tactics and implicit threats of firing to suppress union sentiment, while Amazon claimed the vote indicated a clear preference against unionization among its employees. [30]

In a public statement, Jeff Bezos acknowledged that Amazon committed to the policy in response to persistent criticisms of the company. Earlier in 2018, Sen. Sanders asked for Amazon workers to Tweet their salaries and struggles to bring attention to minimum wage laws. At the time, the average annual salary for an Amazon warehouse worker was $28,000. [32]

Critics of Amazon, like Business Insider’s Kate Taylor, have argued that Amazon’s support of a higher minimum wage is an attempt to force the government to increase costs for Amazon’s competitors, particularly small businesses and large companies like Walmart which tend to pay lower wages than Amazon. [34]

Right-of-center critics have alleged that Amazon censors right-leaning advocacy materials by denying them access to or support from Amazon’s platforms. The most notable case involved the book When Harry Became Sally: Responding to the Transgender Moment, a book by social-conservative activist Ryan T. Anderson critical of transgender ideology and activism that was removed from Amazon’s bookselling platform in early 2021. [35] The site also ceased streaming a biographical documentary film on conservative Supreme Court Justice Clarence Thomas, at least initially refusing to provide the filmmakers with an explanation. [36]