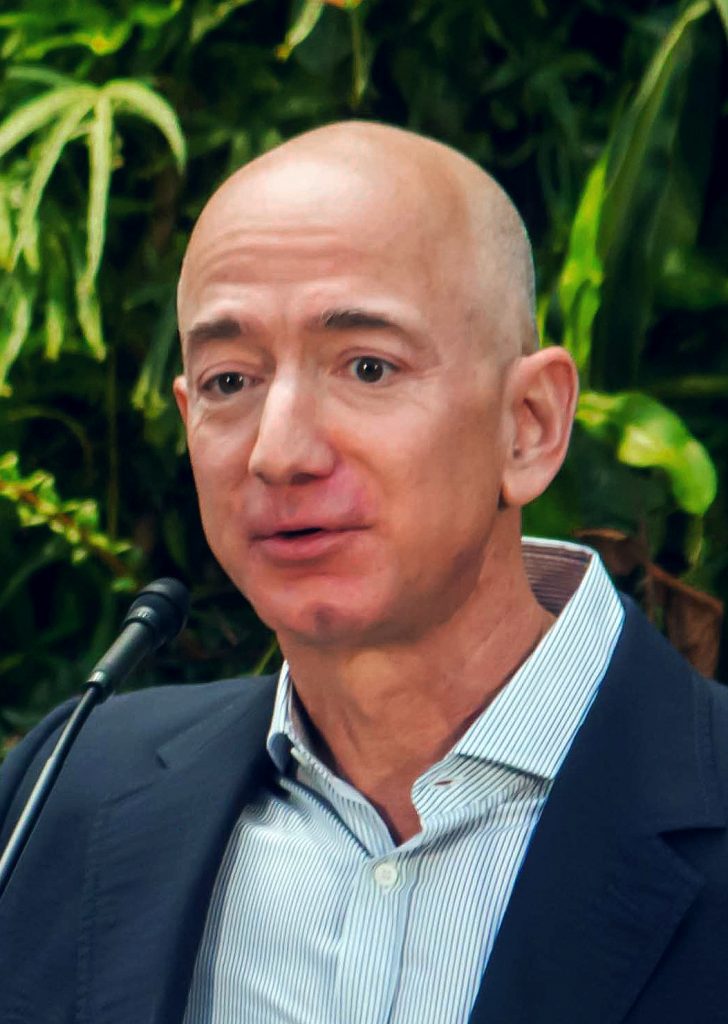 Jeff Bezos is the founder and CEO of Amazon and was estimated by Forbes to be the richest person in the world as of March, 2019, with an estimated net worth of $131 billion. [1] He also owns the Washington Post and the aerospace firm Blue Origin.

He has advocated for left-leaning causes and has consistently been critical of the Trump administration.

Bezos earned a degree in computer science and electrical engineering from Princeton University in 1986 and went on to become the youngest vice president for the D.E. Shaw Group a hedge fund in New York. [4]

In July 2019, Jeff Bezos and his wife MacKenzie Bezos finalized a divorce[8] initiated after media reported that Jeff had engaged in an extramarital affair with entertainment reporter Lauren Sanchez. [9] The two had four children together. [10] Jeff and MacKenzie had met while both worked for the D.E. Shaw Group, a New York hedge fund. [11]

In the couple’s final divorce settlement, Jeff Bezos got all of his ex-wife’s interest in the Washington Post and Blue Origin, and 75 percent of the Amazon stock they owned voting control over. It was the largest divorce settlement in history. [12] The settlement gave MacKenzie a 4 percent stake in Amazon valued at $38 billion at the time of the agreement. [13]

After the divorce was finalized, media outlets reported numerous public sightings of Jeff Bezos and Lauren Sanchez together. [14]

Bezos made a cameo appearance playing an alien in the film Star Trek Beyond. [15]

Bezos left D.E. Shaw in 1994 and moved to Washington State to start Amazon as an Internet bookstore. The company formally launched on July 16, 1995. Initially operating out of his garage, the company’s first annual revenue was $510,000. Amazon went public in 1997. It expanded from books to CDs and video, and eventually to selling almost every retail item. [16]

In late 2018, after considerable criticism from many on the left, including U.S. Sen. Bernie Sanders (I-VT), Amazon raised its companywide minimum wage for workers across the country to $15 per hour. [18]

Bezos founded Blue Origin in 2000 to develop rockets and other technologies for cutting the cost of space travel for paying customers. The company is based in Kent, Washington. He said in 2017 that he would sell $1 billion in Amazon stock to fund the project. In 2019, he announced a Blue Origin moon lander, and also said the suborbital New Shepard rocket could take a tourist in to space for a few minutes. Blue Origin is among 13 companies working with NASA on 19 technology projects to reach the moon and reach Mars. [19]

Bezos paid $250 million for The Washington Post Company in August 2013, gaining a foothold in the nation’s capital with one of the most influential newspapers in the United States. [20]

He teamed with Bill Gates, a fellow Washington billionaire and owner of Microsoft, in 2016 for an environmentalist energy company called Breakthrough Energy Ventures. The $1 billion fund drew several other wealthy investors who made a commitment for the next two decades. [21]

In June 2012, Bezos and then-Secretary of State Hillary Clinton announced the Kindle Mobile Learning Initiative as a public-private initiative to introduce U.S. culture abroad. [22] However, the project was canceled before it started. [23]

In July 2012, Jeff and MacKenzie Bezos donated $2.5 million for the passage of Referendum 74, a ballot initiative to uphold state recognition of same-sex marriage in Washington State. The New York Times reported that the two were among the “largest financial backers of gay marriage rights in the country.” The measure passed in the November election. [24]

During the Obama administration, Bezos backed President Barack Obama’s 2012 executive action on Deferred Action for Childhood Arrivals. He noted $33 million in 2018 to pay for college scholarships for 1,000 children of illegal immigrants. [25]

Jeff Bezos and President Donald Trump have been staunchly critical of each other. During the 2016 campaign, Bezos joked he would like to strap Trump to a rocket and send him to space. After Trump became president, he complained in a tweet that Amazon took advantage of the U.S. Postal Service and reportedly discussed with administration officials the possibility of investigating Amazon for anti-trust laws. [26]

Bezos criticized President Trump for his January 2017 executive order preventing the entry of citizens from seven Middle Eastern countries in an email message to Amazon employees, writing, “Our legal team has prepared a declaration of support for the Washington State Attorney General who will be filing suit against the order. … We’re a nation of immigrants whose diverse backgrounds, ideas, and points of view have helped us build and invent as a nation for over 240 years.” [27]

One year after asking his Twitter followers how to donate his vast wealth, Jeff Bezos and then-wife MacKenzie launched the Bezos Day One Fund in 2018 with $2 billion for “funding existing non-profits that help homeless families, and creating a network of new, non-profit tier-one preschools in low-income communities.” [28] In February 2020, Bezos announced that he is creating an environmental grantmaking fund named Bezos Earth Fund with an initial $10 billion investment. The fund will be making generous contributions to environmental groups, researchers, and non-governmental organizations, and is set to begin making grants in the summer of 2020. [29]