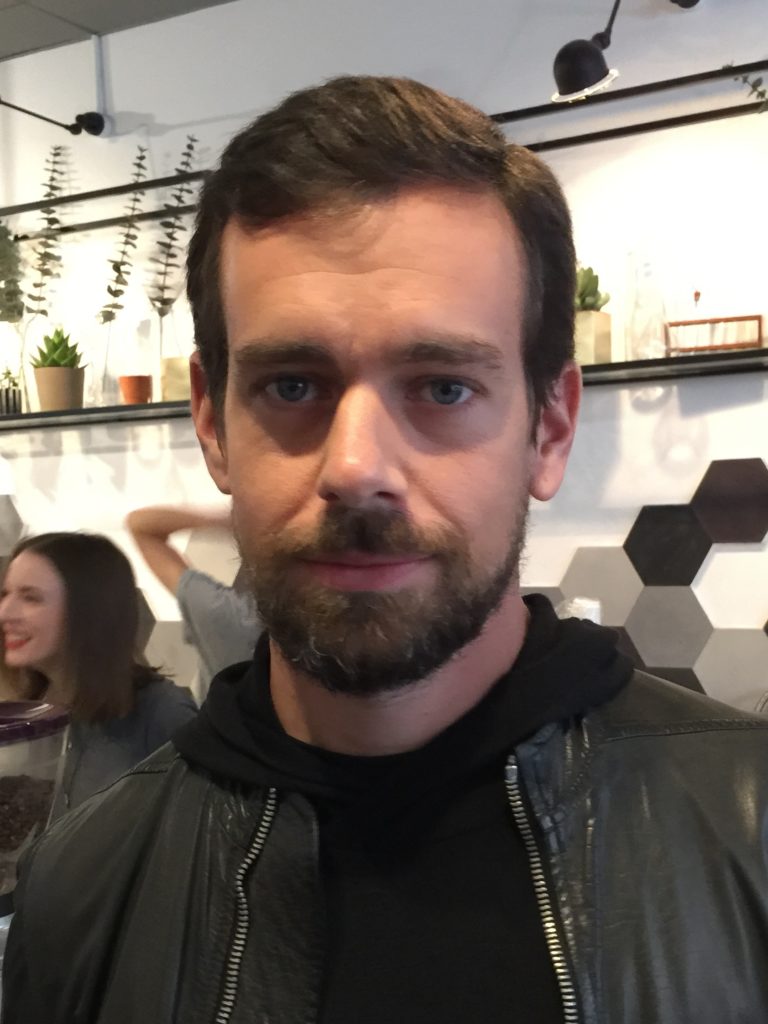 Jack Dorsey, Twitter and Square founder, in a London cafe in November 2014. (link) by cellanr is licensed CC BY-SA 2.0 (link)

Dorsey has said little publicly about his political beliefs, aside from supporting calls for a “universal basic income” welfare program. Dorsey has previously donated to Democratic candidates, particularly in the 2020 election cycle when he donated to presidential candidates Andrew Yang, then-U.S. Representative Tulsi Gabbard (D-HI), and Governor Jay Inslee (D-WA). [1][2]

Dorsey has received criticism from both the political left and right for his content moderation policies at Twitter. Right-of-center sources have accused Dorsey of having bias against conservatives by disproportionately banning and censoring conservative users (most prominently former President Donald Trump), while left-wing sources criticized Dorsey for not banning President Trump from Twitter early in his presidency and permitting the promulgation of conspiracy theories. [3]

Twitter has become an increasingly important outlet for political speech over the decade from 2010-2020, especially with the election of former President Donald Trump, who used Twitter for much of his public communication. In numerous interviews and public statements, Dorsey stressed “transparency” regarding Twitter’s content policies while simultaneously admitting to a “more left-leaning” bias” at the company. [5] Yet as Twitter has attempted to balance free speech with curation, Dorsey has received criticism from across the political spectrum. [6]

Despite being known for taking long absences from work at Twitter, Dorsey has taken an active role in creating the company’s content-curation policy. According to Twitter employees, Dorsey regularly intervenes in individual moderation decisions, usually to lessen punishments on Twitter users who violate company policies. After white supremacist Richard Spencer was kicked off Twitter in November 2016, allegedly for maintaining too many accounts, Dorsey ordered the moderation team to permit Spencer to have a single account once again. Dorsey also initially prevented Twitter employees from banning conspiracist talk show host Alex Jones from Twitter after he was removed from YouTube and most mainstream tech outlets, though Jones was later also banned from Twitter. [7]

Historically, Dorsey has received most of his criticism from right-of-center sources who have claimed that Dorsey and Twitter personnel have a left-leaning bias. In 2018, while Dorsey was testifying before Congress, he was accused of running moderation algorithms which targeted conservative users. Then-United States Attorney General Jeff Sessions held a meeting with state attorneys to investigate the claims. [8] In June 2020, Federal Communications Commission (FCC) Commissioner Brendan Carr (R) accused Twitter of “weaponizing” Twitter for left-of-center political goals by censoring conservatives and promoting left-of-center organizations. [9]

Dorsey has also been criticized by left-of-center sources for not allowing more content restrictions on Twitter, particularly restrictions aimed at President Trump and other right-wing sources. In May 2020, #PleasedeletethoseTweets and #TakeTrumpOffTwitter trended on Twitter after President Trump tweeted in support of the conspiracy theory that television host and former U.S. Representative Joe Scarborough murdered a staffer. [12] Dorsey consistently defended the continued existence of the President Trump’s Twitter account despite calls from the left to ban him from the platform. In November 2020, the Lawyers’ Committee for Civil Rights Under Law and Common Cause issued a joint open letter demanding that Dorsey ban former President Trump’s account for violating the company’s civic integrity policies. Dorsey refused to comply. [13]

On January 6, 2021, Twitter suspended then-President Trump’s account for twelve hours after pro-Trump protestors stormed the Capitol in Washington, D.C.; the account remains suspended as of January 29, 2021. [14]

In February 2020, Elliot Management, founded and run by billionaire Paul Singer, purchased a substantial stake in Twitter with the explicit intention of ousting Dorsey from the CEO position. The move was prompted by Twitter banning political advertising and Dorsey announcing his intention to live and work in Africa for a significant portion of each year, thereby inflaming long-standing criticisms of Dorsey’s leadership. Singer was the seventh-largest political donor in the 2016 election cycle and the second-largest Republican donor behind Las Vegas Sands owner Sheldon Adelson. [15] Singer was an avowed “Never Trumper” during the election but became a supporter of President Trump after the election. [16]

At Elliot Management’s prompting, the Twitter board convened a committee to evaluate the company’s management structure. Ultimately, Dorsey was left at CEO, though the board agreed to a stock buy-back and the appointment of two new board members. [17]

On January 5, 2020, Dorsey wrote an open letter to Congress advocating against a new rule proposed by United States Financial Crimes Enforcement, which would require all private cryptocurrency custodians like Square to report the names and addresses of any user who sends or receives more than $3,000 worth of cryptocurrency. Dorsey argued that the new regulations would be onerous on companies and would encourage cryptocurrency users to hold their assets on private wallets, which are more difficult to monitor. [20]

Dorsey made significant candidate contributions during the 2020 election cycle. He repeatedly gave funds to Democratic presidential candidate Andrew Yang, though Yang ultimately refunded all of Dorsey’s donations. Dorsey also gave $5,600 to Democratic presidential candidate and U.S. Representative Tulsi Gabbard (D-HI), maxing out the contributions to both her primary and (ultimately non-operative) general election bids. Dorsey has stated that he supports Yang’s focus on political solutions to technologically induced unemployment and Rep. Gabbard’s “strong anti-war stance.” Rep. Gabbard later asked Dorsey to host a fundraiser for her campaign, but Dorsey declined. [23][24]

In April 2020, Dorsey announced he was donating $1 billion of shares in Square to Start Small, a nonprofit dedicated to combating the COVID-19 pandemic. Dorsey also stated that after the pandemic ends, he will direct Start Small to advocating for a federal universal basic income in the United States. [28]

In August 2020, Dorsey announced that he was donating $10 million to the Center for Antiracist Research at Boston University. The Center was founded by Ibram X. Kendi, a far-left racial activist author. [29]