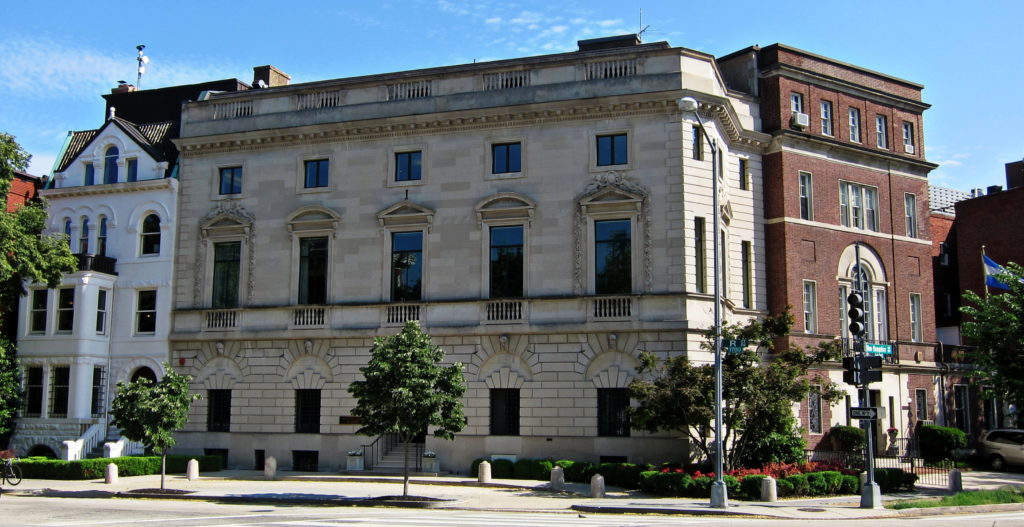 The German Marshall Fund of the United States (GMF) is a nonprofit think-tank founded in 1972 by Willy Brandt, at the time West German Chancellor and leader of the left-progressive Social Democratic Party (SDP). [1] GMF was designed to serve as a think tank and grantmaking organization for American and European policy interests aligned with the Marshall Plan; today, the organization has expanded to include policy research and advocacy related to regions across the globe. [2]

Most of GMF’s activity comes through research reports published by GMF staff and fellows on topics ranging from security policy to environmentalist-aligned energy policy. [3] In recent years, GMF has increasingly focused its attention on European and American relations with Asia, namely on the growing threat of China. [4] Aside from policy research, GMF hosts several high-profile summits throughout the year, bringing together global political and business leaders. [5]

GMF is heavily funded by the American, German, and Swedish governments. [6] Aside from governmental funding, GMF has also accepted donations from several left-of-center grantmaking organizations, including the Democracy Fund, the Charles Stewart Mott Foundation, and the Open Society Foundations. [7] Though most of GMF’s work is nonpartisan, several organization members have taken strong stances against President Donald Trump, accusing him of “imitating” Chinese aggression using “manipulation of information and bullying tactics.” [8]

The German Marshall Fund was founded on June 5, 1972 to commemorate the 25th Anniversary of the Marshall Plan, a Truman administration program to counter Soviet influence in postwar Western Europe with civil and military aid. [9] West German Chancellor Willy Brandt established the fund as a gift to the United States with the goal of promoting relations between the United States, Germany and the European community. [10] Then-President Richard Nixon praised the move, beginning a decades long partnership spearheaded by Harvard academic Guido Goldman, who served as the first president of the German Marshall Fund. [11]

GMF worked on American policy in relation to Europe for most of the remainder of the 20th century, especially in spearheading efforts to rebuild Eastern and Central Europe and promote democracy following the fall of the Berlin Wall. [12] Today, GMF’s policy focus has expanded beyond American-European economic relations, covering all areas of policy in regions across the globe. [13] GMF has also expanded to include eight offices around the United States and Europe. [14]

German Marshall Fund frequently publishes research reports written by GMF staff and fellows. [15] Though the work varies widely in topics from energy policy to migration, most of the published research focuses on the role of Europe and the United States in promoting democratization. [16]

Though GMF was originally founded to support the ideals of the Marshall Plan in Europe, its fellows and officials today work in a range of regions and political fields. [17] GMF continues to focus on relations with Europe, managing a “Europe Project” with the goal of examining policy related to security, democracy, economic relations, and migration across the continent. [18] GMF also has a research project dedicated specifically to improving Eastern Europe and coordinating responses to Russian policy in the post-Cold War era. [19]

In recent years, GMF has increasingly focused on the growing threat of China, launching a specific “Asia Program.” [20] The program aims to unify American and European responses to challenges coming from Asia, while strengthening partnerships with Asian democracies to promote democratic ideals in the region. [21] In addition to conducting research on policy in Asia, GMF hosts three annual summits aimed at creating transatlantic dialogue around China and strengthening the relationship between the United States, Europe, and Japan. [22] GMF officials have often taken strong anti-China stances, decrying Chinese practices including the detention of innocent foreign citizens and the suppression of online content that is unfavorable to the Chinese Communist Party. [23] [24] [25]

In the wake of COVID-19, GMF has run several surveys to study the state of China in the world, reporting that more European citizens in US-allied countries view China as the leading global power after COVID-19 than they did before the pandemic. [26]

Aside from the Brussels Forum, GMF hosts several smaller events throughout the year, including the Atlantic Strategy Group, the Transatlantic Security Task Force, and the Trilateral Strategy Group. [31] GMF has also frequently collaborated with the United States government. [32] Once per year, GMF convenes ambassadors from NATO member countries for a strategy-planning session on the future of NATO policy. [33]

German Marshall Fund reported $24,328,045 in grants in 2017, $7,910,374 of which came from government grants. [35] [36] These included grants of over $1 million from the American State Department, the United States Agency for International Development (USAID), the German government, and the Swedish Ministry for Foreign Affairs. [37] Aside from government funding, GMF has reported grants from some of the largest left-of-center grantmakers in the world, including the Democracy Fund of eBay founder Pierre Omidyar, the Charles Stewart Mott Foundation, and Open Society Foundations of liberal hedge-fund billionaire George Soros. [38]

Though most of GMF’s content is nonpartisan, fellows have taken shots at President Donald Trump and Republican foreign policy, with GMF associates accusing Trump of “beating up on our closest allies in Europe” and allowing China to infiltrate relationships with American allies. [39] Laura Rosenberger and Julie Smith, both GMF program directors, accused Trump of “imitating” Chinese aggression “through their own manipulation of information and bullying tactics.” [40] GMF also published a joint report with Visegrad Insight alleging that “four years of Trump’s administration have coincided with a drop in democratic standards in Central Europe,” calling American relations with the region “devoid of values.” [41]