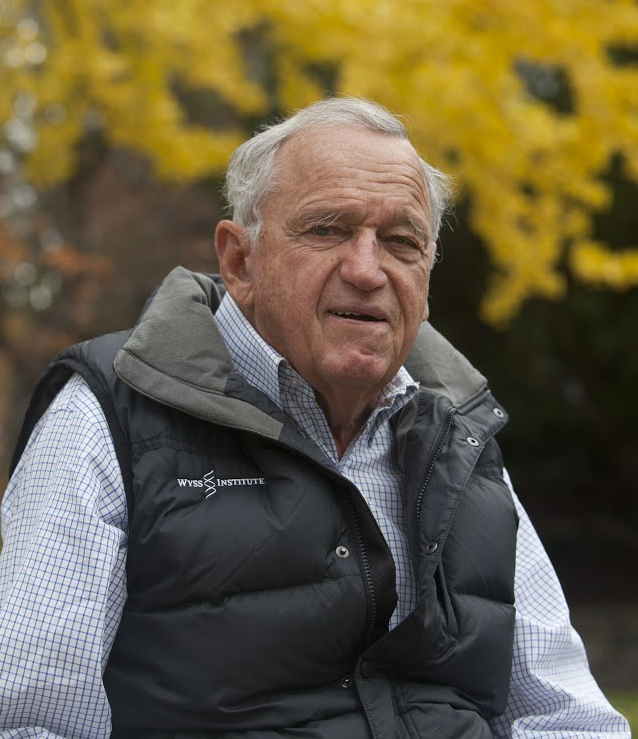 Profile photograph of businessman and philanthropist, Hansjörg Wyss (link) by Oceana is licensed CC BY 3.0 (link)

Hansjorg Wyss (Hansjörg, sometimes spelled Hansjoerg; pronounced “Veese”) is a Swiss entrepreneur and businessman. He is the former CEO of multinational medical device manufacturer Synthes. Wyss’ net worth is estimated to be over $6.1 billion. [1]

Wyss is an active philanthropist, giving through his private foundation, the Wyss Foundation, which supports liberal civic and environmentalist projects. [2] In addition, Wyss is a political supporter of center-left groups and politicians.

Wyss’ support for liberal political groups through his Wyss Foundation and its associated 501(c)(4) lobbying arm, the Berger Action Fund (formerly “Wyss Action Fund”), has earned him criticism from conservative and liberal groups and journalists. The New York Times has criticized Wyss for “quietly” becoming an “influential force among Democrats” through his nonprofits, and a “leading source of difficult-to-trace money to groups associated with Democrats.” As the Times put it: [3]

He is not as well known as wealthy liberal patrons like George Soros or Tom Steyer. His political activism is channeled through a daisy chain of opaque organizations that mask the ultimate recipients of his money. But the Swiss billionaire Hansjörg Wyss has quietly become one of the most important donors to left-leaning advocacy groups and an increasingly influential force among Democrats.

In April 2021, the New York Times criticized Berger Action Fund for donating $10.8 million between 2016 and 2017 to the Sixteen Thirty Fund, a 501(c)(4) funding and fiscal sponsorship nonprofit part of a $731 million “dark money” network managed by Arabella Advisors, a consulting firm in Washington, DC. [4] In May, a follow-up article by the New York Times discovered that the Berger Action Fund had donated $135 million to Sixteen Thirty Fund between 2016 and March 2020. The Times has criticized the Wyss Foundation’s close ties and funding for the Sixteen Thirty Fund, which it called one of the “leading dark money spenders on the Left” responsible for distributing more than $63 million in super PAC donations that hurt Republicans and aided Democrats in the 2020 election, as well for “help[ing] create and fund dozens of groups, including some that worked to block Mr. Trump’s nominees and push progressive appointments by Mr. Biden.” [5]

Wyss dismissed critical reporting on his political activities by the New York Times as “bullshit” in late 2021 and reportedly accused the Times reporter of being a “well-known conservative editor.” [6]

Wyss was born in Bern, Switzerland in 1936.[7] His father was a mechanical calculator salesman and his mother was a homemaker. Wyss grew up in an apartment with two sisters.[8]

At age 22, Wyss first visited the United States in 1958 as an exchange student.[9] After gaining his engineering degree from the Swiss Federal Institute of Technology in Zurich in 1959, Wyss returned to the U.S., enrolling in the MBA program at Harvard University in 1963 and graduating in 1965. After graduation, Wyss served as a plant engineer and project manager for Chrysler in Pakistan, Turkey, and the Philippines.[10] Wyss worked for a number of years for different companies, including Monsanto Europe.[11]

Wyss told a Swiss reporter in 2011 that he is “a non-American,” barring him from directly contributing to political campaigns in the United States (FEC filings reveal he has given to Democrats in past elections). [12]

Wyss was the CEO of Synthes, a multinational medical device manufacturer that specializes in medical implants and biomaterials. Wyss’ first encounter with Synthes was made when he sold an airplane to one of the four Swiss doctors who had founded the company. Wyss would later become the founder and President of Synthes USA in 1974.[13]  During his time as CEO, Wyss played a key role in establishing the company’s presence and manufacturing capabilities in the U.S., but also the firm’s global expansion.[14]

In 2009, Synthes faced 52 felony counts stemming from allegations that it illegally experimented on patients, three of whom died.[15] The alleged conduct occurred from 2001 to 2004, in which patients were injected with the company’s bone-cement product, Norian, despite the U.S. Food and Drug Administration’s refusal to approve the product. Four high-ranking executives pleaded guilty for the company’s crime of running unauthorized trials and promoting the product for unapproved uses, without conceding that they were involved in the crime.[16]

Wyss is an active philanthropist, giving to organizations that address the environment and social issues such as immigration reform, healthcare, economic opportunity, conflict resolution, and health and reproductive rights.[18] In 2013, he took the Giving Pledge, committing to give half of his wealth to charity during his lifetime or in his will.[19]

Wyss has helped found many philanthropic organizations including the Wyss Foundation, which he currently serves as chairman.[20] The Foundation has invested more than $175 million to “help communities, land trusts, and non-profit partners conserve nearly 14 million acres in the West for future generations.”[21] A longtime resident of Wyoming, Wyss donated $4.25 million in 2013 to the Trust for Public Land to purchase oil and gas leases on 58,000 acres of land in Wyoming’s Hoback Basin to protect it from development.[22]

In 2005, the Wyss Foundation donated $5 million to the Clinton Foundation in support of “No Ceilings: The Full Participation Project.”[23]

Wyss also donates to his alma mater, Harvard University, giving a record $125 million gift in 2009 – the largest individual philanthropic gift in the school’s history at the time – to establish the The Wyss Institute for Biologically Inspired Engineering at Harvard University.[24]

On May 15, 2021, the right-leaning watchdog Americans for Public Trust (APT) filed a complaint (archived here) with the Federal Election Commission (FEC), which oversees political groups’ spending, alleging violations of the Federal Election Campaign Act by Hansjorg Wyss, the Wyss Foundation, the Berger Action Fund, the New Venture Fund (in its capacity as the parent of the Hub Project), and Sixteen Thirty Fund. [25] According to APT, “Mr. Wyss indirectly funded federal electoral advocacy through his nonprofit organizations,” failing to set them up as political action committees (PACs), and “the intended recipient of these funds was ultimately a variety of organizations whose primary purpose is to engage in electoral advocacy.”

Organizations which receive contributions in excess of $1,000 or makes contributions in excess of $1,000 in a calendar year is considered a PAC for the major purpose of influencing elections. PACs are subject to strict financial reporting requirements that 501(c)(3) and (c)(4) nonprofits are not. [26] The complaint points out that the Wyss Foundation, Berger Action Fund, and New Venture Fund, which are all 501(c) nonprofits, have failed to file a statement of organization with the FEC, despite Wyss contributing at least $56.5 million from the Wyss Foundation to the New Venture Fund and another $135 from the Berger Action Fund to the Sixteen Thirty Fund. The 501(c)(4) Sixteen Thirty Fund spent $30 million influencing the 2018 midterm elections in order to favor Democratic candidates, “thereby triggering classification as a political committee,” according to APT.

U.S. law strictly prohibits foreign nationals from making direct or indirect contributions to political action committees. [27] Wyss, who was born in Switzerland, resides in the U.S. under an “E-2 VISA” (which is intended for foreign investors who live and work in the country) and “is not a permanent resident of the U.S. under a ‘green card,'” according to his attorney. [28] The complaint cites $41,000 in illegal federal campaign contributions Wyss paid between 1998 and 2003, claiming that, “Since that time, [Wyss] has made indirect contributions and expenditures by means of an intricate network of organizations in a scheme to obscure his role as the source of these funds.” [29]

APT alleges that Wyss established the Hub Project, a front for the “dark money” funder New Venture Fund and the recipient of significant funding from the Wyss Foundation, in order “to avoid any connection with the sizeable election activities carried out by the Hub Project and Change Now,” a super PAC associated with the Hub Project. “Operating since 2015
without the requisite FEC filing,” APT writes, “the Hub Project has been immune to any oversight and accountability despite significant spending in federal election.” It adds:

The Hub Project has served as a vehicle for the political spending of Mr. Wyss. This is demonstrated by the fact that Mr. Wyss has not publicly disclosed his role in founding the Hub Project. Neither his influence nor his financial support can be found anywhere on the group’s website. Rather, information regarding his involvement with the Hub Project was the result of “interviews with five people with knowledge of The Hub Project, an internal memo from another liberal group that was obtained by The New York Times.”

In 2016, the Daily Caller reported that Wyss, a foreign national who does not hold U.S. permanent residency or citizenship, illegally contributed $41,000 to the campaigns of multiple Democratic politicians between 1998 and 2003. [30]

Wyss’ Berger Action Fund has supported the National Redistricting Action Fund (NRAF), the left-wing redistricting group run by former Attorney General Eric Holder. The Berger Action Fund, the advocacy arm of the Wyss Foundation, donated $3 million the NRAF between 2018 and 2020. [33] In 2021, Wyss attempted to purchase the parent company of the Chicago Tribune, with the reported goal of turning the newspaper into a national publication. Wyss and Maryland hotel executive Stewart Bainum Jr.  put together an offer of $680 million, before the former backed out. [34]

The email, sent to Podesta by Matt Hollamby, a program officer at the Wyss Foundation, included a memo which claimed that increased turnout among traditionally Democratic-leaning demographics was vital to the success of the Wyss Foundation’s “issue agenda.” The memo recommended that, from 2016 to 2020, the Foundation should spend $24 million on anti-voter ID litigation and automatic voter registration advocacy, $25 million on “engagement” work among existing voters, and $50 million on a “registration surge” among “progressive” demographics designed to “transform the electorate.” [36]

The email also shows that the idea for the “registration surge” came from “Corridor’s registration model,” referring to a voter registration model developed by Corridor Partners, a left-leaning consulting firm, earlier that year. [37] Emails released by Wikileaks show that Bill Roberts, principal at Corridor Partners, shared the plan with Molly McUsic, the Wyss Foundation’s president, who immediately shared it with Podesta, describing it as the “new c3 version.” [38]

In a 2021 interview with Blick, Wyss appeared to dismiss critical reporting by the New York Times on his political spending as “bullshit” and investigative reporter Kenneth Vogel (who is not a conservative) as “a well-known conservative editor who keeps writing fact-less articles like this.” When asked about his support for Democrats in past elections, he said, “I have not donated a dime to any candidate in the 2020 U.S. election. First of all, I can’t, secondly, I don’t want to.” [39]

However, Wyss has not been accused of illegally donating to Democratic candidates in the 2020 election, but rather past elections in the late 1990s and early 2000s. Federal Elections Commission filings show five-figure contributions from Wyss to numerous Democrats, including Reps. Mark Udall (CO) and Jay Inslee (WA) as well as the Idaho Democratic Party. [40]

In that same interview Wyss also boasted of his “indirect contacts in Washington and in the White House,” referring to the Biden administration. [41]

Wyss is a founding member of the Center for American Progress (CAP), one of the largest and most influential think tanks on the Left. His sister, Hedi Wyss, wrote of CAP in a 2014 biography of her brother that the organization “largely endors[es] the politics of the Democratic Party and . . . tries to propose and implement progressive ideas in American politics.” According to Hedi Wyss, in 2011 her brother met with CAP and the American Civil Liberties Union (ACLU):

. . . and the discussion is centered on the various possibilities for exerting an influence on American jurisdiction, which has been dominated by conservative forces in the past years with alarming consequences for American domestic politics.

All agree that it is important that the public be aware of the crucial role played by the Supreme Court and know more about the political affiliations of its members,” she wrote before adding in the same paragraph that “the assembly agrees on the needs to (re)interpret the American constitution in the light of progressive politics.