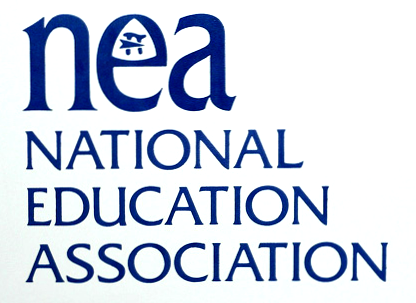 This is a logo for Post-secondary educational organizations. (link)

The NEA is a major political player, with its associated political action committees contributing nearly $143.5 million to federal candidates and committees—97% of which supported Democrats and liberals—from 1990 through February 2019. [4] The NEA is also deeply entangled in state and local politics and is a major contributor to left-of-center nonprofit organizations.[5]

NEA was founded in 1857 as the National Teachers Association (NTA) when 43 educators met in Philadelphia in order to advocate for public education.[6] It changed its name to the National Education Association in 1870.[7] Zalmond Richards—founder of Union Academy in Washington, D.C. and a faculty member at Columbian College, now known as George Washington University—became NEA’s first president.[8] Since then, NEA has grown to represent close to 2.95 million as of 2015, a decline from the union’s peak membership in 2008-2010.[9]

NEA has a long history of issue advocacy, beginning with support for the Morrill Act of 1862, which supported land-grant colleges and the creation of public state universities.[10] In 1867, NEA successfully lobbied Congress to create the first Department of Education,[11] which was almost solely devoted to collecting information to help states create public school systems.[12] In 1866, the NEA opened it’s membership to women.

NEA continued to gain political victories in the 20th century as it began to promote state pension plans in 1923. By 1950, every state had a pension plan.[13] By the mid 20th century, NEA was advocating for more controversial policies, such as advocating for the Bilingual Education Act, providing federal funding for the development and implementation of bilingual education programs, in 1968.[14]

Over the intervening century from founding to 1957, NEA grew from its original 43 to 700,000 members.[15] A mere two years after its Centennial, NEA won one of its largest victories: Wisconsin became the first state to allow collective bargaining for public-sector unions.[16] This controversial practice allows public-employee unions to negotiate with the very people they support for election to office, tilting the balance of power in negotiations greatly in the favor of unions.

More recently, NEA was one of the primary advocates against the appointment of education reformer Betsy DeVos as President Donald Trump’s Secretary of Education, urging senators to vote against the school choice advocate because she was “more than unqualified” and “an actual danger to students,” according to NEA president Lily Eskelen Garcia.[17]

NEA gives generously to Democratic political campaigns as well as various left-of-center organizations. This trend to active engagement in politics increased rapidly after the 1960s as states began requiring school districts to collectively bargain with NEA and other unions. From 1980-1994 alone, NEA increased it’s donations to congressional candidates from $4,000 to $3.7 million.[21]

During the 2016 election cycle, NEA gave over $2.6 million to members running for election in the Democratic and Republican parties, giving over 86% of that amount to Democrats. NEA gave $2.2 million to PACs.[22]  Top recipients of NEA money during the 2016 cycle were:[23]

NEA also sent tens of millions of dollars to political action committees, or PACs, including over $68 million to NEA’s PAC, $4.7 million to the NEA Advocacy Fund, and $2.1 million to the California Teachers Association.[24]

In the 2012 election, NEA gave $61,577 to elect Barack Obama for president over his rival Mitt Romney. NEA also spent $19,000 on House candidate Kathleen Hochul (D-N.Y.), $17,080 on Senate candidate Tammy Baldwin (D-Wisconsin), and $16,000 on House candidate Derek Kilmer (D-Washington), among many others. [25] In recent years, NEA has also thrown its weight for and against multiple state ballot measures, most commonly to support increasing the minimum wage, to reject teacher performance evaluations, or to block repealing taxes. [26]

Through its grant program and in its political contributions, NEA gives money to various left-of-center organizations, including: [27]

NEA has also given to a few right-of-center organizations, including the Republican-aligned Ripon Society [28] and the moderate Republican Main Street Partnership. [29]

At the National Education Association’s 2018 representative assembly, delegates voted to create a fund to support teacher strikes in response to six statewide teacher strikes in West Virginia, Oklahoma, Kentucky, Colorado, Arizona, and North Carolina. This fund was established through individual donations from members of the NEA.[30]

NEA advocates for a wide array of left-of-center positions on education and other political issues.

NEA has been a long time and vocal opponent of school vouchers used to help low-income students afford schools outside of their traditional district school. NEA claims that vouchers “reject students based on economic status, academic achievement, disability, or even gender.”[31] NEA also claims that vouchers “divert essential resources from public schools to private and religious schools, while offering no real ‘choice’ for the overwhelming majority of students.”[32]

NEA has also taken a stand critical of charter schools, saying they have “weak regulation and lax oversight” which should be of “major concern to students, parents, taxpayer, and communities.”[33]

NEA has taken positions on issues both directly and indirectly related to education. It has supported public child nutrition programs,[34] offered qualified support for the Common Core State Standards,[35] and opposes voucher legislation.[36] However, NEA has also taken stances on issue with little to no relation to education. For example, NEA supports a path to citizenship for illegal immigrants,[37] supports  Obamacare,[38] opposed the nomination of Neil Gorsuch to the Supreme Court,[39] and supports barring people on the secret federal “no fly” list from being able to purchase guns with legislation that lacked proper due process protections.[40]

After the terrorist attacks on September 11, 2001, NEA issued guidelines on how teachers should discuss the attacks, urging teachers to show students how America had mistreated other people and nations, stressing the need for children to be tolerant of other cultures, and stating that teachers should not “suggest that any group [was] responsible” for 9/11. Instead, they urged teachers to have students “discuss historical instances of American intolerance.”[41] Public outcry over the guidelines ensued, with Jan La Rue of Concerned Women of America saying, “It’s got their political spin all over it. The sentiment is what is wrong with America.”[42]

NEA also donated heavily to the now-defunct progressive community organizing group Association of Community Organizations for Reform Now (ACORN). From 2006-2008, NEA donated nearly $400,000 to a group that was accused of voter fraud, advising on how to dodge taxes, and more. NEA was later forced to retract support for ACORN, as then-president Dennis Van Roekel stated NEA was “stunned and appalled” by the “inexcusable actions.”[43]

In a May 18 article in the Washington Post, American Political Science Association congressional fellow Chris Baylor stated that teachers unions such as the NEA and the American Federation of Teachers (AFT) “don’t increase teacher salaries. . . . But teachers’ unions do accomplish something politically notable: They are a vital part of liberal coalitions and the Democratic Party.”

Baylor argued that “when public-sector [e.g. teachers] unions lose power, so do liberal and Democratic causes.” Teachers unions have played a dominant role in the Democratic Party and its allies since the 1970s. “From early on,” Baylor said, “the NEA aimed to lead the liberal coalition. . . . [S]ince 1990, the AFT has been one of the top 10 contributors to federal campaigns in five election cycles, and NEA has been one of the top five contributors in seven.” [44]

NEA is predominantly funded by member dues and “agency fees” paid by teachers obligated to be represented by the union in non-right-to-work states. [45] At least in previous years, NEA has received in more in dues than the Service Employees International Union (SEIU).[46]

As of 2016, NEA reported total assets of over $363 million, income of roughly $388 million, and expenditures of $362 million. Nearly $363 million of the NEA’s income come from membership dues; the rest of the union’s income is from loan repayments, interest, dividends, rents, reinvestment, and more.[47]

NEA distributes gifts and grants each year predominantly to its statewide affiliates, such as the California Teachers Association, which has received the largest sum ($10,599,007).[48]

The NEA Foundation is NEA’s affiliated 501(c)(3) charitable arm, which itself offers grants and awards funded from teacher dues, corporate sponsors, foundations, and other donors. The NEA Foundation was founded in 1969[49] and has given “more than $7.1 million to fund nearly 4,500 grants to public school educators.”[50] NEA President Lily Eskelen Garcia also sits on the board of directors of the NEA Foundation along with individuals from organizations as diverse as Howard University to the BET Networks to Amazon.[51]

The President and CEO of the NEA Foundation is Harriet Sanford, who has headed the organization since 2005.  She began her career as a public school teacher, eventually becoming a major fundraiser for nonprofits.[52]

The NEA Foundation also awards grants of up to $5,000 to NEA members  to support professional development and academic achievement.[54] Other state teacher associations received over $2 million from NEA, including  those in Michigan, Ohio, Illinois, Pennsyvlania, Washignton, New Jersey, Texas, Maryland, Massachusetts, and Alabama.[55]

Lily Eskelen Garcia is the president of NEA. A former lunch lady turned elementary school teacher from Utah, she was elected President of the Utah Education Association.[57] In 1998, she ran as a Democrat for Congress, losing with 45% of the vote to incumbent Rep. Merrill Cook (R) in the general election despite raising nearly $1 million to support her bid.[58]

She writes a blog called Lily’s Blackboard, an NEA-affiliated website, on the latest news in education.[59] She has recently written on making public school campuses “safe zones” for illegal immigrant students who would be at risk of deportation[60] and in favor of the federal government forcing local schools to open up restrooms to members of the opposite sex.[61] Garcia is paid a salary of $416,633.[62] Former President Dennis Van Roekel’s salary was higher in 2014 at $429,508, the final year of his tenure, though van Roekel’s previous salaries ranging from nearly $300,000 in 2010 to over $360,000 in 2011 were lower than Garcia’s.[63] Garcia’s salary was still less than Secretary-Treasurer Princess Moss’s $429,851 for the same year.[64]

Becky Pringle is the vice president of NEA and a former middle school teacher.[65] She was a member of the Board of Directors for the Pennsylvania State Education Association before moving to NEA. She spent six years as NEA’s secretary-treasurer before becoming NEA’s vice president.[66] In 2014, President Barack Obama appointed Pringle to the President’s Advisory Commission on Educational Excellence for African Americans.[67] She earns a salary of $371,278.[68]

Princess R. Moss is the secretary-treasurer of NEA and a former elementary school music teacher from Virginia.[69] She is the former president of the Virginia Education Association [70] and earns a salary of $429,851 at NEA.[71]

John C. Stocks is the executive director of NEA and is also the Board Chair on the left-of-center Democracy Alliance. Prior to NEA, Stocks served as assistant executive director for public affairs at the Wisconsin Education Association Council and has been honored for his leadership in left-of-center causes.[72] He has a history in community organizing, having worked for progressive grassroots organization Idaho Fair Share. He also served as an Idaho State Senator from 1988-1990.[73] Stocks earns a salary of $407,264 from NEA.[74]