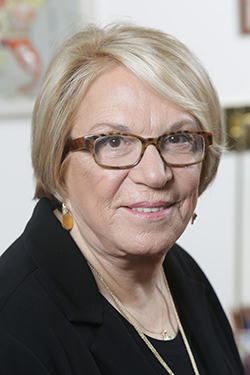 Gail Furman was a psychologist based in New York City and wealthy donor to Democratic Party-affiliated groups and candidates. [1] She died in April 2019. [2]

She helped fund David Brock’s 2004 launch of Media Matters for America,[3] has contributed hundreds of thousands of dollars to left-of-center candidates and groups such as President Barack Obama, the Democratic National Committee,  MoveOn.Org, and EMILY’s List. [4][5]

She also created the Furman Foundation, which has donated money to the Clinton Foundation, Center for American Progress, and the Tides Foundation. [6][7]

Gail Furman was born in Queens, New York in 1946. She obtained an undergraduate degree from the University of Michigan and a doctorate in psychology from New York University. In an interview conducted by the New York Times in 2008, Furman admits to being arrested during an anti-war protest at the Pentagon in 1967. Furman claims that at the time, she “was very angry if people didn’t burn their draft cards.” [8]

Furman had two sons, Jesse and Jason, with her former husband, New York real-estate developer Jay Furman. Both are prominent public figures with ties to President Barack Obama: Jesse is a United States District Judge of the United States District Court for the Southern District of New York, appointed by President Obama on June 7, 2011,[9] while Jason was named as the 28th chair of the Council of Economic Advisers on June 10, 2013. [10] Furman remained in this position until the conclusion of the Obama administration.

Furman also sat on the board of directors for the Democracy Alliance,[13] a collective of left-of-center donors that has been active in orchestrating “the activities of a permanent ‘left infrastructure’” since 2004. [14]

Furman was a member of “Patriotic Millionaires for Fiscal Strength,” a group which sent a letter to President Barack Obama in 2010 calling for tax increases. [15] The letter was co-signed by Furman and others such as Warren Buffet, Bill Gates, and George Soros. [16]

During the 2015 Democracy Alliance spring conference, Furman co-hosted a talk detailing new plans that the “Patriotic Millionaires for Fiscal Strength” would use to combat “political and economic inequality.” [17]

Furman contributed $75,000 to the creation of Vote Vets,[18] a left-leaning group identified with current and former military members that focuses on advancing left-of-center policies related to the environment, gay and lesbian rights, immigration, and organized labor. [19]

Furman has contributed hundreds of thousands of dollars to left-of-center candidates and groups.

She also contributed $52,500 to the MoveOn.Org Voter Fund,[21] a now-defunct Political Action Committee of MoveOn.Org, a centralized forum for petitions written by its left-of-center membership, advertises those petitions, coordinates issue advocacy and protests, and gathers donations from its members and from large-scale progressive donors which it uses to support left-wing causes and candidates. [22]

Furman has contributed a total of $11,875 to EMILY’s List,[23] a group that operates as a federal PAC that bundles and gives contributions to pro-abortion, female Democratic candidates for office. [24]

Furman created the Furman Foundation in 2000. The foundation has donated money to groups and organizations such as Media Matters for America, the Clinton Foundation, Center for American Progress, and the Tides Foundation. [25][26]