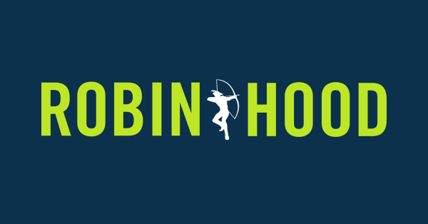 This is a logo for the Robin Hood Foundation.

Robin Hood is a left-leaning nonprofit associated with the financial industry that has been criticized for ineffectiveness at its stated mission of alleviating poverty in New York City despite massive fundraising successes. [1]

Robin Hood has been criticized for a lack of transparency that is at odds with the reporting and metrics-driven demands it makes of grant recipients, as well as for its connection to hedge fund industry groups that advocate for favorable tax treatment that decreases revenues to governments that provide public services to low-income residents. [5]

The organization operates a “Poverty Tracker” dashboard on its website in conjunction with Columbia University that makes claims such as “More than 50 percent of New Yorkers experienced food hardship at least once over a four-year period” and “Almost half of New Yorkers wouldn’t be able to cover an expense of $400 with cash.” [8] These figures are at odds with official poverty metrics, which Robin Hood attributes to its use of a proprietary and unique measure of “poverty” that is specific to New York City. [9]

Robin Hood’s model is to distribute as much each year in grants as it receives from donors, while its board members fund its administrative overhead costs. [10]

It attempts to apply financial industry principles to its grant programs, calculating a return on assistance to the poor per dollar of cost to Robin Hood. [11] It reportedly spends more than $500,000 per year performing these analyses. [12]

In 2018, Robin Hood released a report co-authored by academics at Columbia University and Robin Hood staff that opposed changes the Trump administration had proposed to immigration regulations. These “Public Charge” reforms would deny entry to immigrants who might potentially require government-funded services such as food stamps or Medicaid. [14]

Robin Hood was founded in 1988 by Paul Tudor Jones II and five fellow hedge fund managers. Its board has grown to include some of the most powerful people on Wall Street, including the CEOs of Goldman Sachs and J.P. Morgan Chase and leaders of some of the largest hedge funds in the world. [15]

Founding board member Harvey Weinstein resigned as a board member in October 2017 after several allegations of rape and sexual assault. [16]

The CEO of Robin Hood is Wes Moore, a U.S. Army combat veteran and author who worked in the U.S. State Department in the George W. Bush administration. [17] Moore took over in 2017 from David Saltzman, who was CEO for 27 years. [18]

Overall, 12 of the 19 men in leadership positions at Robin Hood are hedge fund managers. [21]

Robin Hood has been criticized for those connections, primarily by left-wing interests that promote higher taxes on hedge funds and other financial industry entities. [22] They claim that Robin Hood is a vehicle for tax avoidance by hedge fund managers, and that it inappropriately subsidizes the lobbying interests of the MFA.

With its hedge fund and finance industry roots, Robin Hood places what Institutional Investor Magazine described as an “unusual emphasis” for a nonprofit on its fundraising figures, and has been criticized for having, “too much emphasis on fundraising, not enough on results.” [23]

Robin Hood Foundation holds an annual gala that is one of the largest fundraising events in the country, and attended by financial industry executives, politicians, entertainment celebrities and other high-profile individuals. [24] Auction listings at the event frequently include celebrity-focused “experiences” such as music lessons from famous musicians such as Coldplay’s Chris Martin or the opportunity to play sports with professional athletes like NFL quarterback Tom Brady. [25] At the 2019 event, 23 attendees each pledged to donate $1 million to the organization. [26] [27]

The largest donation in Robin Hood’s history was a 2009 grant of $50 million over three years from George Soros. [28] The grant was contingent on the members of Robin Hood’s board matching Soros’s donation. Soros has been a donor to Robin Hood for decades and had previously made a $4.5 million grant in 1997 that was also at the time the largest donation the organization had received to date. [29]

Robin Hood previously invested some of its assets in hedge funds managed by board members and donors, paying $14 million in fees. [30] It received criticism for these arrangements, despite reporting higher returns from these investments than stock market averages and announced in 2007 that it was ending the practice.

A report by the left-wing union-backed pressure group Hedge Clippers analyzed Robin Hood ’s donors and estimated that for every $1 donated to Robin Hood, they received the equivalent of $44 in tax avoidance and support for tax policy advocacy that favored their interests. [31]

Charity evaluation organization GiveWell also performed an evaluation on Robin Hood and criticized its lack of transparency and accountability, while also questioning whether Robin Hood’s “impact-focused giving” delivered the claimed benefits. GiveWell concluded that Robin Hood’s grantmaking model is poor: “Robin Hood has essentially no transparency, and essentially no accountability, to the public and to its donors (at least the smaller donors, i.e., those giving tens of thousands of dollars).” [32] [33]