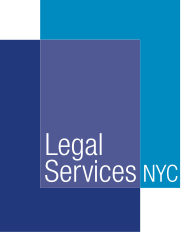 Legal Services NYC provides legal services to low-income individuals in New York City and New York state, and advocates for left-wing legal policies. The organization is based in Manhattan with offices in the other four boroughs of New York City.

In 1967, Community Action for Legal Services (CALS) was established by a group of lawyers working with federal offices established throughout New York City to provide legal services as part of the Johnson administration’s “War on Poverty.” In 1970, CALS litigated Goldberg v. Kelly, a legal case that saw courts establish a due process requirement to terminate welfare benefits. In 1974, Congress created the Legal Services Corporation (LSC), and CALS became one of its first grantees. Throughout the 1970s and 80s, nearly all of CALS’s funding came from the LSC. [1]

During President Ronald Reagan’s terms, funding to the LSC was cut. In response, New York State created the Interest on Lawyers Accounts Funds to fund groups like CALS. CALS further diversified its funding with federal, state, and local contracts and private donations. In 1989, CALS became Legal Services for New York. [2]

In June 2020, Legal Services NYC and a coalition of other groups released a roadmap for removing police from schools to be replaced by “healing-centered practices to support students with trauma.” The plan made a series of recommendations to the New York City government, including promoting anti-racism through “Culturally Responsive-Sustaining Education” and anti-bias education for teachers and administrators. [7]

Also in June 2020, Legal Services NYC issued a letter co-signed by other housing advocate organizations urging New York City’s civil and housing courts to stop all evictions both because of the COVID-19 pandemic and because many New York residents were preoccupied with the Black Lives Matter demonstrations. [8]

In December 2019, director of government benefits at Legal Services NYC Tanya Wong wrote a public statement condemning new regulations on the disbursement of food-stamp benefits (known as SNAP after the federal Supplemental Nutrition Assistance Program that provides them). [9]

In 2018, Legal Services NYC received $77,664,257 in funding, the bulk of which came from government contracts to provide legal services to low-income individuals. Federal contracts amounted to about $2 million, state contracts to $16.5 million, and New York City contracts to $33 million. Foundations, events, and individual donors contributed about $7 million combined. New York Community Trust, a massive donor-advised left-of-center nonprofit, was one of Legal Services NYC’s largest donors, with over $100,000 in funding. [10]