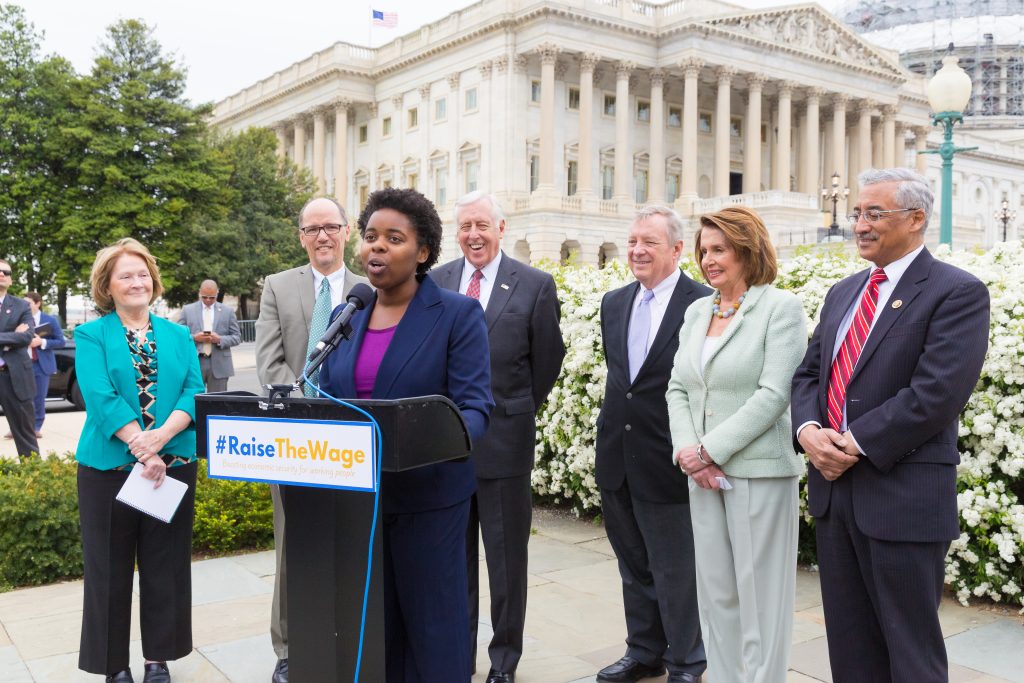 Jessica Wynter Martin - RaiseTheWage, 2016 (link) by US Department of Labor is licensed CC BY 2.0 (link)

Restaurant Opportunities Centers United (ROC or ROC-United) is one of the nation’s most prominent “worker centers,” labor-union-like organizations backed by union organizing know-how and left-of-center foundation funding. An outgrowth of a mutual-aid organization for the surviving unionized employees of the Windows on the World restaurant destroyed in the September 11th terrorist attacks, ROC has become a major player in support of union political and labor regulation efforts.[1]

Worker centers like ROC exist in a legal gray area and are able to conduct demonstrations and union-like corporate campaigning exempt from rules that govern labor unions.[2] Saru Jayaraman, a career labor movement organizer who is the co-director and co-founder of ROC, has called ROC’s approach “minority unionism,” noting that ROC “gets workers to act like a union even where the workers have not been legally recognized as a collective bargaining unit.”[3]

Legally, ROC is not a labor union but rather a 501(c)(3) charitable organization. Due to its tax status, it can receive substantial funding from left-wing foundations; the Ford Foundation alone has contributed over $4.4 million to ROC and its associated groups.[4]

During the Obama Administration, ROC was aligned closely with the U.S. Department of Labor, concluding an alliance agreement on worker education with the Occupational Safety and Health Administration (OSHA).[5] In addition to the alliance agreement, OSHA provided a $275,000 grant to ROC as part of a separate program on worker safety.[6] This drew criticism, as a ROC-operated restaurant in New York City had allegedly required unpaid labor and had a record of city health code violations.[7]

The story of Restaurant Opportunities Center-United begins in the aftermath of the September 11, 2001, attacks on the World Trade Center in New York. ROC was founded in April 2002 by union organizer Saru Jayaraman and former Windows on the World waiter Fekkak Mamdouh with the mission of assisting the 13,000 foodservice workers displaced from jobs by the attacks. The organization had close ties to the Hotel Employees-Restaurant Employees (HERE, now Unite-HERE) Local 100 union, which had represented the employees of the destroyed Windows on the World.[8]

The organization incorporated as Restaurant Opportunities Center of New York (ROC-NY) and reportedly provided support for the surviving Windows on the World employees and laid the groundwork for union organizing campaigns in the New York restaurant industry.[9] ROC opened a café, COLORS, which offered workers a share of ownership in exchange for 100 hours of labor, an amount increased in 2004; employees later sued ROC for violating labor law. A judge ruled that the workers were not legally employees and dismissed the case.[10]

By the late 2000s, ROC-NY incorporated a parent, national group for similar “worker centers” in other cities known as Restaurant Opportunities Centers-United, or ROC United. Jayaraman and Mamdouh took over as co-directors of the new national ROC. By 2014, ROC United had begun to absorb the New York group.[11]

Today ROC is a national organization that engages in aggressive activism and litigation to increase pay and benefits for restaurant workers. The group has been known to invade restaurants it is protesting and disrupt service using Occupy Wall Street-style “mic check” chanting. The group has also run a union-style “corporate campaign” against national chain restaurant operator Darden Restaurants, which owns Olive Garden and Red Lobster among other brands.[12] ROC also sues restaurants it alleges have violated wage and hour laws.[13]

While Restaurant Opportunities Centers United and its local affiliates act like labor unions, they are not legally recognized as labor unions which has major implications for ROC’s activities. This finding, first made by the National Labor Relations Board (NLRB) Division of Advice in 2006, is hotly contested.[14]

ROC is currently a 501(c)(3) nonprofit charity, which enables the group to receive funding from liberal foundations.[15] Commentators have expressed skepticism that ROC should retain 501(c)(3) status, arguing that some of ROC’s programs involving lawsuits on behalf of workers and negotiations before any firing at certain restaurants are a “substantial private interest” that should require a different tax-exempt status.[16]

The Federalist Society, a conservative-leaning legal group, published an analysis of ROC and other worker centers and the legal implications of their activities under federal labor law. The authors concluded that the NLRB erred and should have ruled that ROC was a labor organization. Labor organizations face more restrictive rules on picketing and demonstrations prior to organizing a workplace and the duty of fair representation of all employees after gaining exclusive bargaining.[17]

While ROC asserts it is not a labor union for tax and other legal purposes, ROC officials have expressed sentiments that ROC behaves like a union, and labor union officials have been enthusiastic about ROC and similar “alt-labor” organizing efforts. Jose Oliva, then the networks director for ROC, said, “My theory is that worker centers are just third-wave unions. We had craft unions, then industrial unions in the Industrial Revolution, and now we have a new economy. That new economy has given rise to a new form of unionism that we right now call worker centers.”[18]

Saru Jayaraman, ROC’s co-founder and co-director, has expressed similar views about using ROC for formal union organizing. In 2003, she wrote, “The goal is to create a labor-friendly climate in these places, so the union can organize them in a few years.”[19] She has additionally said, “And so we realize that what ROC really could be was a place to begin to organize the 99 percent of the industry that doesn’t have a union.”[20]

Restaurant Opportunities Center United is principally funded by foundations and other contributions, with a small proportion of its revenue coming from member dues.[21] The group has received small amounts of funding from labor unions, including $5000 from the Service Employees International Union (SEIU) in 2016.[22] In ROC’s early years, the restaurant and hotel union HERE reportedly acted as ROC’s fiscal sponsor.[23]

ROC’s largest benefactor in recent years has been the Ford Foundation, which has contributed over $4.4 million to the group.[24] Ford and ROC United are also close allies in programming: ROC co-director Saru Jayaraman launched one of her books at a Ford Foundation event.[25]

The group has received federal funding in the past, most controversially a $275,000 grant from the Department of Labor Occupational Safety and Health Administration that drew objections from Congressional Republicans.[27] ROC-New Orleans also received a $200,000 sub-grant through the Asian and Pacific Islander American Health Forum under a Centers for Disease Control and Prevention (CDC) program that was directed in part towards getting restaurants to join ROC’s association of restaurants supporting the labor agenda.[28]

Partnerships with the Obama Labor Department

During the labor union-friendly Obama Administration, ROC had partnerships with the federal Department of Labor. From 2011 to 2015, the Occupational Safety and Health Administration (OSHA) had an “alliance agreement” with ROC to educate workers on workplace safety laws.[29] Congressional Republicans criticized this agreement citing violations of health codes by the ROC-controlled restaurant COLORS.[30]

ROC United is a consistent supporter of the labor union-backed agenda of employment mandates and regulations. The group is perhaps most notable as a supporter of the “Fight for 15” minimum wage campaign launched by the Service Employees International Union (SEIU). Despite backing the campaign, Saru Jayaraman has endorsed even higher wage mandates: In a speech to supporters in North Carolina, Jayaraman demanded minimum wages as high as $21 per hour.[32]

ROC’s focus in minimum wage campaigns is eliminating the “tip credit,” the practice of allowing restaurant owners to count service workers’ tips toward satisfying the minimum wage. Under the slogan “One Fair Wage,” ROC campaigns to eliminate the tip credit alongside its campaigns to raise the minimum wage.[33] Employees paid in tips are frequently vocal opponents of changes to the tip credit; in 2016, the Democratic-controlled Maine House of Representatives Labor, Commerce, Research and Economic Development Committee voted to reinstate the state’s tip credit after activism from tip-earning employees.[34]

ROC has a long history of involvement in debates over immigration. Co-director Jayaraman worked for The Workplace Project, an immigrant-labor organizing group, when HERE asked her to help found ROC.[35] Fekkak Mamdouh, the other co-director of ROC, is himself an immigrant from Morocco and coauthored a book, The Accidental American, on his experience and its implications for immigration policy.[36] After the election of President Donald Trump on an immigration-restrictionist platform, ROC announced a “sanctuary restaurants” initiative to encourage restaurant owners to support comprehensive immigration reform including a path to citizenship for unauthorized aliens.[37] The program has also partnered with abortion-rights groups.[38]

FCWA and ROC proclaimed a “general strike” on May Day 2017, claiming over 300,000 workers would walk off the job.[42] Disruptions to commerce appeared to be minimal, with the Washington Post reporting, “Some said the turnout was lower than expected” at demonstrations in the nation’s capital.[43]

COLORS, the restaurant run by Restaurant Opportunities Center, has been a source of trouble for the organization, opening the group to charges of hypocrisy. Originally, workers at the restaurant were offered an ownership stake in exchange for 100 hours of unpaid labor; a lawsuit seeking back pay later alleged the terms were changed without warning.[44] Far from serving as a model of “high road” restaurant management in a pro-labor model, COLORS has gone in and out of operation and has a history of violations of New York City restaurant health codes.[45] The restaurant reportedly operated at a loss, as of early 2016.[46]

Other charges of hypocrisy have been leveled at ROC. Critics noticed that ROC put out a listing on the LinkedIn professional networking service for an unpaid graphic designer despite the group advocating doubling the federal minimum wage or more.[47] ROC also faced criticism for using FitzGibbon Media, a left-of-center public relations firm that shuttered after numerous allegations of sexual harassment by its founder Trevor FitzGibbon, for a campaign alleging widespread harassment of restaurant employees.[48]

In 2013, ROC amended its tax returns and admitted previously undisclosed lobbying activity. (Charitable organizations under Section 501(c)(3) of the tax code are permitted to lobby within certain limits and must disclose lobbying expenditure to the Internal Revenue Service.) The amendments came amid heightened scrutiny for the IRS, which had granted ROC-United tax-exempt status in 2009, during the conservative targeting scandal.[49]

Restaurant Opportunities Center of New York, the original ROC that was later re-absorbed into ROC United, was accused of hiring an illegal immigrant as its point person for the Obamacare Navigators program in 2013. Maria Marroquin, identified as “Health Education Organizer” for ROC-NY in 2013, had reportedly applied for protection from removal under President Barack Obama’s Deferred Action for Childhood Arrivals (DACA) program in 2012.[50]

In 2017, ROC posted classified ads to both LinkedIn and Idealist.org seeking a campaign manager. The ads emphasized that the worker would be classified as an independent contractor and not a full-time employee, potentially reducing the effective wage rate the manager would be paid. This is despite the organization’s advocating against companies hiring workers as independent contractors, stating that the practice leads to a denial of benefits and job security. The ROC also previously endorsed a bill targeting so-called “wage theft” by stating that independent contractors “are not entitled to the same minimum wage, overtime, and other protections as employees.”[51]

Saru Jayaraman serves as co-director of ROC-United and is the group’s principal ideological and intellectual face. Jayaraman is a career union and progressive organizer who was approached by HERE in the wake of the September 11th attacks to head ROC-NY; since taking control of ROC, Jayaraman has released books advocating for the restaurant labor movement.[52] In 2014, she was recognized by President Obama as a “Champion of Change” for her efforts to increase employment regulation and unionize the restaurant industry.[53]

Fekkak Mamdouh was a waiter and union shop steward at Windows on the World when the restaurant was destroyed in the September 11th attacks. Since the foundation of ROC, he has served as the group’s co-director and wrote a book advocating for liberalization of immigration laws.[54]