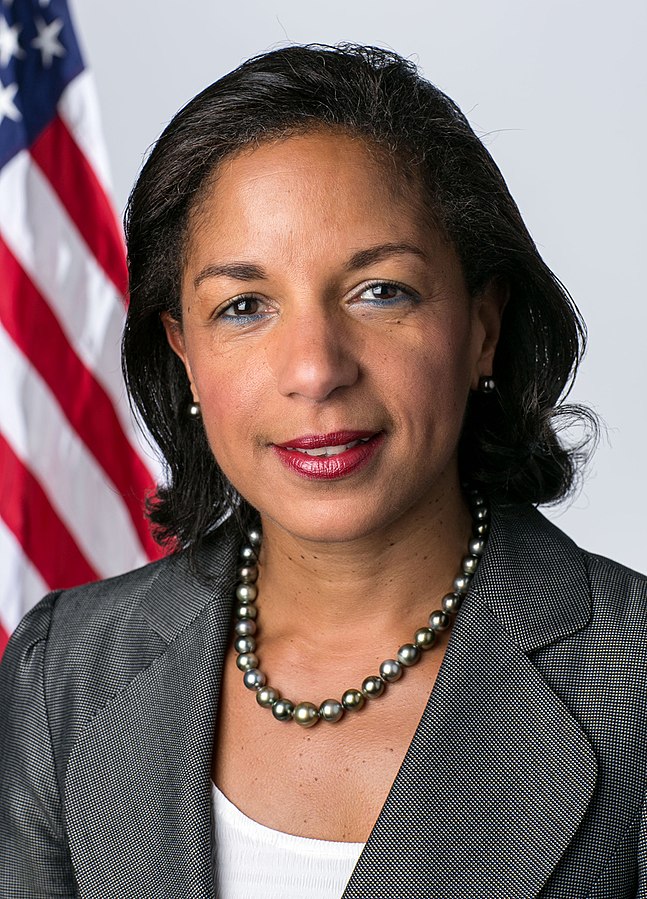 Susan Elizabeth Rice is a Democratic governmental aide, a former U.S. diplomat, and national security official. Under the Clinton administration, Rice held several positions on the White House National Security Council in addition to serving as Special Assistant to President Bill Clinton. From 2002 to 2008, she was a senior fellow at the Brookings Institution, a leading left-of-center think tank. Under the Obama administration, Rice served as the United States Ambassador to the United Nations and as National Security Advisor. [1]

Rice has worked for the influential international consulting firm McKinsey and Company. She has also served on the boards of several organizations, including the Bureau of National Affairs and the National Democratic Institute. Rice received her master’s and doctoral degrees, both in international relations, from Oxford University in England and her bachelor’s degree in history from Stanford University in California. [2]

In December 2020, then-President-elect Joe Biden announced his intent to appoint Rice as head of the White House Domestic Policy Council. Politico reported that the decision to put Rice in charge of domestic policy came as a surprise due to her lack of prior experience outside of foreign policy. Politico also reported that the incoming Biden administration had considered nominating Rice for Secretary of State, but noted that she would have faced opposition from Senate Republicans due to her controversial statements on the 2012 attack on American diplomatic facilities in Benghazi, Libya. [3]

Susan Rice worked as a foreign policy aide to former Massachusetts Governor Michael Dukakis (D) during his 1988 presidential campaign. [4] From 1993 to 1997, Rice served as Senior Director for African Affairs on the White House National Security Council in the Clinton administration. She then moved to the position of Assistant Secretary of State for African Affairs. When President Clinton left office, she moved into the private sector. [5]

In the lead-up to the 2003 invasion of Iraq, Rice claimed it was “clear that Iraq poses a major threat” and that “its weapons of mass destruction,” reports of which turned out to be based on dubious intelligence, “need to be dealt with forcefully.” Rice did not explicitly endorse war, though she said she hoped that the United States would “bring as many countries as possible with us … even as we move forward as we must on the military side.” [6][7] In 2004, Rice worked on the presidential campaign of then-U.S. Senator John Kerry (D-MA). [8]

Susan Rice worked as a senior foreign policy advisor to the Obama 2008 campaign. [9] In 2009, then-President Barack Obama nominated Rice to serve as the United States Ambassador to the United Nations (UN), a position she served in until 2012. [10] As UN Ambassador, Rice supported the overthrow of Libyan dictator Muammar Gaddafi and perpetuated the claim that Libyan troops had engaged in mass sexual violence against the civilian population. An investigation by Amnesty International found no evidence to support this claim. [11] In 2012, Rice supported the overthrow of Syrian dictator Bashar al-Assad and criticized Russia and China for vetoing a United Nations Security Council resolution calling on Assad to step down. [12]

In September 2012, members of an Islamist militia attacked two American diplomatic facilities in Benghazi, Libya, killing United States Ambassador Christopher Stevens and three other American service personnel. Five days after the attack, then-Ambassador Rice made a statement blaming the violence on a YouTube video criticizing Islam that had sparked outrage in several Muslim countries. Intelligence officials later reported that the attacks were coordinated and had been planned well in advance. In response, Rice claimed that she had been relying on initial intelligence reports that had turned out to be faulty. [13] However, transcripts of emails between Rice and Obama administration national security official Ben Rhodes showed that Rhodes had instructed Rice to “underscore that these protests are rooted in an Internet video, and not a broader failure of policy” on the part of the Obama administration. [14]

Republican lawmakers and right-of-center media heavily criticized Rice’s initial comments and subsequent justification. In December 2012, Rice, who had been under consideration to replace outgoing Secretary of State Hillary Clinton, announced her desire to “not continue to be considered by the president for nomination,” calling it “the best thing for our country, for the American people.” [15] In July 2013, however, President Obama selected Rice for National Security Advisor, a position she held until Obama left office in January 2017. [16]

Following the inauguration of former President Donald Trump in January 2017, reports emerged that Rice had requested that intelligence agencies involved in alleged spying on the Trump campaign reveal the identities of some of the American citizens they were investigating. Republicans and supporters of President Trump accused Rice of targeting them for political purposes, which she denied doing. Rice also denied Trump’s claim that his residence and offices at Trump Tower in New York City were wiretapped during the 2016 campaign. [17] In September 2017, however, new reports showed that the Federal Bureau of Investigation (FBI) had targeted former Trump campaign chairman Paul Manafort, who had a residence at Trump Tower, with wiretapping and other surveillance measures. [18]

In December 2020, then-President-elect Biden announced that he would nominate Rice to lead the White House Domestic Policy Council. Politico reported that Rice, whose previous experience was primarily in foreign policy, had also been under consideration for Secretary of State. [19] In April 2021, Rice defended President Biden’s planned major expansion of federal government involvement in education and the economy. In response to criticism from Republicans such as U.S. Senator Tim Scott (R-SC), Rice claimed that President Biden’s trillion-dollar proposal would not interfere with Americans’ livelihoods. [20]

Susan Rice is a member of the board of directors at the entertainment company Netflix. She also worked for the global consulting firm McKinsey and Company in the early 1990s. [21] Rice has received criticism from left-of-center sources over her time in the corporate world. The American Prospect, a left-progressive magazine, reported that in addition to her time at McKinsey, Rice had worked at the geopolitical strategy firm IntelliBridge – now known as Eurasia Group – in 2001 and 2002. During that time, she worked with Paul Kagame, the autocratic leader of Rwanda who has been accused of dictatorial practices and human rights abuses. [22]

The explicitly Marxist magazine Jacobin also mentioned Rice’s time at McKinsey in an article calling for the Democratic Party to sever ties with all political figures and public officials who had previously worked for the consulting firm. Jacobin attacked McKinsey for working with pharmaceutical companies that had allegedly enabled the opioid addiction crisis and called it “one of the worst consultancies on earth.” [23]

The investigative journalism site OpenSecrets, a project of the Center for Responsive Politics (CRP) estimated that Rice had a net worth between $23 and $43 million as of 2009. At the time, CRP reported that Rice had invested as much as $7 million in energy corporations such as BP, Enbridge, TransCanada, Encana, TransAlta, Cenovus, and Imperial Oil. CRP also reported that Rice had invested up to $14 million in several major financial institutions, including TD Bank Financial, the Royal Trust Corporation of Canada, and the Royal Bank of Canada. [24]

Susan Rice’s mother was a businesswoman and education funding advocate who served on the boards of 11 major American corporations. Rice’s father was an economics professor at Cornell University in Ithaca, New York and a member of the Federal Reserve Board of Governors. [25] Rice is married to television producer Ian Cameron, who has worked for ABC News and the Canadian Broadcasting Corporation. Rice and Cameron have two children. [26]