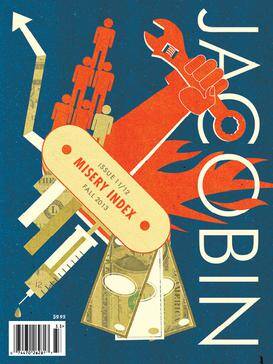 Jacobin magazine is an explicitly Marxist publication founded in 2010 by Bhaskar Sunkara. Sunkara has said his goal in creating Jacobin was “the broader political project of rebuilding the socialist movement in the US…” Jacobin produces a quarterly print publication with 50,000 subscribers and a website with 2 million monthly views. Sunkara initially recruited colleagues from the Democratic Socialists of America to write and edit the magazine. [1] [2] [3]

Examples of Jacobin‘s radical content include headlines such as “Burn the Constitution,” [4] “There’s No Such Thing as Good Philanthropy,” [5] and “Yes, a Planned Economy Can Actually Work.” [6] Jacobin has received praise from left-leaning public figures such as radical academic Noam Chomsky and MSNBC host Chris Hayes. [7] [8] David Sirota, a left-leaning journalist and political consultant frequently employed by the U.S. Presidential campaigns of U.S. Sen. Bernie Sanders (I—Vermont), has also been an editor-at-large for Jacobin. [9]

Jacobin was founded in 2010 by Bhaskar Sunkara, who holds the titles of founding editor and publisher. [12]

Sunkara has said his goal in creating Jacobin was to represent “a politics that was neither Leninist nor the kind of broad liberal-left opinion you get in, say, The Nation or In These Times,” and that his “broader political project” was “rebuilding the socialist movement in the US…” He has described Jacobin as “explicitly Marxist,” “programmatically socialist,” and “crassly political…” [13]

Jacobin claims a readership of 50,000 subscribers for its quarterly print publication and 2 million monthly online views. The magazine’s average “print-run” is 42,000. According to a Columbia Journalism Review profile, most of Jacobin’s subscribers joined during and immediately after the 2016 election campaign when it became “the unofficial house organ of the [Bernie Sanders] movement.” [14] [15] [16]

Jacobin is primarily funded by subscriptions. In 2014, approximately 20 percent of Jacobin revenue came from donations, but this percentage declined as Jacobin achieved a wider circulation. Subscription options provided on the website include comments such as, “If life has treated you well, you should feel guilty about it and subscribe at the high-income rate for the cause,” “The more years you select, the better we can construct our master plan to seize state power,” and “We want as many people to read Jacobin as possible. Postal rates are beyond our control — for now.” [17] [18]

In an online solicitation for donations, the Jacobin editors refer to radical-left academic Noam Chomsky as “Jacobin Comrade #1” and quote an endorsement Chomsky gave of their work:[23]

“The appearance of Jacobin magazine has been a bright light in dark times. Each issue brings penetrating, lively discussions and analyses of matters of real significance, from a thoughtful left perspective that is refreshing and all too rare. A really impressive contribution to sanity, and hope.” [24]

In a 2013 New York Times profile of Jacobin founder Sunkara Bhaskar, left-leaning MSNBC host Chris Hayes called Sunkara, “really remarkable,” and said Sunkara had “the combination of boastful assurance and competence of a very good young rapper.” [25] Elsewhere, Hayes has praised Jacobin, saying that even though there is “a lot in there that I don’t necessarily agree with,” Jacobin is “a really well-done publication, almost preternaturally good” and “bracingly rigorous and polemical in a really thought-provoking way.” [26]

Vox’s Dylan Matthews praised Jacobin as “perhaps the most relevant and important publication of the American political left today.” [27]

Jacobin is led by founder, editor, and publisher Bhaskar Sunkara, who created the website and magazine in 2010 while a student at George Washington University. He recruited other young colleagues as writers and editors, initially in unpaid positions. Jacobin began paying writers and editors in 2013. The first paid editor was Micah Uetricht. [28]

Sunkara is the former vice-chair of the Democratic Socialists of America. [29] [30] He is the author of The Socialist Manifesto The Case for Radical Politics in an Era of Extreme Inequality, a book that “explores socialism’s history since the mid-1800s,” and a “vision for its future” in America. [31]

Remeike Forbes is the creative director. [32] He is also a member of the board of directors of the Jacobin Foundation Ltd. [33]

David Sirota, a left-leaning journalist and political consultant frequently employed by the U.S. Presidential campaigns of U.S. Sen. Bernie Sanders (I—Vermont), has also been an editor-at-large for Jacobin. [34]

Jacobin refers to donors as “Jacobin Comrades” and solicits them online with this pitch:[38]

“Lenin didn’t have Ford Foundation money — he had Stalin rob banks instead. We here at Jacobin are in a tough position: we’re not much for physical courage, but we too want to avoid asking rich donors for money.” [39]