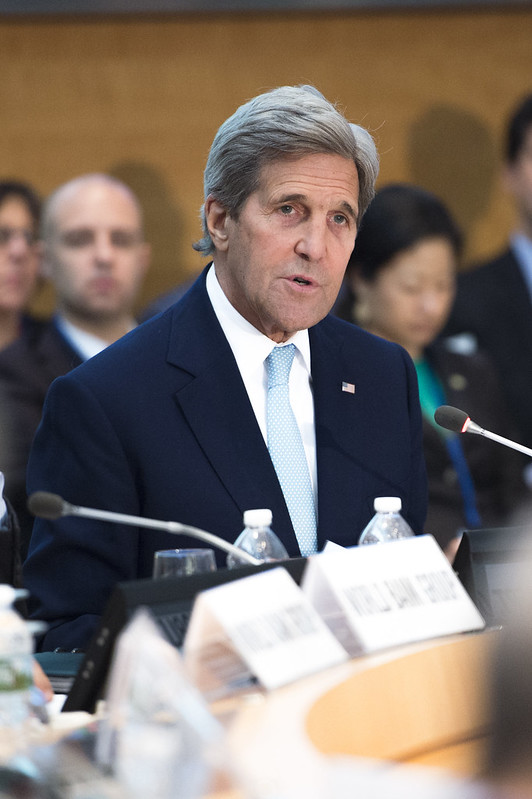 John Kerry is a former U.S. Senator, presidential candidate, and U.S. Secretary of State. Kerry is currently the U.S. Special Presidential Envoy for Climate under President Joe Biden. Special Envoy Kerry’s politics have been assessed in the past as on the left wing of the Democratic Party. [1]

Special Envoy Kerry started his political career after returning from two tours of duty with the Navy in the Vietnam War. He became an outspoken anti-war activist before running for Congress in 1972, losing in a close race despite being the favorite and receiving ample funding. [2]

After earning his law degree, working in the Lowell District Attorney’s Office, and starting his own private law firm, Kerry returned to politics with a successful run for lieutenant governor of Massachusetts in 1982. In 1984, Kerry successfully ran for U.S. Senate where he remained until 2013, primarily focusing on foreign policy. In 2004, then-Senator Kerry ran for president and was defeated by former President George W. Bush. In 2013, Kerry resigned from the Senate to serve as Secretary of State under President Barack Obama. He returned to the White House in 2021 to serve under President Biden. [3]

John Kerry was born in 1943 in Aurora, Colorado. His father, Richard Kerry, was a foreign service officer and his mother was a homemaker. Kerry comes from a wealthy extended family, with descendants from the first colonial governor of Massachusetts Bay, John Winthrop, and the wealthy Forbes merchant family. Richard Kerry’s work moved the Kerry family to Massachusetts and then Washington, D.C. for most of Kerry’s early childhood. When Kerry was seven, his father got a job in the U.S. Department of State and moved the family to Europe. In 1990, Richard Kerry wrote a memoir, Star Spangled Mirror, which was highly critical of U.S. foreign policy during the Cold War. [5][6]

Kerry attended an elite boarding school in Switzerland and later returned to the United States, where he attended boarding schools in Massachusetts and New Hampshire. [7] In 1962, Special Envoy Kerry began attending Yale University as a political science major. He also became a member of the Skull and Bones Society, a student organization whose alumni include former Presidents William Howard Taft, George H.W. Bush, and George W. Bush; conservative writer William F. Buckley; and a number of other high-level government officials. Kerry also became the head of the Liberal Party of the Student Union and president of the Student Union. [8] He briefly dated Janet Auchincloss, Jacqueline Kennedy’s half-sister and met former President John F. Kennedy on a sailing trip. [9]

During his final years at Yale, Special Envoy Kerry became involved in early anti-Vietnam War activism. In a junior year speech, he claimed the “specter of Western imperialism…causes more fear among Africans and Asians than communism and thus, it is self-defeating.” [10]

In 1970, Kerry married Julia Thorne, with whom he had two children. Thorne was instrumental in purchasing homes in two congressional districts for Kerry’s first congressional run in 1972. Special Envoy Kerry and Thorne divorced in 1988. [11]

In 1966, Kerry enlisted in the Naval Reserve and served two terms in South Vietnam. At first, he spent a few months aboard a frigate patrolling the coast, but he was then assigned to skipper a PCF “swift boat,” a patrol boat that operated in Vietnam’s internal waterways. The position and location of his patrols was considered dangerous and likely to encounter combat. [13]

Kerry has attributed many of his foreign policy views in the decades since the 1970s to his time in military service in Vietnam. [15]

During then-Senator Kerry’s 2004 presidential campaign, critics questioned his military service. The 527 political organization Swift Boat Veterans for Truth formed out of 250 Vietnam veterans who opposed Kerry. These veterans, including some who served with Kerry, accused him of exaggerating and lying about his combat experience. A series of TV advertisements from the group were launched against Kerry’s campaign, though many consider the claims made against Kerry to be false. [16][17]

In 1970, Kerry returned to the United States and became an anti-war activist. He claimed to have wanted to speak out against the war while serving, but refused to do so while still in uniform.  Kerry’s father encouraged him to use his military experiences to protest against the war. [18]

Kerry joined Vietnam Veterans Against the War. In 1971,  Kerry testified in front of the U.S. Senate on proposals to end the war. Soon after, he participated in a march in which over 1,000 Vietnam veterans threw their medals over a fence in front of the U.S. Capitol building. [19] On May 30 that year, Kerry was arrested on a protest march from Concord to Boston. [20]

In 1970, Special Envoy Kerry first considered running for Congress in the Massachusetts 3rd Congressional District. He deferred, then decided to run the following term in the 4th Congressional District. His wife, Julia Thorne, purchased a home in the district to make it their official residence, but they decided instead to move to Lowell so that Kerry could run in the 5th District. [21]

Kerry ran against nine Democratic primary challengers. He was seen as an outsider who had “jumped the line” over local Democratic politicians and did not fit in with Lowell’s working-class constituents. He was also criticized for his anti-war activism. Kerry’s brother and his campaign manager were arrested for trespassing in Lowell City Hall in an incident that the media compared to Watergate.  Kerry won the Democratic primary but eventually lost to former U.S. Representative Paul W. Cronin (R-MA). The race was the most expensive in Congress that year, with Kerry getting most of his funding from outside the district. [22]

In 1982, Kerry ran for lieutenant governor of Massachusetts. He was elected alongside then-Governor Michael Dukakis (D-MA), who put Lt. Gov. Kerry in charge of state-federal relations. Kerry gained national recognition for his efforts to combat acid rain. [25][26]

In 1984, U.S. Senator Paul Tsongas (D-MA) resigned for health reasons, and Lt. Gov. Kerry ran to replace him. Despite not receiving the Democratic Party’s endorsement,[27] Kerry won the Democratic primary and general election by campaigning on a platform of freezing construction on all nuclear weapons. Special Envoy Kerry was reelected four times, serving in the Senate from 1984 until 2013. [28]

Kerry’s time in the Senate was primarily focused on foreign policy. In 1985, he joined the Senate Foreign Relations Committee and remained a member throughout his Senate career. He became chairman of the Committee in 2009. [29]

According to National Journal, Kerry was considered one of the most left-leaning U.S. Senators throughout his career. In 2004, Senator Kerry was voted the most liberal member of the Senate, closely followed by his 2004 presidential running mate, former U.S. Senator John Edwards (D-NC). Kerry consistently voted with Democrats on foreign policy issues and took the most left-wing positions on social issues in the U.S. Senate. During his first term, then-Sen. Kerry did not vote for a single Republican bill. [30]

In 1985, Senator Kerry controversially attempted to broker negotiations in the Nicaraguan Civil War between the communist Sandinistas and the reactionary Contras. Kerry offered the Sandinistas a ceasefire in exchange for the United States ending its financial support for the Contras. Then-President Ronald Reagan condemned the peace offering as acting against the interests of American efforts to oppose Soviet influence in Central America. Congress ultimately rejected the plan. However, an investigation launched by Kerry, known as the Kerry Report, found evidence of illegal arms sales to the Contras by American military officer Oliver North, a scandal which eventually came to be known as the Iran-Contra Affair. [31]

In 1994, Senator Kerry was credited with spearheading the normalization of diplomatic relations between the United States and Vietnam. [32]

On October 11, 2002, Special Envoy Kerry voted to authorize then-President George W. Bush to use military force for an invasion of Iraq to depose Saddam Hussein. Nonetheless, Kerry later voted against an $87 billion bill to fund the military operation and spoke out against the Iraq War. [33]

Despite being heavily involved in the U.S. Senate’s foreign policy, Kerry was criticized for demonstrating a lack of leadership during his years in the Senate. [34]

In 2004, then-Senator Kerry ran for president. In the Democratic primaries, he defeated Governor Howard Dean (D-VT) and Sen. Edwards before naming the latter as his running mate. Special Envoy Kerry reportedly offered the post to former U.S. Senator John McCain (R-AZ), who turned down the opportunity. [35]

In the general election, Senator Kerry faced incumbent President George W. Bush, with the wars in Iraq and Afghanistan at the center of the election. Kerry was criticized as a “flip-flopper” for voting for the initiation of the Iraq War and then voting against its funding and speaking out against it in Congress. He was also attacked for his war record and his left-wing record on social issues in the Democratic Party. Kerry ultimately lost the election, though he retained his position in the U.S. Senate. [36]

Senator Kerry considered running for president again in 2008 but ultimately chose not to do so.  Kerry endorsed then-Senator Barack Obama (D-IL) and joined the Obama campaign. Special Envoy Kerry stood in for Republican candidate, then-Sen. McCain, in debate preparation. Kerry was reportedly considered as a potential running mate for President Obama but was passed over for then-U.S. Senator Joe Biden (D-DE). He was also considered for Secretary of State, but President Obama selected Hillary Clinton instead during his first term. [37]

In 2013, Kerry resigned from the U.S. Senate to become Secretary of State for President Obama’s second term. [38] Kerry primarily dealt with turmoil in the Middle East concerning the Israel-Palestine conflict, Saudi Arabia, and Iran. He also negotiated President Obama’s policies in Syria and applied diplomatic pressure to Russia in response to its Syrian intervention and invasion of Ukraine. [39]

The Atlantic described Special Envoy Kerry’s term as Secretary of State as ambitious but “aloof.” Special Envoy Kerry reportedly centralized information in the State Department with an inner circle and largely ignored the rest of his staff. Special Envoy Kerry’s foreign policy priorities changed constantly and eschewed long-term strategy, leading to a “diplomatic attention deficit disorder.” [40] The Brookings Institution gave Special Envoy Kerry a “solid interim grade” for his cautious handling of many affairs but criticized him for being weak on China and Russia. Brookings characterized Secretary Kerry as a pure diplomat rather than a strategist. [41]

In 2020, after President Joe Biden’s election, Kerry was appointed U.S. Special Presidential Envoy for Climate, a newly-created Cabinet-level position. Chief among Special Envoy Kerry’s tasks are reaffirming the 2015 Paris Climate Agreement, which was originally crafted with his input as U.S. Secretary of State under President Obama. Special Envoy Kerry will also be a sitting member of President Biden’s National Security Council since climate change is considered an “urgent” national security threat by the Biden administration. [42]

On April 25, 2021, the New York Times published a leaked recording of a conversation between economist Saeed Lelaz and Iranian Foreign Minister Mohammad Jafir in which Jafir discussed the dominance of the Revolutionary Guard in the Iranian government. At one point in the tape, Jafir claims that former Secretary of State Kerry had told him that Israel had attacked Iranian assets in Syria over 200 times. [43]