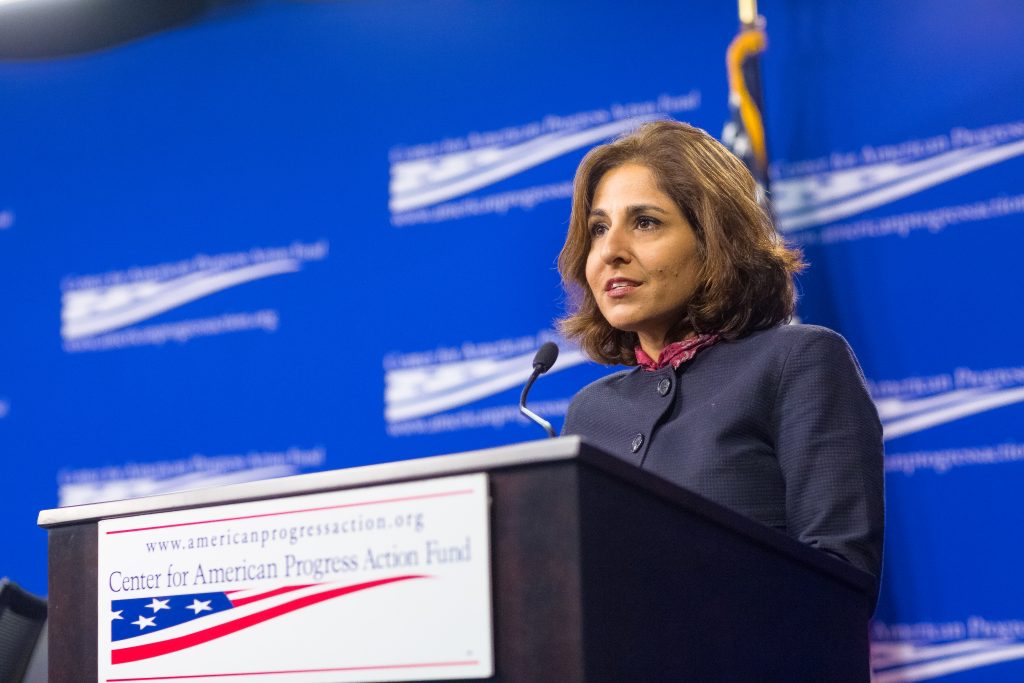 Neera Tanden is a long-time confidante of the Clinton political family and a former Obama administration aide who has served since 2011 as president and CEO of the Center for American Progress (CAP), a left-of-center think tank cofounded by Democratic Party fixer John Podesta.

Neera Tanden was born in Bedford, Massachusetts to immigrant parents from India. At the age of 5, her parents divorced, leaving her mother to raise Tanden and her brother alone. She received her undergraduate degree at the University of California at Los Angeles (UCLA), followed by a law degree from Yale. While at UCLA, she met her now husband, an artist named Ben Edwards, while she was involved with the presidential campaign of Democratic candidate Michael Dukakis. She and her husband have two children.[1]

After Tanden joined then-President Bill Clinton’s re-election campaign in 1996, she served as a White House aide to President Clinton and as a top staffer in Hillary Clinton’s Senate office. She later served as policy director for Hillary Clinton’s 2008 Presidential campaign.[2] Following Hillary’s 2008 Democratic primary defeat, Tanden worked as director of domestic policy for the Obama campaign and was reportedly the highest-ranking person on the Clinton’s campaign to go to the Obama administration. [3] In the administration she worked as a senior advisor to Health and Human Services Secretary Kathleen Sebelius and was credited as a “key architect” of Obamacare. [4]

In November 2011, Tanden left the Obama administration and took over as President of the Center for American Progress, a left-wing think tank. [5] Under Tanden, CAP has pushed a number of liberal prerogatives, including tax increases, legal status for large groups of illegal immigrants, controversial environmentalist policies.[6]

In 2016, Tanden was an informal adviser to Hillary Clinton’s 2016 presidential campaign[7] and was named one of one of four co-chairs for the abortive Clinton transition team.[8] As a result, CAP was labeled “Hillary Clinton’s government-in-waiting.” [9] In October 2016, Tanden said, “I would do whatever Hillary needs always. I owe her a lot. And I’m a loyal soldier.”[10]

After Clinton was defeated by Republican candidate Donald Trump, Tanden committed the Center for American Progress’ resources to rapidly and forcefully “resisting” the new administration.[11]

Ties to the Clinton Family

Neera Tanden’s career has largely been defined by her relationship with the Clinton political family.[12]

Politico has described Tanden as a “longtime Clinton confidante,”[13] while Vox labeled her “one of the more liberal members of Clintonland.”[14] Tanden, Politico wrote, “has spent the better part of two decades at Clinton’s side — first as a White House aide, then as a top staffer in her Senate office, later as policy director of the 2008 campaign.” [15] In fact, then-First Lady Hillary Clinton threw Tanden a wedding shower at the White House. [16]

Following her time in the Clinton White House, Tanden worked on Hillary Clinton’s 2000 U.S. Senate campaign as a deputy campaign manager and issues director before working as a legislative director in her Washington, D.C. office.[18] During Hillary’s 2008 presidential campaign, Tanden served as Hillary’s policy director during the Democratic primaries. [19]

Following Hillary’s 2008 Democratic primary defeat, Tanden joined the Obama-Biden campaign as its director of domestic policy. [20] Tanden claims that she was the highest-ranking person on the Hillary campaign to serve in the Obama administration.[21]

She was a senior adviser for health reform at the Department of Health and Human Services[22] and has been described as a “key architect” of Obamacare. [23]

The Center for American Progress

In November 2011,[24] Tanden left the Barack Obama administration and replaced John Podesta, formerly White House Chief of Staff under Bill Clinton and later Counselor to the President in the Obama White House and chair of Hillary Clinton’s Presidential campaign, as president and CEO of the liberal think tank Center for American Progress.[25] In 2015, Tanden also took over control of the Center’s lobbying arm, the Center for American Progress Action Fund.[26]

She also later claimed that her goal was to shift the national political conversation in a liberal direction.[27] As she put it, “our goal has always been to have a pan-progressive tent.”[28]

Under Tanden, the CAP and its action fund have supported a number of left-wing policies. In 2012, the Center proposed a $1.8 trillion tax increase plan that included a tax rate hike, called for government-funded preschool months before President Obama included the same demand in his 2013 State of the Union address, and has fought for legalization of the roughly 11 million illegal immigrants in the United States.[29]

Tanden also took credit for encouraging President Barack Obama to implement various liberal policies on immigration, energy and the environment, and labor mandates through presidential executive order instead of congressional legislation. She later said President Obama did “most of what we [CAP] asked.”[30]

Tanden was an informal adviser to Hillary Clinton’s 2016 presidential campaign, providing political advice in a private capacity while her think tank provided intellectual backing and advocacy support to the Clinton campaign’s policy efforts.[31][32]

Due to both Tanden and Podesta’s large roles with the Clinton campaign, the Washington Post wrote that the Center For American progress, “is poised to exert outsized influence over the 2016 president race and — should Hillary Clinton win it — the policies and agenda of the 45th President of the United States.” [33]

Similarly, after Tanden was named one of one of four co-chairs for the Clinton transition team Politico wrote the Center For American Progress was “Hillary Clinton’s government-in-waiting.” The article noted that through this organization Tanden would be able to serve Clinton’s interests once again as a powerful outside adviser who would play a central role in a Presidential transition.[34]

During Tanden’s confirmation hearing to lead the Office of Management and Budget (OMB), the former head of CAP was grilled by Republican Missouri Sen. Josh Hawley over CAP’s donors, which include foreign nations and big business entities. The organization received $665,000 from the Chan Zuckerberg Institute, $1 million from the managing partner of Bain Capital, and $2.5 million dollars from the United Arab Emirates. Tanden denied any potential conflict of interest, saying that she was “proud of the record of the Center for American Progress and policies that would limit the power of Wall Street and limit the power of tech companies.” [35]

In November 2020, President-Elect Joe Biden nominated Tanden to be the next director of the Office of Management and Budget (OMB). During her confirmation hearing on February 9, 2021, Tanden was questioned by Sen. Rob Portman (R-OH) over her past tweets directed at Republican Senators. Tanden apologized for her rhetoric on social media, claiming that while her role at CAP was to be an “impassioned advocate” she had come to regret the language she used in some tweets. [36] The Biden administration eventually withdrew Tanden’s nomination in March 2021 after key Democratic and Republican senators came out in opposition to her nomination. [37]

In 2016, many of Tanden’s emails to cohort John Podesta were leaked by Wikileaks, an entity believed to be associated with foreign intelligence services.[38] In a late 2016 summary of her email correspondence the liberal blog the New Republic said that the contents of those emails demonstrated “a pattern of freezing out those who don’t toe the line, a disturbing predilection for someone who is a kind of gatekeeper for what ideas are acceptable in Democratic politics.”[39]

Moreover, The New Republic’s report claimed that the emails revealed that Tanden’s work as a surrogate for the Clinton campaign went beyond her appearances on television. The report indicated she was actively working to conserve the Clinton campaign’s political capital, rather than pushing it to spend it on policies that liberals would expect a think tank like CAP to support. [40]

Additionally, the language that Tanden used in the emails against people she disagreed with became a point of controversy. The New York Times described Tanden’s emails as “profanity-laced” and fiercely protective of Hillary Clinton.[41]

In one 2015 email to Podesta, Tanden suggested that the person responsible for allowing Clinton’s State Department correspondence to be conducted over a private email server should be “drawn and quartered.” [42]

After the 2016 election, Tanden announced that she was committing CAP and CAP Action resources to rapidly and forcefully “resisting” the newly elected president Donald Trump.[43]

Tanden has a long history of making profane and controversial comments.

During the 2017 wildfires in southern California, New York Magazine’s David Wallace-Wells tweeted, “NBC News in LA is reporting that the wildfires are now burning down [News Corporation executive chairman] Rupert Murdoch’s house,” to which Tanden replied, “There’s a God, and she’s unhappy,” describing the fire as an act of “karma.” Tanden later deleted the tweet, saying “it wasn’t funny.”[48]

In a piece for the Huffington Post in 2016 entitled, “Donald Trump Doesn’t Deserve the Support of American Hindus” she questioned an Indian-American businessman’s support for Republican candidate Donald Trump and suggested because of his race, he should not support the candidate of his choosing.[49]