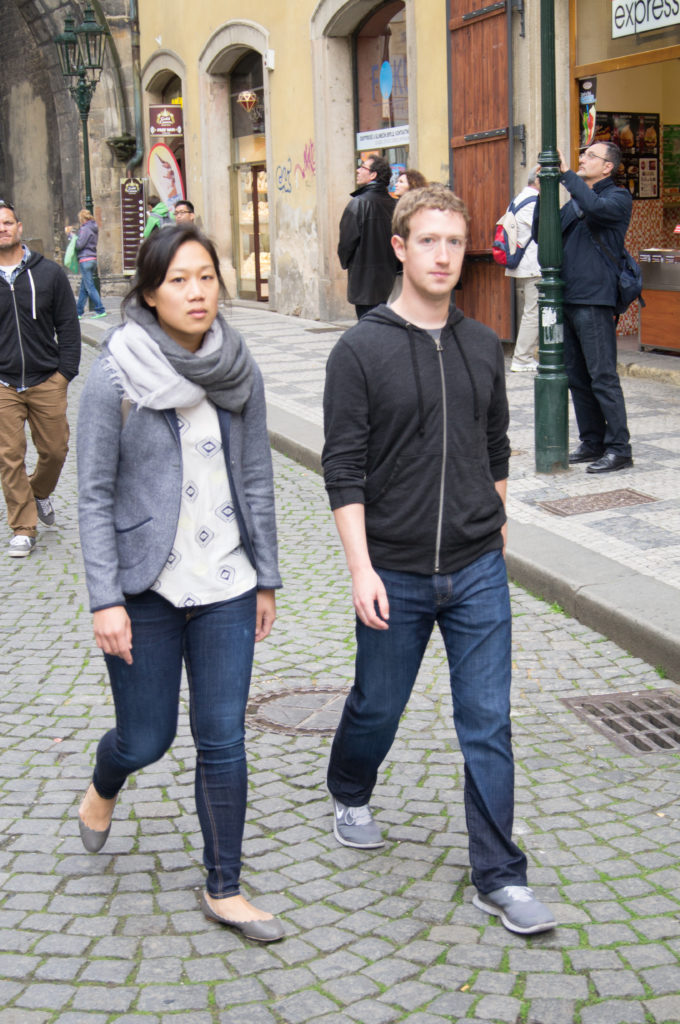 Priscilla Chan and Mark Zuckerberg in Prague (2013). (link) by Lukasz Porwol is licensed CC BY 2.0 (link)

The Chan Zuckerberg Initiative is the grantmaking brand of Facebook billionaire Mark Zuckerberg and his wife Priscilla Chan. Though the Initiative has broadly nonpartisan goals, it donates to many left-of-center foundations and a substantial fund to Zuckerberg’s pro-Democrat PAC, FWD.us.

The Initiative is organized as an LLC, which means the corporation is not exempt from income tax but allows more flexible operations and fewer legal standards for public disclosures. The Chan Zuckerberg Foundation (CZF) and Chan Zuckerberg Advocacy (CZA) are a tax-exempt charitable foundation and tax-exempt lobbying group respectively that operate under the Initiative’s umbrella. The Initiative is on track to become one of the largest nonprofits in the world, with Zuckerberg and Chan pledging to donate 99% of their Facebook stock over their lifetimes.

Though not legally required to do so, the Initiative discloses all disbursed funds. As of September 2020, the Initiative, CZF, and CZA have given 919 grants and have started 15 “initiatives,” or investments in companies.

The Chan Zuckerberg Initiative was announced on Facebook on December 1, 2015, at the birth of Zuckerberg and Chan’s first child. [1] Zuckerberg announced that the Initiative would be financed by his and Chan’s fortune. Over the course of their lifetimes, Zuckerberg and Chan will donate 99% of their Facebook stock, amounting to $45 billion in 2015,[2] and currently close to $100 billion. [3] Currently, the Bill and Melinda Gates Foundation has an endowment of almost $48 billion, making it the second-largest nonprofit in the world. [4] As of 2018, the CZF and CZA have a cumulative endowment of almost $5 billion,[5][6] but the Initiative LLC’s finances are not public.

As an LLC, the Initiative’s tax implications differ from standard nonprofits. Stock given to the Initiative will not result in tax credits and will remain under Zuckerberg and Chan’s control via their ownership of the Initiative. However, when they liquidate or contribute these shares for direct grants, they will receive tax credits. Additionally, by transferring their wealth in company shares to the Initiative, Zuckerberg and Chan can avoid paying estate taxes on their wealth in the future upon their deaths. On the other hand, the LLC will be liable for income or capital gains taxes on any successful investments into for-profit companies. [7]

Zuckerberg has long been a proponent of education policy changes. In 2010, before the establishment of the Chan Zuckerberg Initiative, Zuckerberg donated $100 million to public schools in Newark, New Jersey. [10]

The Initiative has given 178 science grants, nearly all of which has gone to medical research, hospitals, and medical universities. [15]

The Initiative has given 212 justice and opportunity grants, many of which have gone to left-of-center organizations. Expansionist immigration advocacy groups have received much funding, including over $1 million to the National Immigration Forum, $550,000 to the Immigrant Legal Resource Center, $200,000 to the American Immigration Council, $150,000 to the Black Alliance for Just Immigration, and $120,000 to the Justice Action Center. [16]

Left-wing social policy nonprofits have also received millions, including $1.6 million to the Civil Rights Corps, $1.1 million to Forward Justice, $500,000 to Common Justice, and $255,000 to the Poverty and Race Research Action Council. [17]

Since 2015, the Initiative has given almost $24 million to the FWD.us Education Fund, the charitable advocacy component of FWD.us, a left-of-center group founded by Zuckerberg in 2014 that supports liberalized immigration, criminal justice reform, and higher education spending. [19]

However, the Initiative has also contributed to a few right-of-center and libertarian organizations, including $958,000 to the American Conservative Union Foundation, $185,000 to Conservatives for Criminal Justice Reform, and $175,000 to the Cato Institute. [20]

The Chan Zuckerberg Initiative was one of the original donors to fund the creation of the California Black Freedom Fund (CBFF) at the end of 2020. The CBFF is a left-of-center grantmaking organization that funds California-based groups that seek to eliminate what it perceives as systemic racism. It used funding from the original donors to provide grants that went towards advocacy for targeted redistricting, so-called racial equity, and the firing of who it determines are racist police officers. [21]

Funding to the Center for Tech and Civic Life (2020)

In 2020, the Silicon Valley Community Foundation funneled $328,176,850 to the Center for Technology and Civic Life (CTCL), a left-leaning Chicago-based nonprofit that redistributed the funds as COVID-19 “relief grants” to thousands of county and city elections offices, from the Chan Zuckerberg Initiative, which maintains a donor-advised fund account at the SVCF. It funneled a further $69.5 million to the Center for Election Innovation and Research (CEIR) from the Chan Zuckerberg Initiative, a left-leaning nonprofit that redistributed the funds to secretaries of state. [24]

Critics have observed that both the CTCL and CEIR funds were used to boost Democratic turnout in key battleground states in the 2020 election, helping to defeat President Donald Trump. [25]

Mark Zuckerberg is the co-founder, CEO, and largest shareholder of Facebook. As of September 2020, he was the 3rd richest person in the world with an estimated net worth of $98 billion. [26] Priscilla Chan is a licensed pediatrician and former teacher. The two met while attending Harvard University and married in 2012. [27]

Starting in 2017, there were rumors of Zuckerberg running for president as a Democratic candidate,[31] but he has since denied any intention and did not run in the 2020 elections. [32] However, Zuckerberg did privately advise former South Bend Mayor Pete Buttigieg (D) during his 2020 Democratic presidential candidacy. [33]

In 2017, David Plouffe was hired as the president of policy and advocacy of the Initiative. Plouffe worked on numerous Democratic campaigns in his early career before joining political consulting firm AKPD Messenger and Media in 2001. In 2007, the firm ran Barack Obama’s presidential campaign and is largely credited for his victory. Afterward, Plouffe served as a senior advisor in President Obama’s administration. [36]

Also in 2017, the Initiative hired Benenson Strategy Group to perform research. The Group was founded and is run by Joel Benenson, a former communications director for the unsuccessful 1994 re-election campaign of New York Governor Mario Cuomo (D)[37] and the chief strategist for Hillary Clinton (D-NY)’s 2016 presidential run. [38]

In 2017, the Initiative hired Amy Dudley as chief spokesman and eventually vice president of executive communications. Dudley is a longtime Democratic operative, who has worked as the communications director for Senator Tim Kaine (D-VA), national spokesperson and senior adviser to Senator Kaine when he was Hillary Clinton’s presidential running mate, a press secretary to Vice President Joe Biden (D-DE), and as a press secretary to Senator Ted Kaufman (D-DE). [39]

In 2017, the Initiative appointed Ken Mehlman as a board member of its policy advisory board. Mehlman is a longtime Republic operative who was director of the Office of Political Affairs under President George W. Bush, a manager of Bush’s 2004 reelection campaign, and chairman of the Republican National Committee. Mehlman came out as gay in a 2010 interview and was an early proponent of state-recognition of same-sex marriages in the Republican Party. [40]