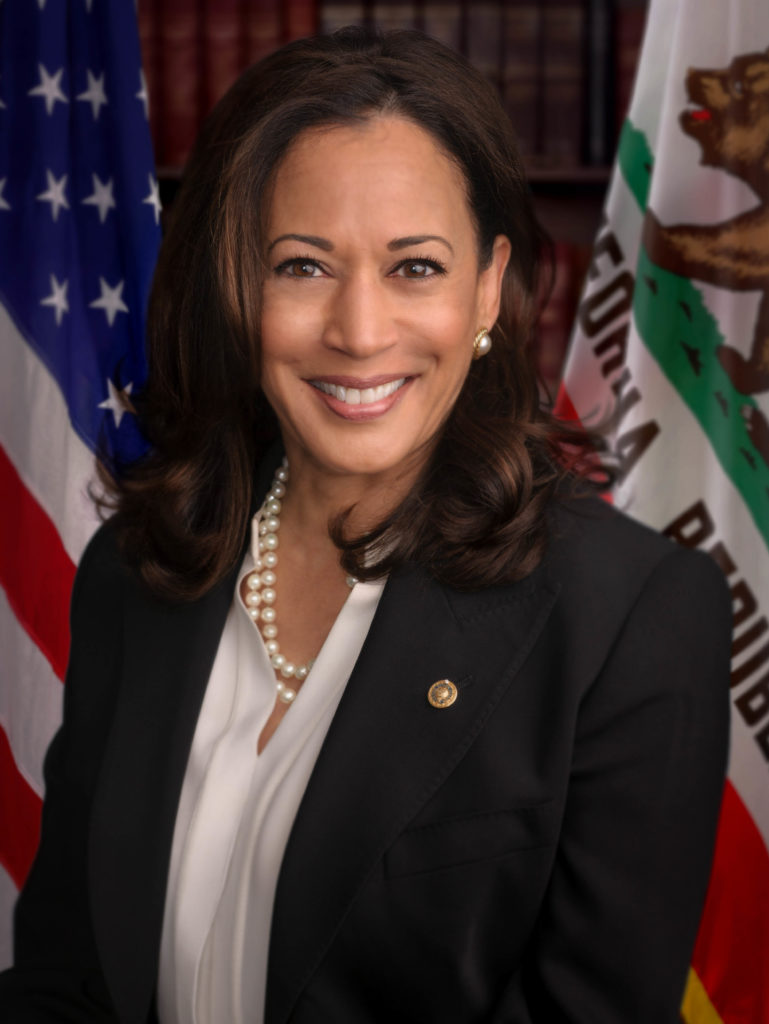 Kamala Harris is Democratic politician from California. Before her election to the Vice Presidency of the United States in the Biden administration, she was a United States Senator, California Attorney General, a former district attorney, and a former prosecutor.

Harris started her career as a prosecutor in California. She advanced in the San Francisco district attorney’s office, partially with the assistance of her former boyfriend, then-San Francisco Mayor Willie Brown (D), the former Speaker of the California State Assembly. Harris was then elected district attorney of San Francisco and then Attorney General of California. Harris’s record as a district attorney reflected both left-progressive and right-of-center criminal justice policies. Nonetheless, during the 2020 Presidential election, Harris made efforts to portray herself as left-progressive. She has been criticized for inconsistency and political opportunism for her policy changes.

Harris was elected as a Democrat to the United States Senate in 2017 and served half a term before running for President in 2020. After taking a brief lead in the polls, Harris’s popularity fell until she dropped out of the race in December of 2019. Harris endorsed current President-elect Joe Biden three months later, who later chose her as his running mate on the Democratic ticket. After Biden’s 2020 general election victory, Harris became Vice President-elect of the United States.

Kamala Harris was born in Oakland California in 1964. Her father, Donald Harris, was an economics professor at Stanford University from Jamaica. Her mother, Shyamala Gopalan, was a cancer researcher from India. Harris’s parents met while they were studying at the University of California, Berkeley and often brought Harris to campus protests as a child. Harris’s parents divorced when she was seven years old, and Harris lived with her mother. [1]

In first grade, Harris began attending Thousand Oaks Elementary School in Berkeley, California as part of a bussing program to racially integrate the school. Throughout elementary school, Harris regularly attended both an African-American Baptist church and a Hindu temple. Harris moved to Montreal, Canada to attend middle school while her mother taught at McGill University. [2]

In 1982, Harris began attending Howard University, a historically black college in Washington D.C., where she majored in economics and political science. [3] While at Howard, Harris worked as a mailroom clerk for former U.S. Senator Alan Cranston (D-CA). [4]

After graduating in 1986, Harris attended the University of California Hastings College of the Law through the Legal Education Opportunities Program, which offers preferential admissions to underprivileged students. [5] At Hastings, Harris sat as president of the Black Law Students Association. [6] In 1990, Harris passed the bar in California. [7]

In 1990, Harris began her law career as a deputy district attorney in Almeda County, California. [8]

In 1994, Harris began dating then-Speaker of the California Assembly Willie Brown (D-San Francisco). Brown was considered one of the most influential politicians in California and had been investigated by the Federal Bureau of Investigations (FBI) for alleged conflicts of interest. [9] At the time, Harris was 29 years old, and Brown was 60 and still legally married, though he had been separated from his wife for more than a decade. [10]

As Speaker of the California Assembly, Brown appointed Harris to two positions: the California Unemployment Insurance Appeals Board (1994) and the Medical Assistance Commission (1994-1998). [11] The posts paid Harris $80,000 per year in addition to her deputy district attorney salary and laid the groundwork for her future political career. In 1995, Brown was elected mayor of San Francisco. Shortly after his election, Brown and Harris ended their relationship. [12]

Harris’s ties to Brown have drawn sharp criticism. Some media outlets have accused Harris of “dat[ing] her way to the top,” or using her relationship with Brown to advance her career through nepotism. [13] Other critics, like the San Francisco Chronicle, have accused Harris throughout her career of being beholden to Brown, who as California Assembly Speaker and then Mayor of San Francisco was one of the most powerful politicians in California for three decades. [14]

In 1998, Harris was appointed assistant district attorney by then-San Francisco district attorney Terence Hallinan. In this post, Harris prosecuted many “three-strike cases,” which mandated life imprisonment for three-time felony offenders. Hallinan and Harris were notable allies in campaigning against California Proposition 21 in 2000, a proposal which granted prosecutors the discretion to try certain defendants under the age of 18 in superior courts for serious crimes without the permission of the more lenient juvenile courts and made certain juvenile murderers ineligible for juvenile court. [15]

Proposition 21 eventually passed, after which Harris filed a complaint against Solomon and resigned. [17]

As a district attorney, Harris was considered a “moderate progressive” who promised to roll back the policies of her predecessor to more effectively reduce crime in the state. Harris has since tried to distance herself from this stance and claim to be more politically left-wing. [23]

Harris promoted a number of left-of-center policies as a district attorney. Harris refused to prosecute death penalty cases and supported the “Back on Track” program, which permitted punishments outside of incarceration for first-time offenders. Harris also opposed Proposition 8, which would ban same-sex marriage in California, and she supported outlawing the “gay panic” criminal defense, which allowed those charged with assault against an LGBT individual to claim self-defense in the case that they believed they were going to be assaulted. [24]

Harris supported some right-of-center positions as well. As California Attorney General, Harris refused to support a ballot initiative that would eliminate the death penalty in California, thereby prompting criticism that Harris acted inconsistently or opportunistically to preserve her political career. She also supported a law which prosecuted truancy as a misdemeanor criminal offense and punished parents for truant children. [25] More recently, Harris has been criticized for her record of prosecuting drug crimes, including marijuana crimes, despite her current position which favors decriminalizing marijuana. [26]

In 2010, while Harris was San Francisco district attorney, a crime lab technician was discovered to be skimming cocaine from evidence for personal use, thereby invalidating the results of over 1,000 pending drug cases. The technician had a prior domestic violence conviction which should have prohibited her from holding the job in the first place. Harris’s office was held responsible for the incident by San Francisco Superior Court Judge Anne-Christine Massullo because Harris had a policy of not asking office employees about their criminal records during the hiring process. [27]

In 2012, Harris entered into negotiations with the United States Department of Justice (DOJ) over a settlement to California to be paid by major banks as compensation for fraud and predatory lending which allegedly led to the 2008 financial crisis. Harris rejected the DOJ’s initial offer of $4 billion in compensation. Critics accused Harris of rejecting the offer to grandstand and gain publicity as she prepared to run for a seat in the U.S. Senate. The DOJ eventually raised its settlement to $18.4 billion. [28]

In late 2017, Harris called for the resignation of former U.S. Senator Al Franken (D-MN), after allegations of sexual harassment in the midst of the #MeToo movement. After Sen. Franken resigned, Harris was appointed to his seat on the Senate Judiciary Committee. She made headlines numerous times for her aggressive questioning of those testifying before Congress , including Facebook founder Mark Zuckerberg and U.S. Attorney General William Barr. [31][32]

In the June 2019 Democratic primary debate, Harris drew headlines for criticizing then-rival Joe Biden for not supporting bussing, a controversial Civil Rights-era policy which forced the desegregation of schools by bussing students between school districts. The strong showing briefly made Harris the apparent front-runner in the crowded Democratic field, with 15% support in the polls. [34]

Harris stayed near the top of the polls until the August debate when then-U.S. Representative Tulsi Gabbard (D-HI) criticized Harris for having a harsh prosecutorial record that clashed with her progressive image, particularly regarding marijuana crimes. Harris’s poll numbers declined following the debate. [35]

On March 15, 2020, Biden announced that his running mate would be a woman. On August 17, Biden picked Harris as his running mate, making her the first non-white woman to be nominated for the office by a major political party. With the victory of Biden and Harris over President Trump and Vice President Mike Pence in the general election, Harris became Vice President-elect of the United States. [37] She is to take office on January 20, 2021.