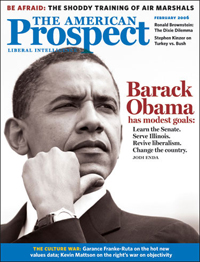 Cover of the February 1, 2006 issue of the political magazine The American Prospect (link)

The American Prospect is a left-progressive publication that promotes left-of-center public policy through articles on its website and in print. Founded in 1989 by Robert Kuttner, Paul Starr, and former Clinton administration Secretary of Labor Robert Reich, the Prospect has received grants from a number of left-of-center organizations, including the Rockefeller Brothers Fund, William and Florda Hewlett Foundation, and W.K. Kellogg Foundation. [1]

Founded in 1989 following the Democratic Party’s loss of three successive presidential elections, the American Prospect was created with the intention of restoring “plausibility and persuasiveness to American liberalism” by addressing national economic and social policy issues. [2]

The Prospect was created with help from a group of founding sponsors including Michael Weinstein, a Nobel-winning economist;[3] Marian Wright Edelman, the founder and president emerita of the Children’s Defense Fund;[4] Shirley Williams, a prominent left-wing politician in the United Kingdom;[5] and John Kenneth Galbraith, an economist and adviser to President John Kennedy who also worked as president of the left-of-center Americans for Democratic Action. [6]

The first issue of the Prospect appeared in spring 1990 and intended to contribute to “the creation of a durable liberal majority.” Beginning as a quarterly magazine, the publication started with a paid circulation of 2,700. By 1999, it claimed that circulation had reached more than 24,000 subscribers. [7] An early adopter of electronic journalism, the magazine launched a website in 1994 that highlighted pieces from the print magazine, published online articles responding to breaking news, and hosted a group blog called “Tapped.” [8] The Prospect’s print circulation continued to grow, and the magazine adjusted publishing to accommodate a biweekly magazine that later became a monthly magazine. [9] Today, the Prospect publishes six issues a year, in addition to maintaining its website. [10]

The Prospect has received grants from various organizations over the years, including $25,000 each year from 2017 to 2019 from the Bauman Foundation, a left-of-center foundation with ties to the Democracy Alliance. [17]

The Prospect was founded by Robert Reich, Robert Kuttner, and Paul Starr. After co-founding the Prospect, Reich served as Secretary of Labor in the Clinton administration. He co-founded Inequality Media Civic Action, a left-leaning digital media company, and is a professor of public policy at the University of California, Berkeley. Reich is also the chairman of Common Cause, a left-of-center advocacy group focused on advancing left-of-center policies. [24]

Kuttner is a co-founder and co-editor of the Prospect and is a professor at Brandeis University. [25] He also co-founded the Economic Policy Institute, a left-of-center research institute supported by labor unions. [26]

Starr is the author of eight books and is the co-founder and co-editor of the Prospect. He is also a professor of sociology and public affairs at Princeton University. [27]