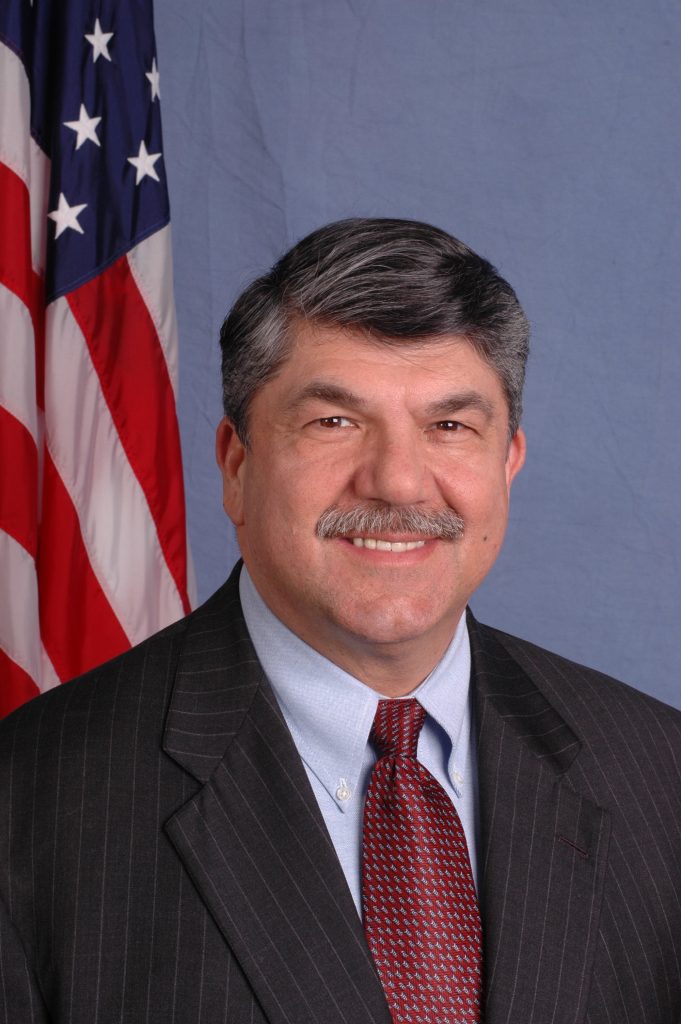 AFL-CIO portrait of Richard Trumka. (link) by AFL-CIO is licensed CC BY 2.0 (link)

Richard Trumka was the president of the American Federation of Labor-Congress of Industrial Organizations, better known by its acronym AFL-CIO, from September 2009 until his death in August 2021.[1] Prior to taking office as AFL-CIO president, he served as secretary-treasurer of the union federation under John Sweeney, as president of the United Mine Workers of America (UMWA), and as an attorney for the UMWA. Trumka was highly controversial, with allegations of financial improprieties and strike-related violence following him as he rose through the ranks.

A third generation coal miner, Trumka took a job in the mines at age 19. After graduating from Pennsylvania State University and law school at Villanova University, he began work as a staff attorney for the United Mine Workers of America at the union’s Washington, D.C. headquarters. By 1982, he was president of the union, and during his 13-year reign, he built a reputation for outspoken and aggressive action, especially against the management of businesses the UMWA sought to organize. The aggressiveness came to a head in 1993, when Trumka led the UMWA out on strike against Peabody Coal, an action characterized by violence that left one non-union worker, Eddie York, dead of a gunshot wound.[2]

Later, after becoming chief lieutenant to John Sweeney at the AFL-CIO, Trumka was accused of directing $150,000 in union funds to the election campaign of Ron Carey, who was running for the office of president of the International Brotherhood of Teamsters (IBT). Trumka took the Fifth during the investigation and ultimately avoided charges, although the AFL-CIO changed its financial practices to prevent further such schemes.[3]

After completing law school, Trumka went to work as a staff attorney for the coal miners’ union, the United Mine Workers of America. By 1982, Trumka had been elected president of the union, a position he would hold until 1995.[4]

In 1989, Trumka led a strike against Pittston Coal Company following a dispute over health care and pension benefits. The strike led to substantial civil disobedience, with allegations of substantial violence and intimidation. Strikers and associated outlaw “wildcat strikers” allegedly spread bent-nail devices on roads.[5] Union members were charged with throwing rocks at non-striking employees and company vehicles.[6] A Pittston coal truck driver was wounded by fire from a shotgun.[7]

In 1993, Trumka ordered 17,000 workers to walk off jobs with Peabody Coal, reportedly telling strikers to “kick the shit” out of employers and workers who resisted the union.[8] Strikers reportedly vandalized homes, shot at a mine office, and cut power to another mine, temporarily trapping 93 miners underground.[9]

During the wave of violence, a nonunion heavy equipment operator named Eddie York was shot in the back and killed as he attempted to drive past strikers. Those who tried to help York were pelted with rocks. Instead of denouncing the horrific incident, Trumka declared, “I’m saying if you strike a match and put your finger in, common sense tells you you’re going to burn your finger.”[10] York’s widow sued the union for $27 million, naming Trumka as one of the co-defendants. The case was settled out of court in 1997.

Secretary-Treasurer of the AFL-CIO

Trumka embroiled the federation in controversy shortly after taking office.  Trumka was close to Ron Carey, the president of the International Brotherhood of Teamsters who had brought the exiled Teamsters back into the AFL-CIO fold and who was locked in a re-election battle with James Hoffa, Jr. Corruption scandals surrounding the election resulted in the vote being invalidated by federal regulators. Carey was removed from office, expelled from the union, and charged by federal investigators (though he was acquitted at his criminal trial).[11]

Trumka was implicated in the money-laundering and kickback scandals that enveloped Carey and led to his expulsion from office. He allegedly snuck $150,000 in union funds to Citizen Action, a progressive organizing group, which then shuffled $100,000 of the money on to Carey’s campaign consultants. Under questioning from federal investigators, Trumka took the Fifth.[12]

Under pre-1997 AFL-CIO rules, union officers who took the Fifth Amendment were obligated to resign their posts. However, Sweeney had the rules changed so that Trumka could remain in office despite taking the Fifth Amendment in the Carey investigations.[13] Amid the fallout from the Carey affair, Trumka reduced his public profile substantially.[14]

He re-emerged on the national scene as a cheerleader for the presidential campaign of then-Senator Barack Obama (D-Illinois). While the AFL-CIO did not endorse Obama for president until it was clear that he would be the Democratic nominee, by the United Steelworkers convention in July Trumka was already shaming union members inclined to vote against the Democratic candidate. “We can’t tap dance around the fact that there are a lot of white folks out there…(who) just can’t get past this idea that there’s something wrong with voting for a black man.”[15] He later added, “There’s not a single good reason for any worker—especially any union member—to vote against Barack Obama […] There’s only one really, really bad reason to vote against him: because he’s not white.”[16]

On Sept. 16, 2009, Trumka accepted the presidency of the AFL-CIO at the federation’s convention in Pittsburgh. In his acceptance speech, Trumka laid out an aggressive and ambitious progressive agenda.

Pushing proposed card check legislation (known as the Employee Free Choice Act), Trumka vowed, “I swear to you that, come hell or high water, we will win […] and bring unionism to every worker in the United States.”[17] He called for more pension, education and child care benefits, higher taxes on high income earners, strict financial regulation, and protectionism.[18]

Trumka pushed for an aggressive healthcare reform, calling it “the cornerstone of any progressive economic agenda.”[19] While vowing to help President Obama pass whatever bill might come forward, Trumka also emphasized that to be truly worthy of union support, any final health care bill would have to include a government-run plan, or public option.

Trumka’s agenda saw mixed results during the period of total Democratic control during President Obama’s first term. The Democrats passed a healthcare reform that became Obamacare, but it did not include a government-controlled healthcare plan. The card check legislation, which would have eased unionization by effectively eliminating secret-ballot votes in union organizing, failed, despite being a higher AFL-CIO priority. Administration appointments favored labor more obviously: Obama appointed Hilda Solis to be Secretary of Labor and nominated two union lawyers, Craig Becker and Mark Pearce, to tilt the balance on the National Labor Relations Board (NLRB).

Despite unhappiness with the Democrats’ failure to pass a public option and enact “card check,” the AFL-CIO launched 200,000 volunteers in a multi-faceted effort called “Labor 2010” to re-elect Democrats.[20] Trumka has continued the aggressive Democratic partnership in subsequent election cycles, with major contributions to Democratic efforts in the 2012, 2014, and 2016 elections.

That support earned Trumka substantial face-time with the Obama administration. Through 2011, White House visitor logs showed Trumka made at least 48 visits to the White House, with two face-to-face meetings with President Obama and one meeting with Vice President Joe Biden.[21]

Trumka has represented the AFL-CIO at meetings of the liberal donor conclave Democracy Alliance. He spoke on a panel on economic policy in 2010.[22] Trumka also made an appearance at a Democracy Alliance meeting in 2014.[23] The AFL-CIO is a substantial contributor to the Democracy Alliance, with records showing the union federation contributing $116,546 to the group in its 2016 fiscal year.[24]

On the night of the 2020 presidential election, Trumka released a statement alongside Chamber of Commerce CEO Thomas Donohue asking voters to be patient with the vote counting process. “We call on the media, the candidates, and the American people to exercise patience with the process and trust in our system, even if it requires more time than usual,” the two organizations said in a statement. [25]

After President Joe Biden’s inauguration, Trumka endorsed a statement by the AFL-CIO’s executive board calling for eliminating the filibuster. The statement described the filibuster as “an artifact of Jim Crow. A creature of white supremacy.” [26]

Trumka was a staunch supporter of the PRO Act, stating that the PRO Act must pass as it was a “litmus test” for the AFL-CIO’s lobbying success under the Biden administration. [27] Critics have argued that the PRO Act is “one of the most radical, anti-worker bills” as it allows labor unions to have access to employees’ personal information without requiring consent. [28]

Trumka was reported to have been critical of President Joe Biden for shutting down the construction of the Keystone XL pipeline without ensuring that there would be jobs waiting for the displaced construction workers. Trumka and other labor union executives met with Biden to support a bill creating an infrastructure plan reliant on environmentalist energy, agreeing that “climate change is a crisis.” [29]

In addition his position as president of the AFL-CIO, Trumka sat on the boards of directors of numerous left-progressive groups. Trumka sits on the boards of numerous AFL-CIO affiliated groups, such as the American Center for International Labor Solidarity, the Working For America Institute, Union Plus, and Working America.[31] Other labor-aligned groups had Trumka on their boards: The Union Sportsmen’s Alliance, Theodore Roosevelt Conservation Partnership, Economic Policy Institute, United Seamen’s Service, Union Labor Life Insurance Company (ULLICO), and Citizens for Tax Justice all see Trumka sit on their boards.[32] Trumka was a named board member of left-wing economic policy agitation group Jobs With Justice, although he was represented by proxy.[33]