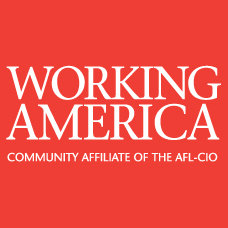 This is a logo for Working America. (link)

Working America is the “community affiliate” of the AFL-CIO, focusing on advocacy for and community organizing of non-union members. The group, founded in 2003, claims more than 3 million members, though as few as 15 percent may pay the $5 annual dues.[1]

Working America is heavily subsidized by its parent, the AFL-CIO labor union federation. In the AFL-CIO’s 2016 fiscal year, the federation provided Working America with over $12 million, of which $7.6 million was directed to political activities and lobbying.[2]

Working America canvasses neighborhoods to recruit and activate for political advocacy workers whose workplaces are not unionized. During election season, they return to those homes to tout principally Democratic candidates to voters.[3] In the 2016 election cycle, Working America made no federal independent expenditures that supported Republicans.[4]

The AFL-CIO organized Working America in 2003 as a way to channel union dues toward outside political advocacy in a pre-Citizens United era.[5] (Prior to the 2010 Citizens United v. FEC Supreme Court decision, unions could not use their general treasury funds to advocate to nonmembers.) Labor activists hoped that Working America and other left-of-center constituency groups could “play much of the role that the Democratic Party filled—at least in theory—before campaign finance reform [the Bipartisan Campaign Finance Reform Act, also known as McCain-Feingold] cut off the flow of soft money to political parties.”[6]

The organization’s early activities were based in Cleveland, Cincinnati, and Seattle with a focus on political activation.[7] By 2010, the group was a key player in labor’s national political activation strategy, with organizers on the ground focusing on working-class white voters in competitive states.[8]

Working America sought to recruit supporters to the Occupy Wall Street movement’s far-left economic and political messaging.[9] In 2012, Working America canvassed heavily for the reelection of President Barack Obama. The organization pushed an aggressive labor-aligned message against Republican candidate Mitt Romney, with a focus on states in the industrial Rust Belt.[10]

By 2013, Working America planned to have chapters in all states by 2018. The group also started more workplace-focused organizing, which AFL-CIO President Richard Trumka hoped would lay the basis for formal unionization campaigns.[11]

Activism During the 2016 Election

Working America was heavily involved in the effort to elect Democrat Hillary Clinton as U.S. President in the 2016 election, knocking on up to 2.5 million doors in support of the former Secretary of State, mostly in battleground states such as Florida, Ohio, and Pennsylvania.[12] CBS News reported on Working America canvassers spreading through the North College Hill neighborhood in Cincinnati a month before the election, “doing voter registration and persuasion work among voters still deciding between Clinton and [Republican nominee Donald] Trump.”[13]

Working America spent at least $4.2 million during the election cycle, fielding some 540 canvassers at the peak of election season.[14] The organization reportedly had over 80 canvassers with intention to hire up to 200 by the end of the campaign in Ohio alone.[15]

Working America was one of the first groups to alert Democrats that Republican nominee Donald Trump was polling well with union members in traditional union-stronghold areas like Cleveland and Pittsburgh.[16]

Working America attempts to persuade non-union-members to the union side using economic issues. Working America focuses on convincing the people it targets to adopt “class consciousness” (to quote Working America executive director Karen Nussbaum) and to believe that the interests of employers and employees are incompatible.[18]

Working America collected more than $50 million in total from national, state, and local unions between 2012 and 2016.[26]

Working America is led by Karen Nussbaum, long active in left-wing and labor union politics. In 1968, she joined the Black Panther Support Committee and was active in the anti-Vietnam War movement into the 1970s.[27] While serving as president of Service Employees International Union (SEIU) Local 925 in Boston, she founded the feminist group 9to5, which became known as the National Association of Working Women.[28] She later served as director of the Women’s Bureau in the U.S. Department of Labor under President Bill Clinton.[29] She has led Working America since its founding in 2003.[30]

Nussbaum is listed as Working America’s executive director, receiving a total reportable and estimated compensation package of $103,279 from it and “related organizations.”[31]