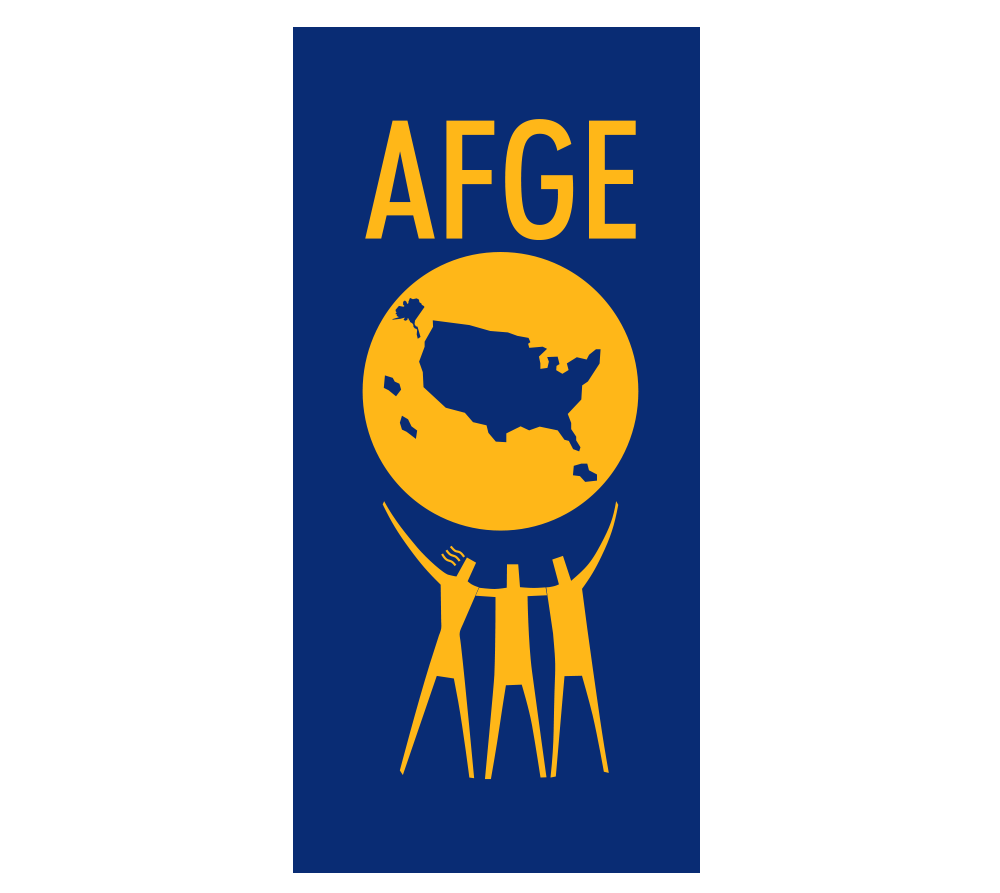 The American Federation of Government Employees (AFGE) is the largest federal worker union with over 300,000 members.[1] Affiliated with the AFL-CIO union federation since its founding, AFGE collectively bargains for federal employees and lobbies against any privatization efforts.[2][3][4] Over recent years, AFGE has faced a string of controversies, including having dozens of its officers convicted of corruption charges.[5]

AFGE is headquartered in Washington, D.C., and represents employees in every federal agency as well as employees of the District of Columbia Government.[6][7] With particular concentration in the Department of Veterans Affairs (VA), the Social Security Administration (SSA), the Department of Defense (DOD), and the Department of Justice (DOJ), AFGE membership includes border patrol agents, police officers, lawyers, nurses, and other occupations.[8]

The union represents 700,000 workers, including around 320,000 dues-paying members.[9][10] (By law, federal employees subject to a collective bargaining agreement are not required to be union members or pay dues to a labor union.) These numbers include around 18,000 retired members.[11] Bucking a broader trend toward declining union membership in the United States, AFGE has increased its membership by around 20,000 in the past four years and by over 100,000 since 2002.[12]

AFGE has nearly 400 employees and boasts over 1,000 local chapters and 12 district offices throughout the United States, predominantly on the East Coast and in the Midwest. [13][14][15] These district offices each have their own vice presidents who sit on the National Executive Council along with the National President—currently Jeffrey David Cox, Sr.—and the National Vice President for Women and Fair Practices—currently August Y. Thomas.[16][17]

From its founding in 1932, AFGE has been nationally affiliated with the AFL-CIO or its predecessor labor federations.[18] AFGE made a historically rare move and voted in 1997 for every single one of its 1,100 local chapters to affiliate with the state federations of the AFL-CIO, bringing every part of AFGE firmly in line with the international union.[19] Both AFGE president Cox and vice president Thomas remain “active participants” in the AFL-CIO.[20] AFGE won a big victory when President John Kennedy signed Executive Order 10988 in 1962 allowing federal employees to collectively bargain with federal departments.[21]

AFGE negotiates dozens of contracts each year with the federal government, predominantly through regional and local branches of federal agencies like the Department of Veterans Affairs or the U.S. Army Corps of Engineers.[24]

In the 2016 election cycle, AFGE-associated political committees and AFGE employees contributed around $1.3 million to Democrats and around $102,000 to Republicans. [25] During that election cycle, AFGE endorsed Hillary Clinton for President over her opponent on the Democratic Party presidential primary, U.S. Senator Bernie Sanders, who actively competed for union endorsements.[26]

Outside of lobbying members of Congress on behalf of their membership,[28] AFGE engages in a variety of campaigns to “fight the [Trump] Administration’s privatization agenda and assault on the rights of federal employees.”[29] This includes providing phone scripts for its members to call U.S. Senators and Representatives to advocate for hiring more employees at the VA and Transportation Security Administration (TSA), paid parental leave legislation, federal pay raises, and “official time,” whereby union members are paid by their government employer (namely the taxpayer) even while working full time for their union. [30]

AFGE has been described as the most corrupt union in America, leading the nation in criminal misconduct investigated by the Department of Labor for several years running.[31] In the first eight months of 2017 alone, 11 AFGE officials pled guilty to or were convicted of corruption offences, vastly outpacing the postal unions with six convictions and the National Federation of Federal Employees with one conviction. In 2017, 60% of the criminal corruption offenses of federal sector unions reported on the Labor Department’s Criminal Enforcement webpage were committed by AFGE, as of the beginning of August.[32]

AFGE found itself at the center of the Department of Veterans Affairs (VA) scandal that came to light in 2014 wherein dozens of veterans died waiting for care while thousands more endured multi-month long wait times for service—wait times that VA employees allegedly covered up.[36] Subsequent investigations found excessive wait times and poor conditions at VA conditions across the United States.[37]

Reports revealed that employees across the scandal-plagued VA system were working full time for AFGE under a practice known as “official time,” including four employees in Baltimore, Maryland, one in Wilmington, Delaware, three in Tuscon, Arizona, and one in Massachusetts.[38] AFGE union members in the VA were also accused of using official time to compile a “management hit list” allegedly at the request of VA Secretary Bob McDonald.[39] The list contained nearly three dozen VA managers the union members wanted to have removed from the agency.[40]

Even at a time when AFGE officials were being paid full government salaries from the VA while working for the union, AFGE President Cox claimed the main problem at the VA was understaffing.[41] President Cox later said at an AFGE rally in Washington, D.C., that if he meets “one more politician who tells me we need to tighten our belts, I’m going to take my belt off and I’m going to whoop his ass.”[42]

AFGE subsequently resisted any reforms that would allow veterans to access non-VA health care when faced with unacceptable wait times at the VA, with union president Cox claiming that “such a move could jeopardize the quality of patient care.”[43]

AFGE has publicly defended official time, claiming without evidence that official time is used to “enhance working conditions,” “[improve] workplace safety,” and “protect employees from discrimination on the basis of race, gender, age, sexual orientation, and other factors.”[44] The union added that official time “saves taxpayer money by helping resolve workplace conflicts as early as possible.”[45]

However, the Competitive Enterprise Institute found not only that five AFGE officials found guilty or indicted for criminal activity were on official time, but also that the use of official time across the federal government comes at a great cost to taxpayers.[46] In FY 2012 alone, for example, official time cost over $157 million as federal employees spend nearly 3.5 million hours working for their unions.[47]

In 2017, AFGE’s National Executive Council almost unanimously decided to remove then-Secretary-Treasurer Eugene Hudson Jr. after he was “found guilty on the basis of internal charges in connection with his use of AFGE staff and email for campaign or personal purposes.”[49] Hudson claimed that he was “removed for political reasons” in retaliation for investigating abuses of the union’s expense accounts by senior leadership as well as for his plans to run against Cox.[50] Hudson claimed to be targeted because he was an “outspoken critic of how AFGE President J. David Cox and other members of the NEC have spent AFGE money for personal use, including family vacations to the Virgin Islands.”[51]

Since his removal from AFGE, Hudson challenged the dismissal from the organization in a federal district court, which ordered AFGE to reinstate Hudson near the end of 2017. AFGE challenged that court’s decision and won, allowing the union to remove Hudson from office again. The legal battle may not be finished because “Hudson’s lawsuit against his ouster still has remaining counts the court must decide.”[52]

Near the end of 2018, AFGE encountered internal political mayhem as president J. David Cox Sr. “dismissed four elected officials of the union’s Department of Labor unit.” The dismissal was a result of “allegations of improper expenditures and failure to honor the votes of members.” An $18,000 event at the Hyatt Regency is one of the alleged expenditures being called into question. However, the deposed officials questioned the procedures that Cox followed to remove them as well as the possible motive behind removing Alex Bastani, who was rumored to be considering a second run for national union office. [53][54]

David Cox is the President of AFGE, elected for his second three-year term in 2015.[55] President Obama appointed Cox to serve on the Federal Salary Council, an advisory body to the executive branch to provide recommendation on federal employee pay.[56] Cox is a member of the AFL-CIO Executive Council and chairs the AFL-CIO’s Union Veterans Council.[57] Cox earns a salary of $289,059.[58]