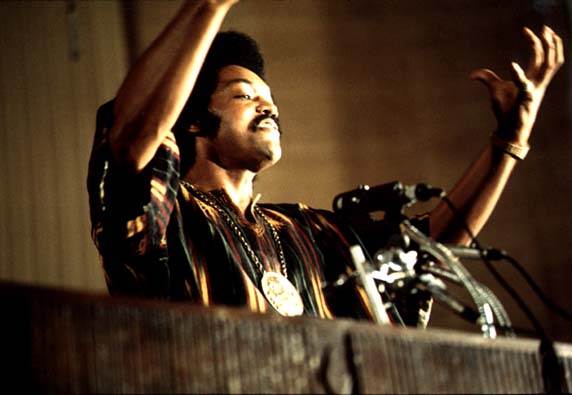 The Rainbow PUSH Coalition is a left-wing activist organization that promotes a wide variety of left-of-center causes. Left-wing activist and former Presidential candidate Jesse Jackson created the coalition in 1996 when he merged two of his projects: Operation PUSH (People United to Save Humanity), founded in 1971, and the National Rainbow Coalition, founded in 1984. The organization’s headquarters is in Chicago, with additional offices in New York, Detroit, Atlanta, Houston, Los Angeles, Oakland, and Washington, D.C. [1]

Rainbow PUSH founder Jesse Jackson started out as the Chicago organizer for Operation Breadbasket, a project of the Southern Christian Leadership Conference (SCLC), a civil rights organization created in the 1950s and led by Martin Luther King, Jr.. Operation Breadbasket organized boycotts of businesses opposed to integration and supported businesses owned by African Americans. After King was assassinated in 1968, Jackson clashed with the SCLC’s new president Ralph Abernathy over control of the organization and the civil rights movement as a whole. Abernathy attempted to move Jackson and his staff to Atlanta, closer to the SCLC headquarters, but was unsuccessful. [3]

SCLC leadership accused Jackson of using his position in the organization for personal gain and suspended him in 1971. In response, he resigned and founded a new group in Chicago, called Operation PUSH, to promote African-American self-help initiatives. In 1984, Jackson launched the National Rainbow Coalition (NRC). [4] NRC opposed the Reagan administration’s defense and economic policies, while advocating for more foreign aid and domestic spending. [5] The term “rainbow coalition” originally referred to an alliance between African-American, white, and Hispanic radical groups in the 1960s and 1970s, and some African-American activists have criticized Jackson’s refusal to give credit to the original Rainbow Coalition. [6] Jackson merged his two organizations into Rainbow PUSH in 1996.

Jackson has a track record of making inflammatory statements about companies that allegedly discriminate against ethnic minorities and organizing boycotts of those companies. In some cases, the condemnations and boycotts have benefited Jackson, his family, and his organizations. Jackson has won concessions in the form of tens of millions of dollars in donations from corporations he has boycotted and secured jobs for his family members and associates with some of those companies. [7]

In the 1980s, Jackson and Operation PUSH led a boycott of Anheuser-Busch, the brewing company which produced Budweiser and other major beer brands. A decade later, two of Jackson’s sons, one of which currently sits on the board of Rainbow PUSH, acquired Anheuser-Busch’s largest distributorship in Chicago. [8]

In 1998, Jackson supported the merger of two banks, Citibank and Travelers, even as many civil rights groups opposed it. Citicorp then donated $50,000 to Jackson’s Citizenship Education Fund, a division of Rainbow PUSH, and Travelers donated an additional $100,000. The same year, Jackson announced that he opposed the merger of the telecommunications companies SBC and Ameritech, but switched his position a year later and endorsed the merger. Jackson’s organizations had reportedly received $500,000 from the companies. At the same time, SBC had to sell half of its business so that regulators would approve the merger, and Jackson secured a partnership in the deal for investment firm Georgetown Partners. This firm had never done any previous work in the telecommunications industry, but its owner was Chester Davenport, one of Jackson’s key allies. In 1999, GTE and Bell Atlantic merged to form Verizon. As with the Citibank-Travelers merger, many activist organizations opposed the deal, but Jackson supported it. The Citizenship Education Fund received $1 million from the two companies, and Verizon later contributed $300,000 to fund Rainbow PUSH conventions. [9]

In 2001, Jackson targeted technology companies, claiming they did not hire enough minorities. When TJ Rodgers, CEO of Cypress Semiconductor, pushed back and said that Silicon Valley did not discriminate, Jackson announced that “we can now officially describe Cypress Semiconductor as a white supremacist hate group.” In turn, Rodgers accused Jackson of “running a scam for his own benefit.” [10]

In 2001, details of a relationship between Jackson and a Rainbow PUSH employee came to light. Jackson, who is married and had five children at the time, had a child with Karin Stanford, the former head of the Rainbow PUSH Washington office. The organization released documents showing that Stanford received $15,000 to cover moving expenses and $21,000 for consulting services during the affair. [11]

Rainbow PUSH stood behind Jackson and encouraged him to return to the organization after a leave of absence. Rainbow PUSH vice president James Meeks called Jackson’s statement about his affair “swift” and “responsible,” and said the organization’s board would not “accept any thought of resignation or pullback.” Meeks said the board was “excited” about Jackson coming back and claimed that the moving expenses and other payments sent from Rainbow PUSH to Jackson’s mistress were actually severance pay. [12]

In 2006, an African-American woman falsely accused several white members of the Duke University men’s lacrosse team of raping her at a party where she was working as a stripper. Although DNA tests on all 46 white players on the team failed to match any of the evidence, Jackson announced that Rainbow PUSH would pay for the woman’s college tuition regardless of the outcome of the case. [13]

In 2008, the National Legal and Policy Center, a right-leaning watchdog group, filed a complaint with the IRS over issues with Jackson’s Citizenship Education Fund’s tax returns. Peter Flaherty cited discrepancies such as failing to list any consultants, despite spending over $1 million in consulting fees, and letting Jackson use organizational funds for personal use. The complaint suggested that Jackson was using his organization “more like a fee-for-service consulting business” than a charity. Jackson’s press secretary Keiana Peyton dismissed the accusations and said that the fund’s “books are clean and we are open.” [14]

In 2011, former Rainbow PUSH employee Tommy Bennett filed a wrongful termination and harassment complaint against Jackson and Rainbow PUSH. Tommy, who is gay, alleged that Jackson made him escort women to Jackson’s hotel rooms and clean up after their sexual encounters. He also described being forced into intimate situations with Jackson. Bennett said that the organization blamed a lack of funds when it laid him off, but hired someone to replace him shortly afterwards. Rainbow PUSH denied the allegations. [15]

Jackson broke with many African-American leaders during the Black Lives Matter-associated civil unrest in the summer of 2020, denouncing “pillaging, robbing, and looting” in Chicago and calling it “humiliating, embarrassing, and morally wrong.” Chicago Black Lives Matter organizer Ariel Atkins responded to his statement, saying that Jackson “has nothing to do with Black Lives Matter” and “can keep his opinions to himself.” [16]