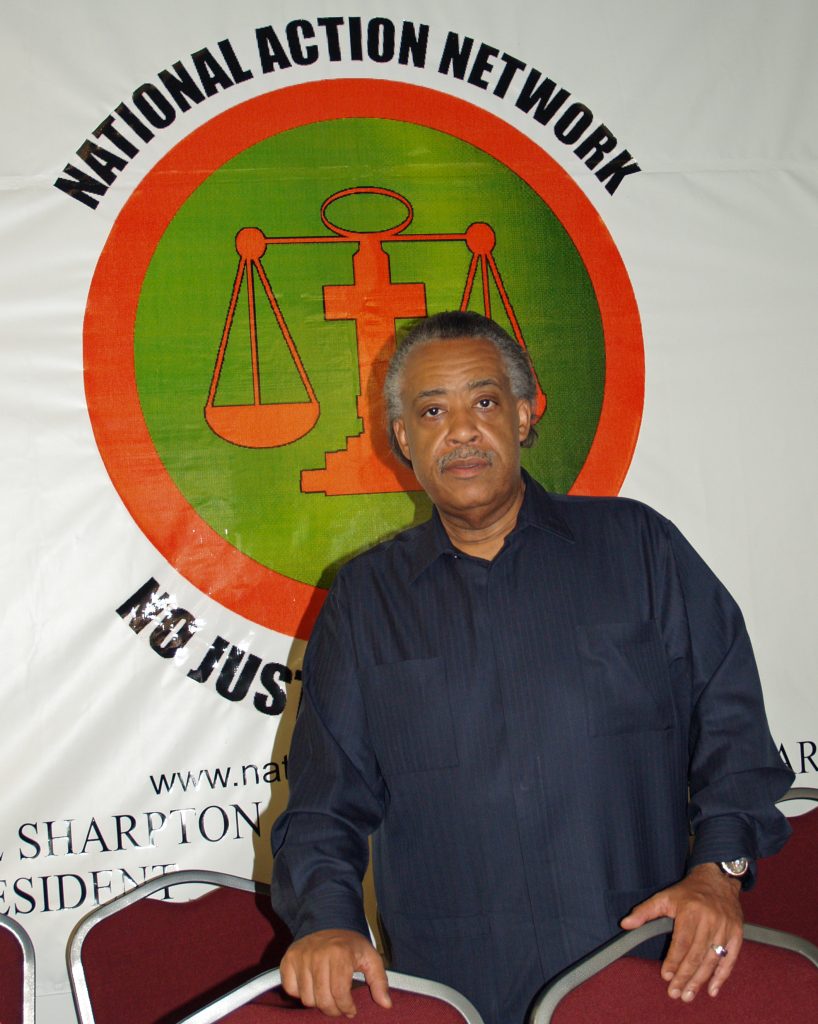 The National Action Network (NAN) was founded in 1991 by controversial MSNBC commentator, left-of-center activist, and former Democratic politician Al Sharpton. Since its creation, NAN has been used to promote Sharpton’s left-wing agenda.

NAN’s finances were the point of legal issues for years. Sharpton has used NAN to finance his luxurious lifestyle of first-class travel to private school for his daughter. Meanwhile, NAN incurred millions in unpaid taxes and bills. [2] NAN has twice paid Sharpton in excess of $400,000 in recent years, once as a bonus and once for the rights to Sharpton’s life story. [3] [4]

When NAN was founded in 1991, Sharpton had risen to national notoriety activism during the 1980s and his controversial involvement in the Tawana Brawley rape hoax case. [5] NAN and Sharpton would go from controversial fringe group in their early days to having a seat in corporate board rooms today. [6] NAN has become an integral organization for America’s left-wing, with it serving as a supporter and platform for Black Lives Matter, the Women’s March, and Democratic Party politicians. [7] [8]

President Barack Obama kept close ties to NAN throughout his time in elected office. In 2007, then-Senators Obama and Hillary Clinton spoke at NAN’s annual convention as part of their efforts to gain Sharpton’s endorsement for the 2008 Democratic presidential primary. [9] President Obama and then-Democratic National Committee Chairman Tim Kaine went on Sharpton’s radio show just days before the 2010 midterm election to boost Democratic turnout. [10] In 2011, President Obama was the keynote speaker at the NAN convention. [11] Obama told members of NAN, “because you made our campaign your own, because you believed in our ability to shape our own destiny, we won that chance to bring about real change.” [12] During his remarks, the president championed the passage of Obamacare, increased regulations on businesses, and bailouts. Obama returned to speak at the convention once again in 2014. [13]

Following the 2018 election, NAN hosted its Legislative and Policy Conference on Capitol Hill. Attendees discussed gun control and their disapproval of laws protecting the integrity of elections. [17] Senators launching a 2020 campaign were once again lined up for the event with Kamala Harris (D-CA), Cory Booker (D-NJ), Elizabeth Warren (D-MA), and Amy Klobuchar (D-MN) all in attendance. Sharpton told Democratic officials, “We cannot keep telling people in our community to come out and vote and then we don’t know what the agenda is and what is going to be accomplished. Voting rights, healthcare – particularly pre-existing conditions – criminal justice reform, where are we on these issues and what are you going to do?”[18] Sharpton went onto say, “Particularly as Republicans maintain their hold on the Senate and the White House, it’s more important than ever to use this opportunity to drive home the urgency of our agenda.” [19] Sharpton’s comments to Democratic elected officials make it clear that the goal of NAN is to support a left-wing agenda. Speaker Nancy Pelosi (D-CA) echoed this when she told NAN “Thank you for helping take back America” referring to her party’s takeover of the House of Representatives in the 2018 election. [20]

Prominent Democrats made appearances at the 2019 Martin Luther King Jr. Day breakfast hosted by NAN. Former Vice President Joe Biden, an honoree at the event, spoke about “systemic racism” that he claimed white Americans ignored. [21] He went onto blamed President Trump for facilitating a rise in racism. [22] Other speakers at the event included D.C. Mayor Muriel Bowser (D-DC) and former Mayor of New York Michael Bloomberg. [23]

For decades NAN’s finances have been the subject of legal scrutiny. In the 1990s, NAN loaned money to Sharpton’s for-profit business Revals Communications. That loan was used to pay for Sharpton’s daughter’s private school tuition in spite of the fact that nonprofits are prohibited from making loans to its officers under New York state law. [25]

In 2001, NAN paid $70,000 toward a judgement for Alton H. Maddox Jr., a co-defendant in a case with Sharpton. [26] Since the payment strictly benefitted a single person, tax lawyers who spoke to the New York Times claimed the IRS could have revoked NAN’s nonprofit status. [27]

NAN found itself picking up the tab for portions of Sharpton’s 2004 Presidential campaign. The Federal Election Commission found that NAN assumed costs totaling $181,115 that the campaign should have paid. [28] At the same time, NAN was found to have hundreds of thousands of dollars in unpaid office rent and hotel bills.

NAN’s finances were in such disrepair that in 2006 it owed $1.9 million in federal taxes. [29] NAN’s accountant claimed that “the nonpayment of payroll tax obligations,” along with loans from Sharpton, were responsible for keeping the group afloat. [30] Due to the financial crunch, Sharpton took no salary from 2006 to 2008. However, starting in 2009, Sharpton began collecting a $250,000 salary even as the organization still owed $1.1 million in overdue payroll taxes. [31] Sharpton’s large salary and first-class travel while NAN still owed back taxes is the type of behavior that a Treasury Department inspector general described as “abusive” or “potentially criminal” if failure to pay taxes was deliberate. [32]

In 2016, Sharpton received a one-time bonus of $437,555 from NAN, bringing his total compensation for the year to $687,555. [33] NAN’s revenue for the year was $5.817 million, meaning Sharpton’s compensation totaled almost 12 percent of the budget. NAN claimed the bonus was justified due to Sharpton previously not taking a salary some years and to make up for the fact that the organization does not offer him a retirement package. [34]

In 2018, NAN paid Sharpton $531,000 for the rights to his life story. Linda Sugin a Fordham University Law School professor said, “When I see this kind of thing, it just makes me roll my eyes because there’s so much potential for funny business.” [35] Daniel Borochoff, the president of CharityWatch, said that the transaction would have seemed more above board if Sharpton had sold his life story rights and donated anything above $531,000 to NAN. [36]

In July 1991, City College of New York professor Leonard Jeffries gave a speech laced with anti-Jewish conspiracy theories and slurs against prominent Jewish public officials. [37] Rather than condemn Jeffries anti-Semitic remarks, Sharpton and other African-American community leaders came to Jeffries defense. [38] Less than a month after Jeffries speech, Sharpton said “If the Jews want to get it on, tell them to pin their yarmulkes back and come over to my house.” [39]

Some credit Sharpton’s comment and actions with contributing to the anti-Jewish Crown Heights Riots of August 1991. [40] On August 19, a car from the motorcade of Rebbe Menachem Mendel Schneerson was hit by another car and veered onto the sidewalk where it struck two African-American children, Gavin and Angela Cato. Gavin died. Yosef Lifsh, the driver of the car, was attacked by a crowd that had gathered when he got out of the car. [41] An ambulance from a Hasidic-run ambulance service arrived, along with two Emergency Medical Service ambulances, and a police officer told the Hasidic ambulance to take Lifsh to the hospital. [42]

A riot broke out starting on August 19 that would last for three days. A 29-year-old Australian Jewish scholar, Yankel Rosenbaum, was killed on the first night. [43]

Sharpton became involved on the second day of the riot. On the third day of the riot, Sharpton lead a march from which some protestors broke off and burned the Israeli flag outside Lubavitch headquarters. [44] During the riots signs featured phrases like “Hitler didn’t do his job,” and mobs chanted “kill the Jews.” [45] At Gavin Cato’s funeral on August 26th, Sharpton referred to the Hasidic ambulance as “an apartheid ambulance service” and Crown Heights Jews as “diamond merchants.” [46] When a grand jury did not indict Lifsh, Sharpton accused District Attorney Charles Hynes of being a “tainted prosecutor” due to his connections to the Hasidic community. [47]

Even today, NAN says it was a leading advocate for the Cato family. [48] Sharpton would later admit that “Our language and tone sometimes exacerbated tensions and played to the extremists.” [49]

In 1995, Sharpton came to the defense of Record Shack, a black-owned record shop in Harlem. Sharpton accused Freddy’s Fashion Mart, a Jewish-owned store, of attempting to evict Record Shack. [50] In fact, Freddy’s Fashion Mart leased the space from the black church United House of Prayer for All People and subleased the space to Record Shack. Due to an increase in rent, Freddy’s was forced to increase Record Shack’s rent. [51] Sharpton accused Freddy’s of racism and proclaimed, “We will not stand by and allow them to move this brother so that some white interloper can expand his business.” [52] A black gunman would later enter Freddy’s, begin shooting, and set fire to the store, killing seven employees in what the New York Police Department called “racial arson.” [53]

In 2018, NAN joined Black Lives Matter and the New Black Panther Party in supporting Nation of Islam leader Louis Farrakhan following anti-Semitic comments. Then-U.S. Representative Todd Rokita (R-IN) introduced a resolution to condemn Farrakhan “for promoting ideas that create animosity and anger toward Jewish Americans and the Jewish religion.” [54] The resolution referred to Farrakhan’s speech on February 25, 2018 in which he said “White folks are going down. And Satan is going down. And Farrakhan, by God’s grace, has pulled the cover off of that Satanic Jew and I’m here to say your time is up, your world is through” and his past statements claiming Judaism to be a “deceptive lie” and a “theological error.” [55] NAN joined a lobby effort to stop the condemnation of Farrakhan for “alleged racist and anti-Semitic statements.” [56]

NAN’s counts many large corporations among its financial supporters including AT&T, Viacom, Walmart, Comcast Corporation, McDonald’s, Coca-Cola, Home Depot, the NBA, Verizon, Macy’s, NASCAR and, Best Buy. [57] Sharpton has used what Peter Flaherty, president of the National Legal and Policy Center in Virginia, a corporate watchdog, said was “quite clearly a shakedown operation” to secure corporate funding for NAN. [58] Between 2003 and 2006, Sharpton threatened boycotts against General Motors, Chrysler, and American Honda. Within a year of each threat, all three companies began to donate to NAN and sponsor the organization’s events. [59]

In 1998, Sharpton attacked Pepsi and Macy’s for not portraying African-Americans in their advertising and talked of boycotting the brands. Sharpton cashed in with Pepsi hiring him as a consultant for $25,000 a year and Macy’s began funding NAN’s annual conference. [60] In 2015, a lawsuit alleged that companies pay or reward NAN and other civil-rights groups for supporting their business endeavors. [61] The lawsuit claimed that NAN and other groups supported the Comcast and Time Warner Cable merger because they received rewards from the companies. While the lawsuit was dismissed, some people’s suspicions were raise when just seven months after Comcast purchased NBC, Sharpton received a show on MSNBC and a more than $750,000 contract. [62]

Tamika Mallory, co-president of the Women’s March was the former executive director of NAN. [63]

Another NAN alumnus, Janaye Ingram, was the head of logistics for the Women’s March. [64]

Melvin ‘Skip’ Alston, who serves on NAN’s board of directors, is a Democratic county commissioner in Gilford County, North Carolina. [65]

The Democratic mayor of Windfall, North Carolina, Fred Yates, is also a NAN board member. [66]