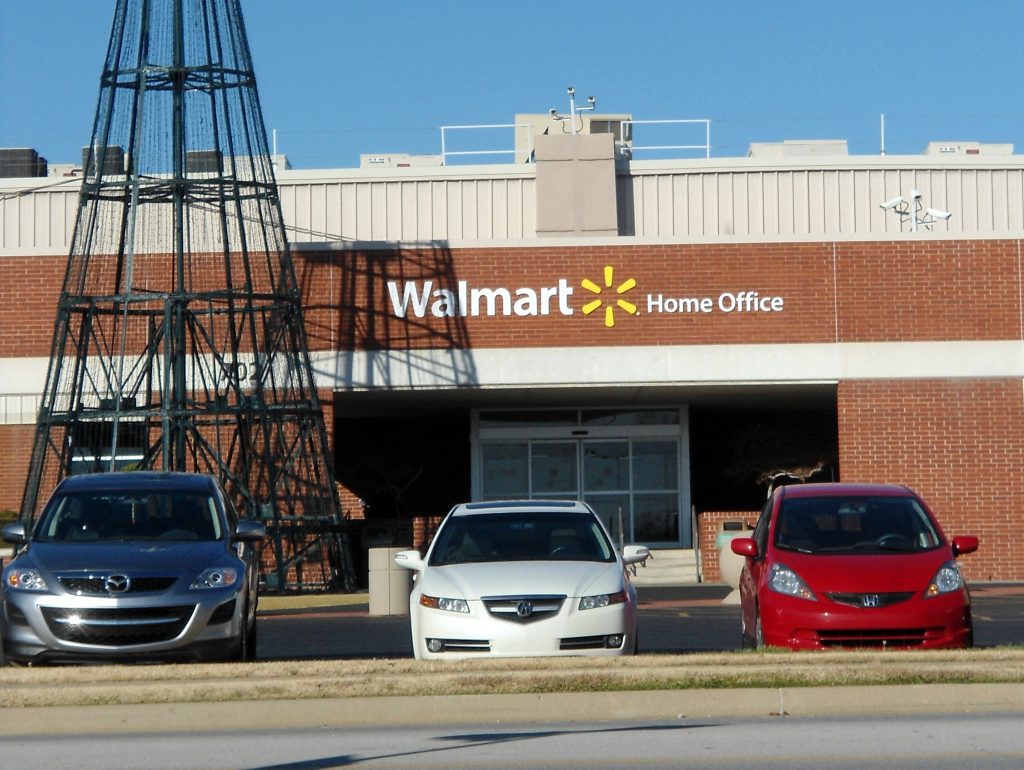 Walmart is a multinational retail company founded in 1962 by Sam Walton. The company is headquartered in Bentonville, Arkansas, and operates over 10,000 big box retail stores and discount clubs in the United States and an online retail website. Walmart is the largest company in the world in terms of revenue, grossing over $550 billion in 2020, and ranks number one on the 2021 Fortune 500. The company is also the largest employer in the world and employs over 2.3 million individuals. [1]

The company has historically faced criticism for its employment and environmental records from left-leaning advocacy groups and labor unions, though it has announced multiple pay raises for U.S.-based employees as well as other environmentalist initiatives. [2] [3]

The company’s charitable arm, the Walmart Foundation is among the largest private foundations in the United States and has contributed billions of dollars to various charities and advocacy groups, many being politically left-leaning advocacy organizations. [4]

The first Walmart store was opened by founder Sam Walton in 1962 in Rogers, Arkansas. Walton had previously operated a five-and-dime store in Bentonville, Arkansas, and opened Walmart with the intention of focusing on providing low prices to customers in rural areas. [5] The company’s competitors from its founding were existing retailing giants such as Kmart and Sears. The company grew rapidly in its early years and went public in 1970. It continued its rapid growth in subsequent decades, during which it introduced discount club Sam’s Club as well as Walmart Supercenters, which combined a big box retailer with a grocery store. The company reached $1 billion in annual sales in 1980, making it the fastest company to do so at that time. By 1990, Walmart had become the largest retailer in the United States with its rapid growth credited to its consistently low prices. In 1991, the company opened its first international outlet, a Sam’s Club in Mexico City. [6]

Sam Walton died in 1992, shortly after receiving the Presidential Medal of Freedom from President George H.W. Bush. Following Walton’s death, his son Rob Walton became chair of the Walmart board. [7] The years following Sam Walton’s death also marked a shift in the company’s corporate strategy away from its traditionally frugal roots and taking on greater corporate debt. [8]

In 2002, Walmart became the largest company in the world and as of 2021 has held either first or second place on the Fortune 500 list in all subsequent years. [9]

As of 2021, Walmart is the largest company and employer in the world with over 2.3 million employees and over $550 billion in annual sales and is the top ranked company on the Fortune 500. During the COVID-19 pandemic the company capitalized on its online sales channels and existing curbside pickup and delivery programs with online shopping up 79% nationally. [10]

Currently approximately half of Walmart stock is held by seven members of the Walton family including the living heirs of Sam Walton and his late brother Bud Walton. The family is the wealthiest in the world according to Forbes Magazine and has contributed billions to both left and right-leaning organizations, charter schools, and other charities through the Walton Family Foundation and has also provided tens of billions to fund employee raises. [11]

Walmart has historically faced criticism from organized labor and left-leaning advocacy organizations over its employment policies. Left-leaning critics of Walmart point out that the company historically paid minimum wage or close to it and focused on hiring part-time employees that also collected government benefits. Critics also point to the company’s lower costs causing suppliers to cut corners. [12]

Walmart has substantially raised wages for its employees, and in 2021, the company announced that all of its employees would earn at least $13 per hour and up to $19 per hour based on cost of living. The move brought a quarter of Walmart’s U.S. workforce up to $13 an hour and made the average starting wage at the company $15 per hour. The company’s support of higher minimum wages is reflective of companies paying workers more to gain a market advantage. [13]

Throughout 2020, Walmart gave its hourly workers a total of $2.8 billion in bonuses to help offset hardships endured by the COVID-19 pandemic. The bonuses took the form of several rounds of $300 bonuses for full-time employees and $150 for part-time employees. Left-leaning critics of Walmart, including the Brookings Institution, continued to criticize the company when it announced its end-of-year holiday bonus for not raising its internal minimum wage above $11 hourly which the company did just a few months later. [14]

Walmart has also received criticism from democratic socialist U.S. Senator Bernie Sanders (I-VT) on multiple occasions including when the company overhauled its time-off policy in 2019 to provide employees with six extra days of paid time off for emergencies and illnesses. Sanders attacked Walmart for not providing more for employees, one of many attacks the Senator regularly launches at large companies like Walmart and Amazon. [15]

As the largest private employer in the United States, Walmart has long been a target of organized labor. Labor unions’ efforts to organize the company’s workers have been historically unsuccessful, with multiple attempts by the United Food and Commercial Workers International Union (UFCW) ending in votes against unionization or withdrawal of the organizing campaign. Labor unions blame Walmart’s labor relations department for providing talking points against unionization. [16]

In light of its failure to unionize Walmart stores through traditional means, the UFCW formed OUR Walmart, now known as United for Respect, as a union front group in 2010 to further pressure the company into unionization. The organization held “wildcat” walkouts at stores involving a very small number of employees and engaged in practices Walmart alleged were illegal including staging protests at the homes of Walmart executives. Walmart was granted restraining orders against OUR Walmart and the project ultimately failed and was mostly defunded by the UFCW in 2015. [17] [18]

Walmart supports many left-leaning public policy priorities including rejoining the Paris Climate Agreement and has also established a Center for Racial Equity within the company. The company also has policies around left-leaning Environment, Social, and Governance (ESG) investing and Diversity, Equity, and Inclusion. [19]