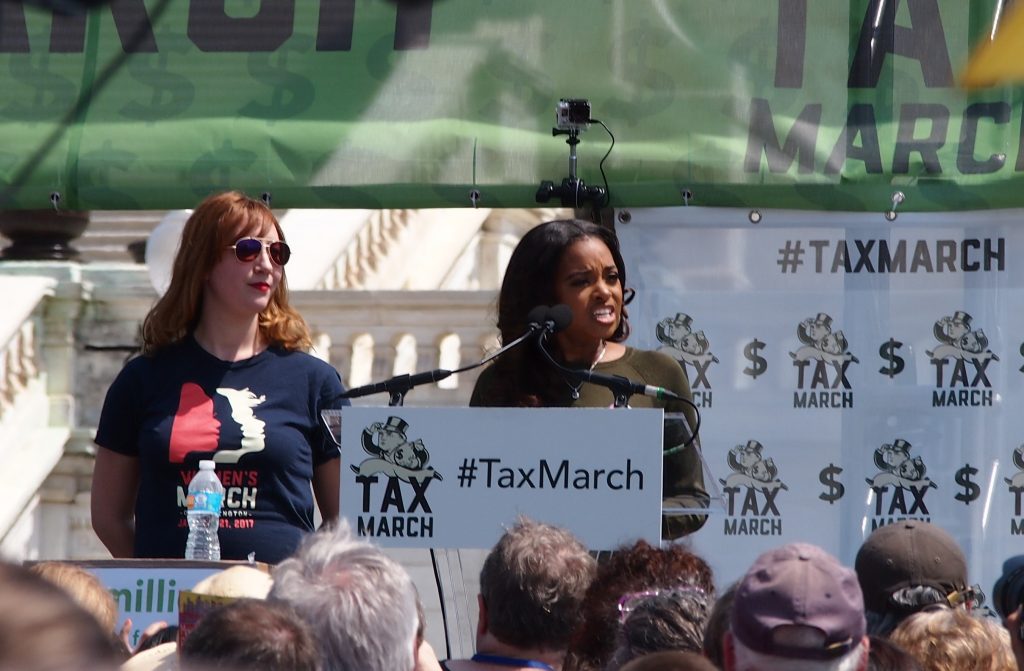 Tamika D. Mallory is the co-president of Women’s March, Inc., one of two major national left-wing advocacy organizations that were created from the January 21, 2017 “Women’s March on Washington” and related demonstrations against the election and inauguration of President Donald Trump. From 2009 to 2013 she was executive director of controversial activist, Democratic politician, and MSNBC commentator Al Sharpton’s National Action Network.[1]

Mallory has a longstanding association with Nation of Islam leader Louis Farrakhan,[2] identified as the nation’s “leading anti-Semite” by the left-leaning Anti-Defamation League,[3] and has frequently used her social media accounts to praise him[4] and his words.[5] Mallory attended a February 2018 Farrakhan speech that was infused with numerous slurs against Jews, and promoted the event in real time on social media.[6] Her refusal to apologize for praising and associating with Farrakhan has caused local affiliates of Women’s March, Inc., to disassociate themselves from the national organization.[7]

Similarly, shortly before Mallory was to be the keynote speaker at a June 2018 event in Australia, the organization cancelled her appearance following protests from Jewish groups regarding two recent statements by Mallory. After returning from a trip to Israel, Mallory declared the founding of the State of Israel in 1948 a “human rights crime.”[8] Two months earlier, she had accused the Anti-Defamation League of “CONSTANTLY attacking black and brown people.”[9]

She is critical of the involvement of white women with Women’s March, Inc., because they “create tension and confusion” when they “have trouble stepping aside and not being the center of attention.”[10]

In July 2019, Mallory, Linda Sarsour, and Bob Bland stepped down from the board of Women’s March due to controversy surrounding Mallory’s ties to anti-Semitic black nationalist Louis Farrakhan and accusations of financial mismanagement. [11]

Tamika Mallory was one of four national co-chairs of the January 21, 2017 “Women’s March on Washington” and is the co-president of Women’s March, Inc., one of two major national left-wing advocacy organizations that were created from that event and related demonstrations against the election and inauguration of President Donald Trump.

From 2009 to 2013 she was executive director of the National Action Network (NAN), a left-wing civil rights advocacy organization founded by controversial New York City activist, Democratic Presidential primary candidate, and MSNBC commentator Al Sharpton.[12] Both of Mallory’s parents were founding members of the organization; she joined its youth wing at age 11 and began working for NAN at age 15.[13]
Mallory is an advocate for Black Lives Matter,[14] was a gun control policy advisor to former Vice President Joe Biden,[15] served on the transition committee for New York City Mayor Bill de Blasio, and was a national organizer for the 50th Anniversary of the March on Washington.[16]

Mallory has associated with the black nationalist extremist group Nation of Islam (NOI) for most of her life, writing in March 2018 that her parents took her to NOI meetings when she was “a little girl,” and that she began “attending on my own” following the murder of her son’s father 17 years earlier.[17]
On February 25, 2018, Mallory attended a Chicago speech given by NOI leader Louis Farrakhan, which included numerous derogatory swipes at Jewish people. In his speech, Farrakhan denounced the “Jewish controlled media,” called Jews “children of the devil” and members of the “synagogue of Satan,” and blamed Jews for the “degenerate behavior in Hollywood turning men into women and women into men.”[18]

Ms. Mallory posted an Instagram photo promoting the event and received a favorable reference from Farrakhan during his speech.[19] She and other Women’s March, Inc., board members had portrayed themselves in the past as Farrakhan allies.[20]

Mallory and Women’s March, Inc., received significant public criticism from allies and Jewish organizations following the February 25, 2018, Farrakhan speech. While no formal attempt at an explanation was made by Women’s March, Inc., for more than a week, Mallory engaged with critics on social media about the matter. Appearing to echo a longstanding anti-Semitic trope, she said in a Twitter post: “If your leader does not have the same enemies as Jesus, they may not be THE leader!”[21] (Mallory later denied that “enemies” referred to Jewish people.[22]) Nine days after the incident, a statement from Women’s March, Inc., explained: “Minister Farrakhan’s statements about Jewish, queer, and trans people are not aligned with the Women’s March Unity Principle.”[23]

The statement did not satisfy the Rhode Island chapter of the Women’s March, which stated in May 2018 that it was disassociating with the national organization that continued to stand behind Mallory and that had “refused to hear us saying that they needed to address their own anti-Semitism.”[24] Similarly, in July 2018 a Women’s March affiliate in Vallejo, California, announced it would remove its support for the national organization if a more firm denunciation of Farrakhan was not forthcoming from Women’s March, Inc., and Mallory.[25] The lack of a swift apology led Alyssa Klein, an employee of Women’s March, Inc., and one of the organizers of the January 2017 Women’s March on Washington, to announce her resignation from the organization.[26]

The 2018 Founder’s Day controversy was not the first instance of Mallory hailing Farrakhan or the Nation of Islam publicly. “Thank God this man is still alive and doing well. He is definitely the GOAT [greatest of all time]. Happy Birthday @louisfarrakhan!,” Mallory said in a May 11, 2017, Instagram post, featuring a photo of Farrakhan with his arm around her.[27]

A February 2016 Instagram post showed a photo of Farrakhan speaking at an event in Detroit, with a Mallory caption reading: “The Honorable Minister Louis Farrakhan just stepped to the mic for #SD16DET… I’m super ready for this message! #JUSTICEORELSE #ForTheLoveOfFlint.”[28]

In addition to her associations with the anti-Semitic Nation of Islam leader Louis Farrakhan, Mallory has made a number of statements which have been criticized as hostile to Jewish interests.

In June 2018, following a trip to Israel sponsored by the left-wing Center for Constitutional Rights, Mallory stated that the founding of Israel in 1948 had been a “human rights crime.”[29]

“It’s clear you [Israelis] needed a place to go — cool, we got that. I hear that,” she said, according to the Jerusalem Post. “But you don’t show up to somebody’s home, needing a place to stay, and decide that you’re going to throw them out and hurt the people who are on that land. And to kill, steal, and do whatever it is you’re gonna do to take that land.”[30]

These statements and Mallory’s behavior regarding Louis Farrakhan earlier in the year led to complaints from Jewish groups in Australia to the Victorian Council of Social Service in Melbourne, which had planned for Mallory to be their keynote speaker later in June 2018. The Victorian Council cancelled Mallory’s appearance.[31]

Attacks on the Anti-Defamation League

During April 2018, Mallory accused the left-leaning Anti-Defamation League (ADL) of racial bias. The ADL had been enlisted by Starbucks to assist the company in a nationwide sensitivity training, following a controversy that had arisen when a Philadelphia store manager called police on two black men in the store. The ADL, originally formed to counter anti-Semitism, presents itself as a leader in anti-bias education; Starbucks had also sought guidance from the NAACP Legal Defense and Education Fund and former U.S. Attorney General Eric Holder.[32]

Mallory condemned the company’s selection of the Jewish organization as one of its training groups. “Starbucks was on a decent track until they enlisted the Anti Defamation [sic] League to build their anti-bias training,” said Mallory in a Twitter statement calling for a boycott of Starbucks. “The ADL is CONSTANTLY attacking black and brown people.”[33] In follow-up comments she stated: “The ADL sends US police to Israel to learn their military practices. This is deeply troubling. Let’s not even talk abt [sic] their attacks against [email protected]”[34]

Support for the Castro Regime

Following the November 25, 2016 death of Cuban communist dictator Fidel Castro, Mallory made several sympathetic and supportive statements.
“RIP Comandante! Your legacy lives on!” she said in a November 26, 2016, Instagram post.[35] Further explaining her point, she added:[36]

“Under Fidel Castro’s leadership, Cuba engaged in Pan-African solidarity struggle with countless African countries seeking to break the chains of colonialism and supported revolutionary Black American leaders persecuted by the US government. From Lumumba to Malcolm to Assata. From Angola to South Africa to Zambia to Palestine to Mozambique. Yes, he was deemed an enemy of our state, but he was by no means an enemy of our people and struggle.”

The same day, Human Rights Watch, an international non-governmental organization that conducts research and advocacy regarding human rights, provided their analysis of Castro’s legacy, which began as follows:[37]

“During his nearly five decades of rule in Cuba, Fidel Castro built a repressive system that punished virtually all forms of dissent, a dark legacy that lives on even after his death. During Castro’s rule, thousands of Cubans were incarcerated in abysmal prisons, thousands more were harassed and intimidated, and entire generations were denied basic political freedoms.”

At public events and in interviews since the Women’s March, Mallory has been critical of white women who wish to be allies of her movement. In a February 2018 interview she expressed distrust of white women joining her cause because they vote the wrong way:

“We’re not really interested in hearing white women talk about how much they want to work with us, and how much they want to be allies, and how much they appreciate us, and all those great things. We don’t want to hear that, because we continue to see — in places like Alabama — and as we approach the State of the Union, we’re dealing with a megalomaniac as president of this country and white women are largely to blame for that. They are largely the cause of it. White women have been voting the wrong way.”[38]

She also criticized white women within her movement of causing problems, allegedly because they are threatened by leadership from women of color and want to be the center of attention:[39]

“And even within the Women’s March space, we have situations where, when women of color attempt to lead, white women are threatened by our leadership and create tension and confusion because they are unable to step aside and allow women of color to not just lead, but create space that will ultimately impact the lives of all people. They have trouble stepping aside and not being the center of attention.”

The pilot of an American Airlines flight due to leave Miami for New York City on October 15, 2017, ordered Mallory removed from his aircraft, allegedly for belligerency towards the flight crew. This followed a dispute regarding a seat assignment between Mallory and the gate agent prior to boarding. Mallory asserted the pilot’s “white male aggression” was the reason for her removal and stated she was being singled out for “#FlyingWhileBlack.”[40]
Another version of events was told by a passenger who contacted Heavy.com, a New York City-based news website. The traveler provided the airline’s email confirming they were on the same flight with Mallory, and said Mallory was “rude before she boarded the plane,” was “loudly yelling at the stewardess, who was clearly distraught and nearly in tears,” that the pilot was “protecting his colleague” and that other passengers were “thrilled to have her escorted off.”[41]
Another person claiming to have been a passenger on the same flight challenged the account Mallory was posting to social media, telling her “you were screaming f-bombs at the staff in front of kids” and that “everyone cheered when you left.”[42]