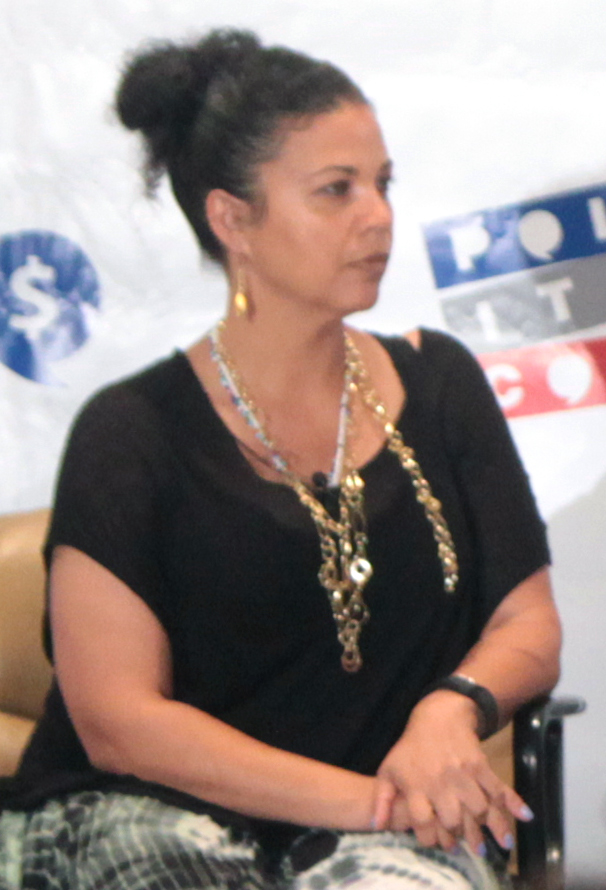 Melina Abdullah is a university professor and a co-founder of Black Lives Matter Los Angeles who has been credited as one of the leading early activists in the Black Lives Matter movement. Through BLM LA, Abdullah has led public opposition against the Los Angeles Police Department since 2016, resulting in numerous protests and arrests. She has faced criticism for alleged antisemitism, including her support for Nation of Islam leader Louis Farrakhan.

Melina Abdullah was born in East Oakland. Her father was a union organizer and Trotskyite. [1] Her mother was a teacher who volunteered in a school breakfast program run by the Black Panther Party. Her paternal grandfather was a well-known Jewish-German Marxist economist who joined Communist efforts to oppose the rise of Adolf Hitler. [2]

Also in 2002, Abdullah became a professor and chair of Pan-African studies at California State University, Los Angeles. Her authored articles and chapters include “Capitalistic Hands around My Throat: Corporate Control and the Erosion of Hip Hop’s Womanist Roots” and “Hip Hop as Political Expression.” [6]

Abdullah has also been on the boards of the Black Community, Clergy, and Labor Alliance (BCCLA); California Faculty Association-Los Angeles; Los Angeles Community Action Network (LA-CAN); and the National Association for Ethnic Studies. [7]

From 2014-2018, Abdullah served on the Los Angeles County Human Relations Commission where she held hearings on police conduct and played a key role in replacing Columbus Day with Indigenous People’s Day as a county holiday. [8]

Melina Abdullah was an early and prominent organizer and activist in the Black Lives Matter movement. In 2013, she started Justice for Trayvon Martin, a group which would eventually become known as Black Lives Matter LA. The group often battled former Los Angeles Police Department chief Charlie Beck who allegedly shielded numerous officers from prosecution after accusations of unlawful use of force against Black individuals. [9]

Abdullah led BLM L.A. in a series of high-profile protests against the LAPD, including a seven-day tent encampment outside the LAPD headquarters, a 54-day encampment outside city hall, and an encampment at Windsor Square. The group had numerous disputes with police chief Beck at police commission hearings, with some leading to arrests. [10]

Abdullah has been arrested at least three times for charges related to protesting. In May 2016, she was arrested on suspicion of resisting a peace officer; in 2017, she was arrested for refusing to disperse from a protest; and in 2018, she was charged with eight criminal misdemeanor counts. In the third incident, Abdullah was accused of being an accomplice to Sheila Hines-Brim, the aunt of a Black woman who died in an LAPD holding cell in 2016, allegedly by suicide. Hines-Brim attended a police commission meeting with Abdullah, and the former threw a powdery white substance that may have been her niece’s ashes at then-police chief Beck. Abdullah potentially faced up to a year in prison, and was defended by a student of Johnnie Cochran, but all charges were eventually dropped. [11] [12]

In late 2017, Abdullah and BLM L.A. endorsed “Black Xmas,” a call to boycott white-owned stores for the holiday season. [13]

In 2020, Abdullah led a protest to the home of Jackie Lacey, the first Black female district attorney of Los Angeles County. Lacey’s husband confronted the protesters with a gun at his front door. Lacey later said her family felt they were in imminent danger. [14]

In a 2020 virtual town hall meeting, Abdullah was asked how her proposed police reforms (centered on defunding the police and shifting to social workers to respond to certain situations) would benefit Los Angeles residents who wanted more law enforcement and didn’t support BLM. Abdullah responded: “If you do not support BLM, you’re revealing who you are. How can you not support BLM? It’s telling about who you are, it’s telling about your ethics.” [15]

When asked about whether an individual should call the police if they feel threatened by a homeless person, Abdullah said: “Why are people calling police for people not having homes? That is a crime of society… Most of the people who are unhoused are wonderful people. Do you know who are scary? White folks who call the police are scary. Police are scary.” [16]

Abdullah has been the victim of three reported “swatting” incidents, in which a hoaxer makes a false report of violence at a residence to provoke an aggressive police response, the latest of which as of early 2022 took place in September 2021. [17]

In 2016, Melina Abdullah was named in a lawsuit that was filed after protests led to the cancellation of a speech at Cal State Los Angeles by conservative pundit Ben Shapiro. Abdullah had tarred Shapiro, who is an Orthodox Jew, as a “Neo-Nazi” and “neo-KKK member.” [18]

Melina Abdullah supported Louis Farrakhan, the antisemitic leader of the Nation of Islam, who has referred to Jews as “termites” and has favorably referenced Adolf Hitler. [19] In May 2019, she Tweeted in defense of Farrakhan after he was banned from Instagram and Facebook for “black supremacy.” [20]

In December 2021, Abdullah issued a “Statement Regarding the Ongoing Trial of Jussie Smollett,” in which she wrote that “[i]n our commitment to abolition, we can never believe police, especially the Chicago Police Department (CPD) over Jussie Smollett, a Black man who has been courageously present, visible, and vocal in the struggle for Black freedom.” She continued, writing that “policing at-large is an irredeemable institution,” and that “[p]olice lie and Chicago police lie especially.” [21]