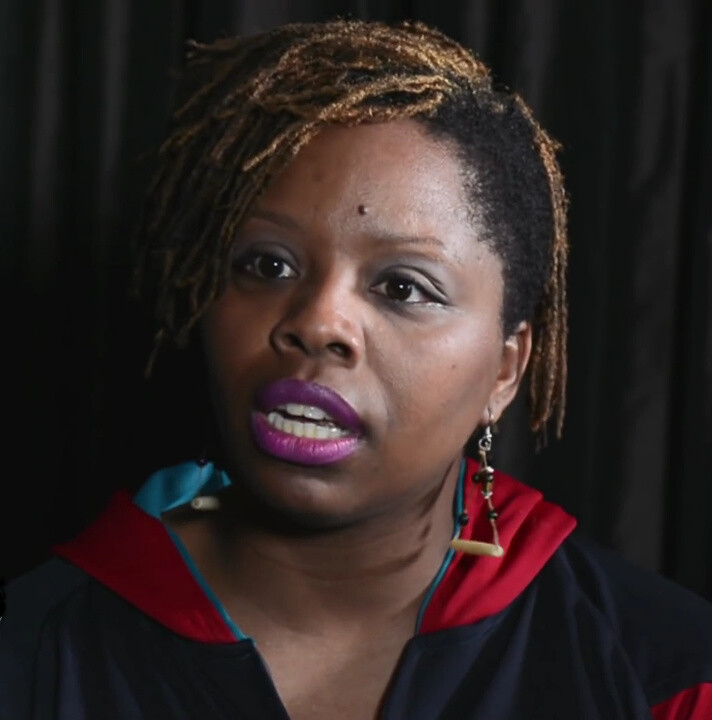 Cullors has compared President Donald Trump to Adolf Hitler. [5] She has also called the United States the “the world’s greatest perpetrator of war and the most extensive purveyor of human rights atrocities at home.” [6] In 2020, Cullors co-endorsed Senators Bernie Sanders (I-VT) and Elizabeth Warren (D-MA) in the Democratic Party’s Presidential primary elections. [7]

In May 2021, Cullors announced that she was stepping down from the BLM Global Network Foundation. [10] Cullors’ abrupt resignation came weeks after the Daily Caller News Foundation reported that she had used funds she received for future activist projects to enrich herself and her family instead.  [11]

Cullors grew up in Pacoima, a low-income community in Los Angeles, California. Her father and brother were jailed at various points in her life, an experience Cullors has credited as “That really shaped my understanding of what it meant to be black in this city.” [12]

As a teenager, Cullors was kicked out of her home after coming out to her parents as queer. [15] She also identifies as polyamorous. [16] In 2016, she married Janaya “Future” Kahn, the black, queer, and gender-non-conforming co-founder of Black Lives Matter Canada. [17] [18]

Cullors’ political activism began when she was 17 years old and joined the Southern California-based Bus Riders Union (BRU), a campaign group that advocates for fare freezes and environmentalist regulations on mass transit in Los Angeles. [19] [20] She says, “The Bus Riders Union was my first political home. It’s a place that trained me to be the organizer I am today.” [21]

BRU is a project of the Labor Community Strategy Center (LCSC), a radical-left organization “with deep historical ties to the long history of anti-colonial anti-imperialist pro-communist resistance to the U.S. empire [sic].” [22] Cullors attended the LCSC’s National School for Strategic Organizing training program; she has said that the program taught her “from Marx, to Lenin, to Mao, learning all types of global critical theory.” [23]

Cullors has referred to LCSC’s founder Eric Mann as her “mentor.” [24] Mann is a former member of the Weather Underground, a domestic terror organization. [25]

Cullors is a co-founder of the #BlackLivesMatter social media movement and the Black Lives Matter Global Network Foundation. In 2013, her acquaintance Alicia Garza posted what came to be known as “A Love Letter to Black People” on Facebook after George Zimmerman was acquitted on criminal charges for the 2012 shooting death of Trayvon Martin. [26] In the post, Garza wrote, “I continue to be surprised at how little Black lives matter.” [27]

Cullors responded to the post with the hashtag “#BlackLivesMatter.” As the hashtag spread on social media, Garza and Cullors decided to build a campaign and reached out to immigration activist Opal Tometi for assistance building an online platform. [28]

According to a report by the Center for Media and Social Impact at American University’s School of Communication, the #BlackLivesMatter hashtag was rarely used before July 2014. [29] The Ferguson, Missouri protests in the wake of the death of Michael Brown, who was killed while rushing at a police officer, became the catalyst for the hashtag’s proliferation on social media. [30]

The Black Lives Matter Global Network Foundation is the organizational structure created by Garza, Cullors, and Tometi after the Ferguson protests. All three women are listed as “co-founders” on the Blacklivesmatter.com website, which also serves as the organization’s homepage. [31] In July 2020, Cullors became the executive director of the BLM Global Network Foundation. [32] The Foundation was originally sponsored by the Thousand Currents grant-making organization, but now operates under the umbrella of the Tides Center. [33] [34] One of the Foundation’s key aims is to “disrupt the Western-prescribed nuclear family structure.” [35]

Cullors co-endorsed Senators Bernie Sanders (I-VT) and Elizabeth Warren (D-MA) in the 2020 Democratic Presidential Primary. She explained her opposition to Obama administration Vice President Joe Biden because of his “old guard mentality” and was part of the “old establishment” of the Democratic Party. In an MSNBC interview, Cullors said, “We need all hands on deck right now for progressives to join the movement to make sure that we don’t get people like Mike Bloomberg, people like Biden into the president’s office.” [36]

In 2015, Cullors discussed the ideological foundation behind the Black Lives Matter movement in an interview. Referencing Garza, she said, “The first thing, I think, is that we actually do have an ideological frame. Myself and Alicia in particular are trained organizers. We are trained Marxists. We are super-versed on, sort of, ideological theories.” [37]

In a 2017 interview in the Los Angeles Times, Cullors claimed that the Black Lives Matter movement would refuse to meet with President Donald Trump for the same reasons it would refuse to meet with Adolf Hitler. She said, “Trump is literally the epitome of evil, all the evils of this country — be it racism, capitalism, sexism, homophobia.” She also said that her answer to Trump is to “resist him and to resist every single policy that he’s implemented that impacts our communities.” According to Cullors, Trump “literally tried to kill our communities, and is killing our communities.” [38]

In a 2019 article written for the Harvard Law Review, Cullors called the United States “the world’s greatest perpetrator of war and the most extensive purveyor of human rights atrocities at home and abroad.” In the article, she promotes the concept of “abolition” as the remedy for “global U.S. state violence, injustice, and devastation.” Cullors defines this “abolition” as “a praxis that roots itself in the following principles: people’s power; love, healing, and transformative justice; Black liberation; internationalism; anti-imperialism; dismantling structures; and practice.” [39]

In 2020, Cullors led the “Yes on R” ballot initiative campaign in support of Measure R in Los Angeles County. [40] The proposed measure called for the expansion of subpoena powers for the Sheriff Civilian Oversight Commission in order to “investigate Sheriff-related issues, compel production of records and witnesses.” [41]

Los Angeles County Sheriff Alex Villanueva (D) opposed the measure saying it “will open the floodgates for many more ill-advised lawsuits designed to seek documents that are not legally available for public release.” [42] The measure passed. [43]

In December 2020, Politico reported that ten local chapters “are severing ties with the Black Lives Matter Global Network” over the manner in which Cullors became executive director of the Black Lives Matter Global Network Foundation.[44] In an open letter, these ten chapters alleged that “Patrisse Cullors, as the sole board member of BLMGN, became Executive Director against the will of most chapters and without their knowledge.”[45]

In 2019, Reform L.A. Jails, a prison reform group led by Black Lives Matter co-founder Patrisse Cullors, spent nearly $26,000 at two Malibu beach resorts according to campaign finance records. The organization spent $10,179 for “meetings and appearances” at the Calamigos Guest Ranch and Beach Club in Malibu, California, and $15,593 at the Malibu Conference Center. [46]

In April 2021, it was revealed that Cullors had purchased a $1.4 million home in an upscale area outside of Los Angeles, her fourth home purchase since 2016 totaling $3.2 million. After the purchase, rumors surfaced that she had also shown interest in properties in other countries, but there are only records for what she owns domestically. Cullors faced criticisms for owning and actively pursuing more multi-million-dollar properties despite being a self-proclaimed Marxist, which people argued negates her ideological positioning. [47]

In May 2021, Cullors announced that she was stepping down from the BLM Global Network Foundation. Cullors stated that she was turning her focus to personal projects, such as the release of her second book and a TV development deal she signed with Warner Bros. [48]

Cullors’ abrupt resignation came weeks after the Daily Caller News Foundation reported that she had used funds she received for future activist projects to enrich herself and her family instead. The Foundation reported that Cullors used her position to funnel money from the BLM Global Network Foundation to an art company led by the father of her child. Cullors has lived a live of luxury since co-founding BLM, purchasing four homes across the country for a total of $3.2 million since 2016. [49]

In February 2022, after several states ordered the BLM Global Network Foundation to cease fundraising, Cullors lashed out at reporters investigating her tenure as the organization’s Executive Director. In an interview with Morehouse College, Cullors said the idea that she had acted with impropriety was “incredibly anti-black and sexist,” and claimed that she and other leaders at the organization had sustained “collective trauma” from the intense scrutiny by various journalists. [50]

Cullors went on to claim that she was “being targeted because [she’s] part of a long legacy of civil rights workers and human rights leaders,” and that she had “never done anything illegal.” Later on, however, she acknowledged that BLM Global Network Foundation had not always been transparent about its finances and stipulated that the organization did not “go out and solicit the money,” rather that the money “came from white guilt, white corporation guilt, and they just poured money in.” [52]

Comments on the Form 990 and Nonprofit Transparency

At an April 2022 event hosted by the Vashon Center for the Arts in Washington, Cullors spoke about the transparency required of nonprofit groups on the Form 990, a publicly available tax document disclosing financial and other information that nonprofits must file with the IRS every year. Her comments came amid significant public scrutiny directed at the Black Lives Matter Global Network Foundation over its finances and lack of transparency, including the delayed filing of its own Form 990.[53]

Acknowledging that “I actually did not know what 990s were before all of this happened,” Cullors remarked that “this doesn’t seem safe for us, this 990 structure – this nonprofit system structure. This is, like, deeply unsafe. This is being literally weaponized against us, against the people we work with.” She described hearing the term “990” as “triggering,” and noted that “if [an] organization and the people in it are being attacked and scrutinized at everything they do, that leads to deep burnout, that leads to deep, like, resistance and trauma.”[54]